The First Battle between Steamships:

The end of the Age of Fighting Sail was a process that straggled through the 1820s and 30s and 40s as steam power became increasingly reliable. The last full fleet action with sailing vessels was the Battle of Navarino in 1827, when combined British, French and Russian squadrons annihilated an entire Ottoman Turkish fleet. This victory was decisive in securing Greece’s independence from her Turkish overlords. Britain’s last major action involving sailing vessels – albeit with steamships also present – was to follow thirteen years later with bombardments of Egyptian positions on the Lebanese coast in 1840. Steamships were introduced to all the major navies in the decade that followed but it was not until 1853 that one steamship would face another in combat. The location for this “single-ship action” was to be off the Black Sea coast of Turkey and was to involve Russian and Turkish vessels, Vladimir and Pervaz-i-Bahri respectively. 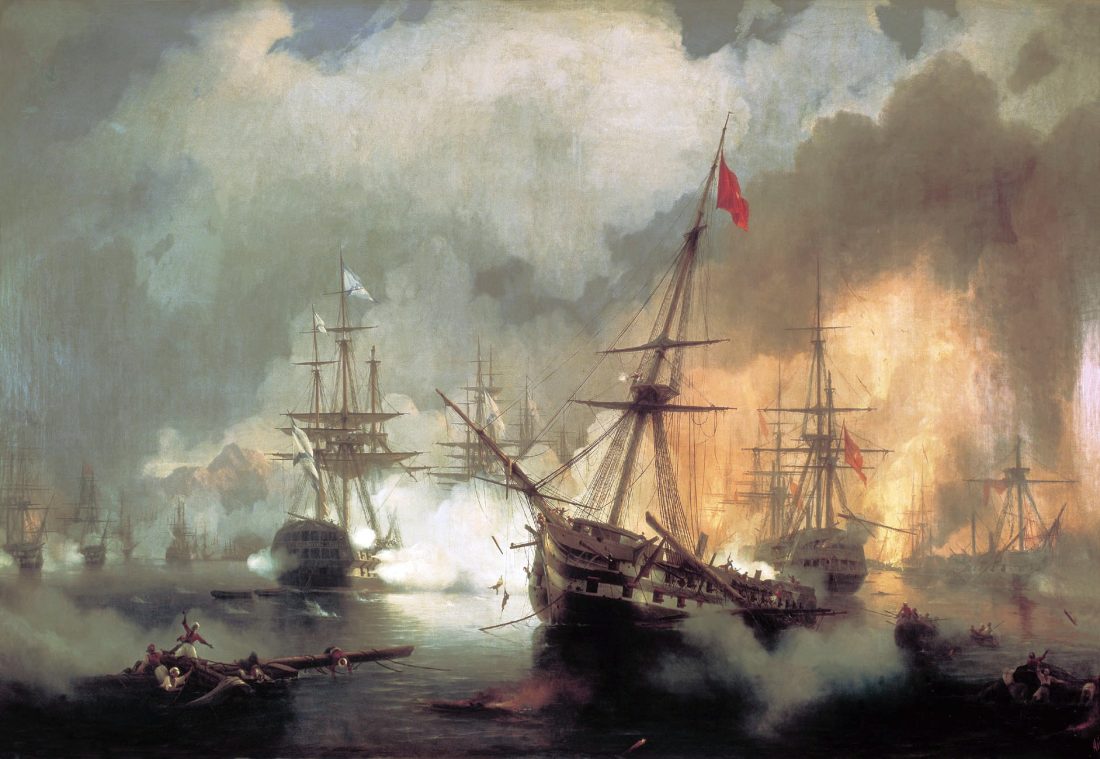 Battle of Navarino, 1827, by Ivan Aivazovsky

A constant of Russian history from 1568 to 1918 was a steady stream of wars with Ottoman Turkey – twelve in all in this long period. The common feature was a southward push by the Russian Empire, capturing land in the Crimea, Ukraine and the Caucuses which were previously under Ottoman Rule. New states – Greece, Serbia, Rumania and Bulgaria – were to gain independence with Russian support I the nineteenth century and in 1878, in the eleventh of these wars, Russian forces were to penetrate to the suburbs of Constantinople/Istanbul. (The background to Britannia’s Wolf by Antoine Vanner) It is with the tenth conflict however which we are concerned here. This war began in 1853 over an obscure argument as to who should protect Christian Holy Places in Jerusalem, and initially involved only Russia and Turkey directly. Early in the following year Britain, France and Piedmont were to be drawn in and when peace was finally negotiated in 1856 the terms were to be very unfavourable to Russia. 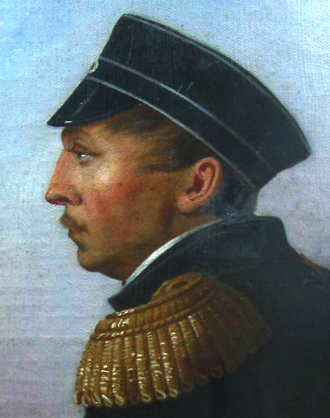 This outcome was not however foreseen in late October 1853, when Turkey declared war on Russia. The Russians responded by sending a sailing squadron of her Black Sea Fleet under Admiral Pavel Nakhimov (1802 – 1855)  to operate off the northern Anatolian coast to harass Turkish naval movements. The other area of Russian concentration was off the commercially-important mouths of the Danube and of the Bosporus. This duty was allocated to a squadron of steam frigates, six of which had been constructed in London for the Russian Navy between 1843 and 1848 – a commentary on the still poorly-developed nature of Russian industry. Paddle-driven, and thus very vulnerable to enemy fire, these vessels were reported as carrying ten guns (calibre uncertain), some of which were mounted as bow and stern chasers, a fact that was to prove critical in combat. This squadron was commanded by Fleet Vice-Admiral Vladimir Kornilov (1806- 1854) who flew his flag – most appropriately – in the frigate Vladimir. This vessel was commanded by the up and coming Captain-Lieutenant Grigori Butakov (1820-1882). 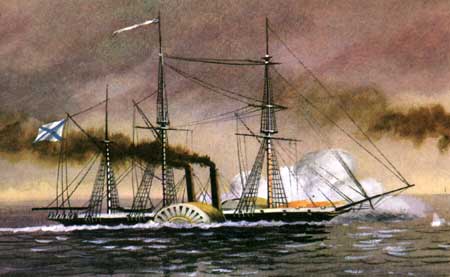 In early November Kornilov shifted his operations to the Anatolian coast to link up with Nakhimov. On the morning of 5th November the Vladimir, apparently alone, or at least out of sight of other Russian vessels, spotted the smoke of a ship apparently heading northwards. Vladimir gave chase and the unknown vessel tried to escape. Her speed was inadequate however and when the Vladimir caught up with her she was revealed to be an Ottoman steam frigate, the Pervaz-i-Bahri. The two enemies were more or less equally matched as regards armament – but with one important difference. The Pervaz-i-Bahri carried her guns on broadside only. 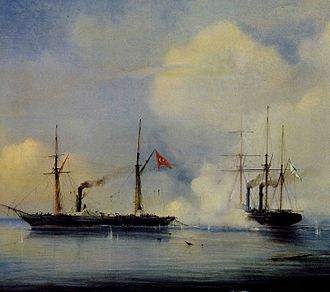 Battle was joined. The sea conditions appear to have been relatively calm and for the first time ever in ship-to-ship combat considerations of weather-gauge were irrelevant as regards manoeuvre. No sails were set and steam power was independent of wind. The fact that the Vladimir had overhauled her quarry was an indication of higher speed and this, combined with the Turkish lack of bow or stern-chasers, was to prove decisive. Butakov’s speed allowed him to keep his ship astern of the Turk, so as to be able to rake her unmercifully along her axis. Any attempt by the Pervaz-i-Bahri to bring her broadside guns to bear was frustrated by the Vladimir’s ability to remain in her blind-spot. The Turkish frigate’s steering gear was soon damaged, as were her bridge and several of the guns. The last straw was when the Vladimir moved in close to sweep the Pervaz-i-Bahri’s decks with grapeshot and her colours came down in surrender. The battle had lasted some three hours.

The disparity in the butcher’s bills confirmed just how effective the Vladimir’s tactics had been. Her casualties amounted to two dead and three wounded by comparison with 58 lost on the Pervaz-i-Bahri, including her commander. Badly damaged, the Turkish frigate was brought to the Russian base at Sevastopol, where she promptly sank. Raised again, she was taken into Russian service under the name Kornilov. 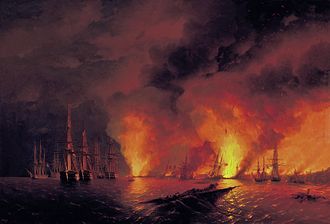 The Battle of Sinope, by Ivan Aivazovsky 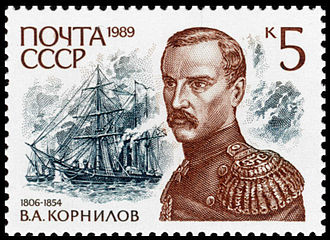 The Valdimir’s victory was the prelude to one yet greater. Reinforced with further vessels, and with guns loaded with new and deadly explosive shell, Nakimov descended on an Ottoman squadron outside their Black Sea base at Sinope on November 30th. He had six sailing ships-of-the-line, two sailing frigates and three steam frigates to the Ottomans’ seven sailing frigates, three sailing corvettes and three steam frigates. The result was a massacre, the explosive shells wreaking havoc that the Ottomans, with their solid-shot weapons, could not match. All twelve Ottoman vessels were either destroyed or run aground in frantic efforts to escape. The Russian victory was absolute, but it was to be counterproductive. From that moment on British and French involvement was inevitable if Russian ambitions to control the Bosporus, Dardanelles and the Eastern Mediterranean were to be frustrated.  Russia had won the battle but had drawn upon herself a war she could not win.

And what of the ships involved?

Both the Vladimir and the newly-named Kornilov were scuttled in Sevastopol at the end of the war – trapped there, like other Russian warships, by the blockade imposed by the Royal Navy. They had provided sterling service during its siege, which was to be the central feature of the Crimean War. No less tragic was the fate of the Russian Admirals Nakhimov and Kornilov. Both died heroically in Sevastopol’s defence against  British, French, Turkish forces. Only Butakov was to survive the war, dying as a widely-respected Admiral and mine-warfare innovator in 1882.

The Dawlish Chronicles – now up to nine volumes, and counting. Click on banner below for details.