Some three years ago I was visiting Malaysia, arriving via Penang, the island off Peninsular Malaysia’s west coast that’s now home to a city of 1.5 million and is linked to the mainland by two bridges, one of them 15 miles (24 Kms) long. Penang owed its development as a British trading and military base to an adventurer called Francis Light, of whom I hadn’t previously heard. It was due to his efforts in the late eighteenth century Penang became Britain’s first foothold in South East Asia, a counter to the strong trading position previously established in the region by the Dutch East Indies Company (the Vereenigde Oostindische Compagnie, or “VOC”), in the seventeenth century. 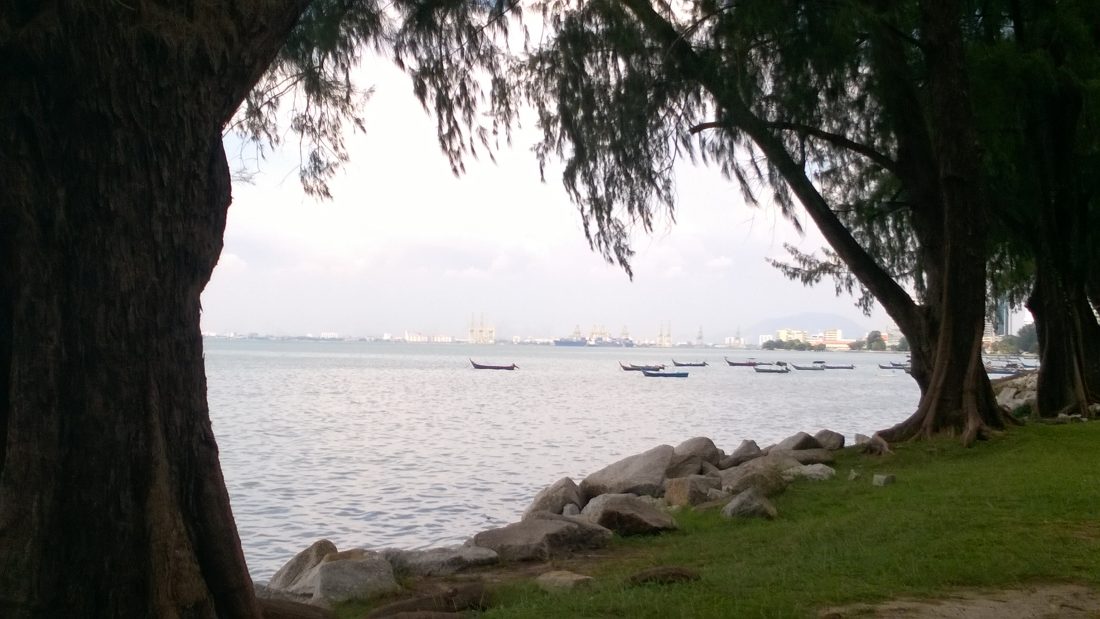 Looking out across Penang harbour today

The foundation of Penang was the second British attempt to establish a trading presence in the region – the Dutch already had a strong position in much of what is today Indonesia, and had control of important way-stations leading there, some valuable in their own right in trading terms, at the Cape of God Hope, Ceylon (modern Sri Lanka) and Mauritius. In the seventeenth century the VOC was powerful enough to bring British trading ambitions in the area to an end.  By the third quarter of the eighteenth century the balance of power had however shifted. Dutch global power was in decline and the VOC was ultimately to go bankrupt. By the British power was, by contrast, on the rise, with its presence in India being consolidated and extended through its own East India Company, still a private venture but one which until the mid-nineteenth century would maintain its own army. By the 1780s thoughts were once again turning towards extension of British trading interests further east. 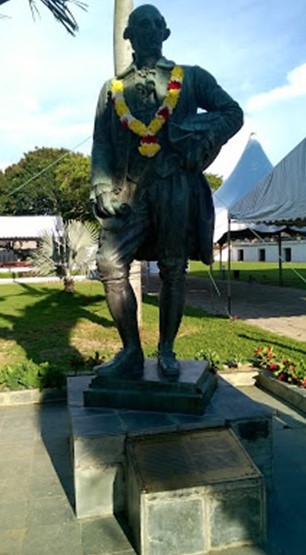 It is often said that Britain acquired an empire by accident – usually as a result of private and often officially-unendorsed initiatives by figures such as Lord Clive and Cecil Rhodes. Francis Light (1740-1794) was cast in the same mould. Probably illegitimate, the interest of a “patron” secured him an appointment as a midshipman in the Royal Navy, but in 1763 he decided to seek his fortune in India, and within two years was operating as a private trader – an opportunity that could lead to enormous riches. The opportunities Light saw were not however confined to the Sub-Continent alone and he recognised the potential of filling the gaps left by steady Dutch decline further east. By 1771, he was proposing establishment of a trading post on Penang Island, off the Malay coast as a “convenient magazine for the Eastern trade”. The proposal was rejected by the East India Company but Light, who continued to prosper, did not give up on the idea.

In 1786, in a joint venture between the private company Light was associated with, and the East India Company, Light landed on Penang’s east coast, at the site of what is today’s large city and took  formal possession of the island “in the name of His Britannic Majesty, King George III and the Honourable East India Company”. The formal basis for the annexation was that the Sultan of Kedah – the local ruler – ceded the island in exchange for is military protection from Siamese and Burmese enemies. In the best tradition of the British merchant-adventurer Light had gone far beyond his authorisation however – the East India Company’s new governor-general, Charles Cornwallis, was not prepared to support the Sultan against any of his enemies, whether Siamese, Burmese or Malay. Light had concealed this fact but by the time the Sultan tried to recapture the island in 1790 Light was too well established to be ejected. The Sultan backed down and agreed to the ceding in return for an annual honorarium. Even today the State of Penang still pays the honorarium to the current Sultan of Kedah. 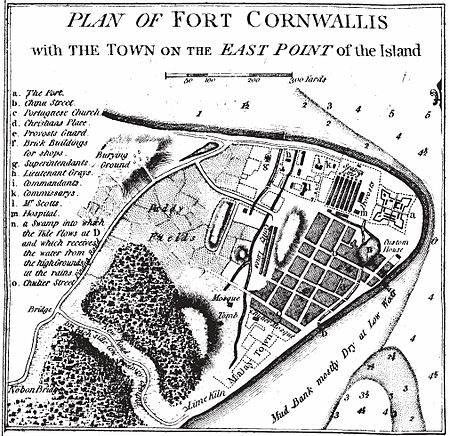 Light now established Penang as a free port to entice traders away from nearby Dutch trading posts and it grew in importance as such until it was finally eclipsed by the more favourably-situated settlement at Singapore, further south, in the mid-nineteenth century. Light also promoted settlement on Penang, promising immigrants as much land as they could clear and, according to one story, shooting silver coins from cannons into the forest to spur their efforts to clear it. Malaria remained the greatest challenge however and Penang, like other tropical settlements, especially in West Africa, achieved the dubious honour of being classed as “a white man’s grave”. Light himself succumbed in 1794. 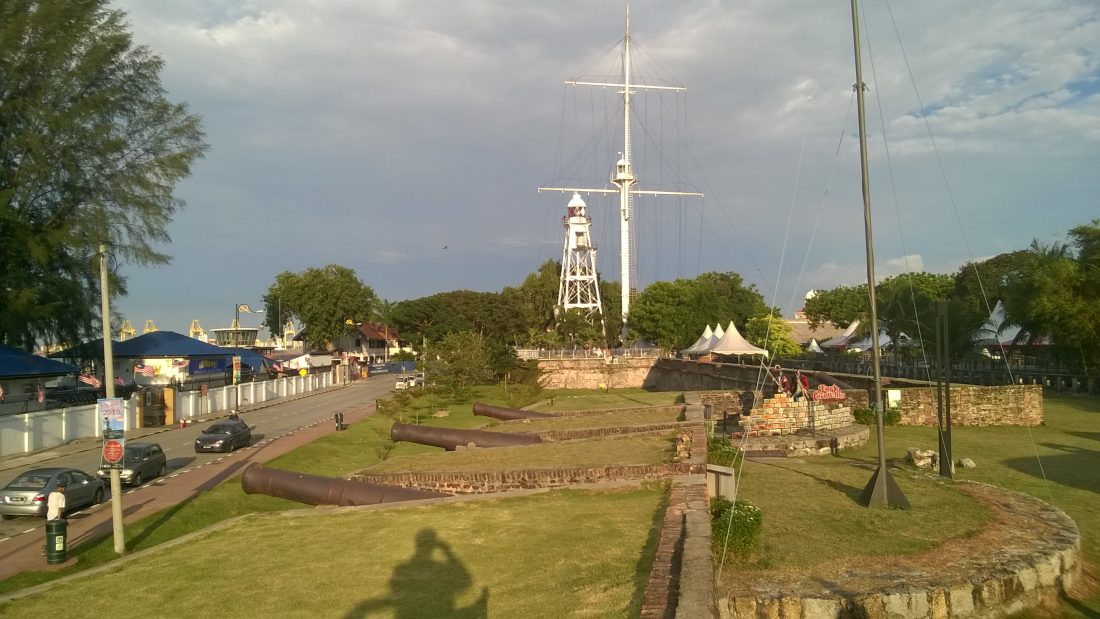 Fort Cornwallis today – the moat had been filled in

The key to consolidation of the British hold on Penang was the early construction of a sizable seaward-facing fortification, Fort Cornwallis, named somewhat ironically after the governor-general who was so dubious about the venture. The initial fortification was a stockade of palm logs, a simple structure but one which, when armed with cannon, was more than capable of withstanding attack by pirates or by the Sultan of Kedah. By 1804 however, with the Napoleonic Wars shifting into high gear and French forces operating in the Indian Ocean, a more substantial structure was needed. Convict labour was accordingly drafted in from India to rebuild the fort in star-shape and of brick and stone. It remains to this day and adjoins the magnificent Victorian town-hall.

When I visited Fort Cornwallis I saw that the basic structure is intact and there have been some efforts at restoration. The open interior is now used for concerts and events. The photographs below give an indication of how it is today and with imagination one can visualise how it might have looked in its prime. Armed with 32-pounders it would have been a dangerous target for sea-bombardment (Nelson’s dictum that “A ship’s a fool to fight a fort” applies). A number of Napoleonic-era cannon-barrels have been set in the embrasures. 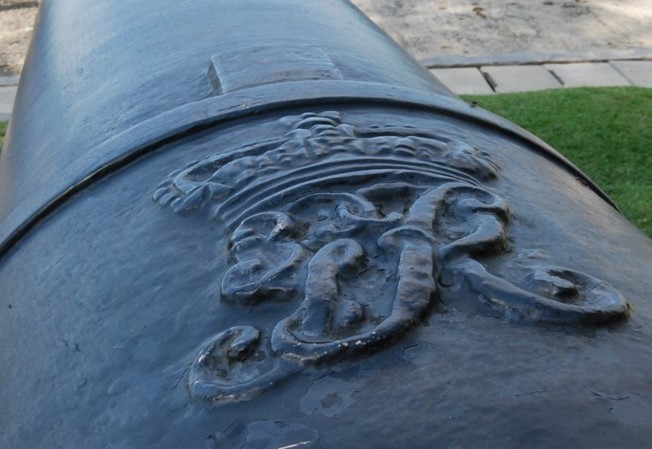 Logo on British Cannon – no doubting that it belongs to H.M. George III 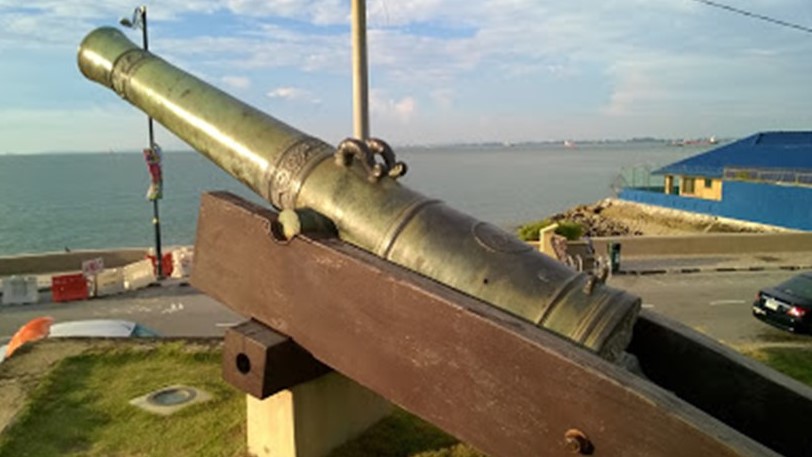 The most interesting gun in position is however from a much earlier era. Known as the “Sri Lambai Cannon”, this is a bronze Dutch piece cast in the early seventeen the century. It carries not only the VOC logo but a Latin inscription identifying the gun-founder: “Jan Burgerhuis Me Fecit”- “Jan Burgerhuis made me”. 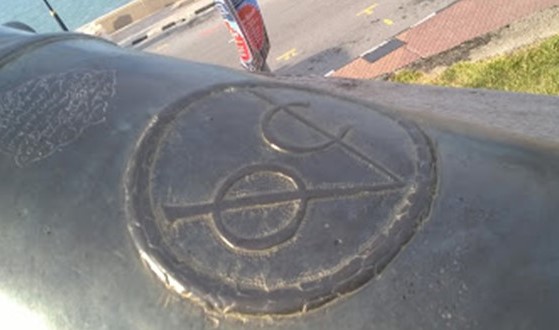 This weapon had a very colourful history. It was presented by the Dutch to the Sultan of Johore in 1606. It was subsequently captured by the Portuguese (who still had a limited trading presence) soon afterwards. A notice board (as per photograph) tells of its subsequent adventures and its alleged powers in relation to fertility. 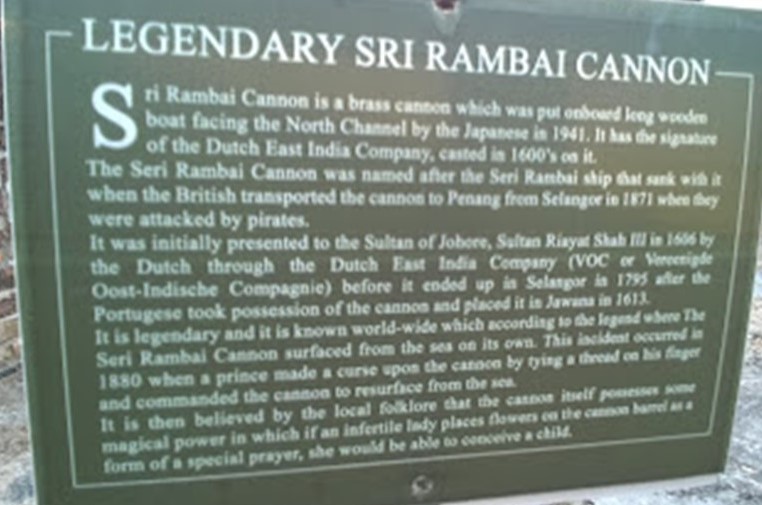 I’ll return in a later blog to some later events in Penang. It’s a quite splendid place and one which, with its high rise condos, multi-lane highways, huge modern shopping malls, enormous container port and amazing bridges is one which Francis Light would be proud of!