The term “post ship” was applied in the Royal Navy to Sixth-Rate vessels, and referred to the fact that they were the smallest ships that could be commanded by a post-captain. They were in effect miniature frigates, ship-rigged, some hundred feet long and around 500 tons armed with 20 to 26 long guns, typically nine pounders. They tended to be slow and for this reason were often used as convoy escorts. Given competent and determined commanders they could however give a very good account of themselves. One of the most notable instances of this occurred during the Seven Years War, when two such vessels, HMS Bideford and HMS Flamborough, each of 20 guns, fought a spectacular action against two larger and more powerful French frigates. 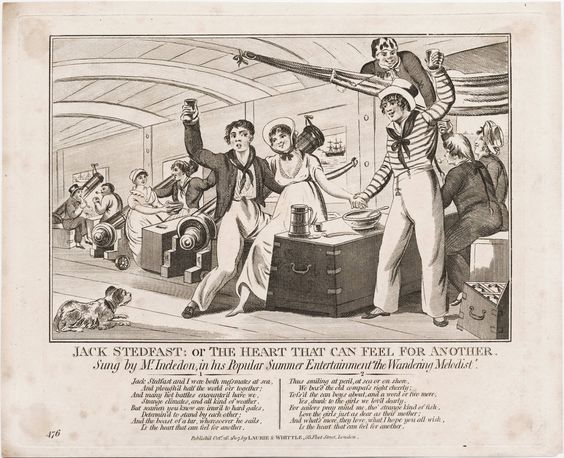 The spirit of “British Tar” was, no less than the professionalism of his officers, the foundation of the Royal Navy’s dominance in the Age of Fighting Sail. He was widely admired and often the subject of the pop-songs of the time, as shown here.

In April 1760 HMS Flamborough, commanded by a Captain Archibald Kennedy, and the Bideford, commanded by a Captain Skinner, were cruising off the Portuguese coast, close to the mouth of the Tagus. A valuable British convoy, escorted by a single sloop, was in the general area, but apparently out of sight. In the course of the day what appeared to be possibly four enemy ships were seen running before the wind. The two British ships were well to leeward and despite this, and the disparity in numbers, headed for the strangers. 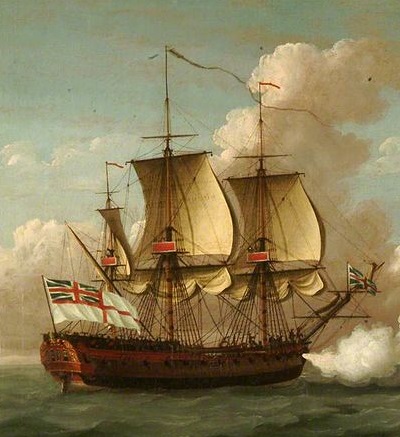 HMS Brune, a frigate captured from the French in 1761. The French frigates engaged by HMS Flamborough and HMS Bideford would have resembled this vessel. (Painting by John Cleveley the Elder, 1712 — 1777)

Captain Kennedy’s HMS Flamborough was the better sailer of the two British ships and by mid-afternoon got within distant gunshot range, opening fire on the closest ship – now clearly French. Rather than immediately engaging ship-to-ship, the French vessel signalled for two of her consorts to sail on and the third to join her in an attack on HMS Flamborough. Followed by the French – the frigates la Malicieuse (36 guns) and l’Omphale (32 guns) – Captain Kennedy retreated to join the Bideford. They met at around six o’clock. Despite the firepower advantage being in their favour, the French vessels now attempted to avoid action and ran.

As so often when reading accounts of combat in the Age of Fighting Sail, one is impressed by the aggressive self-confidence of Royal Navy officers. So it was in this case. The more powerful ships were in flight, the weaker in pursuit, as HMS Flamborough and HMS Bideford chased the retreating French. HMS Flamborough, first came up with the sternmost French frigate, delivered a single broadside and pressed on, leaving her to be dealt with by the Bideford. At half-past six o’clock, in twilight, HMS Flamborough came up with the leading French vessel, drew as close as possible without being able to board, or be boarded, and began a cannonade.

This slogging match continued until nine o’clock, by which time darkness had fallen. It’s hard to imagine what this must have sounded and felt like. Even a portrayal of a ship-to-ship action as realistic as that in the Master and Commander movie lasts only minutes on screen. HMS Flamborough and her opponent were at it for two and a half hours. By the time firing ceased – temporarily as it proved – the Flamborough’s masts, sails and running rigging were so badly damaged as to make her un-navigable and a number of serious hits had been sustained on the hull “betwixt wind and water”. During this pause the British crew worked with such energy that control was regained within half an hour and the action resumed. At eleven o’clock, after another ninety minutes of close combat, the French frigate broke off the action and made off, pursued by the badly damaged Flamborough until noon on the following day. 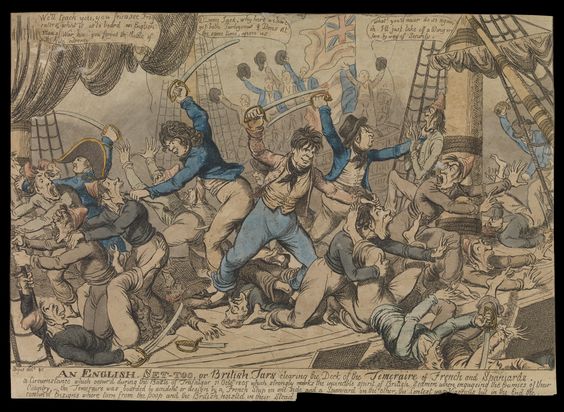 The aggressive and bloody-minded attitude of British seamen was widely admired – and feared.

HMS Bideford had also been heavily engaged. Shortly after seven o’clock – in darkness – she caught up with the French frigate that had been mauled by HMS Flamborough’s first broadside and attacked her. Bideford’s Captain Skinner was killed by a cannon-shot soon after and her Lieutenant Knollis, who now took command, fought on with determination for another hour until he was badly wounded and carried, dying, below. By this stage the Bideford’s spars and rigging had been damaged and casualties sustained. Morale remained high however and the master, a Mr, State, now senior officer, maintained the action. By ten o’clock the French ship’s fire slackened, her guns falling silent one by one. Intent on capturing her, Mr. State, who thought the enemy was going to strike, still continued his broadsides. In the last quarter-hour of combat only four French guns fired. Under cover of darkness, but still being pounded, the French crew was however concentrating on repair of rigging. This proved so successful that the French frigate managed to draw away while the Bideford, damaged and disabled, was unable to follow. 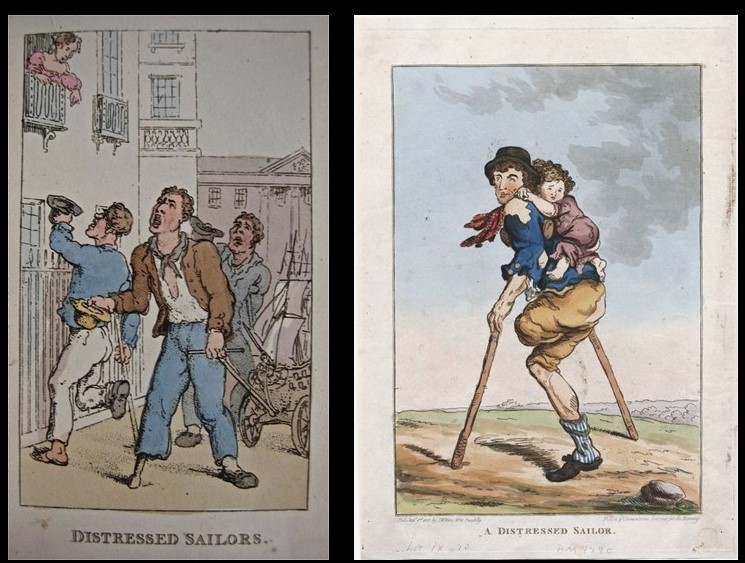 In an age when amputation was the only option for fighting gangrene, wounds sustained in battle could mean a lifetime of destitution in a nation that lauded its fighting men but didn’t care for them afterwards. (Has it really changed all that much?)

In the event both French warships escaped, albeit seriously damaged, outfought by two smaller and more weakly armed ships. Considering the duration and intensity of the battle one is surprised that the British losses were relatively low – though grievous for the individuals concerned. Five officers and men were killed on board HMS Flamborough, and ten wounded, while HMS Bideford had ten killed and twenty-five wounded. Crews on each ship would have been around 130. Losses might have been higher had the action been fought in daylight, when small-arms fire could have been poured down from fighting tops. Sending the French vessels to flight had the added advantage of protecting the convoy mentioned earlier. It was close enough to have heard the gunfire and it proceeded unmolested on its course.

The most remarkable feature of this action is the role played by morale. The decision of the British captains, outnumbered and outgunned as they were, to take the offensive from the start put the French on the back foot. They had lost the moral advantage even before Flamborough’s first broadside and it was never regained. The old saying that “what matters is not the size of the dog in the fight, but the size of the fight in the dog”, was once again proved valid.

The seventh Dawlish Chronicle is published in paperback and on Kindle, and is available to subscribers to Kindle Unlimited and Prime at no extra charge

Registering for the Dawlish Chronicles mailing list by clicking  on any one of the images below, will keep you updated on new books and facilitates e-mail contact between Antoine Vanner and his readers. You’ll also get five free short stories to load on your Kindle or Tablet.