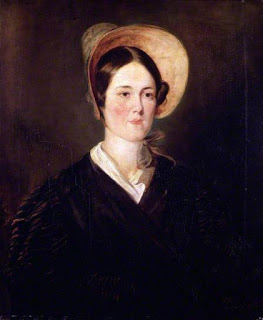 November 15th 2015 was the 200th anniversary of the birth of one of the great Victorian heroines. Grace Darling gained widespread acclaim for her courage, was celebrated in verse, prints and Staffordshire pottery and remained for several generations afterwards an almost legendary figure who was held up, deservedly, as an example to the young.

This lighthouse-keeper’s daughter, seventh of nine children, was raised on Farne Islands, off Northumbria, on England’s north-east coast, living in accommodation attached initially to lighthouses, initially on Brownsman Island, and thereafter to a more modern one, in a more advantageous position for assisting shipping, on the nearby Longstone Island. These islands are situated at the extreme south-west (Brownsman) and extreme north-east (Longstone) of the small archipelago.

Though the direct distance between these two islands is about three and a half miles, the distance by water is considerably more due to other islands lying in between. It is therefore a tribute to the watermanship and physical strength of Grace’s father, William Darling, that he regularly rowed back from Longstone to Brownsman to gather vegetables he still grew in his former garden. The craft used was a 21-foot, four-oared “coble”, a distinctively shaped type open boat, used mainly for fishing. The design had evolved so as to meet conditions on this coast – a flat bottom to allow easy launching and landing on the region’s sandy beaches and high bows to cope with heavy surf. 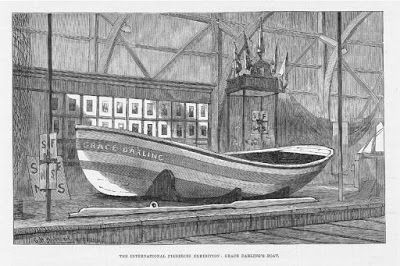 William Darling’s coble – on display in 1883

Grace Darling’s life was an uneventful – if hard one – in Spartan conditions until she was 23 years old but events on 7th September 1838 were prove that she had bravery of the highest calibre. Two days before this a coasting paddle-steamer, the 400-ton SS Forfarshire, had departed from the port of Hull – further south – to sail north to Dundee on Scotland’s east coast. At this period, when the Railway Age was still in its infancy, travel by sea was an attractive – and cheaper – alternative to travel by road.  The Forfarshire was carrying 63 passengers and crew as well as a substantial quantity of freight. Soon after leaving Hull the boilers began to leak, and on the next morning the weather began to deteriorate. No thought seemed to have been given to turning back and the vessel forged slowly north-north-eastwards, past the lighthouse manned by the Darling family on Longstone Island. 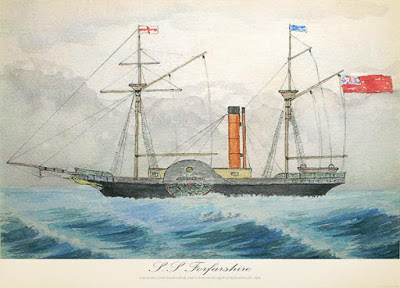 By evening on September 6th it was found that the boiler leakage had got worse and the storm was now so severe that water was cascading down from the deck was quenching the furnaces. Off St. Abb’s Head – some 25 miles from Longstone Island – the machinery ceased functioning and there was no option but to set the sails and run before the storm. This was to take the Forfarshire directly towards the Farne Islands. The beam of a lighthouse had been spotted and the captain, John Humble, who had his wife with him, decided that it was the Inner Farne Light at the south-west end of the islands. Should he be able to keep it off his port beam he could pass safely between the islands and the mainland – a channel known as the Fair Way. He was mistaken however – the light was that on Longstone and keeping the light to port meant that he was driving directly towards the islands.

The roar of breakers was heard just before daybreak on 7th September. The captain tried to take evasive action but the Forfarshire proved incapable of responding to the helm. She was now wholly at the mercy of the storm. Seas were breaking over her in the darkness and she was soon driven on to a rock known as the Harcar, her bows crashing down on it, and rising with the surge, then smashing down again.  Eight of the crew now rushed to a boat and lowered it lowered successfully. One half- naked and frenzied passenger jumped in after them. The storm carried this boat out into the open sea and, as it proved, to safety, for the occupants were subsequently rescued.

The ship was now in her death throes. She was still being pounded on the reef and the hull was incapable of resisting. The Forfarshire broke in two, the after half – containing the cabins, many of the passengers as well as the captain and his wife – was swept away. Though many on its deck had been washed away, the fore-half remained lodged on the rock.  The tide was however falling and the continuing battering by the waves was making the wreck unstable and liable to roll over. Realising the desperation of the situation, the ship’s carpenter and one of the passengers leaped down on the rock itself and encouraged the survivors – including a mother and two children – to join them. 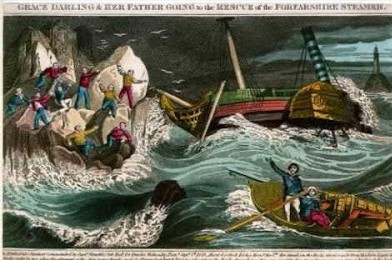 Grace Darling and her father to the rescue – contemporary print

This drama was played out in darkness and though the lighthouse was only a mile away those in it – only Grace Darling and her parents – were unaware of what was happening. Only at daylight, and through a telescope, could movement be detected on the Harcar Rock. The weather was still so stormy that William Darling doubted the possibility of rendering assistance. Grace Darling was however adamant – they would take the coble, regardless of risk, and she herself would wield one oar. Her father yielded and with the help of his wife the boat was launched out into the surf. 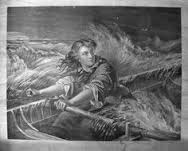 Intimately acquainted with the geography of the islands, William Grace took a roundabout course to approach the rock from the most favourable direction. The coble was repeatedly almost overwhelmed but her design, proven over centuries, was in her favour. It was however a four-oar boat and Grace Darling and her father were tested to the limits of their strength as they pulled through the boiling foam. They at last came in sight of the rock, spotting nine cold, terrified and exhausted survivors. From initial observation only three or four had been expected but the number was now too much for the small boat to carry. Two trips would be needed. (The small iconic illustration to the right was reproduced by the thousands).

Grace Darling now took both oars and manoeuvred the coble close enough for her father to spring across.  He was now faced with the unenviable task of who to take on the first trip. One of these was to be the mother, a Mrs. Dawson, whose two children had already died of privation. There was no option but to leave their bodies on the rock and to get her back to the lighthouse together with three others, one of them injured and the others able-bodied members of the crew who were able to take an oar each. They gained the lighthouse safely. Grace Darling – who must have been exhausted by now –remained behind with her mother to comfort the bereaved Mrs. Dawson. Her father returned to the Harcar Rock with the two seamen from the Forfarshire and managed to take off the remaining survivors. The entire rescue had taken two hours. 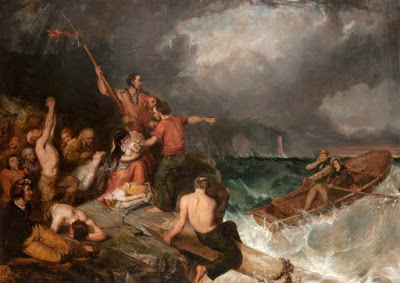 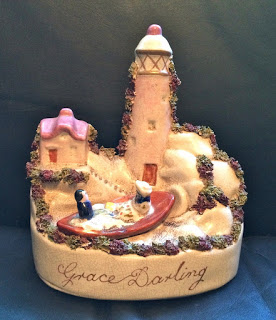 Grace Darling’s role in the rescue became a sensation. The story spread from the local press to the national and one article, in the magisterial Times, asked “Is there in the whole field of history, or of fiction even, one instance of female heroism to compare for one moment with this?” A subscription was set up on her behalf – the recently-succeeded Queen Victoria donated £20 – and gifts of all types were sent to her by admirers. Letters arrived by the sackful – some asking her to kiss them and return them (one wonders how effective this could have been in the days before lipstick) and visitors arrived at the lighthouse in hired boats in the hope of seeing her. Paintings and drawing were made of her and were reproduced by the thousands and she was even represented in a particularly ghastly but popular art-form of the time, Staffordshire china representations intended for display on the mantelpiece. She   was invited to appear on stage, and even in a circus, though she declined to do so. Songs and poems were written in her honour. Particularly memorable are the verses for which the Scottish poet William McGonagall was responsible some decades later, a sample being:

Grace Darling lived up to the virtue she was named for and was not corrupted by fame, despite the adulation her courage earned. She turned down every offer to exploit her reputation (though one of the survivors did, touring the country and telling his story with the aid of a “Panorama”) and she continued to live with her family. Her days were however numbered. “Consumption” – that catch-all term of the time that usually meant tuberculosis – had already taken hold.

She died in her father’s arms in 1842 just short of her twenty-seventh birthday. She was – rightly – to remain one of the most admired heroines of the Victorian Era. Her ability to summon unexpected levels of courage when faced with unanticipated calamity makes her one who deserves to be remembered today.

Click here for an 8-minute video in which Antoine Vanner talks about  his latest book, Britannia’s Mission