In sea battles from the 1780s to the end of the Napoleonic Wars a decisive factor was often the use of the carronade. Few of these guns were carried on any one ship, and they were not counted in a ship’s rated number of guns so that, in practice, the actual number of weapons carried might be significantly higher than the rating by which a ship was classed, such as a “74” or a “50”. 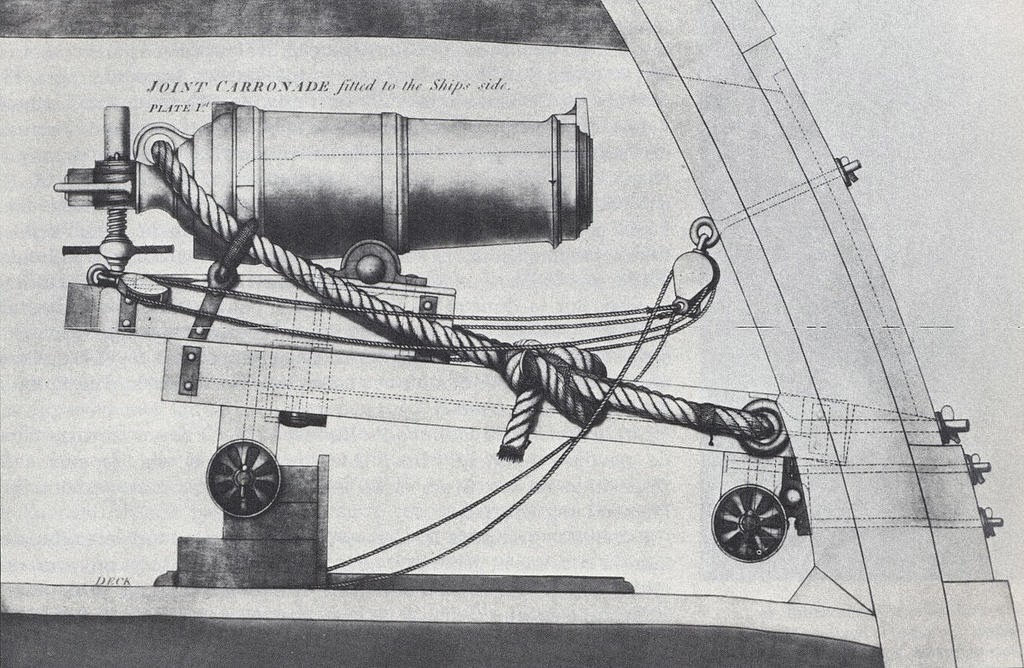 The word “carronade” was an early, perhaps earliest, example of a trade-name becoming the accepted term for an entire class of products, in this case a short smoothbore cast iron cannon. It took its name from the original manufacturer, the Carron Company, which had an ironworks in Falkirk, in Scotland. The short barrel indicated that it was a short-range weapon, powerful against ships but even more so against personnel in close actions. A carronade weighed a quarter as much and used a quarter to a third of the gunpowder-charge for a long gun firing the same size of roundshot. The lower recoil forces meant that slider mountings, rather trucks, could be employed. The light weight of the carronade made it especially attractive for mounting at higher levels – and important factor when an enemy’s deck should be cleared by grapeshot before boarding. They could also provide a very powerful punch for a small vessel such as a gunboat or sloop. Though the basic concept remained unchanged, carronades were manufactured for a huge range, from 6 to 42-pounders, and 68-pounder weapons not unknown. 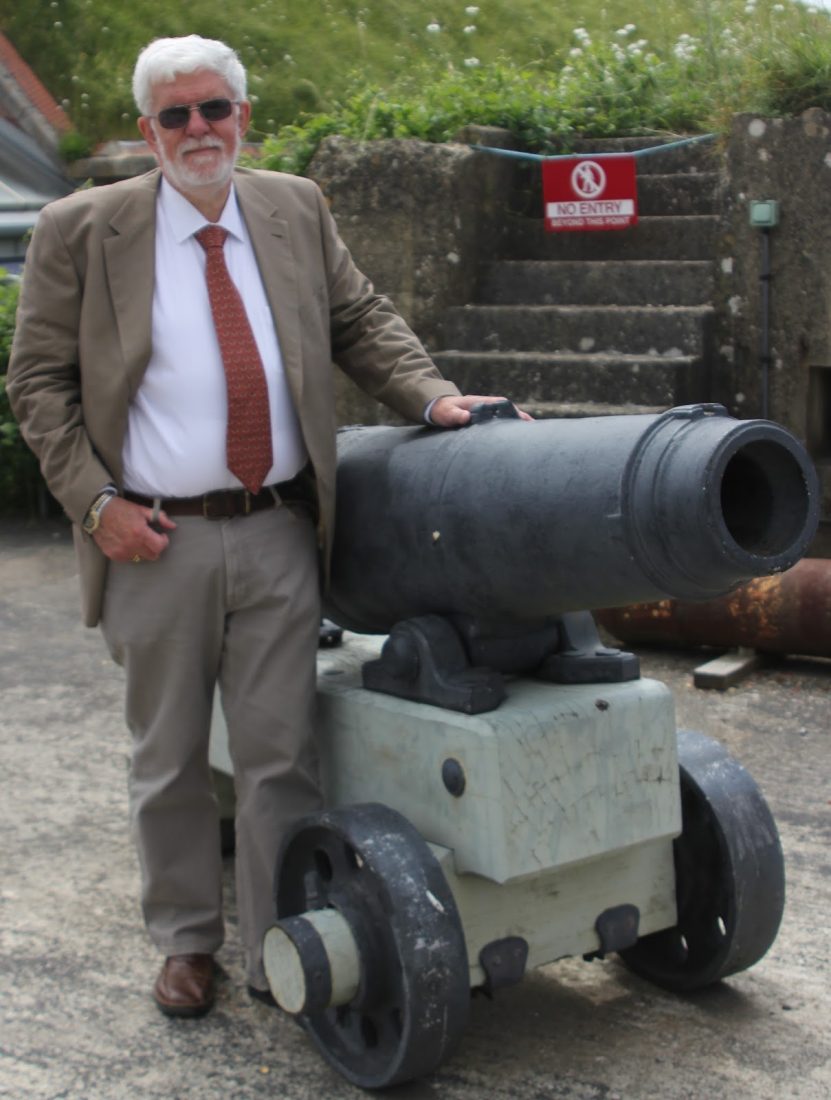 When introduced into the Royal Navy for trial in 1779, many captains had reported most unfavourably upon it, owing to its short range and tendency to overheat when fired rapidly. The comment on short range was justified for, devastating as a carronade could be in action, its weakness was its short range. The analogy may be a sub-machine gun which, if used at close quarters, can be murderous, but is useless against an enemy armed with a sniper rifle who prefers to stay out of its range and to count on his accuracy. Only by luring the sniper closer can the man armed with the sub-machine gun make use of its ability to unleash a devastating volume of fire. In the case of sailing warships encountering each other at sea the presence of carronades might not be immediately obvious and in many cases were to provide a very unpleasant surprise as the ships closed. The first occasion on which carronades were used in action, when the Royal Navy’s 36-gun frigate Flora encountered the French 36-gun frigate Nymphe, was a good example. 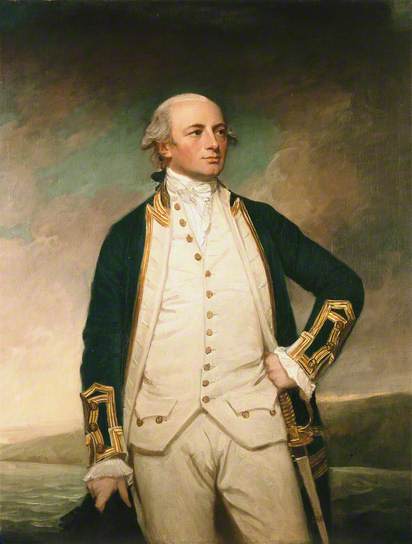 In August 1780 the Flora was under the command of Captain William Peere Williams (1742 – 1832). He was to be one of the officers whose entire life spanned the classic Age of Fighting Sail and who lived on to see the dawn of steam-power. As a junior officer he had served under Hawke at the Battle of Quiberon Bay in 1759 during the Seven Years’ War. By the time of the American War of Independence he had achieved command, first the frigate HMS Venus, in American waters, and subsequently as the first captain of HMS Flora with the Channel Fleet. She was a new ship, commissioned in 1780 and her performance in action later that year indicates that Peere Williams was relentless in training his crew to a high standard of gunnery.

The Flora’s rating as “36 guns” was deceptive though she did indeed carry that number of long guns – twenty-six long 18-pounders, and ten long 9-pounders – she also carried six of the new 18-pounder carronades, giving her a 333-pound broadside weight. On the afternoon of 10 August 1780 she was patrolling off Brest, a monotonous but war-winning duty that was familiar to the crews of hundreds of Royal Navy vessels for seven decades from the 1750s. The weather was hazy but two vessels were sighted some four miles distant. The smaller vessel made off but the larger stood her ground, obviously willing to accept battle. She was the French frigate Nymphe, of the French Royal Navy, her Captain the Chevalier de Runrain.  She nominally superior to the Flora in everything but armament. She was the bigger ship by about 70 tons (868 to 737, important as regards enduring damage), sailed faster, and had the larger crew. She carried twenty-six long 12-pounders, and six long 6 – pounders, giving a broadside weight of only 174 pounds, just over half of the Flora’s.

“At 4.30 P.M. saw a ship and a cutter in the S.W. quarter, standing to the northward under easy sail. Made sail and stood for them, at which they tacked and stood towards the shore for some minutes, and then brought to, having French colours flying. We made the private signal to them, which we found they did not understand by the ship hoisting a blue flag at the ensign staff. We cleared for action, hauled down the signals of recognisance and hoisted our St George’s ensign, hauled up the fore-sail, bunted the main-sail and top-gallant-sai1, still running down on her to windward.” 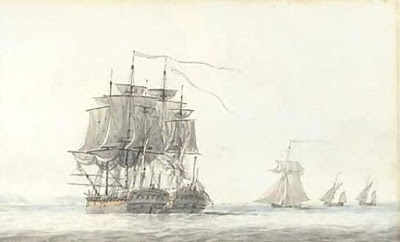 “At 5.15, being then about two cables, length distant from her, received her larboard broadside. We ran within one cable’s length of her and then began the action, which continued very hot on both sides till 6.15, when we had our wheel and tiller-rope shot away and fell alongside of her with our spare anchor hooking her fore-shrouds. They then attempted to board us, but were repulsed with great loss, we still keeping up a warm fire of great guns and musketry. At 6.80 boarded her, cleared her decks, and burnt their colours for them.”

The action was a punishing, straightforward fight to a finish, with little attempt on either side at finesse or manoeuvre. The total French loss was 60 killed and 71 severely wounded. Many of these casualties resulted from the ineffectual attempt to board and the havoc unleashed on them by six 18-pounder carronades mounted on the poop and quarter-deck of the Flora. In the heat of the action one of these weapons was manned only the boatswain and a single boy. The French captain was killed by a musket ball just before the two ships touched, the second-in-command fell on the deck of the Flora at the head of his boarders and the first lieutenant fell between the two hulls and was crushed to death. Almost every other French officer was wounded. The report by the Nymphe’s dangerously wounded second lieutenant, the Sieur de Taillard – written in Falmouth, to where the captured frigate was taken – stated that “I do not think it possible to speak too highly of the cool and collected courage shown by all the officers. We were twice on fire, and there was an explosion of cartridges”. The Flora lost fewer dead – nine in total – but sustained the same number of wounded as the Nymphe and her total casualties amounted to approximately one third of her crew. 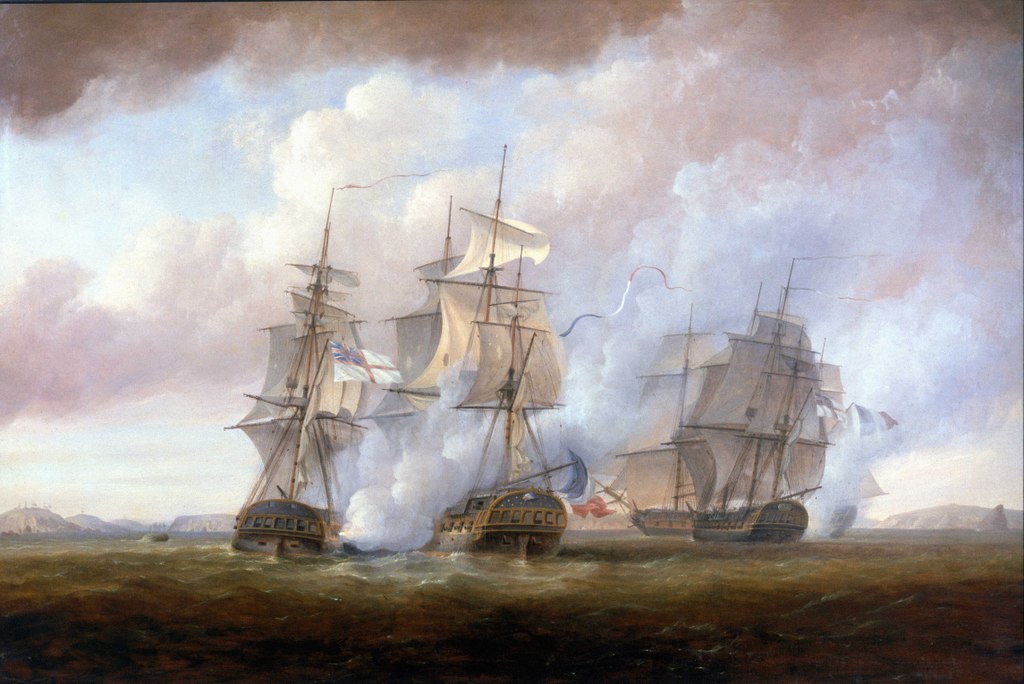 HMS Flora’s later career was useful rather than spectacular. While still commanded by Peere Williams she participated in the second naval relief of the Siege of Gibraltar in 1781 and thereafter her most notable contribution was support of Britain’s Egyptian campaign in 1801. She was wrecked in 1808. The Nymphe’s career in the Royal Navy – she retained her name after the change of ownership – was to be much more spectacular and we shall meet her again in a later war.

The nine novels (so far) of  the Dawlish Chronicles series are set in the years 1864 to 1885 and are linked to real events of the period. It’s a time of rapid political, social and technological change, with established powers striving to maintain their position as new competitors appear and alliances shift.  And in these challenging times, a Royal Navy officer, Nichols Dawlish, is intent on building his career…