Vanguard is a name that has been used by no less than eleven ships of the Royal Navy. The first entered service in 1586 and the most recent, still serving, is a nuclear-powered ballistic missile submarine  that gives her name to a class of four. The name is also associated with the last, and arguably the most aesthetically pleasing, of the Royal Navy’s battleships, which was scrapped in 1960. Two earlier ships named HMS Vanguard were however to meet even more unpleasant fates, one a dreadnought and a veteran of Jutland, lost to a magazine explosion the other in a wholly avoidable disasters.  It is with the fate of this latter HMS Vanguard that this posting is concerned. 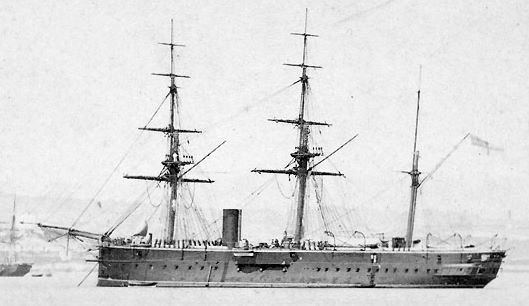 The HMS Vanguard launched in 1870 was one of a class of four ironclads, her sisters being Audacious, Invincible and Iron Duke. The concept of a sea-going ironclad capital ship was only ten years old. HMS Warrior, as revolutionary in her time as HMS Dreadnought four decades later, had become the starting point for a new type of warship. HMS Vanguard and her sisters represented a second generation of such ships. Their most notable departure from the Warrior configuration was that although HMS Warrior carried her many guns in broadside mountings, as warships had done for centuries, HMS Vanguard’s armament of much heavier weapons was concentrated in a two-storey armoured box amidships. 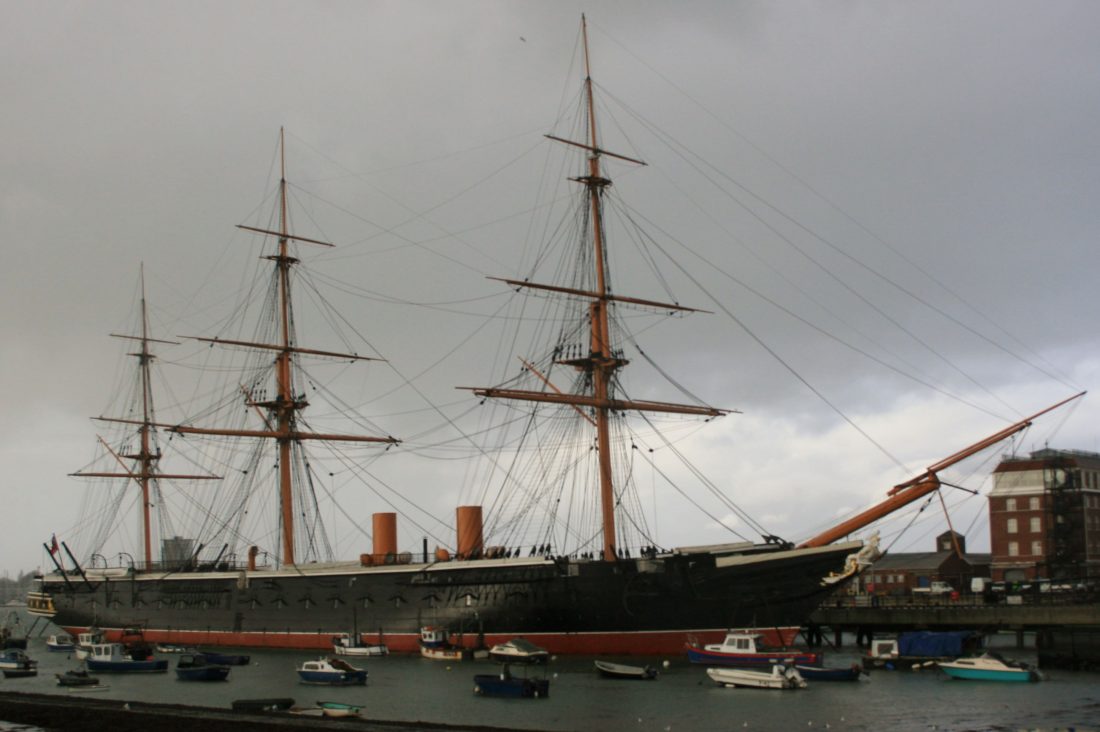 HMS Warrior – obsolescent in 1875, when she was present at HMS Vanguard’s sinking, but today restored to her former glory at Portsmouth 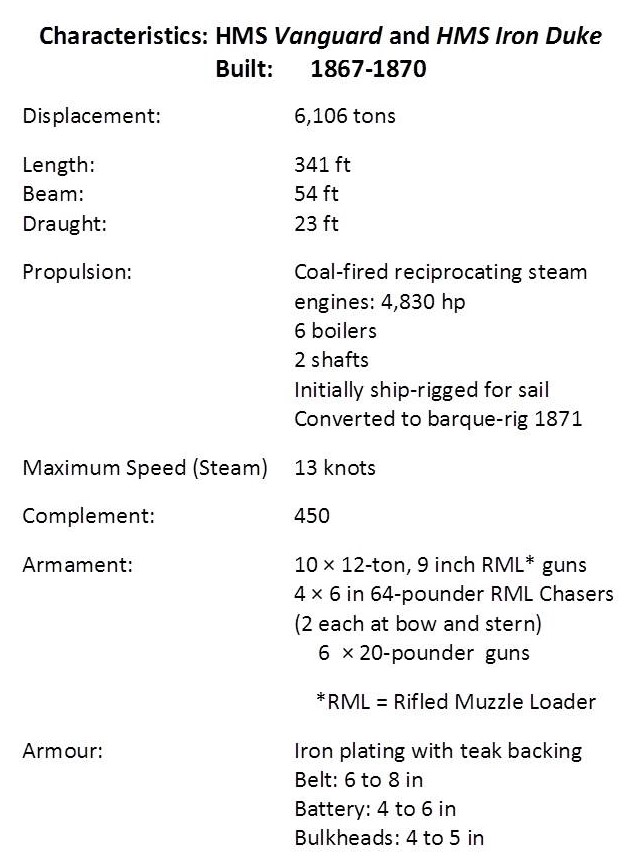 HMS Vanguard and her sisters (see details at right) were rated as “second-class”, of moderate dimensions that were well suited for deployment on foreign stations, most likely singly. Iron Duke was to serve as flagship of the China Station for four years from 1871 and was one of the largest ships to transit the Suez Canal up to that time. Her sailing rig made her particularly suitable for operations in areas, such as the Pacific Ocean, where coaling opportunities were limited. All four vessels of the class were described as “good and steady seaboats but slow under sail”.

By 1875 Iron Duke had returned to home waters and was assigned, with her three sisters, with the ironclads Hector, Defence, Penelope and Achilles, and the by-then obsolescent Warrior, to the First Reserve Squadron.  In late August the squadron was based at Kingstown (now Dún Laoghaire) the large artificial harbour on the southern side of Dublin Bay. On the morning of September 1st the Squadron left Kingstown in line, the majority of the vessels headed for Queenstown (now Cobh) further south on the Irish Coast. This enormous force must have been a magnificent sight as they passed, one by one, through the narrow-gap between Kingstown’s projecting mile-long piers. 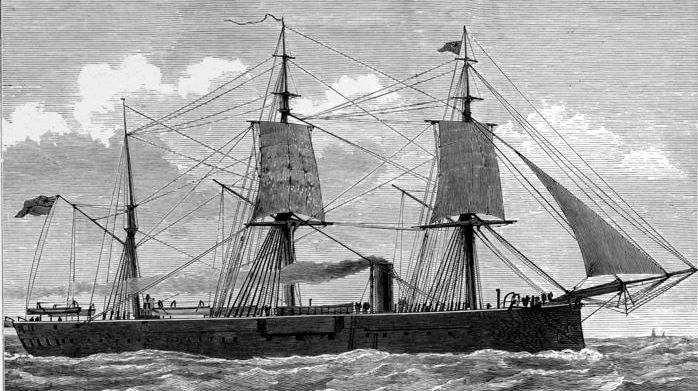 HMS Vanguard at sea under sail and steam power

Six miles out, off the Kish lightship, the Achilles broke away to head for Liverpool and the remaining ships turned south. The sea was moderate, but a fog came on, its density increasing. The ships had been proceeding at some twelve knots, but speed was reduced to half this as the fog persisted.  By a half-hour after noon the lookouts on HMS Vanguard could not see more than fifty yards ahead, and the officers on her bridge could not see the bowsprit.  It is unlikely that the situation was any better on the other ships. 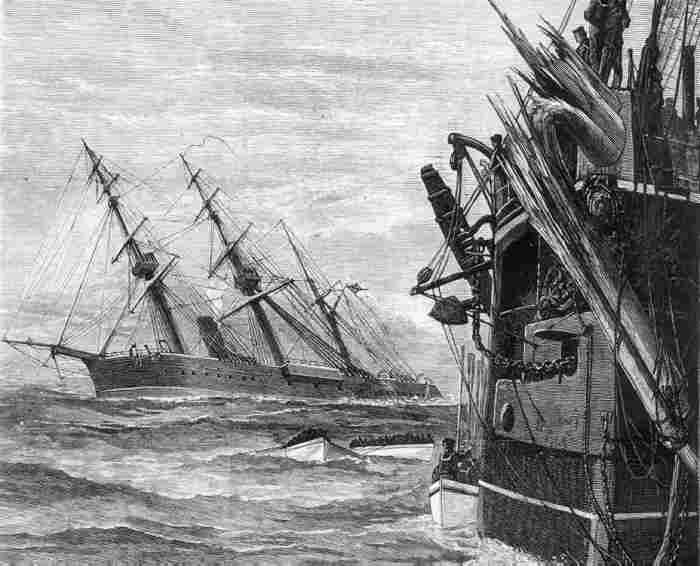 The Vanguard’s watch suddenly reported a sail ahead, and the helm was put over to prevent running it down. The Iron Duke was then following close in the wake of HMS Vanguard, whose action brought the two vessels closer, presenting Vanguard’s port broadside-on to Iron Duke’s bow. Unaware of any change, and blinded by the fog, the Iron Duke ploughed on. Only at the last moment did her commander, a Captain Hickley, who was on the bridge, see Vanguard emerging from the mist. He ordered reversing of his engines, but it was already too late. The Iron Duke’s ram struck the Vanguard below the armour-plates, on the port side, abreast of the engine-room. The rent made was very large—amounting, as the divers afterwards found, to four feet length —and the water poured into the hold in torrents. It was immediately obvious that HMS Vanguard was doomed for this was still an age when compartmentalisation and damage-control of iron vessels were in their infancy. 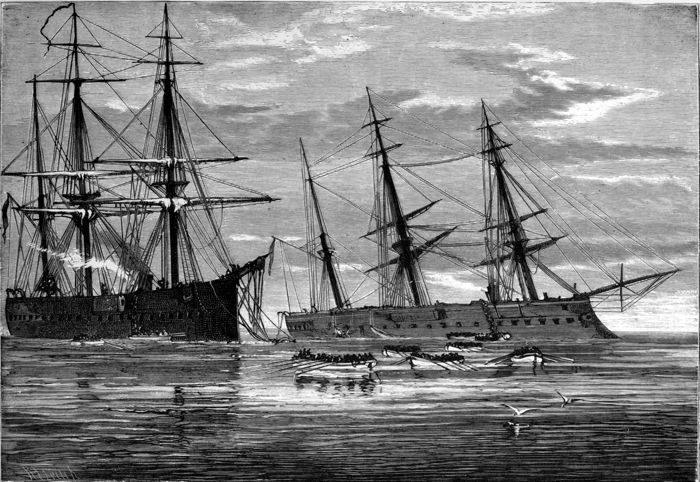 There was nothing more to be done but to save lives. Vanguard’s Captain Dawkins ordered abandonment and officers and men behaved calmly. At the risk of his life one of the mechanics returned to the engine-room to blow down the boilers, so preventing an explosion. The water rose quickly in the after-part, and rushed into the engine and boiler rooms, eventually finding its way into the provision-room flat, through imperfectly fastened “water-tight” doors – which proved anything but. Discipline was superb, the crew standing on deck as if at an inspection and not moving until ordered. Boats were lowered by both Vanguard and Iron Duke and in the process of transfer the only casualty of the disaster was sustained – a finger crushed between a boat’s gunwale and a ships’ hull. The actual transfer to Iron Duke of Vanguard’s entire crew was achieved in twenty minutes and Captain Dawkins was the last man to leave her.

HMS Vanguard heeled gradually over until the whole of her enormous flank and bottom, down to her keel, was above water. Then she sank gradually, righting herself as she went down, stern first, the water being blown from hawse-holes in huge spouts by the force of the air rushing up from below. She disappeared some ninety minutes after the collision. 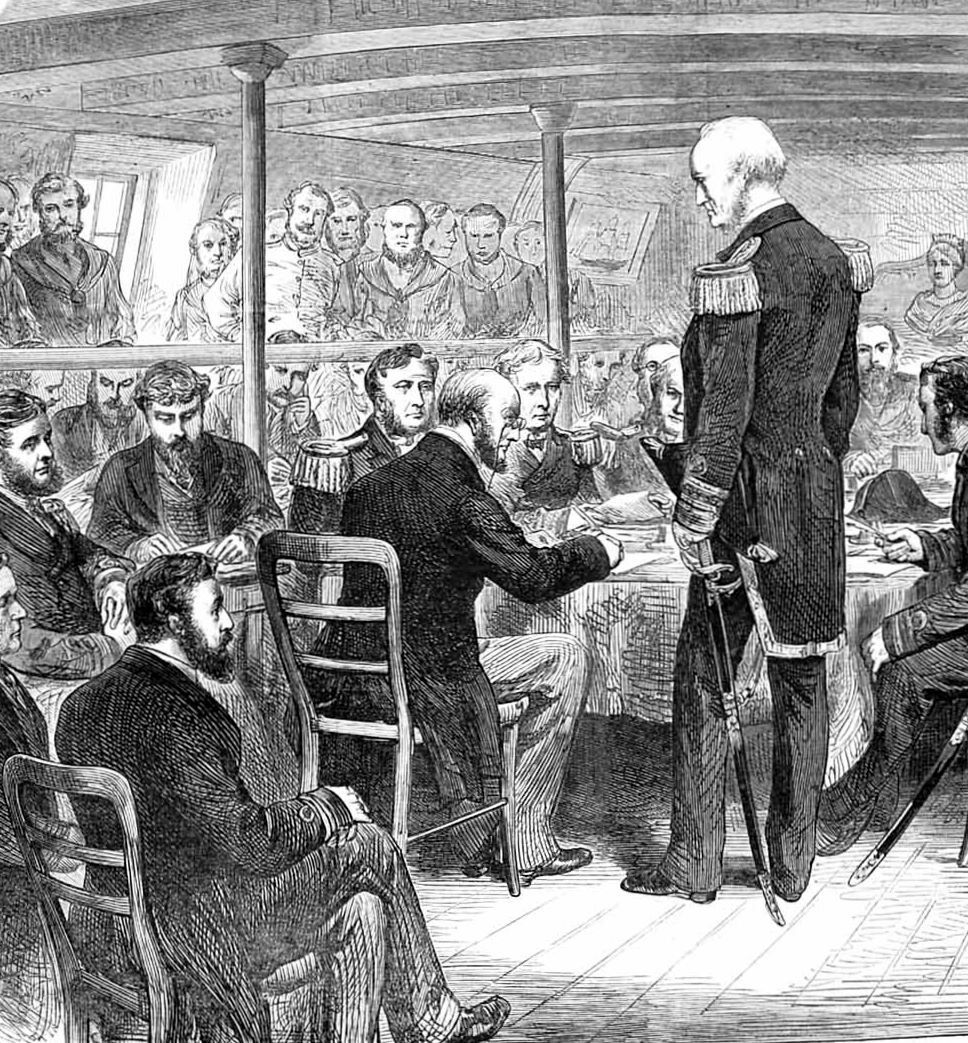 The inevitable court-martial was to prove remarkable for the statement by the then First Lord of the Admiralty – the minister responsible for the Navy – that “we ought to be rather satisfied than otherwise with the occurrence”.  Edward Reed, the designer of both ships, and by 1875 a Liberal Member of Parliament, stated that ironclads were in more danger in times of peace than in times of war. In peacetime, he said, they were residences for several hundred men, and many of the water-tight doors could not be kept closed without inconvenience. In wartime however they were fortresses, and the doors would be closed for safety.  Even more remarkably, close station-keeping in a fog was not considered as contributing to the disaster. The Court commented negatively on the conduct of the Iron Duke’s officers and indirectly blamed the admiral in command of the squadron. The Admiralty  could find nothing wrong in either case and visited their wrath on the unfortunate lieutenant on deck at the time.

HMS Vanguard still lies, largely intact, in some 150 feet of water off Ireland’s Wicklow coast. She is reachable by experienced air-divers – and visiting her must be a magnificent experience.

And Vanguard’s Captain Dawkins? Well as he behaved after the collision, he was severely reprimanded by the court martial and his career was at an end. 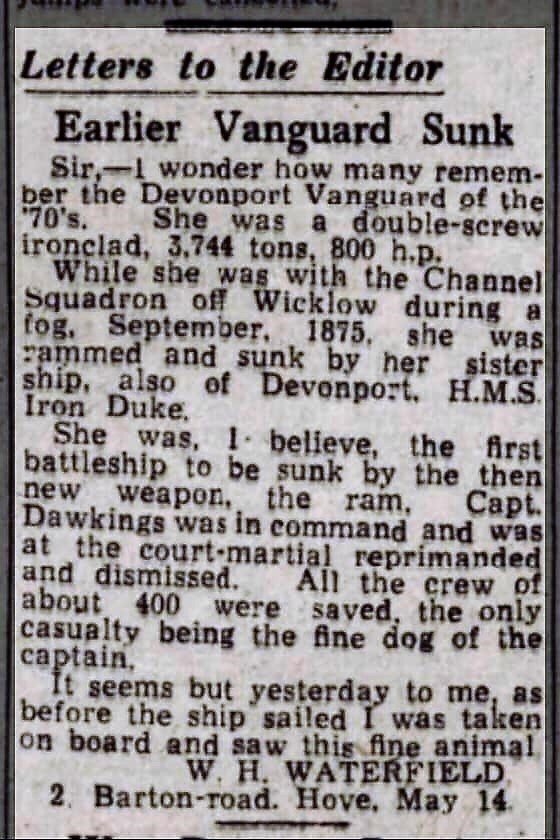 An interesting postscript to the story is that one of  this HMS Vanguard’s crew, a Mr. W.H. Waterfield, was still alive in 1946, as evidenced by a newspaper cutting, as on right, posted on FaceBook by Mr. Victor Lee Graham Fox, to whom I am indebted for it‎.  It is a letter written to the editor of  Western Morning News on May 17, 1946.  Given the use of the adjective “earlier” once suspects that it was inspired by news of the commissioning of Britain’s last battleship on May 12th of that year. It is a good illustration of just how much change one can see in a single lifetime. This gentleman would have come to maturity in the mid-Victorian period, would have heard news of the Zulu War and the death of General Gordon, would have been approaching middle age by the time of  the Second Boer War and the first flight of teh Wright Brothers. He would probably admired the next HMS Vanguard, the vessel tragically blown up in 1917 He lived through World War One, would have known of the Russian Revolution, the rise of Fascism and of the Nazis. He would have listened to the radio, would have visited the cinema and, as an old man by now, lived on through World War Two. He wrote this letter nine months after the atom-bomb attacks on Japan that initiated the Nuclear Age. So much change in one lifetime!

And he adds one final detail, a sad one, to the story of the ironclad HMS Vanguard. Though the entire crew survived, Captain Dawkins’ dog, “a fine animal”, did not.