Nelson’s Column in Trafalgar Square has been a landmark in London since it was completed in 1843. It is just under 170 feet tall (including the statue of Nelson himself at the top) and the four sides of the pedestal carry relief panels that commemorate Nelson’s four great fleet actions – St.Vincent, The Nile, Copenhagen and Trafalgar. The bronze they are cast from were from French cannon captured in battle. It is guarded at its corners by four enormous bronze lions which were added in 1867. 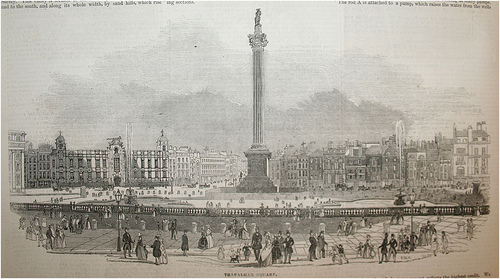 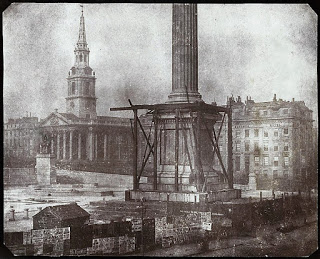 The creation of the memorial, and of the square surrounding it, commemorated the 21 October 1805 battle which established British naval supremacy for over a century and which laid the foundation for the ultimate victory over Napoleon. Nelson’s death just after victory had been secured (“I thank God I have done my duty” were his last words) confirmed him as a national hero whose lustre has not faded to this day. Construction of the London column was recorded in one of the earliest photographs (on right) taken in Britain. It was made by the great pioneers of photography, William Henry Fox Talbot (1800-1877). 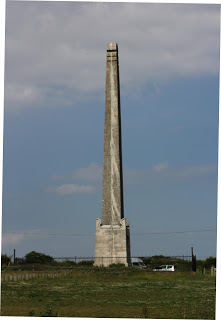 The significance of the Trafalgar was recognised as much by Nelson’s contemporaries as by later generations and in the years after his death memorials were constructed to him in Edinburgh, Dublin, Birmingham, Liverpool and elsewhere. The earliest however, and the one that has the closest associations with Nelson himself, is perhaps the least known.

“Nelson’s Needle”, is on the top of the steep Portsdown Hill, just north of Portsmouth, the city that was been the centre of British naval power for almost a thousand years. It stands exposed and lonely, all but surrounded by fields, the only building nearby being the half- hidden, half- underground 1860s-era Fort Nelson. The monument is an austere structure, a granite obelisk, 93 feet tall, its design based on 4th Century AD monuments in Axum, the ancient religious capital of Ethiopia. At the top, looking out over the Portsmouth, the Solent, the Isle of Wight and the Channel beyond – the starting and finishing point for so many of Nelson’s adventures – is a small bust of the man himself. A dignified inscription on a panel at the base bears the consecration. 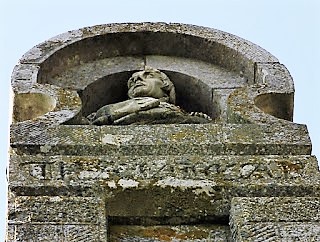 Nelson’s bust at the top of the Needle

The origin of the monument goes back to Nelson’s lifetime when, in 1799, Nelson’s prize agent Alexander Davison campaigned to establish a memorial to “perpetuate the glorious victories of the British Navy” and “to honour Britain’s naval glory and pre-eminence”. It was, however, Nelson’s death at Trafalgar, 21 October 1805, that gave the impetus for construction. 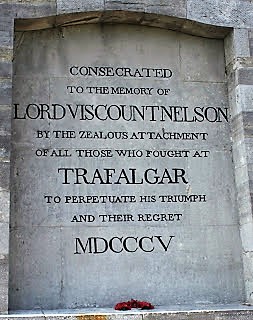 The “Needle” was built in 1807-08, in the immediate aftermath of the battle, and was paid for by a donation of two day’s pay by all who served on Nelson’s flagship, HMS Victory, at Trafalgar, as well as by prize money arising from it.  It is pleasing that even 209 years after Nelson’s death the masts and yards of the Victory can still be glimpsed from the monument in the dockyard where it is so lovingly preserved.

Today, by its relative isolation, the monument on Portsdown Hill is still moving in its austerity. In this its dignity contrasts with the tawdry state into which Trafalgar Square in London is so often plunged, especially since holding “Pop” concerts there involves blanking off much of Nelson Column’s base from view. There are four plinths in the square, the fourth until recently being kept unoccupied – possibly reserved for a statue of the Queen after her death. A recent decision is that new items of art should be displayed on this plinth for several months, until replaced with another. 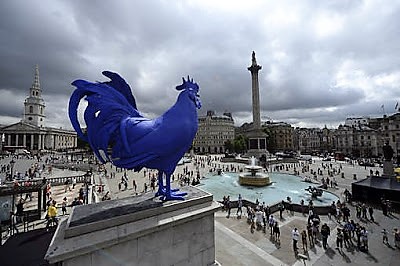 The Victorians erected statues to heroes. Today statues are erected in honour of blue roosters. One can only assume that this one was  some sort of condescending sneer at the past

One wonders what Nelson would have thought of this. He would certainly have approved of the statue of Air Marshal Sir Keith Park, a kindred spirit who played a leading role in ensuring victory in both the Battle of Britain and the Battle of Malta. One doubts however if Nelson would have thought much of one temporary occupant of the plinth – a huge blue chicken which looked like an overgrown toy from a child’s collection of cheap plastic farmyard animals. Why Nelson has had this inflicted on him – or indeed why it was reflected on the general public – is anybody’s guess!