The inshore-operations of the Royal Navy during the Napoleonic Wars were characterised by aggressive daring and were critical in hampering – and often paralysing – the coastal traffic of every maritime nation controlled or occupied by the French. As such they are the inspiration of so much naval fiction. It is however easy to forget the price paid in human misery and this article deals with one of the most pathetic of such instances and a humble heroine who found herself aboard HMS Swallow in 1812 adn who deserves to be remembered with honour.

HMS Swallow entered service in 1805, yet another of the Cruizer-class brigsthat featured so prominently in so many inshore-operations. Of 386 tons, and 100-feet long, she was armed with massive firepower for her size – sixteen 32-pounder carronades and two 6-pounder long guns. Her crew was officially 121 but, as told later in this article, she was carrying at least two other people. In July 1812 she was to be involved in a vicious encounter with a French brig-corvette Reynard off Frejus, on the Mediterranean coast. Under the command of Commander Edward Reynolds Sibley (Circa 1775 – 1842), HMS Swallow was part of a small British squadron consisting in addition of the “74” ship-of-the-line” HMS America and the frigate HMS Curacoa. Together they had driven a French convoy from Genoa to seek shelter in shallow waters and under shore batteries at Frejus – a scenario that must have been almost monotonously familiar during the period. The larger British ships drew too much to go inshore, leaving HMS Swallow to reconnoitre. 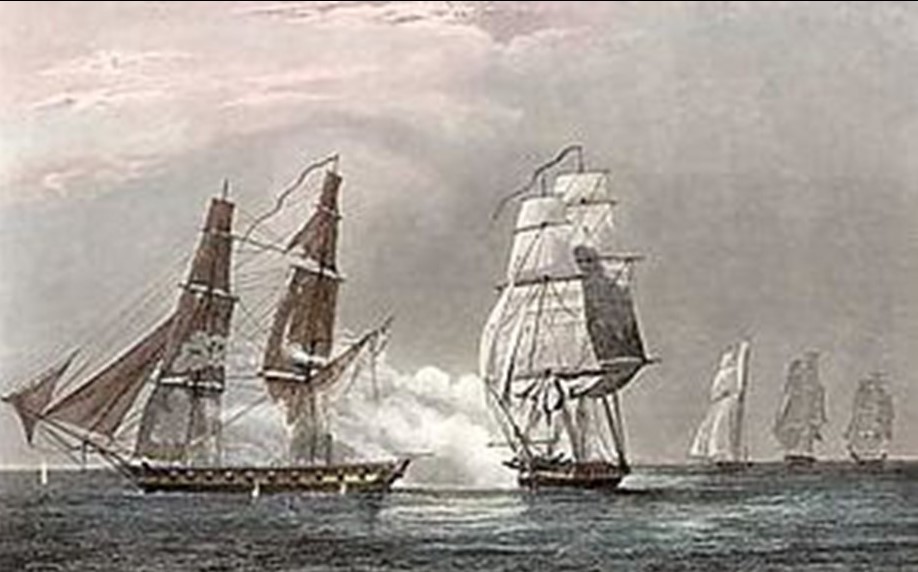 On 16 July two French vessels came out to engage the Swallow – the Renard, armed with fourteen 24-pounder carronades and two long 6-pounders, and the schooner Goéland, with twelve long-guns, probably 6-pounders. The brief reference in Wikipedia describes the action that followed as “sanguine but inconclusive” and so too it must have been considered in various official accounts also, just another small and all-but-forgotten engagement in a larger conflict. A more detailed account however in a book by the 19th-century Admiral Edward Giffard brings the savagery of the encounter to life and tells of the human cost in poignant detail. 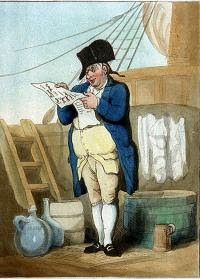 In smooth water and low wind, Commander Sibley “waited with confidence” for the French vessels to approach HMS Swallow on either side before unleashing both broadsides at 50-yards range. The French closed and made four separate attempts at boarding, all of them repulsed, while Sibley attempted to manoeuvre HMS Swallow between his attackers and the French coast. With head-braces shot away the Swallow’smanoeuvrability was badly impaired and after forty-five minutes of furious action Sibley broke off the engagement and the French retreated to the cover of their shore-batteries. Sibley’s conduct was admired so highly by Admiral Sir Edward Pellew, the Commander-in-Chief of the Mediterranean Fleet – and himself no stranger to furious close-action – that he was promoted to coveted “post rank”.

These care facts do not however convey the full  heroism and horror of the action, as the following demonstrates.

Admiral Giffard’s book refers to “a private letter of the day” – presumably from one of the officers –that indicates that one of the heroes of the action was HMS Swallow’s purser, a Mr. Ryan.  Pursers were often not highly regarded with many being suspected – perhaps with good cause – of dishonesty, misappropriation of supplies and general peculation. Ryan proved however to be a much more sterling character.  Early in the battle “his hat was shot off and he fell, apparently mortally wounded. His servant, an old marine, took him up in his arms and was carrying him below, but before he got on the ladder Mr. Ryan, who had suffered no real injury, recovered sufficiently to ask whither he was taking him; on hearing it was to the cockpit, he desired his weeping servant to take him back up again, as he was unhurt, and the blood with which he was covered was not his own.”

Purser or not, Ryan now took charge of some of the carronades – the officer responsible having had his leg taken off by a shot. He got the crew to load with double charges of canister – 64 pounds per gun of small projectiles. The crews were “mad to fire” but Ryan said “he would not fire a gun until he rubbed their muzzles against her (Reynard’s) sides.” He then ordered a bag of   musket balls – another 32 pounds – to be rammed home into each gun, bringing the total to 96 pounds (43.5 kilograms!) in each. The result, when Ryan finally gave the order to fire, was not surprising: “the volley proved so effective that not a Frenchman was to be seen on deck, and the Reynard made every effort to escape from the deadly combat.” 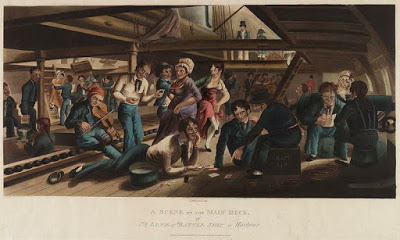 Another stereotype: women on board, especially in port, are usually depicted as prostitutes. In actuality many went to sea with their husbands and performed valuable – and heroic – service, as Mrs. Phelan demonstrated

The most surprising aspect of the action is however that at least one woman was on board HMS Swallow. This was a Mrs. Phelan, the wife of one of the seamen. (As Ryan and Phelan are common names in Ireland’s County Tipperary, one wonders if there was some link between the two men.) Giffard’s account does not make any wonder of her presence, and indeed seems to accept it as normal, remarking that “she was stationed (as is usual when women are on board in time of battle) to assist the surgeon in the care of the wounded.” This splendid lady was not content to say below however – “the wounded, as may be expected, were brought below very fast; amongst the rest a messmate of her husband’s (consequently of her own) who had received a musket ball through his side. Her exertions were being used  to console the poor fellow, who was in great agonies and nearly breathing his last, when by some chance her husband was wounded on deck.; her anxiety and already overpowered feelings could not one moment be restrained; she rushed instantly upon deck and received the wounded tar in her arms; he faintly raised his head to kiss her; she burst into a flood of tears, and told him to take courage as ‘all would yet be well’; but has scarcely pronounced the last syllable when a shot took her head off.” Her husband was already badly injured and “the poor fellow, who was closely wrapt in her arms, opened his eyes once more, then closed them forever.”

This was not the end of the tragedy. “What rendered the circumstance more affecting was that the poor woman had only three weeks before given birth to a fine boy, who was thus in a moment deprived of both father and mother.” After the battle there was much concern that the baby – named Tommy – would not survive. “All agreed that he should have a hundred fathers, but what was the substitute for a (wet) nurse and a mother? However, the mind of Humanity soon discovered that there was a Maltese goat on board, the property of the officers, which gave an abundance of milk, and, as there was no better expedient, she was resorted to for the purpose of suckling the child who, singular to say, is thriving and getting one of the finest little fellows in the world; and so tractable is his nurse that she lies down when little Tommy is brought to be suckled by her.”

One aches to know what became of little Tommy – Giffard says nothing about him – and one hopes that he had a long and happy life. Of his parents’ end there is however no doubt: “Phelan and his wife were sewed up in one hammock, and it is needless to say were buried in one grave.”

We don’t even know Mrs. Phelan’s Christian name. By all means let us remember and honour the Nelsons and Cochranes and Pellews, but let’s remember Mrs. Phelan too. Her courage puts her in their company.