The (now) fifth novel in the Dawlish Chronicles series, Britannia’s Spartan, is set in Korea in 1882 when internal pressures and great-power interventions plunged the country into riot and chaos. A malign role is played by the “Daewongun”, the father of the weak King Gojong. Initially regent for his son, this callous man sought subsequently to dominate the spineless monarch even after he had come of age. The only Korean who later emerged at a later stage to counter the Daewongun’s power was the King’s clever, brave and ruthless wife, Queen Min. The merciless contest between her and her father-in-law was to play out over two decades and would end only with the brutal murder of one of them. Even before that, the Daewongun’s atrocious behaviour had triggered intervention of the French Navy in Korea in 1866, as is related in this article. 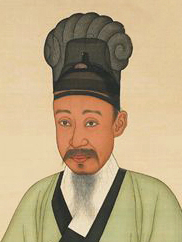 During the 1860s the Daewongun’s prime concerns was maintenance of Korea as “The Hermit Kingdom”, cut off as far as possible from the outside world and maintaining traditional structures and culture unchanged. Though nominally a vassal state of the Chinese Empire, contacts with China did not challenge such structures or values. Powerful political and economic forces were at play in the area however. China had proved itself incapable of withstanding pressures brought to bear on it by Britain and other powers and was in a quandary – which would not be resolved for decades – as to whether to embrace Western models of industrialisation, government and economic development.

Japan, by contrast, despite initial doubts, and even civil war to decide them, had already committed to a transformation that would make it a major military, naval and industrial power by the end of the century.

From both Asian countries, the lesson was obvious – continued isolation from global trends would be impossible. By 1882 Yi Ha-ung (1821-1898), the Daewongun – a title meaning “Prince of the Great Court” – had been a near-dominant player in internal Korean politics for some eighteen years, ever since his infant son had succeeded to the throne. (Question: Why wasn’t the Daewongun king himself? Answer: Complex succession rules excluded him from the post). Cruel, vindictive and cold-bloodily effective, a thoroughly nasty piece of work by any standards, Yi Ha-ung was to prove adept in playing off internal and external forces against each other.

A key factor in the Daewongun’s isolationist policy in the 1860s was concern for the challenge presented to traditional Confucian beliefs – and as a consequence, authority-structures also – by the arrival of Catholic missionaries. Some had arrived from China in the late 18th Century but their impact only became significant from the 1840s when members of the French Société des Missions étrangères de Paris began to arrive in greater numbers and to make substantial numbers of Korean converts. Many such missionaries were to be executed – often savagely – in China, Indo-China and Korea, but this proved no deterrent to the insanely courageous men who took on this work. No less heroic were their converts, who remained faithful to their new beliefs and were murdered in much greater numbers in successive persecutions. 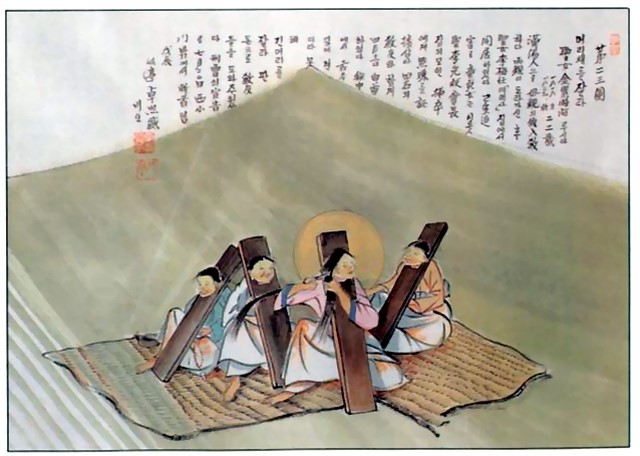 Korean converts in detention – note the boards fastened around their necks

By 1860 the number of Korean converts were estimated as some 20,000, despite persecution campaigns in 1839 – when a French bishop, Laurent Imbert ,was tortured and beheaded, as were many Koreans – and 1846, when the first native Korean priest was executed. Some estimates of the number of Korean Christians murdered during the century are as high as 10,000. It is against this background that the Daewongun launched a new wave of persecution soon after acceding to the regency in 1864. By this time another French bishop,  Siméon-François Berneux (1814 –1866), had been appointed to Korea – and was working in a semi-clandestine way with the support of twelve other French missionaries. 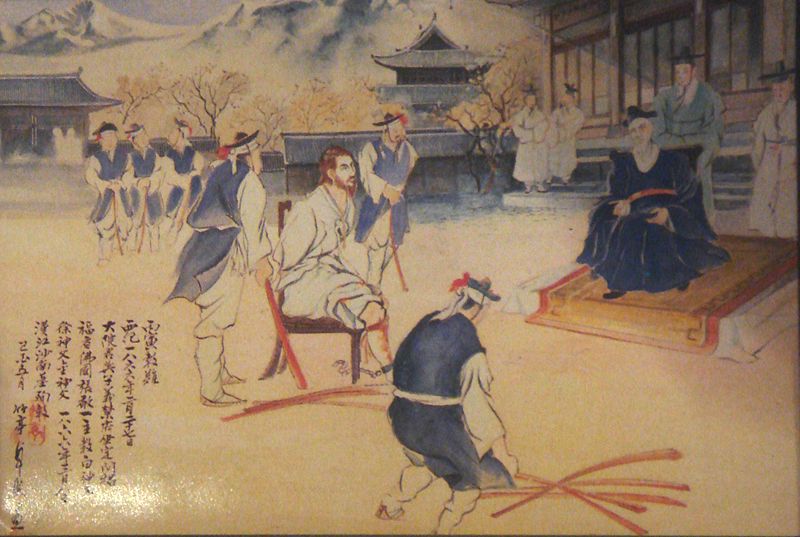 The Daewongun found his pretext for action in early 1866 when vessels of the Russian Navy arrived on Korea’s East Coast and demanded trading rights, including residency provisions for traders. There were obviously similarities to the United States’ “Opening Up” of Japan in the mid-1850s, and to Western nations securing unequal trading and extraterritoriality rights in China. Concerned about Russian intentions, a number of Korean Christians saw this as an opportunity for urging a Korean-French alliance to withstand further incursions.  Bishop Berneux appears to have been mentioned as a possible intermediary. The Daewongun seems to have been open initially to such suggestions but this may have been a trick to bring the all-but-underground church into the open. Berneux was invited to the capital, Seoul, but on arrival, in February 1866, he was imprisoned, tortured and beheaded. 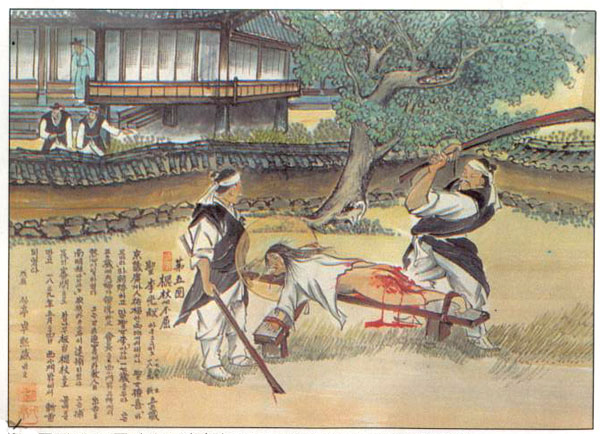 A round-up now commenced of the other missionaries – nine of the twelve – and they suffered equally gruesome fates. The burden fell heaviest on the Korean Christians however, being slaughtered by the thousand along the Han River, close to Seoul. One of the three missionaries who had evaded execution, Felix-Claire Ridel, escaped to by a fishing vessel to Tianjin (then known as Tientsin) in Northern China in early July 1866.

La Guerriere, seen at Nagasaki in 1866

The timing of Ridel’s arrival was providential since the commander of the Far Eastern Squadron of the French Navy, Rear Admiral Pierre-Gustave Roze, was present in Tianjin with the powerful frigate La Guerriere., Informed of the murders – which could only be construed as an insult to French honour – Henri de Bellonet, the French representative at the Imperial Chinese court in Beijing (then Peking), some 80 miles from Tianjin, instructed Admiral Roze determined to mount a punitive expedition against Korea. The decision was most likely also influenced by the fact that there had been attacks on Westerners in China in the same period, and effective action against Korea was likely to send a strong message there also. 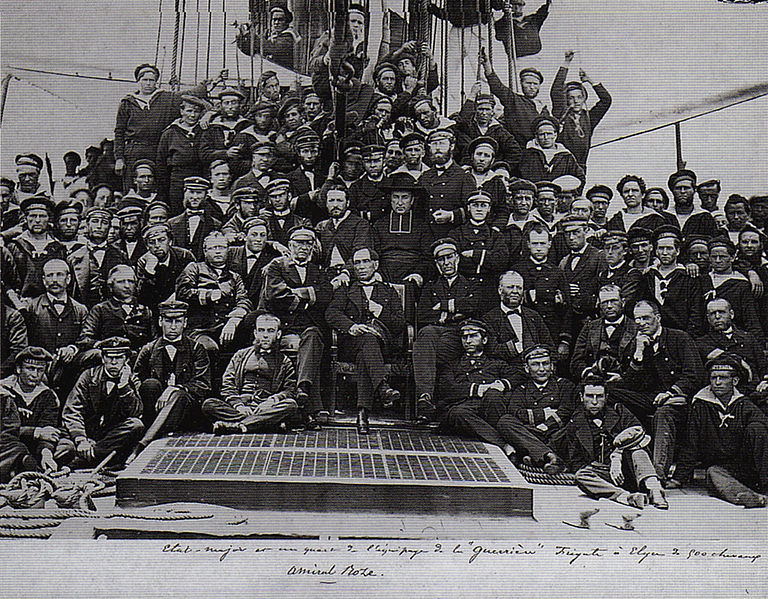 Roze now set about organising his expedition, a major hazard to which was lack of charts of Korea’s highly indented western coast with its many navigational hazards.  Attention was focussed instead on the offshore island of Ganghwa, at the mouth of the Han River, occupation of which would cut off export traffic to the sea from the Korean interior in the harvest season. A powerful French force – La Guerriere, the corvettes Laplace and Primauguet, the gunboats Lebrethon and Tardif and two despatch vessels, Kien–Chan and Déroulède, was concentrated at the port of Yantai (then known as Chefoo) on the Shantung Peninsula, almost directly across the Yellow Sea from Ganghwa and Seoul. Marines and other troops available allowed for a French landing force of 800. 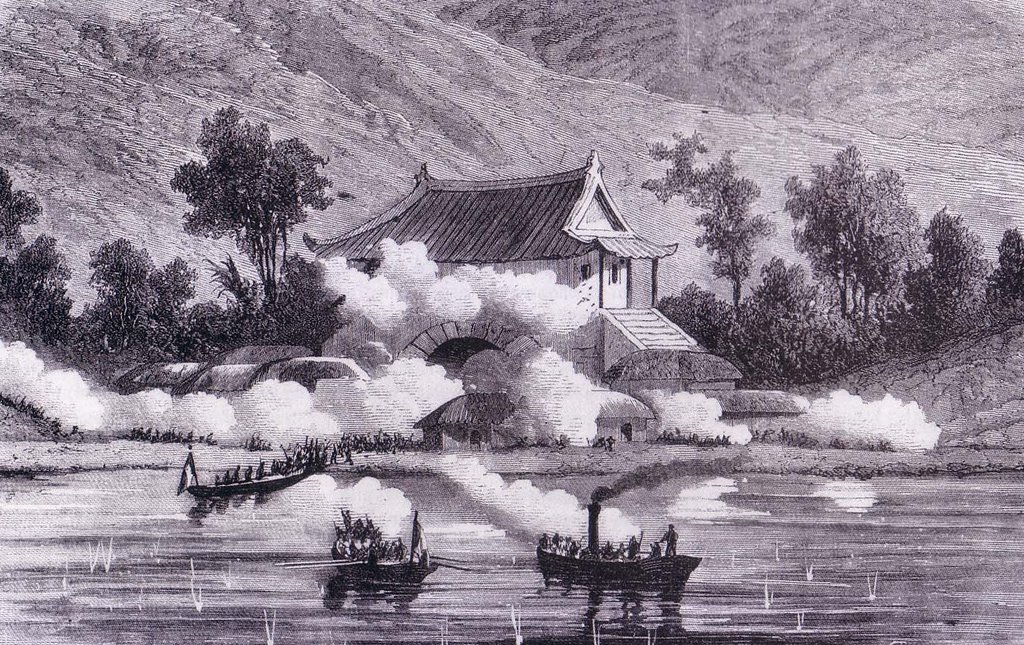 On 11th October Roze’s force bombarded the Korean fortifications on Ganghwa which dominated entrance to the Han. These were subdued despite resistance and marines were landed to secure them. The occupation was to last six weeks. Early the following month, with access to the Han clear, the lighter French vessels pushed upriver towards Seoul, some 40 miles distant. On the way, several more fortifications were subdued and a significant amount of looting seems to have taken place. Arriving at Seoul, Admiral Roze demanded surrender of the two surviving French missionaries and reinforced his request with a bombardment of official buildings on 11th November. Results were immediate – the Daewongun released the French priests. Honour satisfied, Roze dropped back downriver, but not without inflicting further damage to property as a reminder of the inadvisability of challenging French prestige again. Forces were withdrawn from Ganghwa and the expedition was at an end. 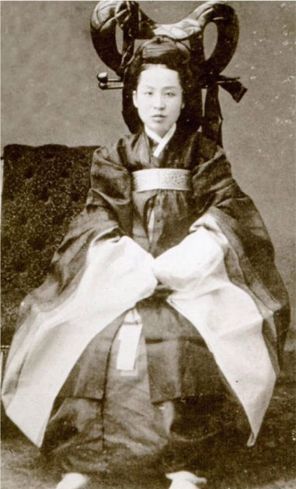 Small-scale, and limited in its objectives as it was, Roze’s foray served notice that further Korean attempts to maintain its isolation would be futile. In the coming years, the nation would experience similarly-minor incursions by American forces and in the 1870s and 1880s it was to find itself the focus of Chinese, Russian and – most of all – Japanese intentions to dominate it. The history of these decades was to be an unhappy one, and the Daewongun was to remain a major player, though his power was to be increasingly challenged by Queen Min (1851-1895).  Readers of Britannia’s Spartan will learn how their rivalry took a murderous turn in 1882 (and how the British Naval officer, Nicholas Dawlish, found himself drawn unwittingly into their machinations!)

In 1882, no less than in 1866, a long career of infamy still lay before the Daewongun. We may return to him – and to the somewhat more attractive Queen Min – in a future blog.

And in the meantime, you might enjoy reading Britannia’s Spartan! 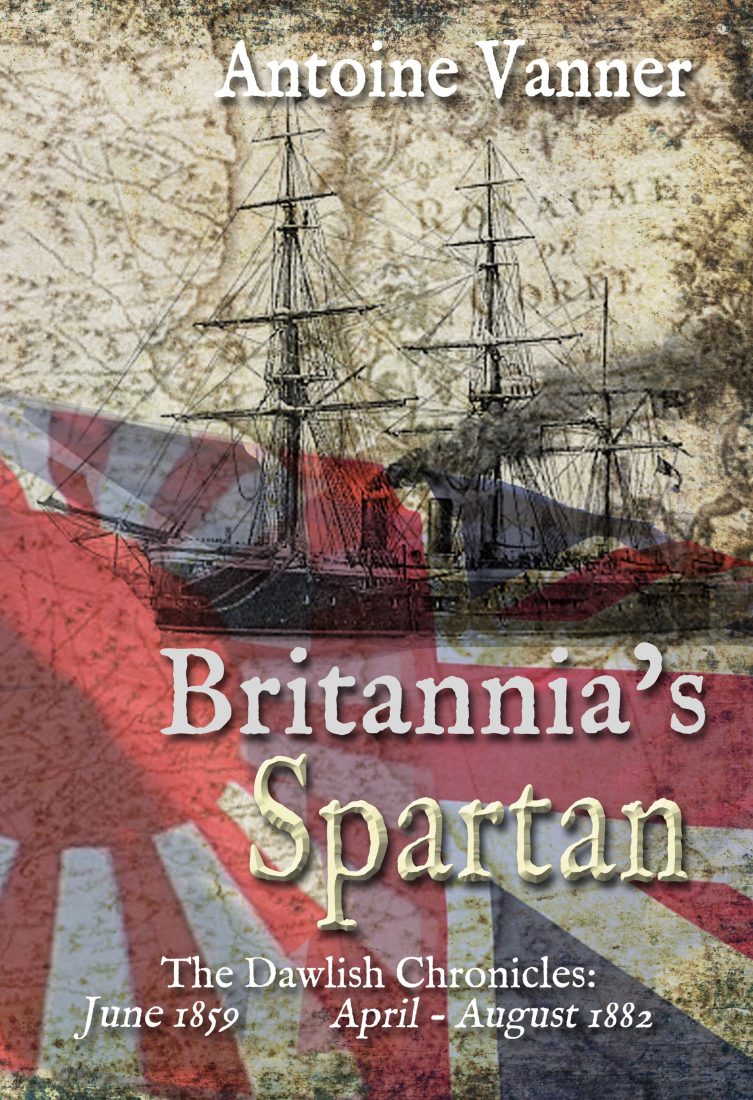 But Dawlish has no forewarning of the nightmare of riot, treachery, massacre and battle that he and his crew will encounter.

A new balance of power is emerging in Asia. Imperial China, weak and corrupt, is challenged by a rapidly modernising Japan, while Russia threatens from the north. They all need to control Korea, a kingdom frozen in time and reluctant to emerge from centuries of isolation.

Below are the nine Dawlish Chronicles novels published to date, shown in chronological order. All can be read as “stand-alones”. Click on the banner for more information or on the “BOOKS” tab above. All are available in Paperback or Kindle format and can read at no extra charge by Kindle Unlimited Subscribers.