Skip to content
Wit and Wisdom of Admiral “Jacky” Fisher

The Wit and Wisdom of Admiral “Jacky” Fisher 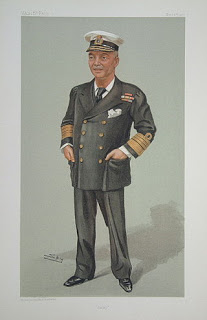 Few men can have had a greater influence on naval warfare than John Fisher (1841 – 1920), later Admiral of the Fleet Lord Fisher. This formidable figure, a human whirlwind, was responsible for building HMS Dreadnought, thereby “making every other battleship afloat obsolete overnight” and for reorganising the Royal Navy in the years before World War 1. He did this in the teeth of strong internal opposition but he brought to the process keen strategic insights as to its composition and disposition. Had his career ended in 1911 at the end of his appointment as First Sea Lord, the professional head of the Royal Navy his reputation would have been greater still. It was unfortunate that, at the age of 73, he was reappointed to this same position in 1914. Well past his best, he held it, in increasing rancour with his political opposite number, Winston Churchill, until he resigned in connection with the catastrophe that had developed in the Dardanelles operation against Turkey.

The fascination of Fisher’s career is that he entered a navy of wooden ships and smoothbore cannon, commanded by veterans of the Napoleonic era, but he went on to create a steel navy that employed big guns, torpedoes, radio, submarines and aircraft. His nomination to the Navy, at the age of 13, was by Admiral Sir William Parker (1781 – 1866), the last survivor of Nelson’s captains. Readers of The Dawlish Chronicles series will find several references to Fisher, including Nicholas Dawlish’s first meeting with him at the Storming of the Taku forts in China in 1859 (in “Britannia’s Spartan“ – click for details). 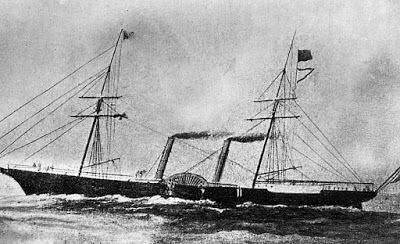 The paddle dispatch vessel HMS Coromandel in the Far East
She was Fisher’s first command,, a temporary one – and he was just 19 years old 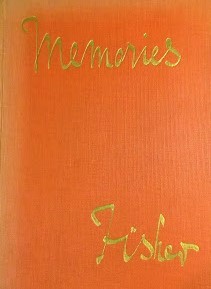 This article is not an account of Fisher’s life, but  deals rather with Fisher’s “Memories” – note, not “Memoirs” – which he wrote in the year before his death. I found a copy in a second-hand bookshop some 40 years ago and I’ve been dipping into it since as it is not only of great historical interest but is vastly entertaining to boot. It can be best described as a “brain-dump”, with reminiscences, statements of opinion, proverbs, aphorisms and much else all mixed up in no particular order. I haven’t encountered any comparable book ever. One suspects that the full veracity has be treated with some caution – Fisher’s memory was perhaps failing even if his energy and vehemence remained undiminished. Few other eminent figures can have referred in a published book to “Some venomous reptile (his name has disappeared – I tried in vain to get hold of it)”, or to human “limpets, parasites, sycophants, and jellyfish”, even if they would have liked to have done so.

What follows are direct quotes. I’ve concentrated on Fisher’s opinions (in some cases obsessions). The preface gives a foretaste, and Fisher’s full use of fonts available merits it being shown in a direct scan. It can also be noted that he was addicted to using exclamation points!!! 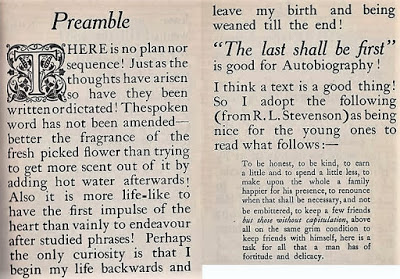 Fisher mentions at the beginning of the book that he started work on 7th September 1919. He states:

“My reluctance to this book being published before my death is increasingly definite; but I have put my hand to the plough, because of the overbearing argument that I cannot resist, that I shall be helping to:

Avert the insanity and wickedness of building a Navy against the United States.

Establish a union with America, as advocated by John Bright and Mr.(Theodore) Roosevelt.

Enable the United States and British Navies to say to all other Navies “If you build more, we will fight you, here and now. We’ll ‘Copenhagen’ you*, without remorse.”

This is why I have consented, with such extreme reluctance, to write letters to The Times and dictate six articles; and having thus entered into the fight, I follow the advice of Polonius – Vestigia nulla retrorsum (We Do Not Retreat).   And so, today, I will begin this book – not an autobiography, but a collection of memories of a lifelong war against limpets, parasites, sycophants, and jellyfish – at one time there were 19 and ½ millions sterling of ’em’. At times they stung ; but that only made me more relentless, ruthless and remorseless.”

(* by “Copenhagening” Fisher meant launching a direct strike, if necessarily without declaration of war, as the Japanese did at Port Arthur in 1904. One story is that he proposed doing this to the German Navy to King Edward VII who, not surprisingly, told him “Fisher – You’re Mad!” – Antoine Vanner)

Fisher was proud of being emphatic in manner. Even King Edward VII did not escape: “The man who reads this in his arm-chair in the Athenaum Club would take it all quite differently if I could walk up and down in front of him and shake my fist in his face.”

(It was a lovely episode this recalls to my mind. King Edward- God bless him! – said to me once in one of my moments of wild enthusiasm:“Would you kindly leave off shaking your fist in my face? ”) 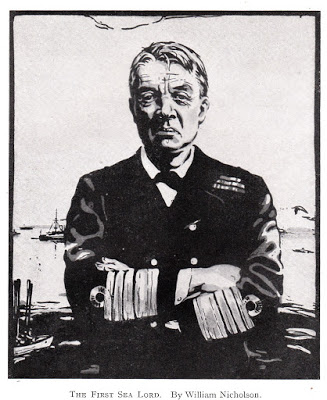 “I tried once, so as to make the dead print more lifelike, using different kinds of type-big Roman block letters for the “fist-shaking,” large italics for the cajoling, small italics for the facts, and ordinary print for the fool. The printer’s price was ruinous, and the effect ludicrous. But I made this compromise and he agreed to it -whenever the following words occurred they were to be printed in large capitals: ” Fool,” “Ass”, “Congenital idiot.””
“Myself, I don’t know that I am singular, but I seldom read a book. I look at the pages as you look at a picture, and grasp it that way. Of course, I know what the skunks will say when they read this -“Didn’t I tell you he was superficial ? And here he is judged out of his own mouth.”

One particular Chapter heading is irresistible:

BOWS AND ARROWS – SNAILS AND TORTISES

An entire chapter, entitled “THINGS THAT PLEASE ME” is  a mixture of insights of genius, common sense, obsessions and just about anything that came into his head. Here’s a selection, separated as Fisher listed them.

Thou shalt not kill, but needst not strive, Officiously to keep alive! (When catching Submarines)

“Put on the impenetrable armour of contempt and fortitude.”

Never fight a Chimney Sweep; some of the soot comes off on you.

“Liberty of Conscience” means doing wrong but not worrying about it afterwards.

” Tact” is insulting a man without his knowing it.

Even a man’s faults may reflect his virtues.

Sincerity is the road to Heaven.

Think in Oceans – shoot at sight.

Napoleonic in Audacity,
Cromwellian in Thoroughness.
Nelsonic in Execution.

“Surprise” –  the pith and marrow of war!

Rashness in War is Prudence.

Prudence in war is Imbecility.

The 3 Requisites for Success – Ruthless, Relentless, Remorseless (The 3 R’s)

BUSINESS – “CaIl on a Business man in Business hours only on Business. Transact your Business and go about your Business, in order to give him time to finish his Business, and you time to mind your own Business”. ([I had this printed on cards, one of which was handed to every caller on me at the Admiralty.]

The Nelsonic Attributes –
(a) Self Reliance.
(b) Power of Initiative.
(c) Fearlessness of Responsibility.
(d) Fertility of Resource.

Originality never yet led to Preferment.

Mediocrity is the Road to Honour.

The Pavement of Life is strewn with Orange Peel.

Inconsistency is the bugbear of Silly Asses.

The Best Scale for an experiment is 12 inches to a foot.

Dean Swift satirized the vulgar exclusiveness of those who desired the infinite meadows of Heaven only to be frequented by the religious sect they adorned on earth:
“We are God’s chosen few!
All others will be damned!
There is no place in Heaven for you,
We can’t have Heaven crammed!”

Dread Nought is over 80 times in the Bible so I took as my motto “Fear God and Dread Nought!”

If as is often said, Genius and Madness are not far apart , then Fisher was a splendid example – Antoine Vanner

(which opens with Nicholas Dawlish first meeting Jacky Fisher in 1859)

And then jump on to 1882: Captain Nicholas Dawlish RN has just taken command of the Royal Navy’s newest cruiser, HMS Leonidas. Her voyage to the Far East is to be a peaceful venture, a test of this innovative vessel’s engines and boilers.

But Dawlish has no forewarning of the nightmare of riot, treachery, massacre and battle that he and his crew will encounter. 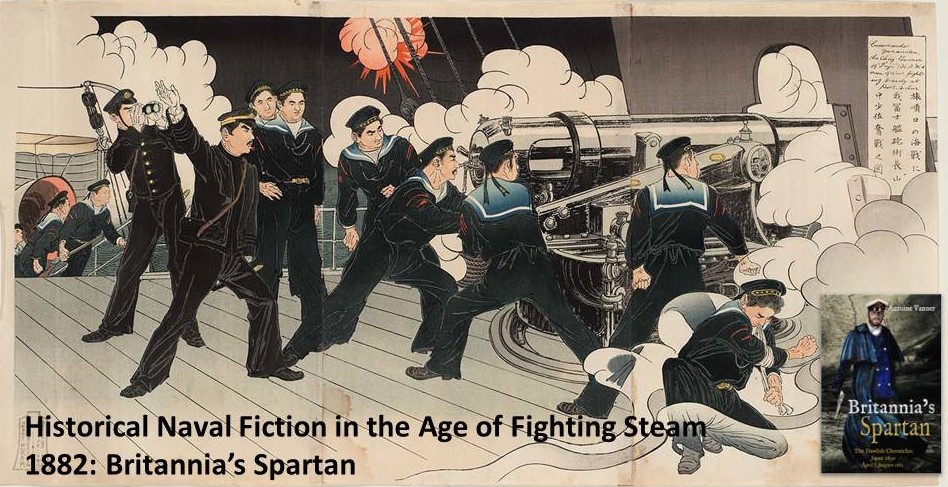 A new balance of power is emerging in Asia. Imperial China, weak and corrupt, is challenged by a rapidly modernising Japan, while Russia threatens from the north. They all need to control Korea, a kingdom frozen in time and reluctant to emerge from centuries of isolation.

Click on the image to buy in paperback or Kindle format. And if you’re a Kindle Prime or Kindle Unlimited subscriber you can read it, or any Dawlish Chronicles novel, at no extra charge