HMS Proserpine was a 28-gun Enterprise-class frigate that entered Royal Navy service in 1777. Her career up to 1799 was worthy but unspectacular.  In January 1799 when commanded by Captain James Wallis, she was tasked with carrying the diplomat Thomas Grenville (1755 –1846) on the first leg of his journey to the British Embassy at Berlin, the Prussian capital. This meant dropping him at Cuxhaven, on the west side of the vast estuary of the River Elbe. In that era, before dredged channels had arrived, sandbanks and shoals made navigation in the area difficult and necessitated the services of an experienced pilot. 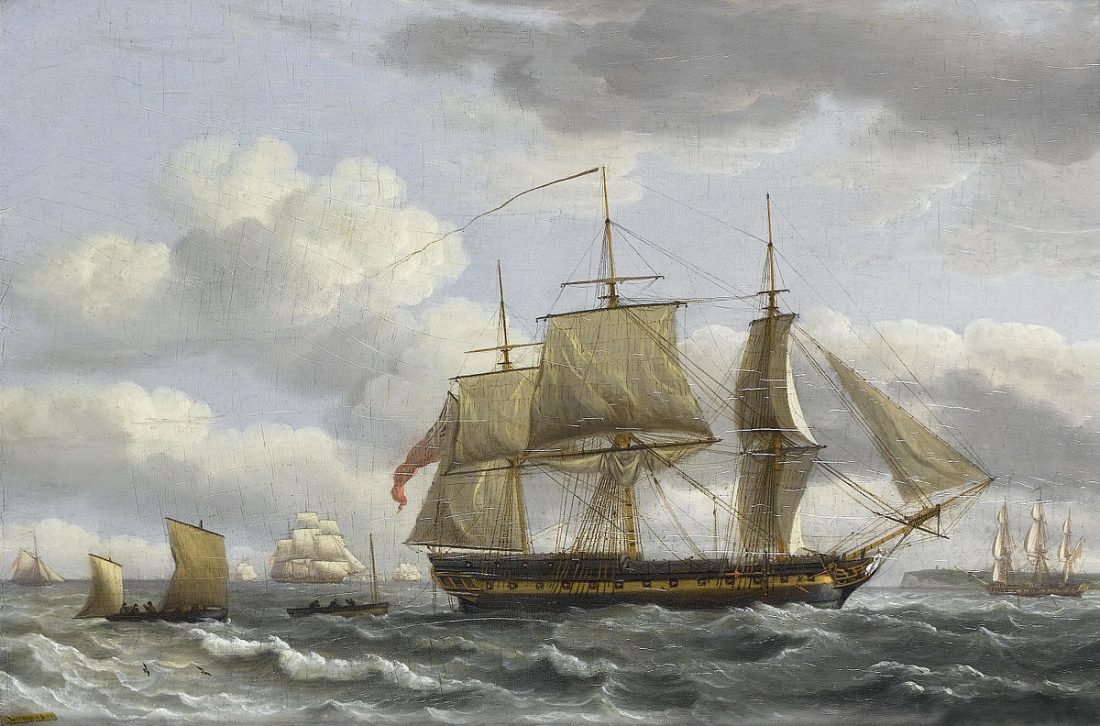 HMS Proserpine sailed from Yarmouth on 28th January 1799, a mail packet, the Prince of Wales, sailing with her. They arrived off the island of Heligoland – then held and fortified by Britain – two days later and HMS Proserpine took a pilot on board there. A buoy, “the Red Buoy” marked the entrance to the navigation channel, and there both vessels anchored for the night. The other buoys that marked the approaches to the Elbe estuary had been removed to hinder access by hostile forces. Captain Wallis expressed doubts about proceeding further. The pilot was confident however that he would be capable of reaching Cuxhaven as long as the effort was made between half-ebb and half-flood tide, as the lowered water levels would expose sandbanks and show the necessary access channel.  He would be further assisted by sight of known landmarks. Wallis yielded and the next morning HMS Proseprine began her passage up the Elbe, proceeded by the Prince of Wales.

All went well until late afternoon, when light was fading. Fog descended, snow began to fall and the pilot could not see his landmarks. HMS Proseprine anchored.  In late evening however a strong gale swept in from the east, accompanied by heavy snow.  The tide was soon following the direction of the wind and huge masses of ice began to strike the ship. Great effort was needed to fend off the ice from the anchor cables and HMS Proseprine managed to hold her ground.

Daylight revealed floating ice stretching far up the river and also that the Prince of Wales had grounded. The water was still clear seawards, so Wallis decided to retreat and to land his diplomat passenger at some other, safer, location. With no other canvas than her fore-topmast stay-sail, HMS Proserpine ran before a strong wind. All danger was supposed to be past, when, about half-past nine she struck with immense violence on the Scharhörn, a large sandbank some six miles north-west of the tiny but inhabited island of Neuwerk. Soundings indicted only ten feet of water. Boats were launched to carry out an anchor so that the vessel could be winched off but the arrival of more drifting ice prevented it. 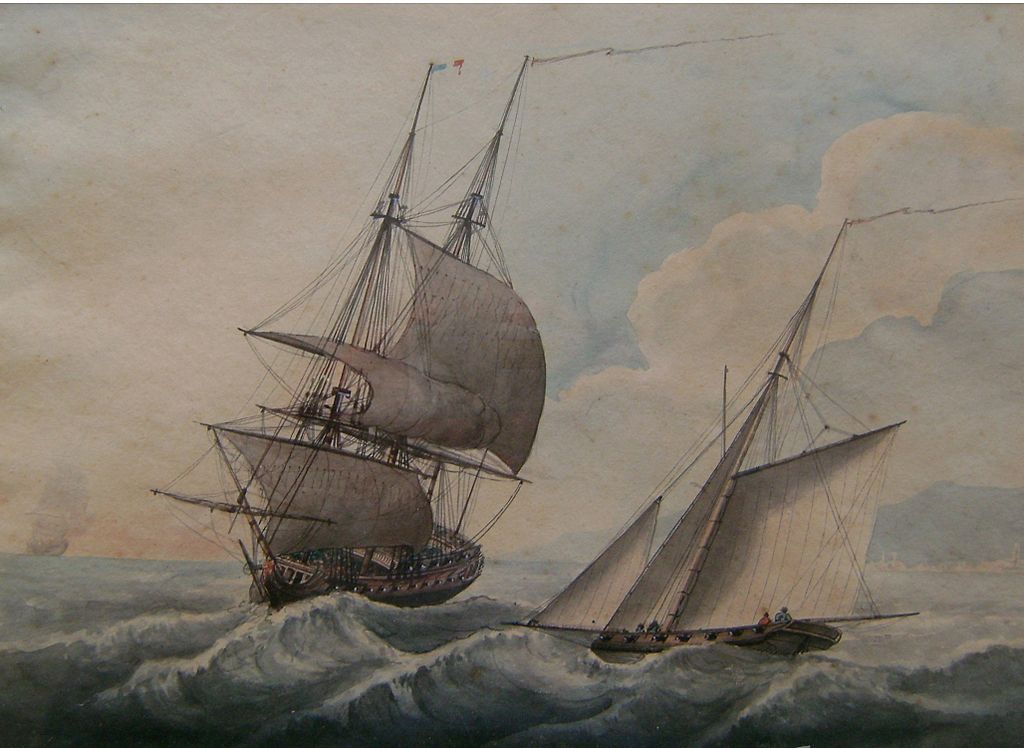 Captain Wallis then ordered out the boats to carry an anchor to some convenient point of the shore; but the shoal-ice returned so rapidly that this could not be done. He ordered buttressing along each side with strong timbers set against the seabed to preen the hull heeling over. (One is impressed by the ingenuity and resourcefulness of this man in such a situation). It worked – when the tide fell, the frigate remained upright and hope rose that she might be floated off with the next rising tide. When this came however it brought huge masses of ice, enough to tear away the buttressing, strip the copper off the starboard quarter, and smash the rudder. Captain Wallis still hoped to drift off at high tide and ordered lightening by casting guns and supplies overboard. A Victorian writer was later to comment with admiration on the fact that though casks of wines and spirits were stove in, not a single case of intoxication occurred. This probably does as much credit to Wallis and his officers as much as to the men. HMS Proseprine was clearly a well-disciplined ship with high crew morale, as later events were to show.

Despite the lightening, the frigate did not lift clear at high-water. By late evening, when the tide should have been flooding, the south- easterly gale was so strong as to drive the waters back and leave her in even shallower water than when she had first struck bottom. The pounding by the ice continued and it was clearly only a matter of time before the vessel broke up. Darkness and snow enveloped her and the decks were so icy that it was all but impossible to retain a foothold. By morning the situation was worse still for the wind was yet higher. Drifting ice had reached as high as the cabin-windows and was pounding so hard that the ship was soon likely disintegrate.

Destruction by ice – remains of ship in foreground. An illustration of how ice blocks can build up. A painting by Kasper David Friedrich (1774 – 1840), inspired by the loss of one of William Edward Parry’s ships during his North West Passage expedition in 1825

Thomas Grenville, the diplomat, now suggested that the only hope of escape was to cross the ice to Neuwerk Island. Captain Wallis agreed reluctantly.  He divided the crew into four companies, each commanded by an officer. They carried ropes and planks for bridging chasms in the ice and each man took his own provisions with him. By three in the afternoon the last party departed, led by Wallis and a Lieutenant Ridley of the marines. They had to head into the wind, faces stung with flying ice particles, eyes blinded by driving snow. Only availability of a pocket-compass kept them on track. At some points they had to wade waist-deep through snow drifts, at others through deep pools of water, and at others still had to clamber over ice blocks. This appalling trek is a reminder of how much the climate of Northern Europe has changed since then – indeed seventeen years later would come “The Year Without a Summer” that would cause so much hardship).

The experience must have been worst of all for the two women in the party, both wives of seamen. One had actually given birth to a still-born child on HMS Proserpine’s first day out from Yarmouth and was still recovering. The other woman, described as “strong and healthy, and accustomed to a seafaring life” had a nine-months old baby with her. She and her infant died of exposure but the other woman survived, reaching Neuwerk Island in darkness. The resident community was tiny but it took the survivors in and did what it could for them. 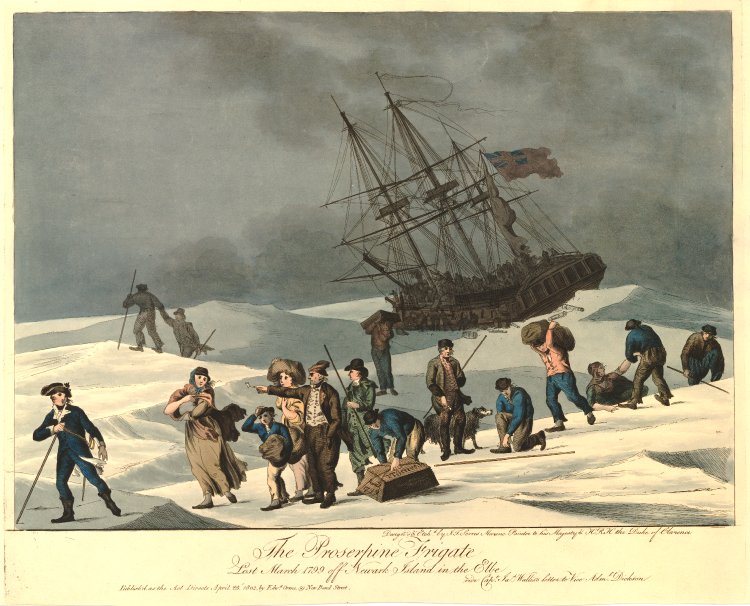 The nightmare trek across the ice from HMS Proserpine to Neuwerk Island. Note the lady carrying the baby and the other lady following.

Despite the horrors of the retreat across the ice, a roll call confirmed that of 187 people who had been on board the frigate all but sixteen seaman and the woman and baby had reached the island. Many of the survivors suffered severely from frostbite but all of these ultimately recovered. The blizzard continued for another four days and availability of food and clothing was now a problem – the scanty provisions brought from the frigate were running out.  (Neuwerk Island, even today, has a population of some thirty – it cannot have been much greater in 1799 and the arrival of almost three hundred survivors must have overwhelmed the community’s food resources. The solution was to get as many of the survivors as possible off the island by trekking across the ice to Cuxhaven. Some islanders acted as guides and Grenville was one of the party. Another nightmare journey followed, often wading through water, but in some twelve hours they managed to reach Cuxhaven without loss.

Captain Wallis, with a party of officers and men, had remained at Neuwerk, in the hope of saving a portion of the ship’s stores and a new chapter in this epic saga of survival was about to begin.

We’ll learn about that in the second part of this article, due next week.