Skip to content
The Alzhir Gulag camp for women

A Circle of Hell – the Alzhir Gulag camp for women

This article was published on my previous blog in 2014, following two trips to Kazakhstan. In the light of insights gained and lessons learned from visits to the site of a women’s camp of the Soviet Gulag at Alzhir, I believe it’s the most important subject I’ve ever written about. For this reason I’m repeating it on my present blog platform. It’s a harrowing topic, but it’s one that must never be forgotten and a stark reminder of what Marxism has meant in practice.The threats to Freedom never go away. And Freedom doesn’t come free.

This week’s blog is very different in nature to the topics I usually write about. It reflects a very moving personal experience and I’ve drawn some lessons which are of relevance to us all. I hope you’ll read it to the end. 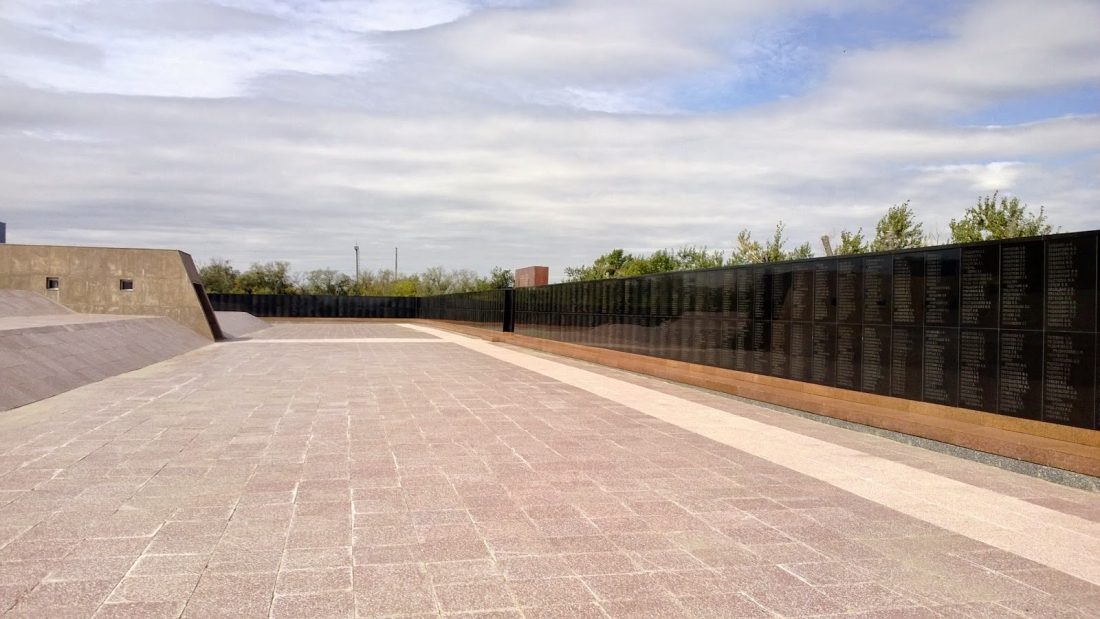 I’m just back from a visit to Astana, capital of Kazakhstan. It’s an amazing place – a new city dropped down into the middle of an empty steppe – and is memorable for its large number of stunning modern buildings. The discovery and development of vast hydrocarbon reserves have provided the revenues for transformation of this former vassal-state of the old Soviet Union and it is now a very self-consciously independent modern state. I had visited previously and what made the greatest – and most moving – impression on me then was not of the city itself but of the Alzhir women’s Gulag memorial about 30 kms outside. I returned on my latest visit and what follows here is an account of what one finds there. 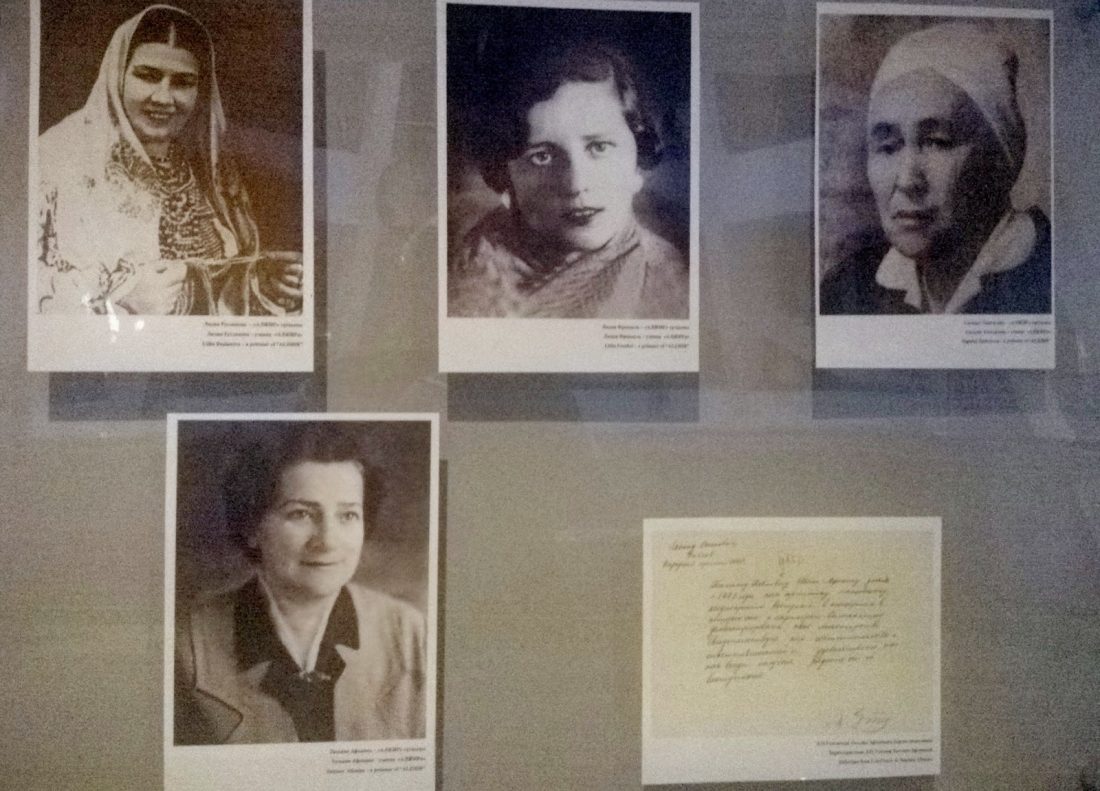 Enemies – by family relationship – of the Soviet system

Kazakhstan is a vast country, the ninth largest in the world in terms of area, and much of it, including where Astana is located, consists of steppe terrain, roughly comparable with prairies in the United States and Canada. The Kazakh steppe is a harsh and difficult place to live – freezing in winter, with temperatures below minus 30 deg C. for long periods, with howling winds and driving snow,  but hot and dusty in summer. 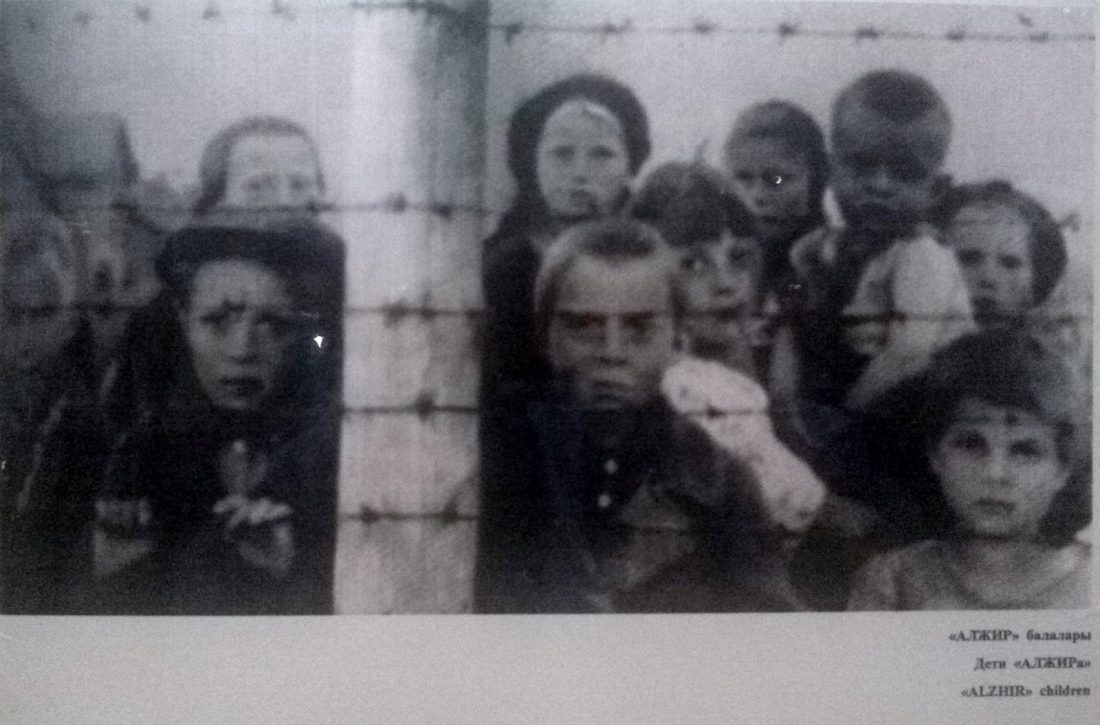 More enemies of the Soviet system – some as old as three

These climatic conditions made Kazakhstan an ideal location for the Gulag labour camps of the Soviet era since the geography and climate were efficient barriers to escape. In the Stalinist period,  especially in the period of the purges from 1936/37 to the death of Stalin in 1953, there were large numbers of such camps, not only for “political prisoners “ – many if not most of whom were convicted on the grounds of suspicion of disloyalty – but for their family members, for returned WW2 prisoners of war (capture by the enemy was regarded as a punishable crime) and for large numbers of Poles deported after the joint Nazi-Soviet invasion of 1939. 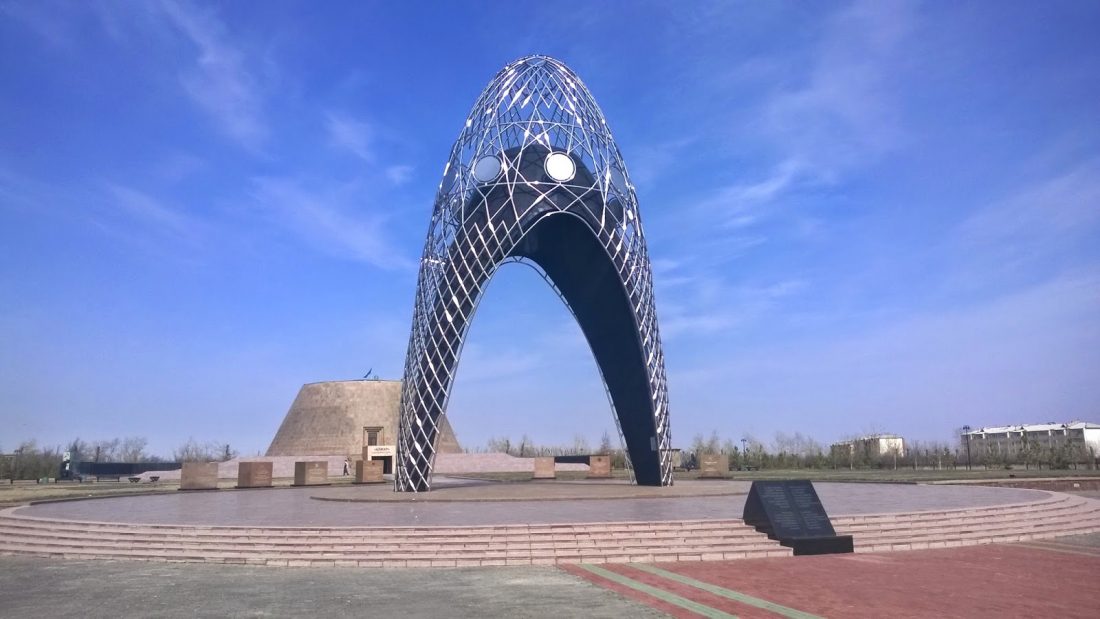 The Alzhir memorial – conical structure is the museum, dark strip behind is the wall of names

The Alzhir memorial is established at a camp for female relations of political prisoners and though the visitor is shocked at what they see it is important to remember that this camp was only one of dozens of such man-made hells in Kazakhstan and elsewhere. Alzhir was however the largest women’s camp in the Soviet Union while it operated from 1937 to 1953 and thousands of women – and their children – passed through it. These people were themselves accused of nothing other than being the wives, mothers, sisters or daughters – even cousins – of people who had been convicted of “betrayal of the Motherland.”  The standard sentence was eight years but, for many, climatic conditions alone could kill them in less than one.  Even very young children were transported to the camp – those under about the age of three staying with their mothers before being taken to separate state orphanages. Pregnancy at time of arrest was no protection and many babies were born in the camp.

Fear of “guilt by association” must have been the most powerful single deterrent to internal opposition to Soviet rule. A man or woman alone might be prepared to risk the consequences of punishment for themselves personally, but most would hesitate when knowing that any action of theirs would draw the full might of repression and imprisonment on other family members, direct and indirect.

As one enters the site – beautiful with planted flower beds when I visited last August, but much more bare now before the spring growth kicks in – one is confronted with a preserved “Stalin Wagon”, the type of railway box car used to transport the women in groups of up to 70 across the vast distances of the Soviet Union, regardless of weather or season.  Bare wooden shelving represented accommodation and heating was by a single iron stove in the centre. Sanitary provision consisted of buckets. 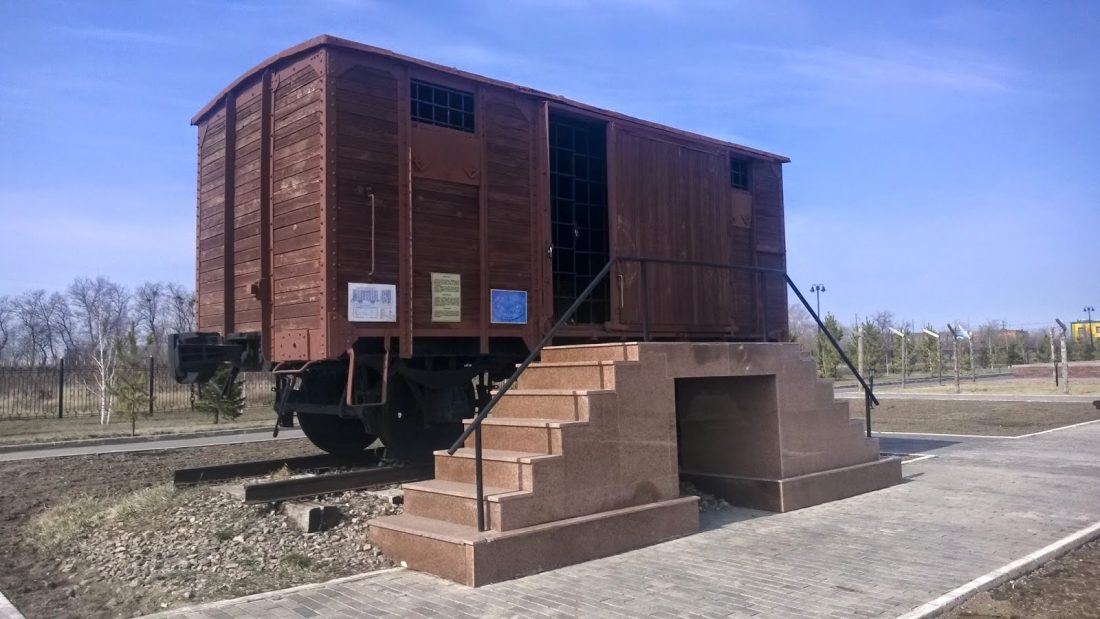 A “Stalin Wagon” – transport for up to 70 women prisoners

The approach to the museum is flanked by the “Arch of Sorrow”, designed in the shape of a traditional Kazakh wedding head dress, and beyond it memorial plaques for victims of from individual Soviet nationalities and from Soviet-ruled countries in Eastern Europe. 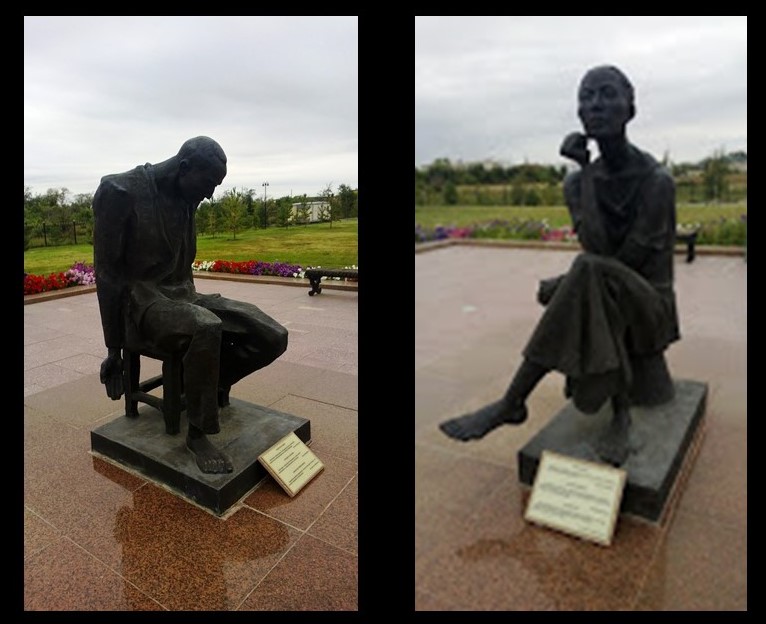 Two statues, one male, one female, symbolise the two extremes of the Gulag experience. A man looks down, broken in despair but a woman, stares into the future,  seeing life beyond current suffering.  Beyond lies the circular museum building, and behind it, most terrible of all, are black marble walls inscribed with the names of thousands of prisoners, some of whom died there, some of whom survived.

The tour of the museum starts with an emotionally-wrenching video in which ex-prisoners, and their children, tell their stories. They came from every background. Some regarded themselves as loyal Communist Party members – the opening testimony is from the surviving sister of Marshal Mikhail Tukhachevsky, the young military genius who had been so successful in the Russian Civil War, and whom Stalin purged as a potential rival, and she lists relations of other “Old Bolshevik” stalwarts. 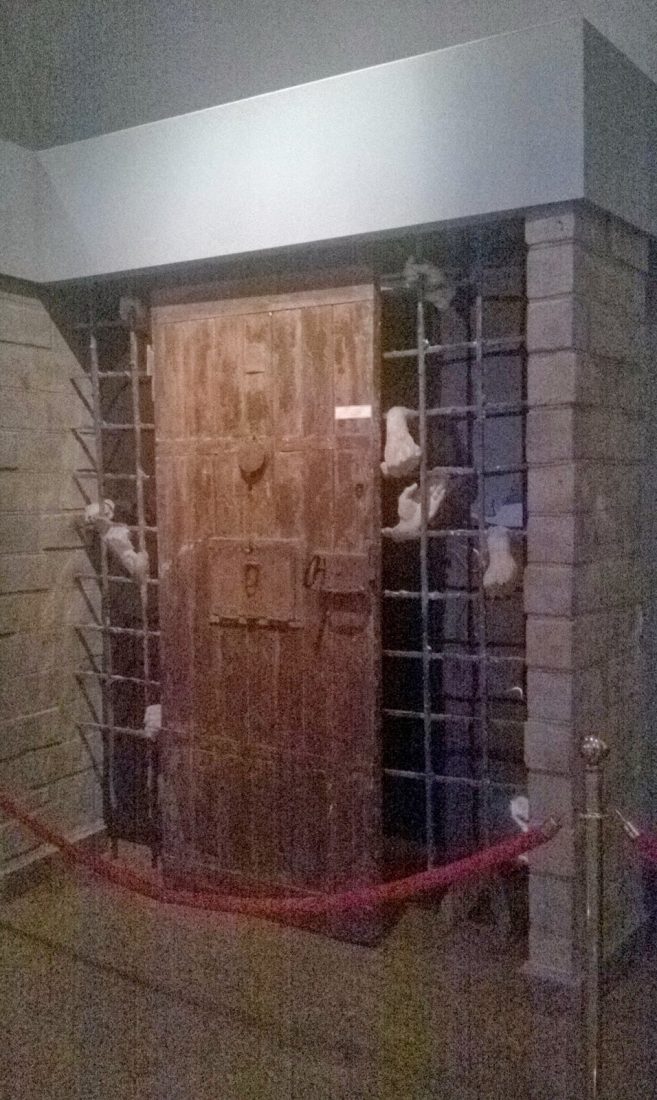 Most prisoners however were of humbler backgrounds and since every citizen was subject to arbitrary arrest, were their loyalty to Comrade Stalin to be suspect, age, occupation or political views – or absence of them – were no protection. The saddest testimonies of all are from surviving children who ended up either in state-run orphanages or were looked after by relatives, and who, like their mothers, made desperate attempts to remain in contact. They remembered the mother they had seen at time of arrest and often failed to recognise the human wreck who survived, if she was lucky, to be released after serving her sentence.

The exhibition about life in the camp starts with a sculpture set around the original door to an interrogation room.  I found the photographs on display to be poignant beyond belief – they show prisoners, a few only , but representing the thousands who suffered there. Most show the women before their arrest – some young, some old, some Russian, others from various Soviet nationalities, some stunningly beautiful, others careworn, but each with her own personality, her own family, her hopes and fears and ambitions, her own right to a decent life. They could be your or my grandmother,  mother, wife, sister, daughter, cousin, aunt. When arrested, many were told they were to meet their arrested family members so they wore their best clothes to the prison and some managed to bring a few personal belongings – a cruel joke to mark their descent into hell.

The women came from all walks of life – famous actresses, accomplished doctors and intellectuals, ordinary women from every part of the Soviet Union.  They were “rehabilitated” after serving  their five to eight-year sentences and.  Some never found their way back to their families however – their relatives and children had died either in the Gulag system or in the war and many of them built new lives for themselves in Kazakhstan.  The last remaining Alzhir survivor still lives in Astana. 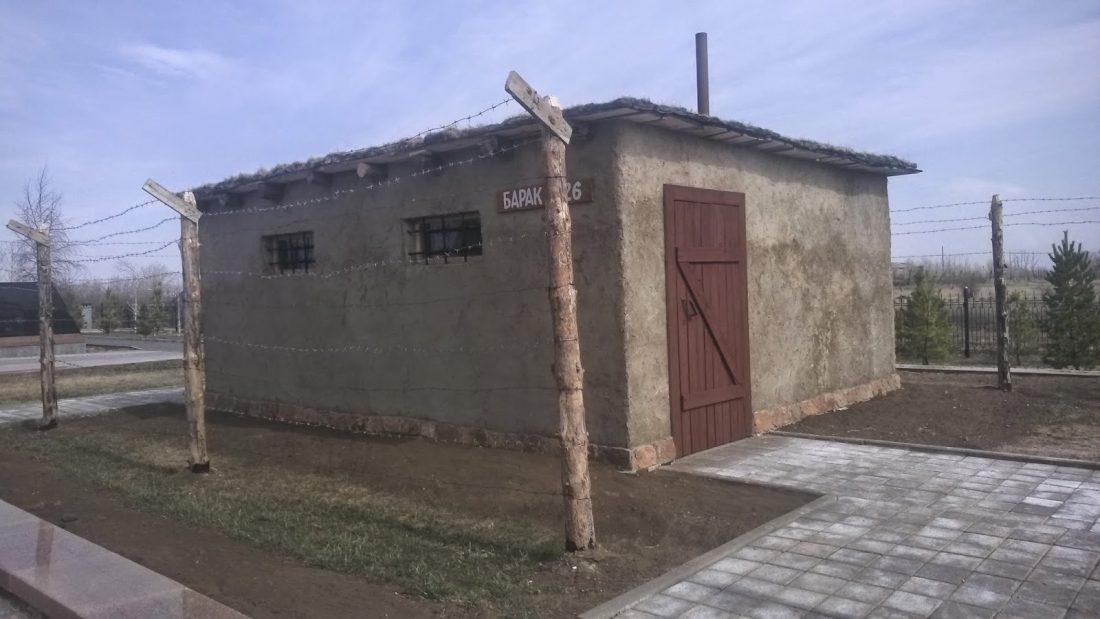 The camp was, and the memorial is, surrounded by a vast open plain, much of it flooded at this time of year, April, after the snows have melted. In 1937 the  first prisoners arrived at an open expanse and had to build their camp from scratch, working up to their waists in water to cut reeds for binding the mud of the adobe bricks used to construct their huts. One such barrack hut has been recreated and inside it is a crude but emotionally powerful life-size diorama showing a 3-year old child being taken from its mother to be sent to an orphanage. The roof consisted of rafters covered by grass sods and there was a single stove. The prisoners slept on rough wooden bunks and during the day many of them worked making uniforms – so much so that the camp received a commendation for its contribution to the Soviet victory in 1945. 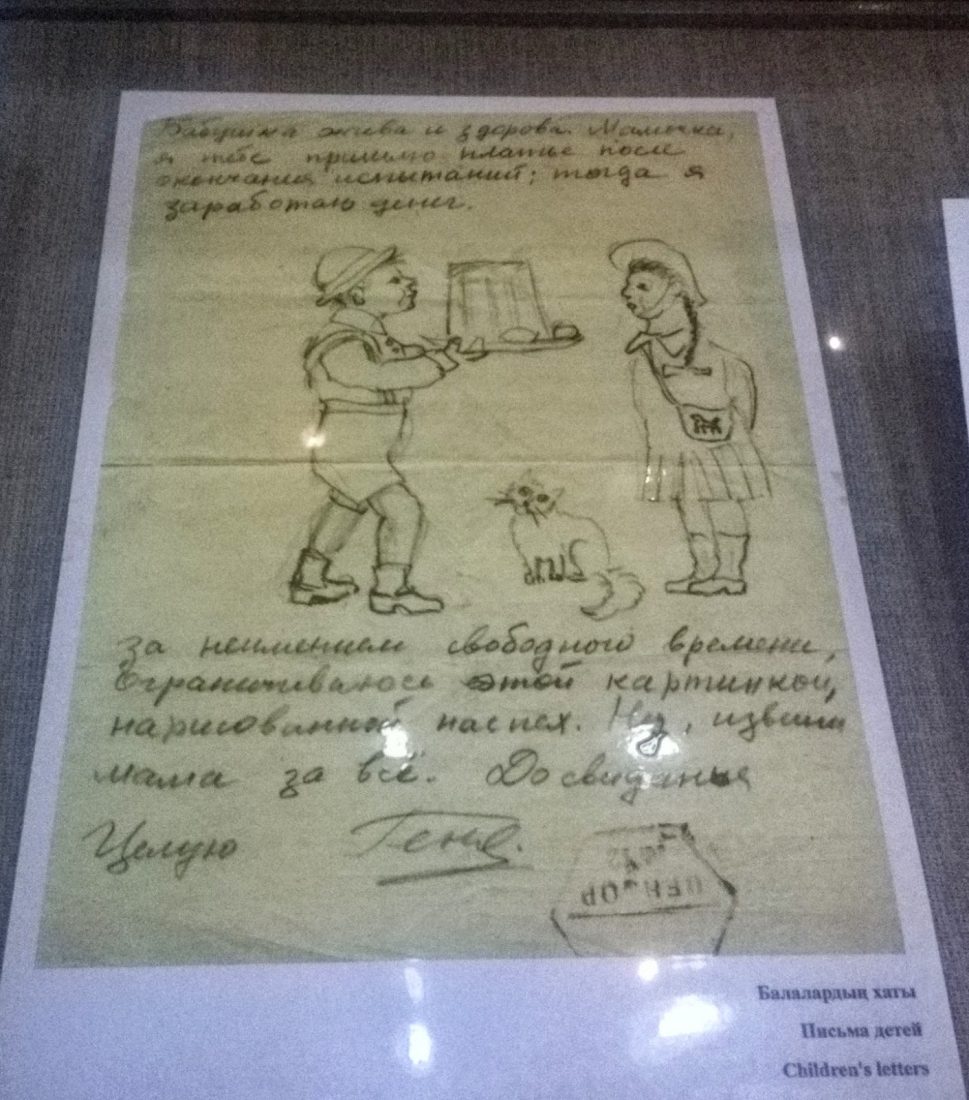 A child’s letter to its mother

The most heart-breaking display shows letters that the women received from their children and the small items they in turn made for them from scraps and managed to get sent to them. It is impossible to see these without choking with emotion – children’s letters and drawings reassuring their mothers that they were thinking of them, working hard at school, looking forward to their return. One prisoner made a little story book, illustrated by herself.

Several factors helped to make the life of the women more bearable.  The commandant was, by most accounts, if not a gentle man then not a sadist.  The camp was located close to a Kazakh village and the villagers did all they could to help the women – giving them extra food to supplement their meagre camp rations.  The first time this happened the women thought the villagers were throwing stones at them – closer inspection showed the “stones” to be kurt – small hard balls of traditional dried cheese.  Helping prisoners in this way was itself a crime that could result in similar incarceration. Despite this however a combination of inadequate food and clothing, cold and overwork killed many. 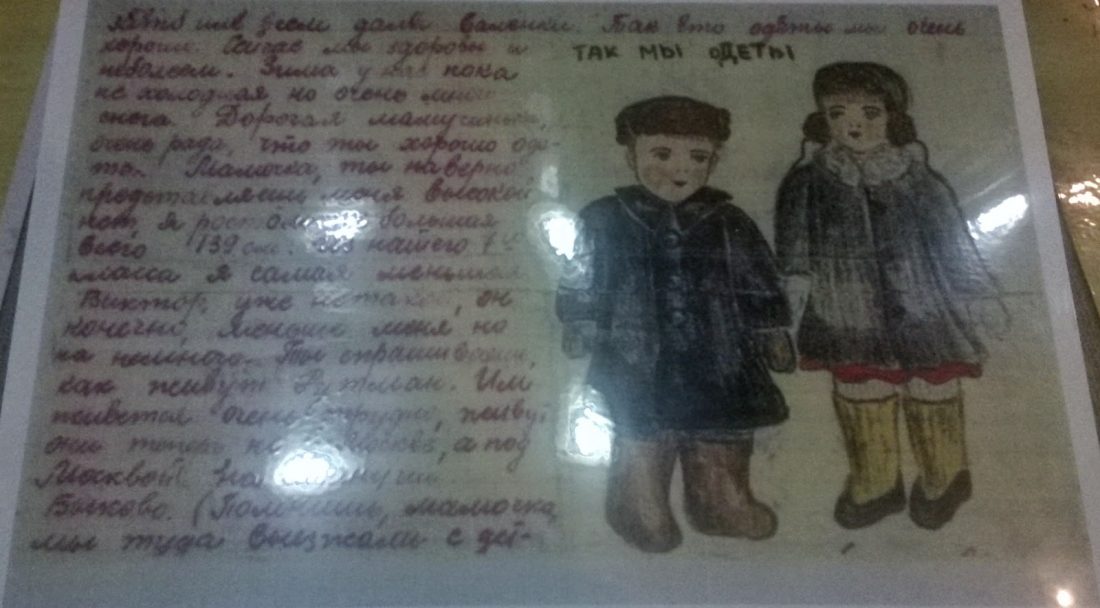 A letter to a prisoner from her son and daughter

The most terrible feature of the memorial is however the three black marble walls that bear the names of the victims. The number of names run to thousands, each a clearly identified individual – for the Gulag was nothing it not meticulous as regards its records. Each name represents a life ruined – not indeed only a single life, but the lives of so many other family members. The impression of evil having been let loose on earth and to its prevailing for a long period is very strong. 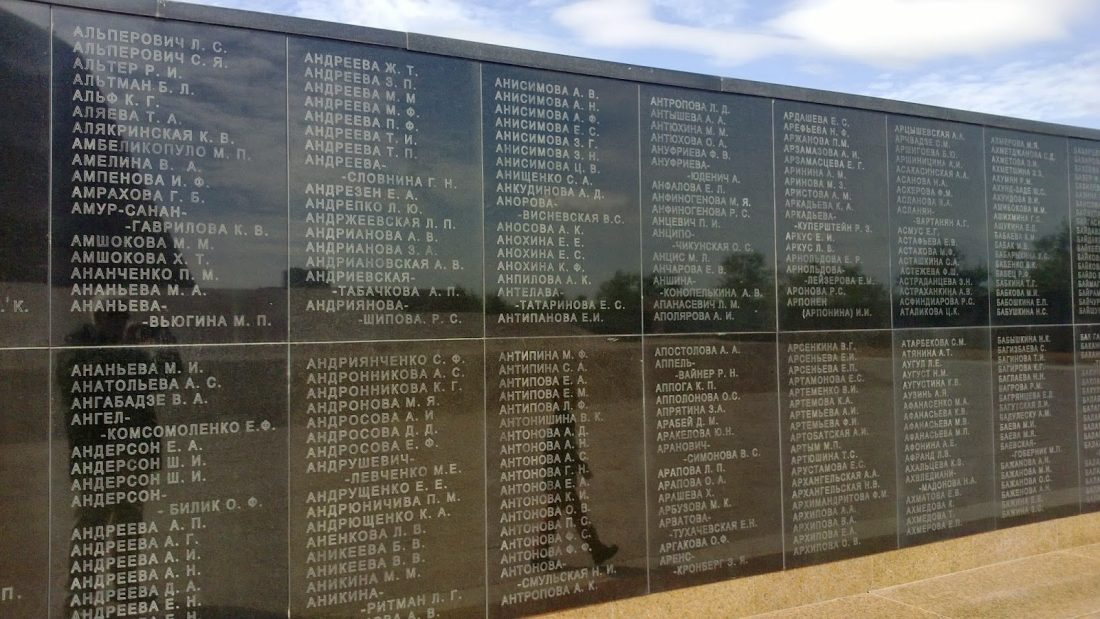 The camp was closed after Stalin’s death.  The memorial complex was opened in 2007 and as a newly-independent nation Kazakhstan has worked hard to acknowledge what happened on its soil in the name of the Soviet Union and to keep the memory alive so that it cannot happen again.  May 31st each year is dedicated to the memory of the victims of political repression. 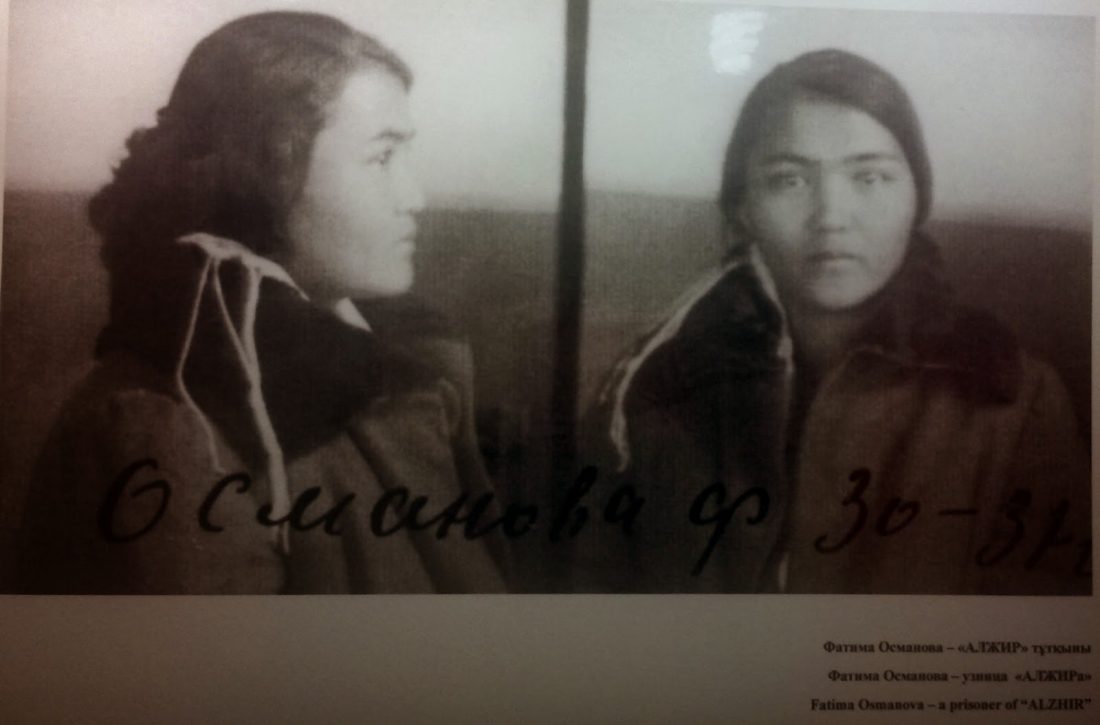 This lady – first name Fatima – seems to have been a Kazakh. I hope she survived

At the memorial I experienced the same emotions as when I visited the yet more dreadful site of Auschwitz some years ago. I felt extreme sadness, but also limitless reassurance that, no matter what oppression can be inflicted by the forces of evil, all that is good and admirable in humanity will somehow survive. I brought away with me three lessons that should never be forgotten;

A child’s letter to her mother – no photograph, just her self-portrait 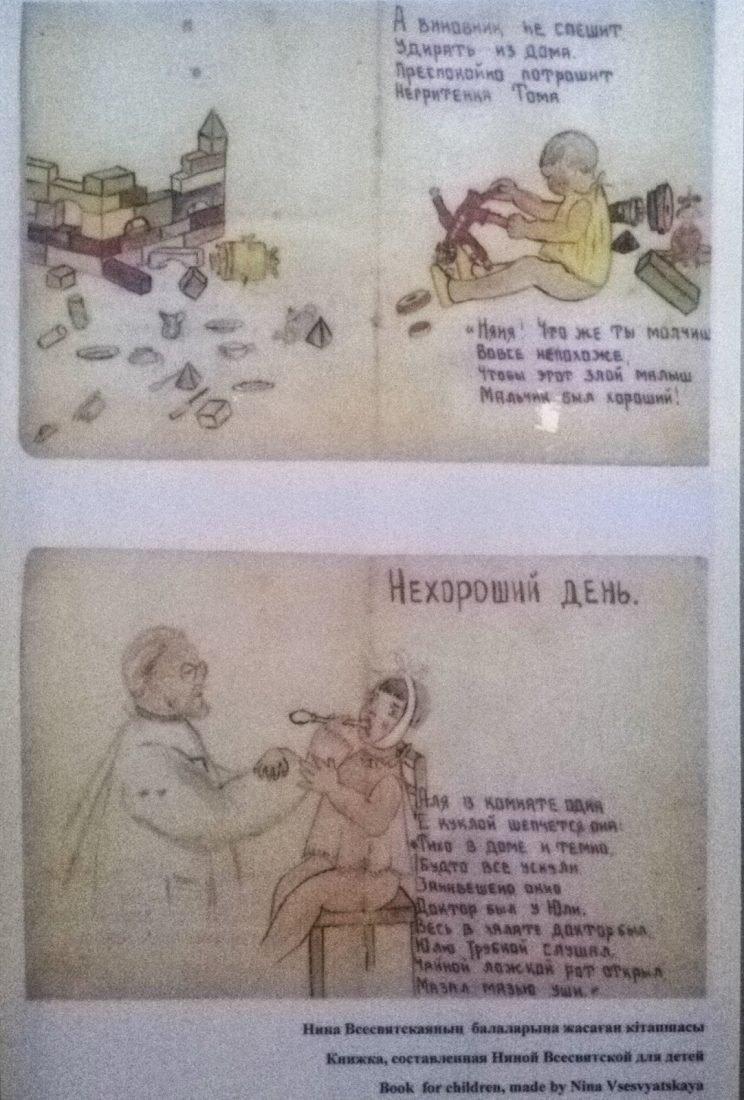 A book made by a prisoner for her children 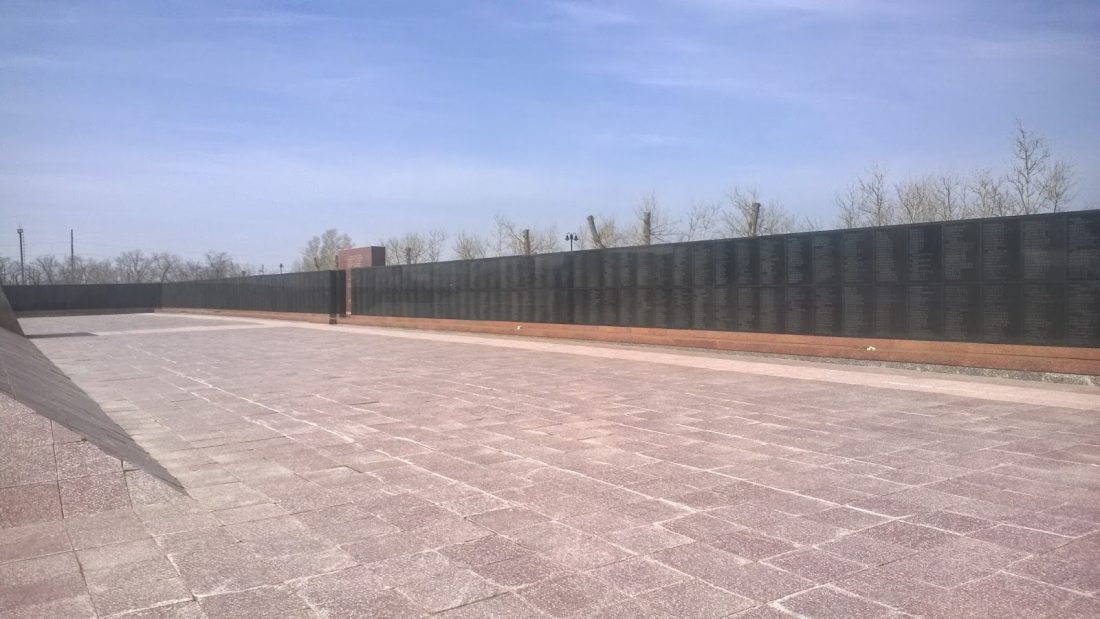 The three walls of names – thousands of them – are unforgettable

P.S. Many thanks to the very knowledgeable and fluent-Russian speaking “Ersatz Expat” of Astana who accompanied me on these visits to the Alzhir memorial.