Skip to content
Three Sisters vs. a French Privateer, 1811

Throughout the Age of Fighting Sail merchant shipping – from small coastal craft to large vessels engaged in interoceanic trade – were at the mercy of privateers. These were privately owned vessels issued with “letters of marque” that authorised them to attack and capture enemy shipping. If captured they would be treated as prisoners of war but their payment was dependent on the value of prizes they captured. This financial incentive meant that privateers – of which the French and American were the most active and successful – were of necessity daring and ruthless. Since Britain had the largest merchant fleet in the world it was to the most tempting target, especially as, in the days before radio, there was no ability to transmit a distress call, even when friendly vessels might have been in the vicinity. Though convoys, escorted by Royal Navy vessels, played an important role from the mid-eighteenth century onwards, Britain’s global commitments meant that available naval assets were always stretched. As a consequence, many merchantmen sailed independently and were reliant on their own ability – and willingness – to defend themselves. One such vessel was the Three Sisters, which fought off a heavily armed French privateer in 1811. 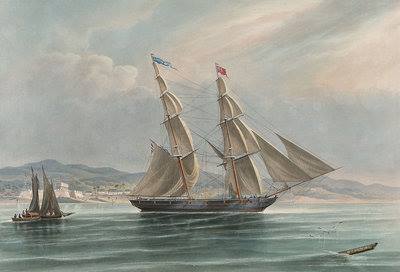 I came across the story of the Three Sisters in a book entitled “Privateers and Privateering” by a Commander Edward Phillips Statham, R.N. and published in 1910. Rather than describe the action himself, Stataham very wisely decided to copy, in toto, the short report made by the captain of the Three Sisters, George Thompson, to the vessel’s owners on September 18th, 1811. I am repeating it myself below as I regard it as a small masterpiece of succinct and descriptive prose which, in an understated way, conveys the bloody-minded determination of Thompson and his crew to see off any attacker.

Thompson’s report does not specify the type of vessel that the Three Sisters was – no need to, as the owners already knew! I am therefore indebted to Mr. Ark Hodge, who contacted my immediately after this article appeared, for further information. He advised that, according to the Lloyds Register for 1811, the Three Sisters was owned by St Barbe & Co. and trading between London and Corfu. She was described as a British-built brig of 137 tons and twelve feet in draught, plank-sheathed, furnished with a berth-deck, and armed with four guns. The French privateer was possibly larger, judging by the heavy armament she carried. It is notable that the action took place in British coastal waters and that the French privateer involved was prepared to operate there. One is reminded of small German U-Boats in action along England’s southern coast in World War One.

A Royal Navy armed schooner – the French privateer that the Three Sisters encountered might have been similar . Painting by Thomas Butterworth (1768-1842)

“I have to acquaint you with a desperate engagement I have had with a French privateer, Le Fevre, mounting 10 guns—six long sixes, and four 12-pound carronades—with swivels and small arms, manned with 58 men, out from Brest fourteen days, in which time she captured the Friends schooner, from Lisbon, belonging to Plymouth, and a large sloop from Scilly, with codfish and sundries, for Falmouth. On the 11th, at nine p.m., we observed her on the larboard bow; we were then steering N.N.E. about ten leagues from Scilly, and nearly calm.

“I immediately set my royals, fore steering-sails, and made all clear for action. At two a.m., when all my endeavours to escape were useless, she being within musket-shot, I addressed my crew, and represented the hardships they would undergo as prisoners, and the honour and happiness of being with their wives and families. This had the desired effect, and I immediately ordered the action to commence, and endeavoured to keep a good offing; but which he prevented by running alongside, and immediately attempted to board, with a machine I never before observed, which was three long ladders, with points at the end, that served to grapple us to them. They made three desperate attempts, with about twelve men at each ladder, but were received with such a determination that they were all driven back with great slaughter, and formed a heap for the others to ascend with greater facility. 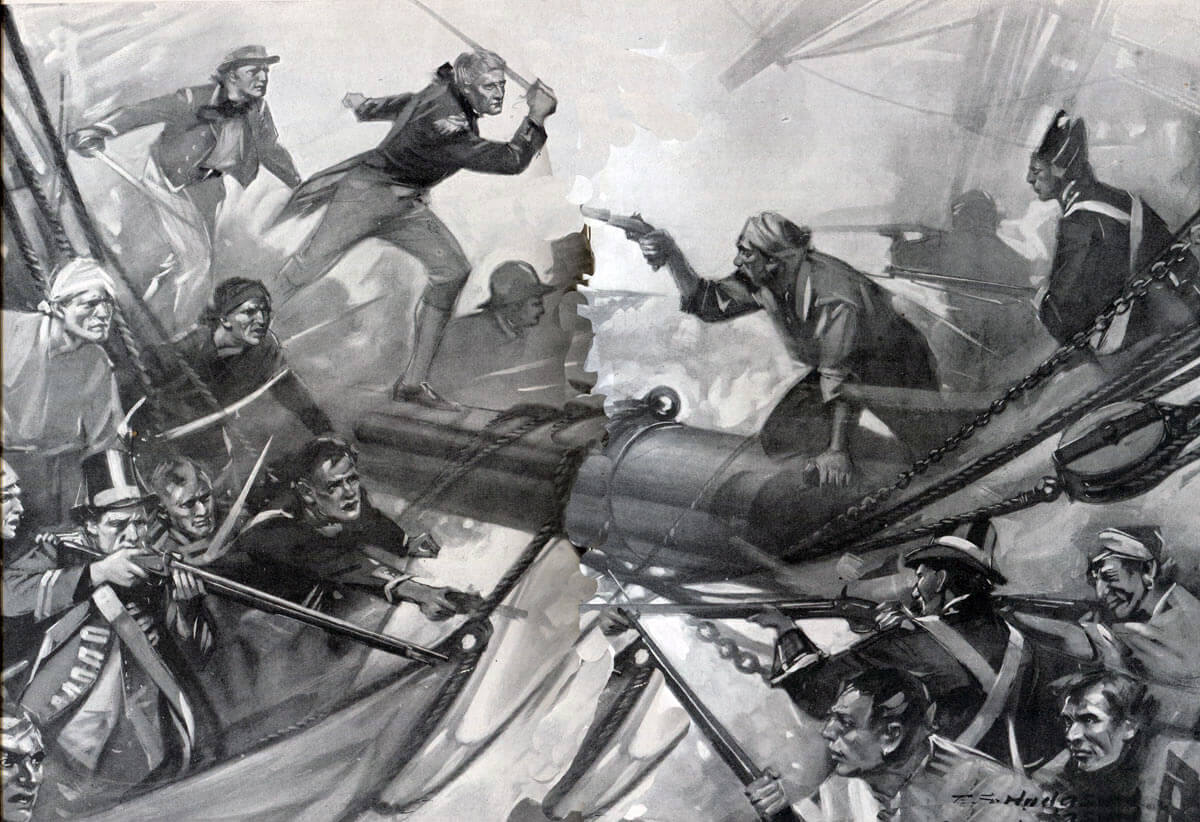 “Finding us so desperate, they immediately, on their last charge failing, knocked off their ladders, one of which they were unable to unhook from our side, and left it with me, and sheered off; but, I am sorry to say, without my being able to injure them, as they had shot away part of my rudder before they boarded me, and I am sorry to say wounded several of my masts and yards, for it seemed to be their aim to carry away some of my masts, but which, happily, they did not effect. The most painful part of my narrative is the loss of two men and a boy killed, and four wounded; but the wounded are doing well. Our whole crew amounted, officers and men, to twenty-six men and four boys, and deserve the highest applause that can be bestowed upon them. I arrived off here this afternoon, and, as it is fine weather, I have no doubt of reaching London in safety, as I have but little damage in my hull.”

One wonders what became of this magnificent man in later life – he deserved wealth, happiness and the thanks of his country. In the two world wars, other merchant captains were to be Thompson’s spiritual heirs. They showed the same qualities of courage and resolution in bringing their ships through even worse ordeals. Without them, the Battle of the Atlantic and other desperate campaigns could never have been won.