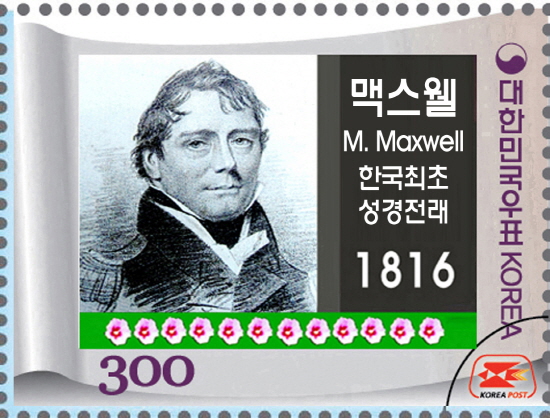 Maxwell had command of the frigate HMS Dædalus, a Venetian-built ship captured in the Adriatic in 1811, for a mere eleven months. In her he left Britain in January 1813, escorting an East India Company convoy to Ceylon (now Sri Lanka).  The voyage was uneventful and by sunset on 1st July the convoy had passed the island’s most southerly point. During the hours of darkness it sailed east by north to give any coastal shoals adequate clearance and on the following morning it headed north, parallel to the coast, towards its destination of Trincomalee.

This was a period when charts were less than adequate and when heavy reliance was placed on pilots familiar with coastal waters. No chances were being taken on the Daedalus – her course was some seven or eight miles off the land and good look-outs were being  kept both from the deck and mast-head for rocks and breakers. It was reported that “the atmosphere was so clear that a ripple might have been seen upon the water for miles around”. Nothing appeared to indicate danger and the master was pointing out to Captain Maxwell her position on the chart, when they felt the hull touch ground somewhere close to her stern. The shock was almost imperceptible and many on board were not aware of it. Signals were immediately made to warn the convoy of their danger, but before the signals could be answered, HMS Dædalus swung off into deep water. All sail was set, and hopes were entertained that she was not materially injured. Perhaps due to her Venetian construction, and originally designed for service in the relatively calm waters of the Mediterranean, HMS Dædalus  proved  too slight to sustain any shock without damage. Gentle as the grounding had been the lower part of the stern-post had given way, causing a massive leak. The pumps were instantly manned but it was impossible to keep pace with the ingress of water. 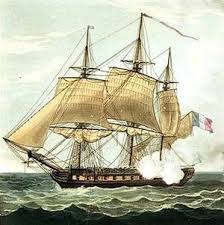 The French frigate Clorinde – HMS Daedalus would have been very similar

A signal was made for the convoy to stand by and to send all their carpenters on board Dædalus, but their combined efforts were to be unavailing. The rudder was detached from the broken part of the stern-post and guns and anchors were thrown overboard. A patch was fashioned from canvas, oakum and tar. It was dropped over the stern and pulled into position along the keel to block the leak. This was only briefly successful however and hopes that had been briefly raised that the ship might yet reach Trincomalee were dashed. After eight hours continuous pumping the exhausted crew saw the water rising to the level of the lower deck.

Captain Maxwell now recognised that he had no chance of saving his ship and that she must be abandoned as soon as possible if lives were to be saved.  The process was disciplined in the extreme. The boys, “idlers”, and two divisions of seamen and marines were ordered into the boats which were alongside, while the remaining men were employed at the pumps to keep the ship afloat. The good order and discipline which prevailed during this scene are beyond all praise. In Maxwell’s words “The men behaved as if they were moving from one ship to another in any of the King’s ports.’ 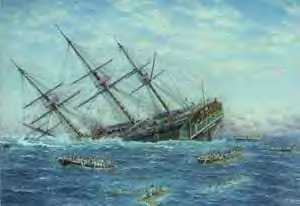 The sinking of HMS Pandora on August 30, 1791. She was carrying captured mutineers from HMS Bounty. The last moments of HMS Daedalus must have looked very similar

HMS Dædalus was settling fast, when the boats returned to carry away the remainder of the officers and men, they left the pumps and embarked in the boats, taking with them the hammocks and clothes belonging to the ship’s company. Maxwell was the last man to leave. Five minutes later the ship lurched, fell on her beam ends and lay on them for a minute, then righted again and slipped gently from sight. The presence of the other ships in the convoy ensured that there were no casualties.

In the court-martial that followed blame was laid on the master, Arthur Webster, for having failed to take constant depth soundings. He was severely reprimanded. To modern eyes it seems strange that it should be the master rather than the captain who would suffer but Maxwell’s reputation did not seem to be damaged and his career was not impeded. He was soon to be in command of HMS Alceste and three years later he was heading to China and the events for which he is best remembered.(Click here to read about these events in 1817)