Skip to content
WW1, a German View – the Last Years of Cavalry

WW1, a German View – the Last Years of Cavalry 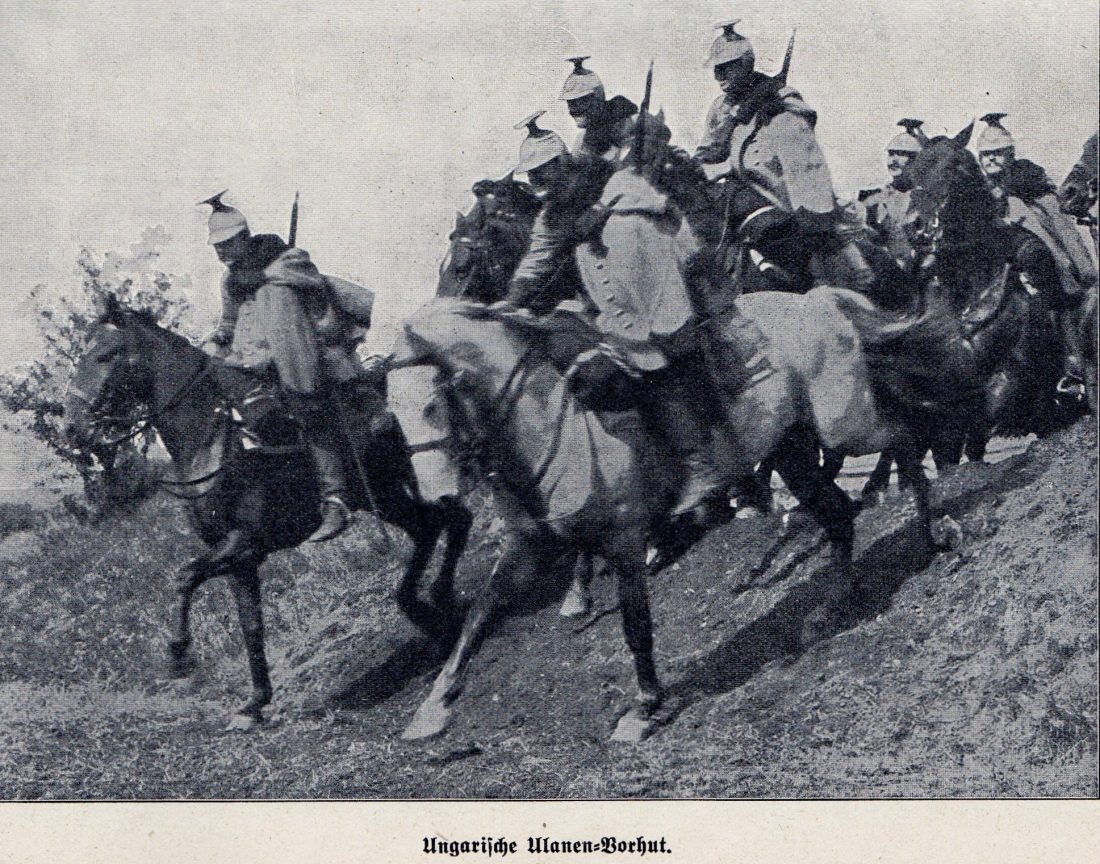 I’ve always been fascinated by how much the “feel” of the world of 1914 differed so dramatically from that of 1918. As one sees newsreels of 1914 – and in particular the computer-colourised versions one has seen recently, which gives an immediacy that black and white does not – one is struck by the absurd posturing of often-ludicrous figures in comic-opera uniforms. It is hard to believe that preposterous individuals such as Kaiser Wilhelm II, Emperor Franz-Josef or Czar Nicholas II – or indeed the pompous but short-sighted leaders of France and Great Britain – could ever have been in positions of power that allowed them to plunge the world into nightmare. 1918, a mere four years later, seems not only a time  of brutal, disillusioned realism which had swept away the last vestiges of the 19th Century, but also one in which an explosion of  technology had achieved changes which might otherwise might have taken decades. The World of 1914 “feels” different to ours of today, while that of 1918 was one which has myriad familiarities with our own. 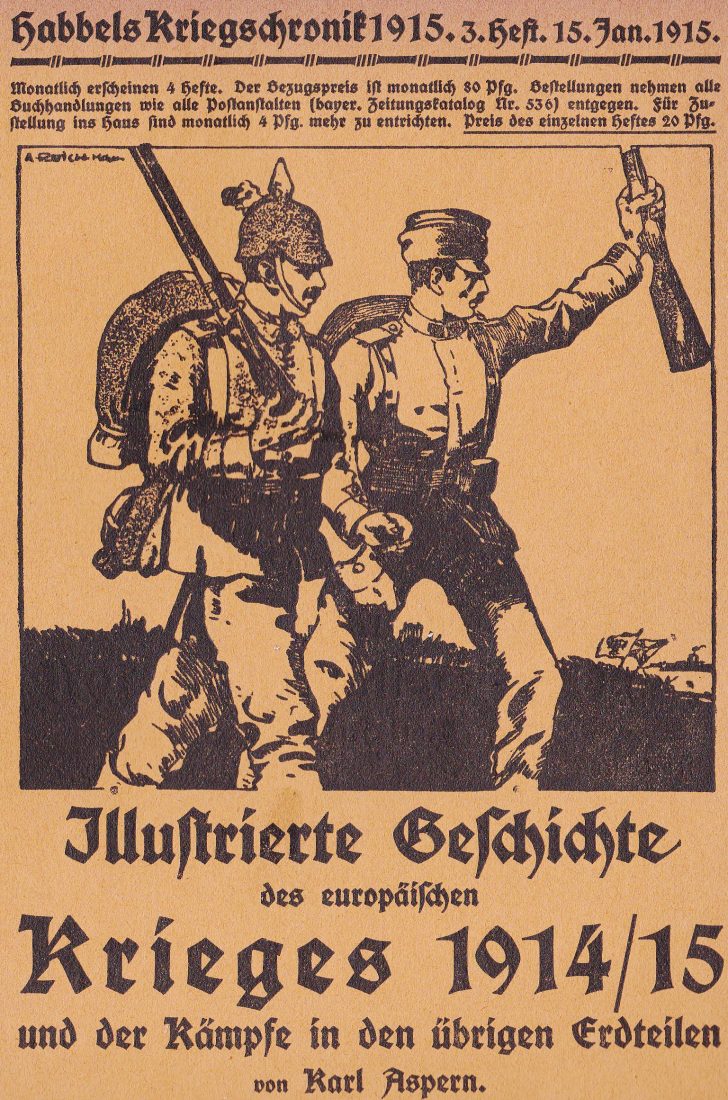 I was spurred to these reflections when I recently came across 1914/15 copies of a German illustrated magazine, detailing the progress of the war. Published in regular parts by a Bavarian publisher, Josef Habbel of Regensburg, Bavaria, the magazine was a German counterpart of several similar British month-by-month histories of the war, bound copies of which can sometimes be found in British second-hand bookshops. This “Illustrated History of the European War 1914/15” was   edited by one Karl Aspern, about whom I have been unable so far to find out more than that he appears to have written histories of Turkey and Bulgaria in the same period. This magazine is particularly interesting in that it shows a German view of the early stages of the war when stalemate may have been developing on the Western Front, but when largely mobile warfare was the norm on the Eastern Front.  The overall tone of the publication is crudely propagandist, and one suspects that the artists who provided the illustrations (there are fewer photographs than one would have expected) had never actually visited the front and were providing a idealised rather than realistic pictures. This said, it nevertheless offers interesting insights as to how Germans on the Home Front viewed – or were allowed to view – the war. 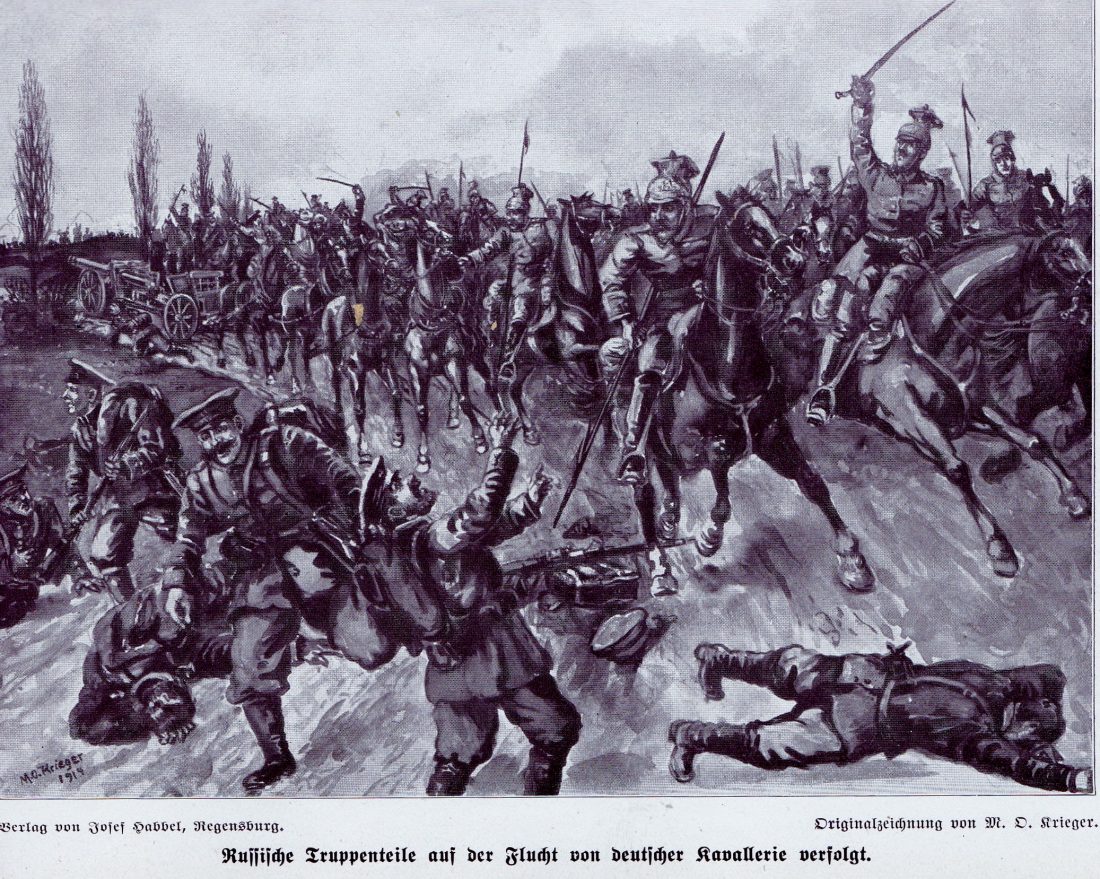 A notable aspect is the prominence given to cavalry operations. On the Western Front these were largely limited to the first weeks of the war, and were mainly restricted to a reconnaissance role, but cavalry  was to remain significant factor throughout on the Eastern Front – and on into the Russian Civil War and the Soviet-Polish War of 1920. Here they played a more traditional cavalry role, taking advantage of their superior mobility to exploit breakthroughs, acting as mounted infantry (as was the original role of Dragoons) and on some occasions acting in a shock role, such as harrying  retreating troops. 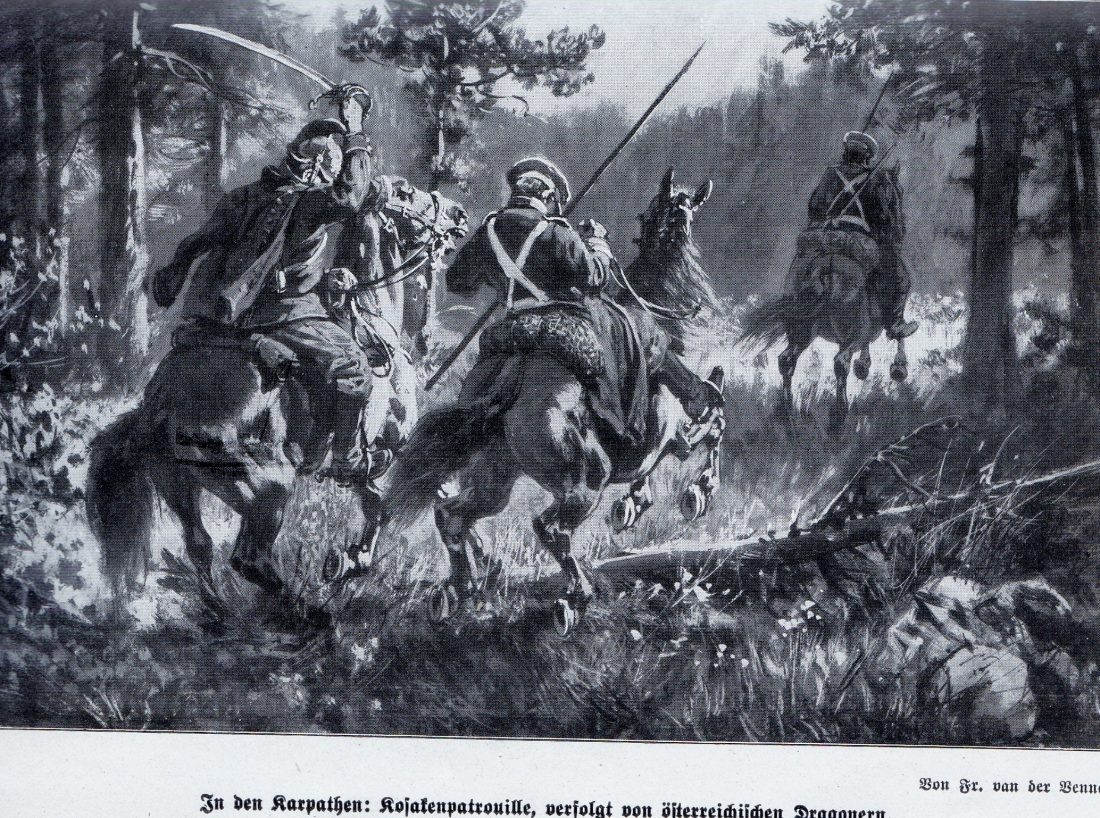 Austro-Hungarian cavalry driving off Cossacks in the Carpathians.
It could be a scene from “War and Peace” but Blitzkrieg is only a quarter-century away

Looking at the illustrations below – all from late 1914 and early 1915 – one gets the impression of looking at the death of “The Long 19th Century”. 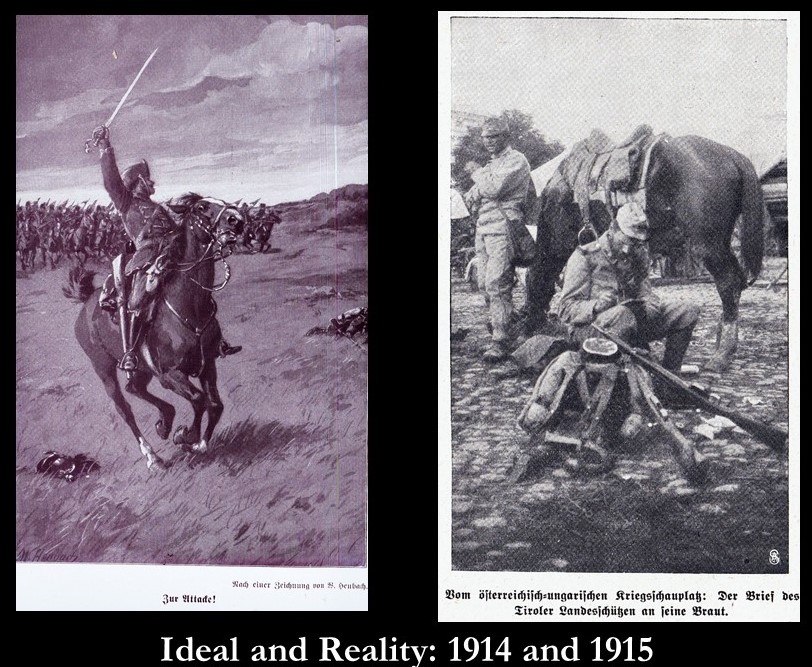 I hope you’ll find these images of interest. It is striking that in the illustrations shown below the focus is on offensive roles, and given the antiquated uniforms still in use many could easily be taken as referring to the Napoleonic or 1870 period. There is no hint of recognition here of the potential of mechanisation, yet by the end of the war – four years later – massed attacks by tanks, a new weapon, would be crucial in breaking the German lines on the Western Front.  It’s hard to believe that only a quarter-century separated this last gasp of gorgeously uniformed horse cavalry from the Blitkrieg era.  Even more remarkable is the thought that many young men who served in the units depicted in the illustrations below were themselves to lead German and Russian tank forces in Spain, in Mongolia and on the Eastern Front. 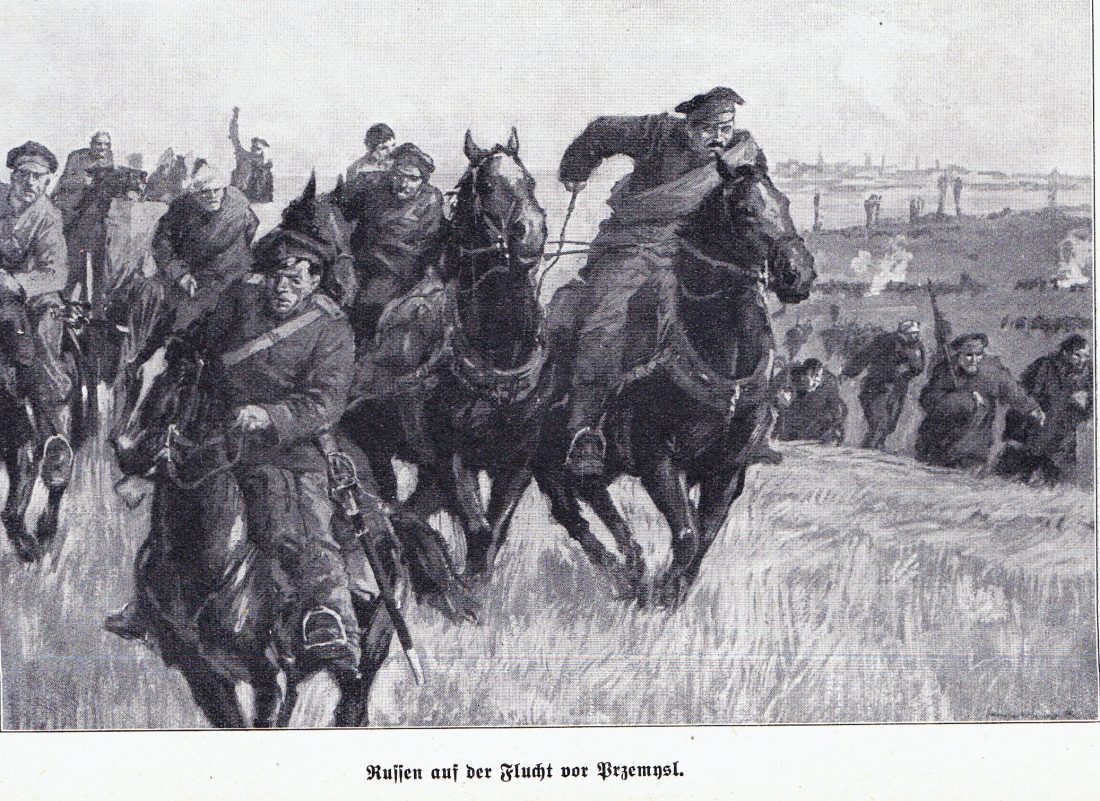 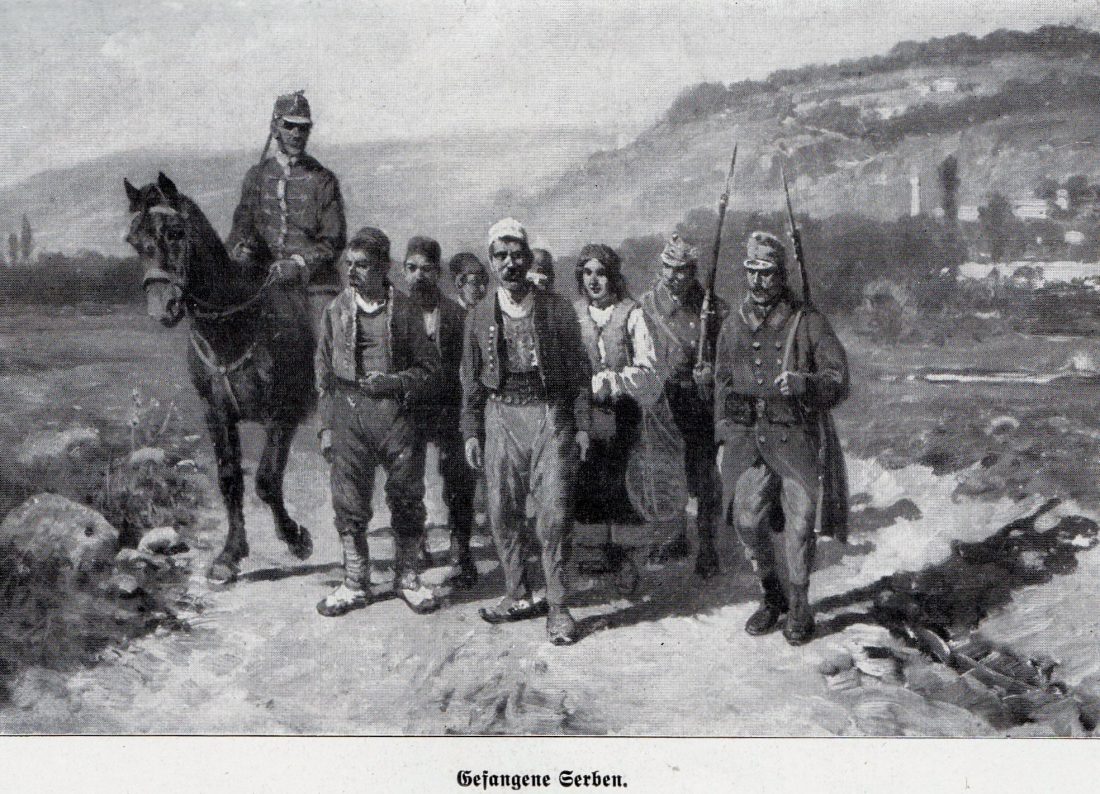 Serbian prisoners of the Austro-Hungarians – their dress is almost medieval 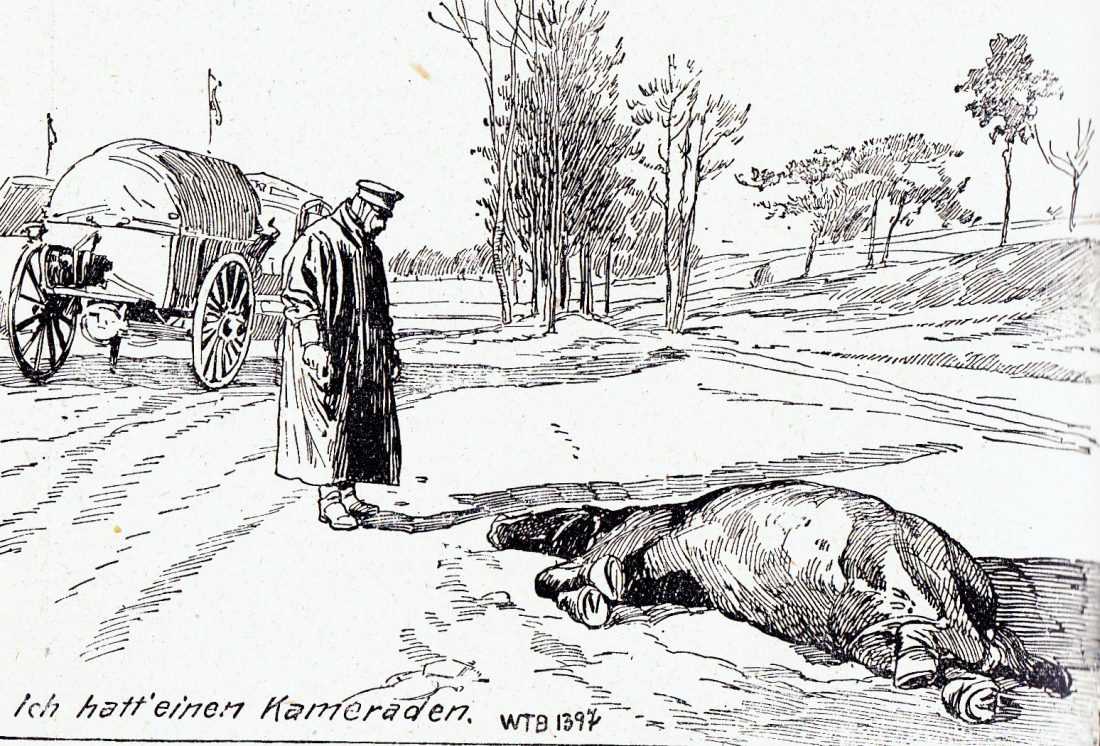 And the last drawing is the most poignant. The caption reads “Ich hatte eine Kameraden” (“I had a Comrade”) and refers to the very moving song still sung by German troops at the funerals of the fallen, including most recently men lost in Afghanistan, where modern Germans stood shoulder-to-shoulder with one-time enemies.