Though mention warfare in the Age of Fighting Sail so often conjures up images of major fleet actions such as Camperdown, The Nile, and Trafalgar, single-ship actions between small vessels represented the vast majority of combats at sea. One of the most remarkable of these – stranger than fiction indeed – occurred in the Indian Ocean, off Madagascar in 1806. It did not involve ships of the official British and French navies but rather two privateers – privately owned vessels which had been issued “letters of marque” by their governments and thereby authorised to wage war on their behalf. The profit motive was powerful in such cases and where possible the objective was to capture enemy commerce rather than to risk combat. 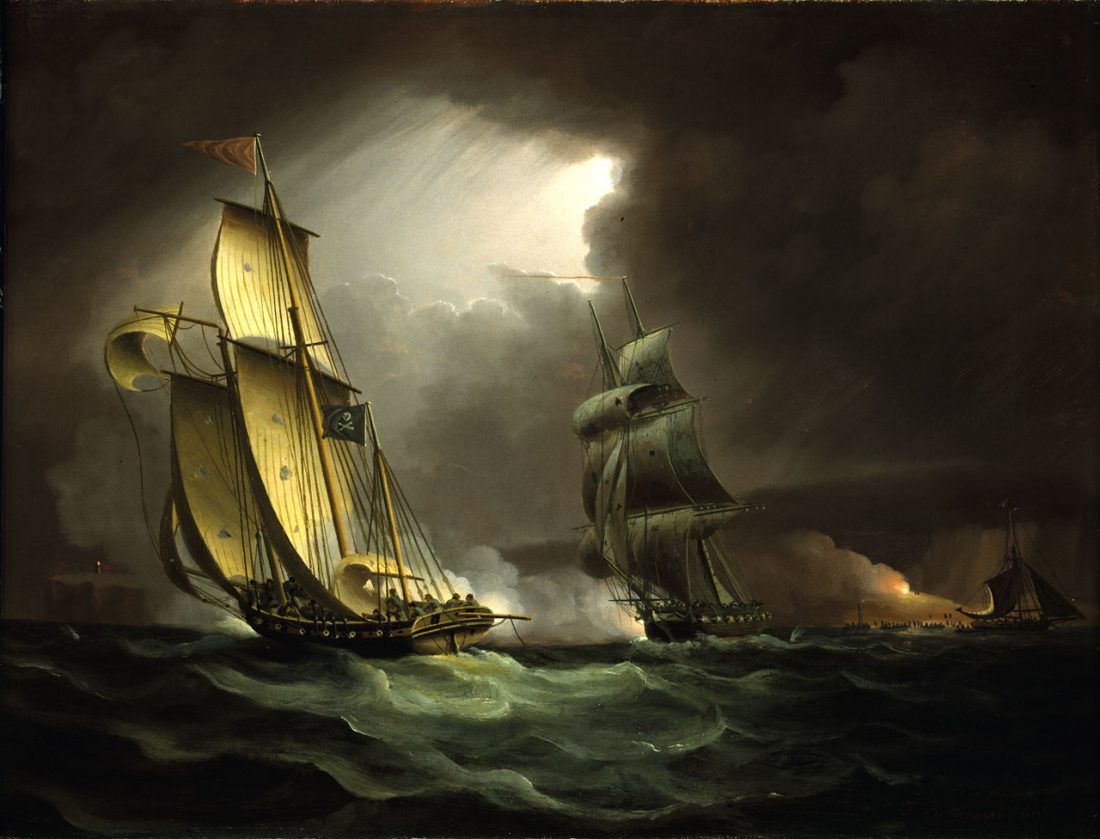 A John Myers was serving as first lieutenant on the privateer Tamar in September 1806. (His identity was uncertain – see note at end as regards his possible subsequent career). Close to Madagascar this vessel captured a small French privateer, the Bon Fortune, which was operating out of the French island stronghold, the Isle de France, now known as Mauritius. The crew was removed to the Tamar and Myers took over the Bon Fortune with a prize crew of fourteen men. The two vessels separated in the night but the following morning Myers saw a strange sail approaching at speed and her general appearance indicated that she was La Brave, a large privateer carrying 16 guns and 130 men, which had been operating in the area with considerable success.

Myers recognised that he had no hope of escaping this enemy vessel or of defeating her in straight combat but he settled on a stratagem that was as audacious as it was dangerous. La Brave had a reputation for capturing her prizes by boarding with almost her entire crew, a manoeuvre that avoided damage and potential loss of valuable cargos. Myers accordingly brought the Bon Fortune’s two portside guns across to supplement the two on the starboard side, on which La Brave was approaching. He had them all loaded and then the remaining gunpowder was then dumped overboard. His vessel carried one boat only and this he had lowered from the stern, filled with small-arms and secured close to the cabin’s portside port. He then briefed his crew on what he wanted of them and waited. As La Brave closed to “within pistol shot” the Bon Fortune opened fire and received a broadside in return. The French ship then crashed into her, her bowsprit lodging in the Bon Fortune’s rigging. Briefly locked together, La Brave repeated the manoeuvre for which she was known – the greater part of her crew, all but four men, swarming across to take the prize. They met no opposition. Myers and his crew had retreated to the stern cabin and had locked themselves in. The French placed guards on the door to prevent a sally. 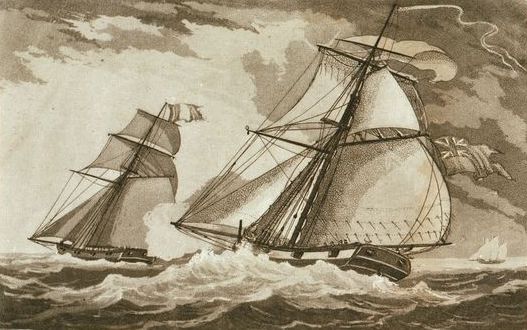 No illustrations seem to exist of the Bon-Fortune vs. La Brave action but it might have looked like this:  HMS Nimble captures French privateers Bonheur and L’Impromptu 1797

The ships had by now drifted apart and Myers and his crew piled out of the cabin and into the boat secured alongside. They cut the rope that secured it and rowed frantically away towards La Brave. As they boarded her the four Frenchmen left on board ran to opposed them. Two were killed and the other two secured. Myers’ men now had control of La Brave and he brought her around under the stern of the vessel he had just vacated, bringing all guns to bear on it. Under threat of raking by the ship he had just lost, La Brave’s captain surrendered on promise of his crew’s treatment as prisoners of war.

Now with both La Brave and the Bon Fortune under his command, Myers set out to search for his parent ship, the Tamar. He found her three days later but the appearance of La Brave in the Bon Fortune’s company raised fears that both ships were under French control. The Tamar made every preparation to open fire and Myers lowered his topsails in sign of capitulation and sent his men below decks to minimise the risk of casualties. Disaster was thus avoided.

Myers continued in command of La Brave for several months until she in turn was captured by the French frigate Tamise. He was received honourable treatment as a prisoner at Port Louis, on the Isle de France.

Note: When I posted this article on my previous blogsite almost four years ago, I posed the question “It would be interesting to know what became of him subsequently. Would any of this blog’s readers know?

A reply from a reader, Mr. Dirk Puehl, was very interesting:

“Unfortunately, there are quite a lot of Cpt. John Myers out there, one serving with Brother Jonathan’s artillery in Virginia in 1812, others around the turn of the century, likewise, and one obviously celebrated a sort of Christmas Truce during the Battle of the Bulge back in ’44.

However, there seems to be a book called “The Life, Voyages, and Travels of Captain John Myers”, published in 1817 and one served with Cochrane in the Brazilian Navy during the 1820s in the good ship “Meridian” (cf: https://goo.gl/wlQjXo ) – I’m quite sure there are more wonderful tales to be told about him!”

This raises fascinating possibilities and I’m grateful to Mr.Puehl for raising them. Does anybody else know more?