If you missed the first part of this article, please click here to read it.

HMS Glasgow entered the Chilean port of Coronel to collect messages and news from the British consul. She found there a German supply ship which promptly radioed news of Glasgow’s arrival to von Spee. In line with the laws of neutrality HMS Glasgow could take no action in port against this vessel. On receipt of the news von Spee headed south to find the British cruiser. Alerted by German radio-traffic (the importance of radio silence does not appear to have been yet appreciated) Cradock turned north with his squadron to meet the Germans, leaving the pre-dreadnought HMS Canopus far behind and HMS Glasgow steaming south to join him. 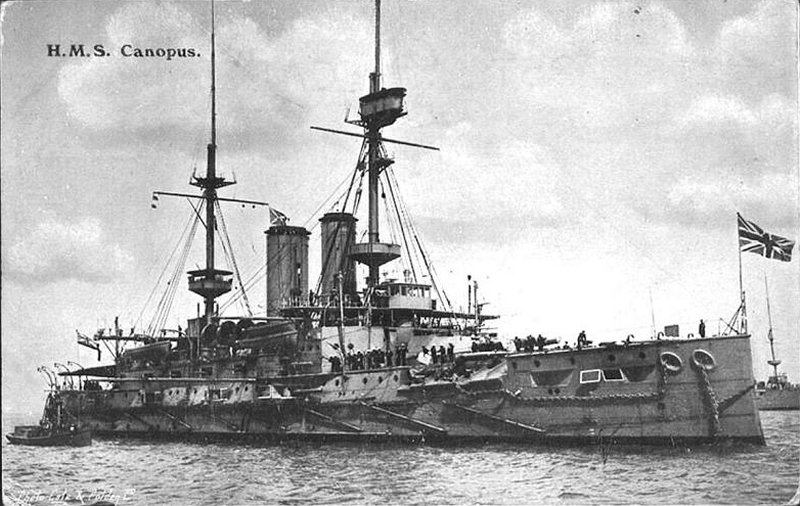 HMS Canopus – heavily armed but too slow to support Cracock

The British and German squadrons were now on a collision course and, given the disparity in strength, Cradock’s decision to advance seems almost inexplicable, the more so since he would lack HMS Canopus’s support. It was said later that he was “constitutionally incapable of refusing action”. Another explanation is that, knowing his mission was impossible, Cradock wanted to damage von Spee’s ships and to force him to use ammunition he could not replace.

HMS Glasgow joined HMS Good Hope, HMS Monmouth and HMS Otranto early on November 1st, in seas too rough to allow inter-ship transfer, messages being sent across by line instead. In early afternoon Cradock deployed his ships in line of battle and at 1617 hrs the German squadron sighted British smoke. Von Spee took Scharnhorst, Gneisenau and Leipzig ahead, leaving the slower Dresden and Nürnberg to follow.

Confronted by this overwhelming force, Cradock ordered a turn away so that both squadrons rushed south in a chase that was to last 90 minutes. The slow, 16 knot, Otranto was now Cradock’s millstone and he knew that he must choose between abandoning her and continuing to run south with Good Hope, Monmouth and Glasgow or to stand and fight to protect the useless converted liner. Cradock decided he must fight, and he accordingly drew his ships closer together, turning to the south-east to close with the German vessels while the sun was still high. Von Spee, meanwhile, was manoeuvring his force to ensure that the British ships to the west would be outlined against the setting sun. 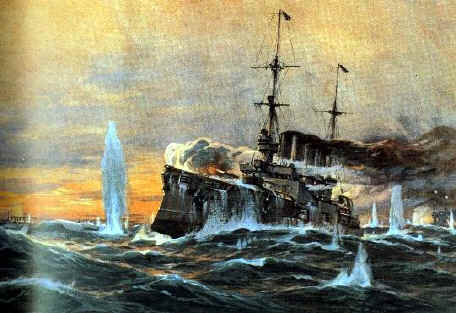 Von Spee responded to Cradock’s manoeuvre by turning his own faster ships away, maintaining the distance between the forces at 14,000 yards as they steamed in parallel.  Cradock now ordered the Otranto, which was too weakly armed to influence the outcome, to escape west at full speed. At 1818 hrs, with little daylight left, Cradock again tried to close, but von Spee once more turned away to open the range. The sun set at 1850 hrs and the British ships were now silhouetted against the last light in the west.

Von Spee closed the range to 12,000 yards and opened fire.

What followed was a massacre. The British 6-in weapons were outranged by the German 8.2’s and, when Cradock made another attempt to close, the German fire became even more devastatingly accurate. By 1930 hrs both Good Hope and Monmouth were on fire, easy targets for the German gunners now that darkness had fallen, whereas the German ships were shrouded in darkness. Monmouth’s guns fell silent but Good Hope continued firing until 1950 hrs when she too ceased fire, then exploded and disappeared. Scharnhorst maintained a merciless fire on Monmouth, while Gneisenau joined Leipzig and Dresden in engaging Glasgow. HMS Glasgow was still relatively undamaged but her captain turned away to escape in the darkness, recognising that continuing the battle would be futile. 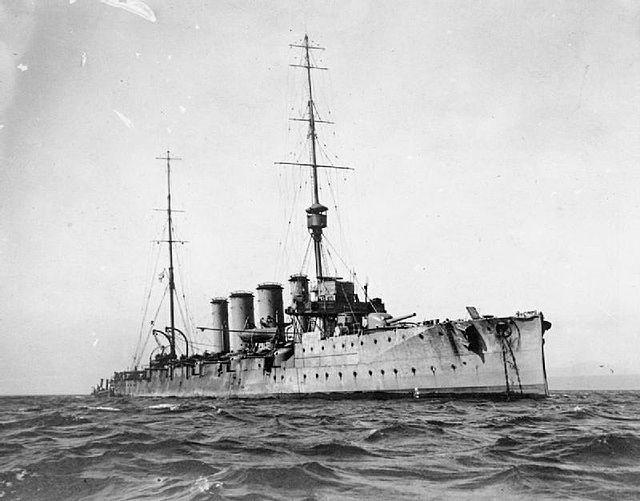 HMS Monmouth, badly damaged, but still afloat, tried to run eastwards to beach herself on the Chilean coast. The Germans lost her temporarily in the darkness but the Nürnberg, the slowest of von Spee’s ships, found her. The German captain directed his searchlights on to Monmouth’s ensign in an invitation to surrender but she refused to do so. Nürnberg then opened fire reluctantly and sank her. Aware that Canopus might be somewhere in the vicinity von Spee turned north and the action ended. 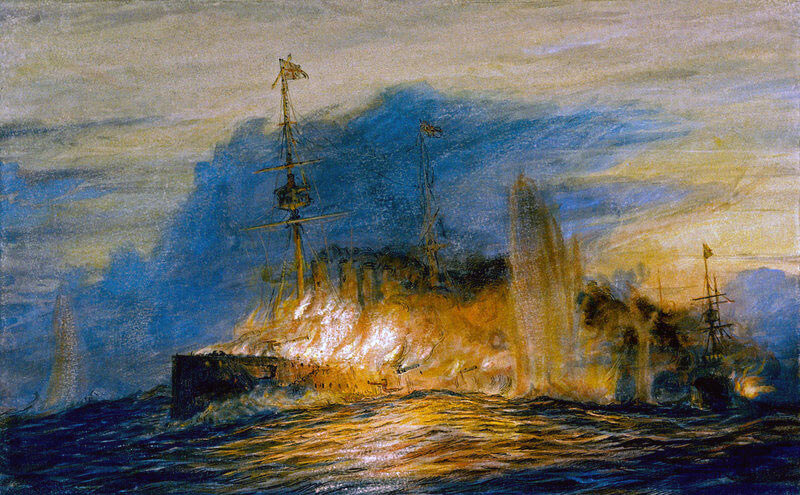 All sea battles are horrible but Coronel seems particularly ghastly. The rough seas, the all but impotent British armoured cruisers being pounded with salvo after salvo, the darkness, the raging fires, Good Hope’s explosive end, the hope raised on Monmouth that she might yet survive, only to have it dashed, all combine to give the encounter a nightmare quality. There were no survivors from either Good Hope or Monmouth, 1,600 British officers and men, including Cradock, having been killed.  Glasgow and Otranto both escaped, neither with fatalities. Two British shells, both duds, hit Scharnhorst, and four shells struck Gneisenau. Three German seamen were wounded. The greatest loss to von Spee was the expenditure of ammunition which could not be replaced. When his ships next faced British forces, as they would a month later at the Falklands, the German squadron would do so with depleted magazines. 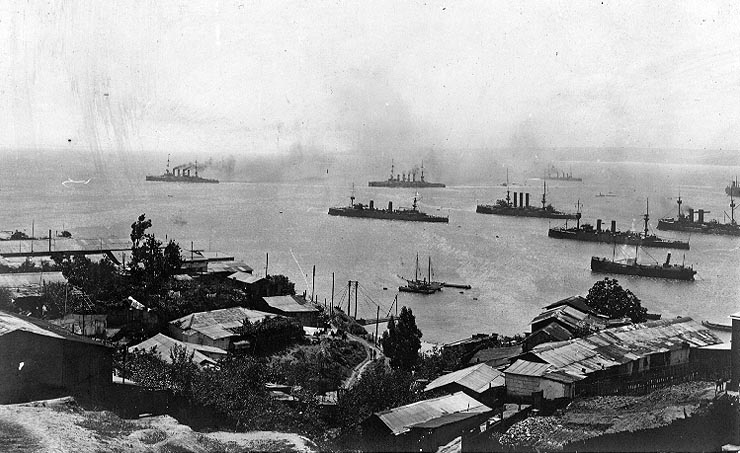 Von Spee was aware that his victory would not be enough to save his squadron, far from home as it was and without German bases between. When, two days later, his squadron entered Valparaiso to the cheers of the German residents, he refused to join in the celebrations. Presented with a bouquet of flowers, he remarked “These will do nicely for my grave”.

The defeat at Coronel, the first surface action in over a century which the Royal Navy had lost, was both shocking and unexpected. Only by swift and total annihilation of von Spee’s squadron could the humiliation be avenged. Massive forces were sent south from Britain to ensure this – as they did a month later.

But that’s a different story!

The eighth Dawlish Chronicle is published in paperback and Kindle, and is available to subscribers to Kindle Unlimited and Prime at no extra charge. It can be read in sequence or as a standalone.