In 1864, two significant conflicts raged: the “Danish War”, in which Denmark resisted the combined forces of Prussia and Austria, and the Civil War that raged not only in North America but on the world’s oceans. A key feature was the construction of Confederate raiders in European shipyards, an effort masterminded by James Dunwoodie Bulloch, the Confederate agent described by the US State Department as “the most dangerous man in Europe” – and also the uncle of the future President, Theodore Roosevelt. These themes come together in my latest novel, Britannia’s Innocent (details at end of article), and it’s therefore a good time to tell about one of the most spectacular of the vessels ordered by Bulloch – the ironclad ram, CSS Stonewall. 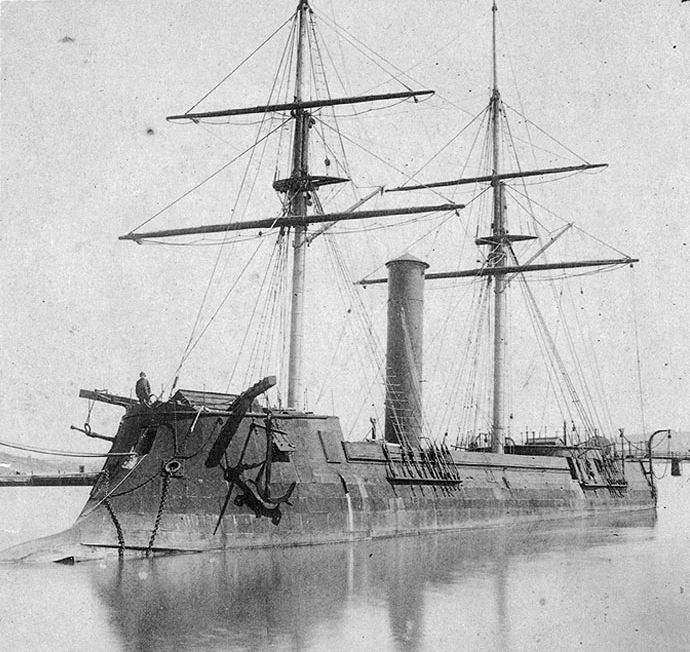 When thinking of the ocean-going navy of the Southern Confederacy in the American Civil War the image immediately comes to mind of fast, largely unarmoured vessels such as the Alabama and the Florida, general similar in construction terms to commercial vessels, albeit strengthened to carry heavy armament. The corresponding image of a Confederate ironclad is, by contrast, an armoured, improvised, steam-propelled raft intended for service in rivers and coastal waters. It is therefore somewhat of a surprise to learn that the Confederacy’s last “Blue-Water” naval vessel was a heavily-armed ironclad, well capable of sinking any major Union warship she encountered. Completed late in the conflict, only the end of the Civil War brought her potentially devastating career in Confederate service to an end just as it was starting. This was however to be just the prelude to spectacular battle-service in a newly created navy on the other side of the world.

The ship that was to become the CSS Stonewall was one of two ironclads constructed in France, personal approval for the project being given in 1863 by the Emperor Napoleon III, who was sympathetic to the Confederate cause. The objection that French neutrality would be compromised by delivery of warships to either the Union or to the Confederacy was neatly side-stepped by circulation of the rumour that they were intended for delivery to the Khedive of Egypt – the appropriate names of Sphynx and Cheops were allocated to them. A further element of confusion was added by ensuring that the armament would come from Britain. The seagoing ironclad concept was a new and revolutionary one at the time – France’s Gloire and Britain’s HMS Warrior, the first of the type, had been launched in 1859 and 1860 respectively – so the Confederacy was betting on acquiring cutting-edge naval technology. 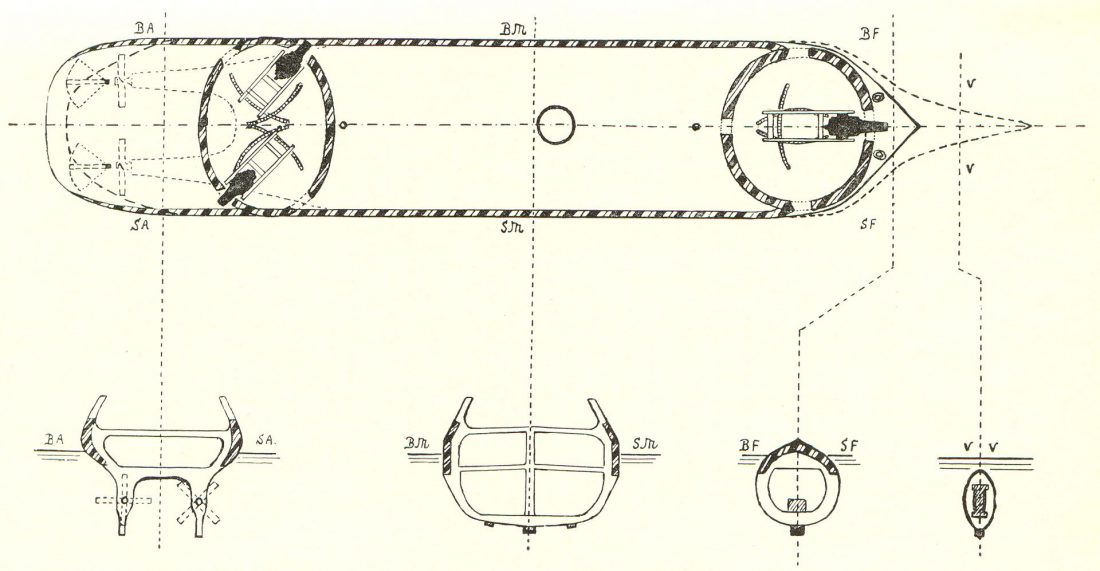 Sphynx and Cheops were of 1358 tons and some 190 feet long. Their 1200-hp steam engines, driving two screws, gave a top speed of over 10-knots. Twin rudders made for very tight turning circles – a decided advantage at a time when combat was likely to be at very close range. They also carried an auxiliary sail rig – especially valuable for conservation of coal when operating over long distances. The most notable feature was however the heavy armour protection – a waterline belt with thickness ranging from 3.5 to 5-inches of iron, as well as some 5-inches on the redoubts fore and aft in which the armament was housed. These latter structures were not rotating turrets, but rather protective casemates from which the guns fired through ports. As such they could be regarded as precursors of the later “central battery” type of ironclads, as compared with the traditional broadside arrangement of the earlier Gloire and Warrior.  Sphynx and Cheops each carried a single 300-pounder muzzle-loading Armstrong forward, firing over the pronounced ram-bow, with two 68-pounder weapons in the after redoubt. As such they were built to absorb tremendous punishment as well as to deal it out. 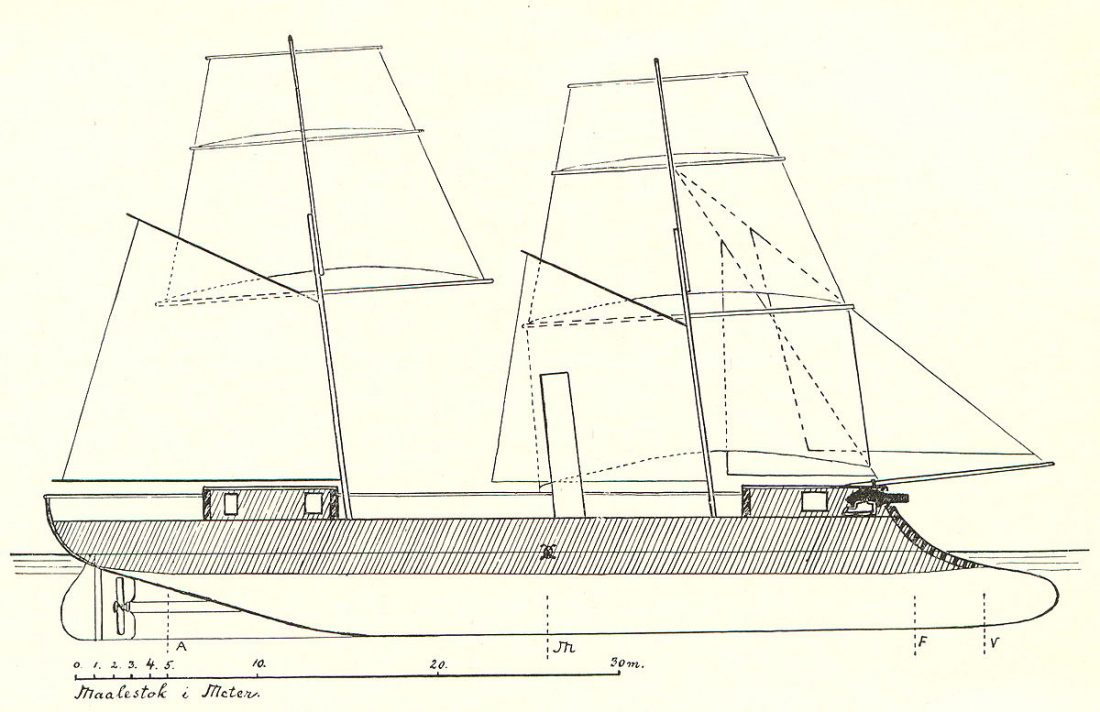 Sail Plan of Cheops and Sphynx – note armouring above ram.
Note also how the weapons are carried high behind thick armour,

The vessels were constructed in Bordeaux, on France’s Atlantic coast, and were launched early in 1864. Human greed is however a major obstacle to keeping a project of this sort secret. In this case the subterfuge was exposed by a clerk at the shipyard who supplied information on the deal – and hard evidence, in the form of documentation – to the United States ambassador in Paris.  With a diplomatic crisis about neutrality brewing, the French Government had no option but to block the sale. A new customer was immediately available however. Prussia’s “Iron Chancellor”, Otto von Bismarck, supported by the Austro-Hungarians, had precipitated war with Denmark. Heavily outnumbered, the Danish resistance was fierce, heroic and doomed. The bright spot for Denmark was the performance of its navy, both in support of land operations and on the open sea. (Click here to see recent blog about the 1864 Battle of Heligoland). It was accordingly inevitable that both the Danes and their enemies should be looking to purchase more warships. Sphynx and Cheops would fit the bill to perfection. In a cynical deal in which a sale to one side was balanced by a sale to the other, the Sphynx was sold to Denmark – and renamed Stærkodder – while the Cheops was purchased by Prussia and called Prinz Adalbert. Thus were neutrality concerns sidestepped! 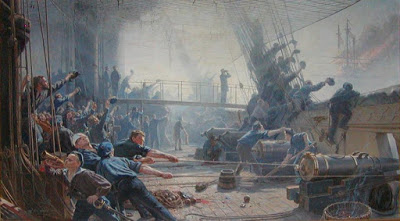 Denmark’s day of glory – the Niels Juel at the Battle of Heligoland, 9th May 1864

A Danish crew arrived in Bordeaux in June 1864 to start acceptance trials and take her to Denmark thereafter. (One wonders if there were any embarrassing encounters with a Prussian crew arriving to take over Prinz Adalbert!). The war was however winding down – with Denmark comprehensively beaten – and by 1st August a preliminary peace treaty had been signed. By the time Stærkodder arrived in Copenhagen all was over and she was by now essentially surplus to the requirements of the vanquished nation.

Confederate agents had however followed the Sphynx/ Stærkodder affair with interest and were still determined to acquire her. Negotiations – which must have required a high degree of secrecy – resulted in a sale by Denmark and in early January 1865 a Confederate crew commanded by Captain Thomas Jefferson Page (1808 – 1899) took delivery. The ship was commissioned at sea as the CSS Stonewall.

The second part of this article – due later this week – will tell of the game of hide-and-seek played by the CSS Stonewall with warships of the United States Navy.

It’ll be available in paperback then. It’s already available for pre-order to get it delivered automatically on your Kindle, Tablet or Phone on Dec 8th. Click as below to pre-order: