The Revolutionary and Napoleonic Wars saw very large numbers of battles at sea between small numbers of ships, but few in which entire squadrons engaged and yet fewer fleet actions on the scale of the Nile, Camperdown or Trafalgar. On one occasion however a medium-sized Royal Navy squadron escaped from a confrontation which, due to the disparity of forces, could have ended in annihilation. That it did not reflected the cool head and tactical mastery which the British commander, Admiral Lord William Cornwallis (1744 – 1819), demonstrated in his use of the frigate HMS Phaeton.

Cornwallis had come to prominence in 1782, in the four-day Battle of the Saintes, as captain of the “74” ship-of-the-line HMS Canada. He had already engaged, and defeated, a similarly sized French ship, the Hector, when he saw the opportunity to close with the enemy flagship, the massive 104-gun Ville de Paris. Despite the disparity in size, Cornwallis continued his attack for two hours and though the larger vessel’s position proved to be hopeless, the French Admiral de Grasse (1723 –1788) saw it as a point of honour not to strike his flag to anybody but an enemy admiral. He only surrendered when Admiral Sir Samuel Hood (1724-1816) came up in HMS Barfleur, by which stage only de Grasse himself and two other men were alive and unwounded on the upper deck. de Grasse stated after the battle that Cornwallis’s HMS Canada had done him more harm than all the rest of the Royal Navy force together. 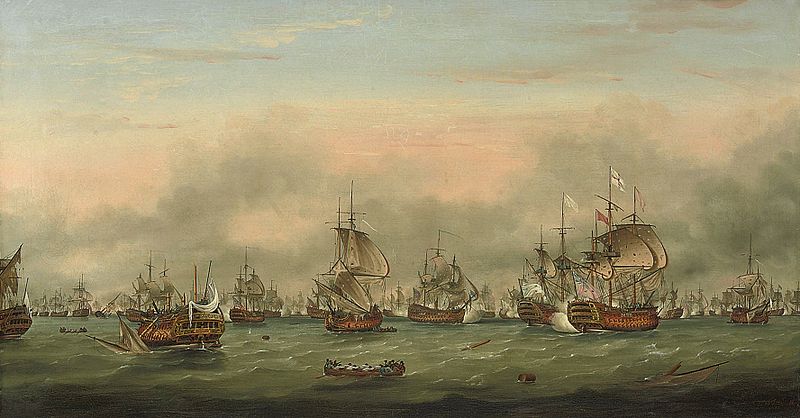 Battle of the Saintes, 1782 – major fleet action in which Cornwallis came to prominence. Painting by Thomas Mitchell (1735-1790)

On 7th June 1795 Cornwallis, in his flagship HMS Royal Sovereign, was cruising on blockade duty off Belle Isle, on the southern coast of Brittany, with five “sail-of-the-line” and two frigates. A French convoy of merchantmen, under escort of three ships-of-the-line and six frigates, was sighted. In the subsequent action, in which the French escorts beat an ignominious retreat, eight merchantmen were captured. Cornwallis remained on station thereafter and just over a week later, on 16th June, one of his frigates signalled sighting of the French fleet – a huge force consisting of thirteen sail-of-the-line, several frigates, two brigs and a cutter. Retreat was now the better part of valour and Cornwallis decided – correctly – to decline combat. The wind declined at first, then afterwards coming round to the north. This allowed the French ships  to get to windward, and the next morning’s daylight – in calm conditions – they were seen mooring on both quarters of the British squadron. Cornwallis’s force was now potentially the meat in the sandwich.

During the preceding day, and through the night, Cornwallis had led the retreating ships in HMS Royal Sovereign, so as to be able to take advantage of any favourable opportunity that might present itself in the night for altering course and escaping unseen by the French. With daylight however he changed his disposition, ordering his two slowest-sailing ships, HMS Brunswick and HMS Bellerophon, to lead, and the more nimble HMS Mars and HMS Triumph to form the rear. He himself, in HMS Royal Sovereign, formed a connecting link, ready to come to the assistance of any of his squadron that might need support. It was now in the power of the French admiral to engage closely, and at about nine in the morning a line-of-battle ship and a frigate opened fire on HMS Mars. 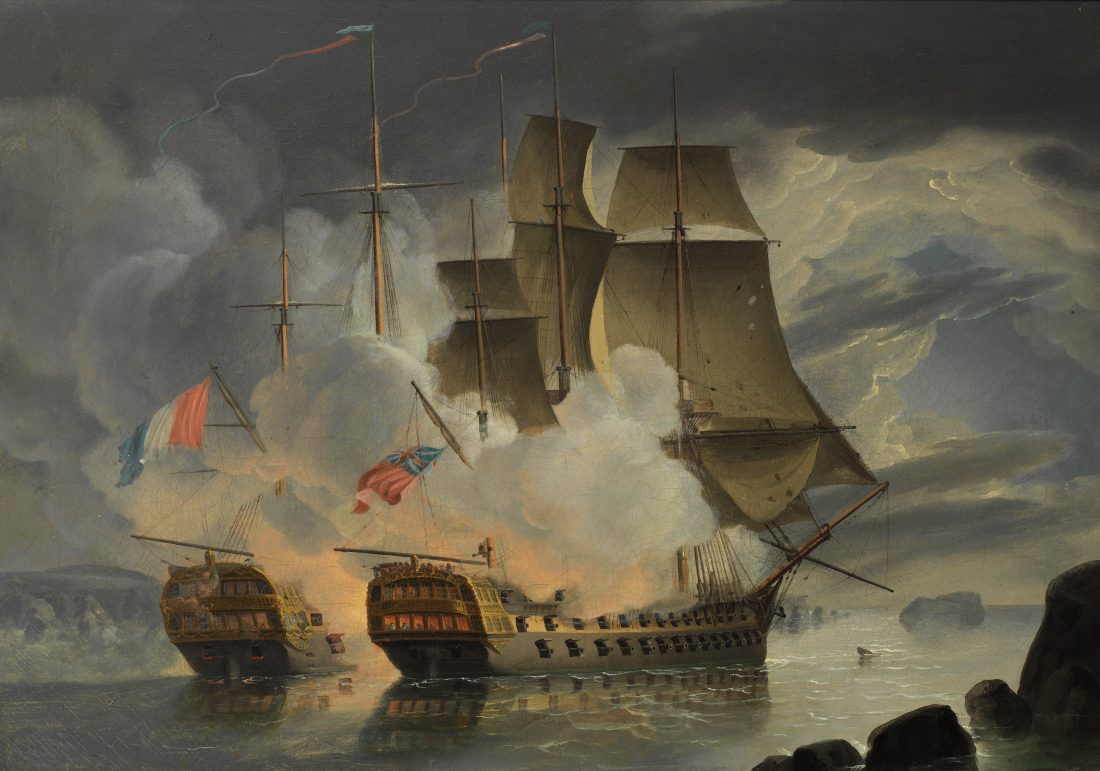 HMS Mars’ even greater moment of glory came in 1798 when she engaged the French Hercule in a rare single-ship action between two ships-of-the-line. Painting by John Christain Schetky (1778-1874)

From this time an almost constant cannonade was kept up. The French ships fired at a distance as they came up but and made no attempt to close and board. HMS Mars, HMS Triumph and HMS Royal Sovereign returned fire, thereby protecting the slow-sailing HMS Brunswick and HMS Bellerophon. These latter two were now making every effort to increase speed, lightening themselves by cutting away their anchors and boats, throwing some of their ballast overboard and crowding on all sail. This inconclusive chase continued through the day and into the afternoon. Only then did the enemy close upon the rear ship, HMS Mars. Four of the French ships of the line bore down on her. Had they concentrated their fire and laid themselves alongside, the outcome would have been fatal for her. At this critical juncture a ruse already underway was to change the situation completely.

In the early morning Cornwallis had called by signal for a boat from the frigate HMS Phaeton. The young officer who came across to get instructions to bring back to his captain would later be Admiral Sir Francis Beaufort (1774 –1857), creator of the Beaufort Scale for indicating wind force. He was met on Royal Sovereign’s deck by Cornwallis, who told him: “Stop, sir; listen: go back immediately and tell your captain to go ahead of the squadron a long way, and, when far enough off, to make the signals for seeing first one or two strange sail, then more, and then a fleet; in short, to humbug those fellows astern. He will understand me. Go.”

HMS Phaeton sailed fast, but was not until three o’clock in the afternoon that she was sufficiently far ahead to signal back with credibility that initially one, two, fthen ive, new sail had been sighted. She followed this up by signalling an even larger British force was approaching. It was known that the French had copies of the Royal Navy’s tabular signals, HMS Phaeton hoisted a signal to draw on the fictitious squadron. She then turned to sail back towards Cornwallis’s force, as if guiding the newcomers on. By sheer chance three small vessels were actually just visible over the horizon. Wholly taken in by the ruse, and apparently faced with the possibility of action with a larger force, the French broke off the action and retreated. Cornwallis’s entire force escaped without loss of a single ship. 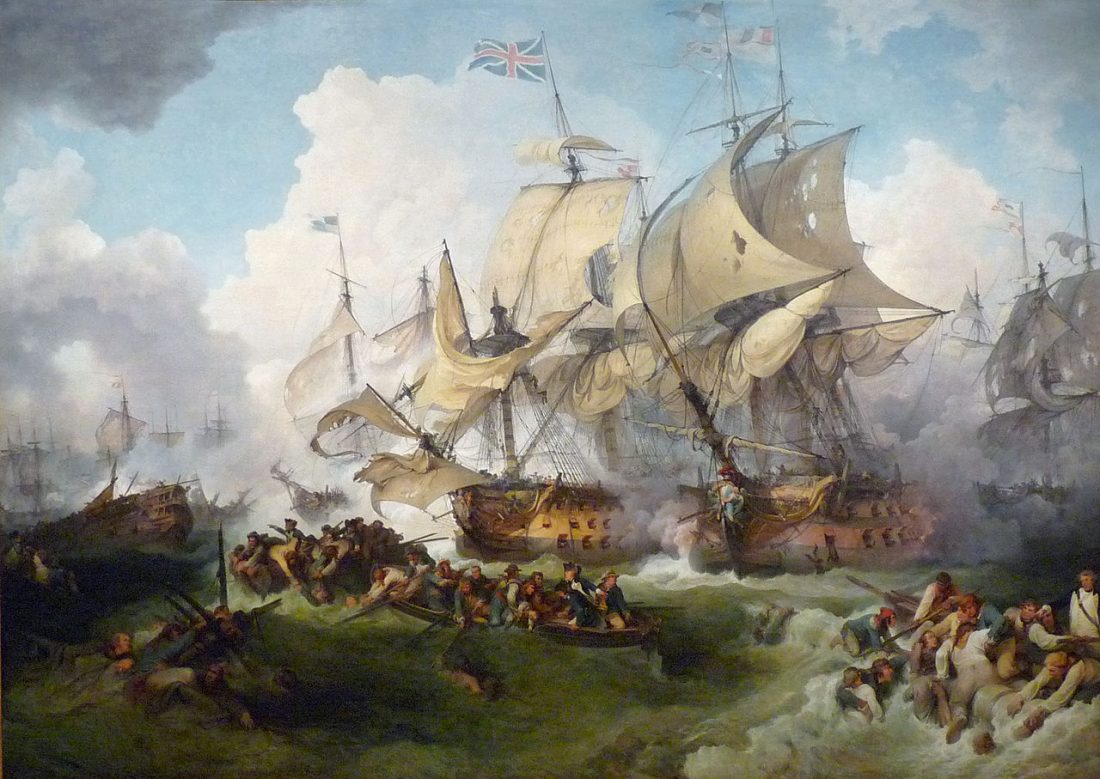 How the battle might have developed had the French exploited their numerical advantage – Philippe-Jacques de Loutherbourg’s painting of the “Glorious First of June”, 1794

One cannot but wonder if poor French morale in the aftermath of the brutal culling of the French naval officer-corps during the Revolution did not play a significant role. Defeat and failure could well be rewarded with the guillotine, and officers who still remained in service were likely to be highly risk-averse – as shown by the unwillingness to close, even when the British force was outnumbered. Cornwallis, by contrast, had command of a superbly confident and professional force. In his later report he gave special credit to the seamen and marines of HMS Mars and  HMS Triumph, which had the brunt of the French fire. He stated that, “instead of being cast down at seeing thirty sail of the enemy’s ships attacking our little squadron, they were in the highest spirits imaginable, and although circumstanced as we were, we had no great reason to complain of the conduct of the enemy, yet our men could not help repeatedly expressing their contempt of them. Could common prudence have allowed me to let loose their valour I hardly know what might not have been accomplished by such men.”

Cornwallis himself had given an example of calm resolution, shaving, dressing and powdering his hair during the morning chase according to his normal routine. He apparently said to his flag captain that he had been in similar situations before, and knew very well what they, the French, would do.

What followed was to prove him wholly correct in his evaluation of the enemy.