Author of the Carlisle and Holbrooke series

As author Chris Durbin tells in the introduction to the article he contributes below, I met him at the Weymouth Leviathan Literary Festival in 2016, at which I ran a workshop on plotting of historical novels and he was a participant. Since then, Chris’s literary career has taken off with a series of naval adventures set in the Seven Years War period (1756-63) – more details at the end of this article – and he now publishes, as I do, through The Old Salt Press. When we met for lunch a few weeks ago, Chris noted that I had introduced the real-life character of Miss (later Dame) Agnes Weston (1840-1918) as a subsidiary character in my Dawlish Chronicles  fiction. She was one of the great – and unlikely – Victorian philanthropists, a dauntless spinster who devoted her life to the welfare of seamen. As an ex-Royal Navy officer, Chris was familiar with her continuing legacy and  he told me the story of his own debt to her. I was so taken with his tale that I suggested that it could be the basis for a guest blog. He has obliged, and you’ll find it below.  I hope you’ll like it.

The Tale of the not-so-Ancient Mariner by Chris Durbin 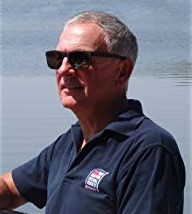 I first met Antoine back in 2016 at the Weymouth Leviathan Festival where I attended his workshop for aspiring writers of historical adventure novels. He called it ‘From Idea to Plot,’ and I learned how to weave together an historical incident and fictitious characters to make a compelling story. Sadly, we lost contact over the next few years as Antoine continued his brilliant Dawlish Chronicles series and I retired from my industrial job and took my first steps into authorship with the Carlisle and Holbrooke series of naval adventures.

We met again in January 2020 at a remote pub in rural Wiltshire. So remote that I could see no way of getting to it until I realised that there was an alternative approach road – nothing more than a lane really – that avoided the ford through a roaring spate, the hazards of rural England in the winter.

As we talked, Antoine let slip that he was considering again using Dame Agnes Weston as an historical character in one of his future books, she had already made brief appearances in Britannia’s Spartan and Britannia’s Amazon. For those of you unfamiliar with the name, ‘Aggie’ Weston was a Victorian philanthropist who founded the Royal Sailor’s Rests, one of them at Portsmouth. The building was destroyed by bombing in the second world war, and much of its good work and all of Aggie’s spirit was transferred to another building, in Queen Street, now officially called ‘The Royal Maritime Club.’ However, it can’t so easily shake off the name given to it by generations of grateful sailors who stubbornly still refer to it as Aggie Weston’s.

It reminded me that I am one of those grateful sailors. Pull up a bollard, swing the lamp, and let me tell you a story…

Forty years ago, I was coming to the end of an appointment as a fighter controller and watchkeeping officer in HMS Hermes, then fitted out to carry helicopters in the dual roles of anti-submarine and amphibious warfare. 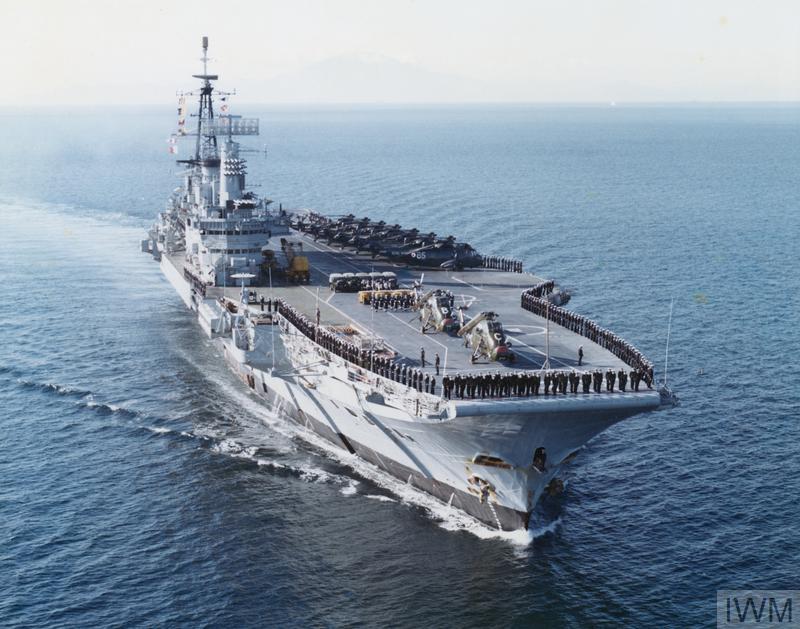 Hermes had spent the first few months of the year across the Atlantic and was coming home for the refit that would transform her into a fixed-wing carrier again, flying the new short take-off, vertical landing Sea Harrier aircraft. The families of the ship’s company were in for a treat. Hermes was to anchor at Spithead before entering harbour to embark around a thousand people by boats so that they could experience the grand old ship passing between the Round Tower and Fort Blockhouse into Portsmouth. Being the most junior lieutenant in the ship, I was naturally ordered to organise the families at the dockyard. The day before the ship’s arrival, I disembarked by helicopter to a naval air station in Cornwall and took the long rail journey to Portsmouth. By the morning of the great event, I was standing in the Port Admiral’s office clearing up the final details, having left a Chief Petty Officer in charge at the jetty. The families were starting to arrive; by car, by train, by bus, on foot and by harbour ferry. All appeared to be going well, except for one small detail: the weather!

Overnight, a tight depression had moved towards the Midlands, bringing gale force winds and a cold, hard rain to the channel and the southern counties, Spithead was an angry wasteland of grey sea and white blown spray. The Queen’s Harbourmaster looked doubtful, as well he might. He had two principal problems: first, the conditions were marginal for boatwork, and second, the wind at that point was too strong to risk bringing the navy’s biggest ship in through the narrow entrance.

Meanwhile, the families, ranging in age from new-born babies to octogenarians were gathering at the Jetty, almost in the shadow of Nelson’s HMS Victory and a short walk from the dockyard gate. There was little cover, as I remember it, just a Victorian railway station shelter, a hangover from the days when trains ran all the way into the dockyard. The families were becoming cold and wet but none of them wanted to leave for fear of losing their place on the boats. 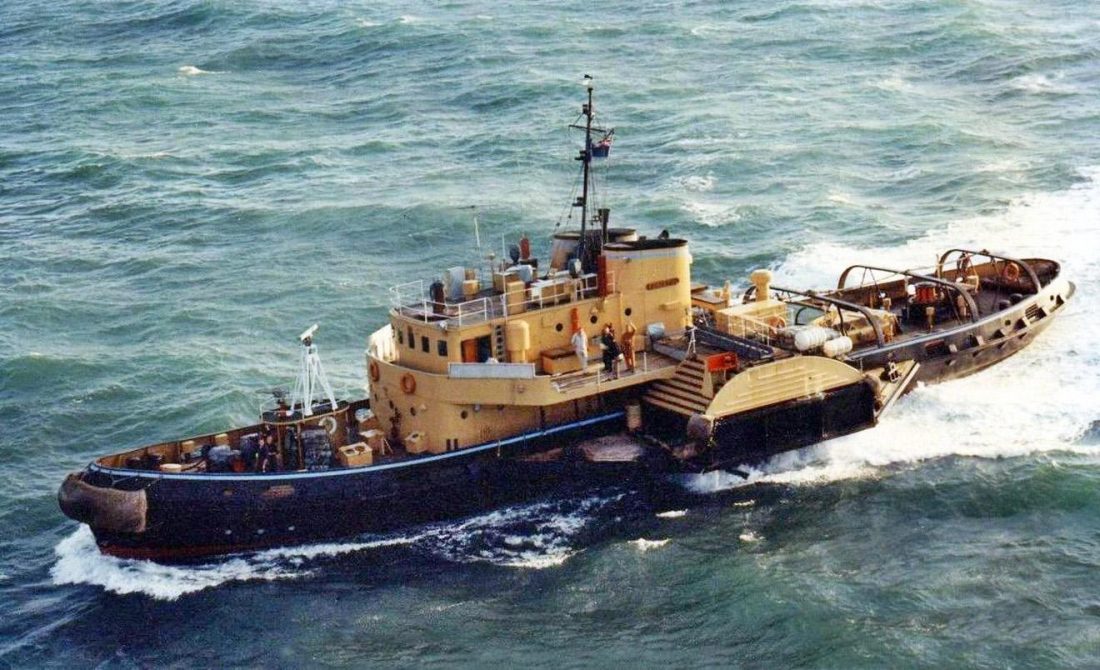 In those days, the navy had a class of big paddle-wheel tugs built specifically to move aircraft carriers. The harbourmaster decided that it would be safe to use one of those – RMAS Forceful, I seem to remember – and she duly embarked the first wave of intrepid voyagers at the King’s Stairs. We all held our breath, clustered around the VHF transceiver. First, we heard that the tug had been forced to abort the approach, then on the second attempt she manoeuvred successfully alongside Hermes. I breathed a sigh of relief as I heard that a dozen or so passengers had made it onto the carrier, but then disaster struck. The ship’s accommodation ladder just wasn’t strong enough for the pressure that Forceful (how aptly named!) exerted to keep herself alongside and a particularly strong lurch broke the whole boarding apparatus. There was nothing for it but for the tug to return to harbour with those of the passengers that hadn’t made it onto the carrier. There would be no more boat trips that day, and furthermore the deteriorating conditions had put an end to any thoughts of Hermes entering harbour until well into the afternoon or dog watches. But what to do with the families?

With reluctant steps, I made my way to the Jetty, the bearer of the bad news and expecting to be treated accordingly. It was a curious scene. The near-horizontal rain had long ago soaked everyone, but they were singing! That Chief Petty Officer would have made a professional game-show host look like a glum old stick. He was walking up and down with the half-dozen sailors from the barracks at HMS Nelson, telling stories and jokes, starting singsongs and generally keeping up morale. It wasn’t at all what I expected, but I was still faced with the daunting prospect of telling all these people that they wouldn’t be going out to the carrier and that it wouldn’t be berthing for at least another six hours.

‘Don’t worry, sir,’ said the Chief after a moment’s thought, ‘just keep them happy for a few minutes, I’ll be right back,’ and he strode off in the direction of Victory Gate.

It was all very well him telling me not to worry, but it was the longest twenty minutes of my life. I had no idea what I would do with these people if he didn’t come up with a solution. I reckoned that at a push we could squeeze everyone into the various dockyard buildings, but few of them were heated and none had the facilities that were needed.

I was just starting into the tenth rendition of ‘Roll Out The Barrel,’ the only song I could think of, when the Chief returned at a jogtrot.

‘Aggie Weston’s!’ he declared in triumph.

I looked at him blankly.

‘They’ll take ‘em all, and it’s only a ten-minute walk away.’

And they did. The blessed Aggie Weston’s staff put on beans on toast and Mickey Mouse movies for the whole lot of them. By four o’clock the weather had moderated enough for the Queen’s Harbourmaster to allow Hermes to enter, and by six o’clock they were all united with their fathers, sons, husbands and boyfriends. Victory from the jaws of defeat!

Chris Durbin is the author of the Carlisle & Holbrooke series of naval adventures. Set in the middle of the eighteenth century, during the Seven Years’ War (called the French and Indian War in America), the books follow the adventures of a naval post-captain from Virginia and a young master’s mate from Hampshire, England. The first of the – so far – six book series is titled ‘The Colonial Post-Captain’ and is centred around the British loss of the island of Minorca at the start of the war.