The Royal Navy’s Capture of Curaçao 1807 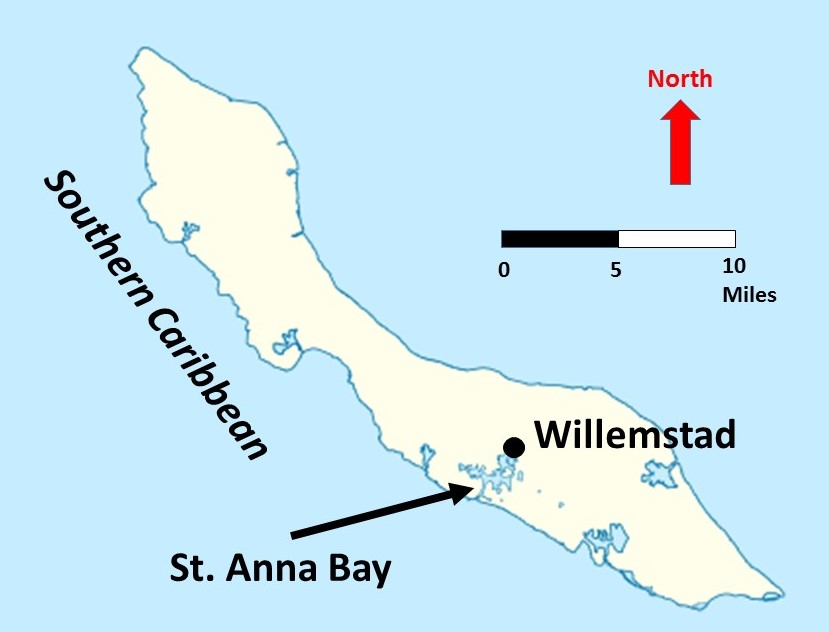 Lying some 40 miles north of the Venezuelan coast, the Caribbean island of Curaçao is today a separate country within the Kingdom of the Netherlands. It was first colonised by the Dutch in the mid-17th Century and was to have major strategic importance thereafter since it contains one of the most enclosed, and easily defended harbours in the world. This is the Saint Anna Bay, on which the island’s capital, Willemstad, is located. The bay is approached through a mile-long channel that is nowhere wider than some 300 yards.  In the colonial era this approach was easily defensible by flanking forts, thereby making the island a secure base for Dutch naval forces in the Caribbean.

From 1795 to 1813 the Netherlands were dominated by the French, until 1806 as the so-called “Batavian Republic”, and thereafter as the “Kingdom of Holland” with the Emperor Napoleon’s brother Louis (father of the future Emperor Napoleon III) as king. French rule was by no means unpopular with large portions of the population and Dutch troops, and the Dutch Navy, fought in support of the French. Most notable of such actions was the defeat of the Dutch Fleet by Britain’s Royal Navy at Camperdown in 1797  and the fact that some 14,000 Dutch troops marched in Napoleon’s Grande Armée in the 1812 invasion of Russia. Major British campaigns were launched against Dutch possessions in the East Indies and Dutch naval bases in the Caribbean, such as Curaçao were havens for French as well as Dutch naval forces.

1836 Map of Curaçao – inset at top right is map of St. Anna Bay & of the channel leading to it

Considering its importance, and despite its strong defences, Curaçao was to be captured by Britain with almost ludicrous ease. In late 1806 – a period when French naval power was in decline – word reached the Royal Navy’s commander-in-chief on the Jamaica station, Vice-Admiral Dacres, that there was support from some citizens on Curaçao for throwing off French allegiance. Dacres accordingly dispatched a task force consisting of the frigates HMS Arethusa, (commanded by Captain Charles Brisbane) and HMS Latona (Captain Wood), together with HMS Anson (Captain Charles Lydiard), originally a 64-gun “third rate” but later cut down to frigate dimensions. Another frigate, HMS Fisgard (Captain Bolton), which had been captured from the French in 1797, joined the others close to Curaçao.

Brisbane, leading the British force, suspected that neither the island’s governor, nor the garrisons of its forts, might not be as eager as the parties who had contacted Dacres to break the French connection. Rather than enter into diplomatic negotiations, which could be strung out over a long period, thereby allowing defences to be strengthened, he revolved to launch an immediate attack that would rely heavily on surprise. His objective was to drive directly past the gun batteries at the mouth of the access channel and into the bay of St. Anne. Once there the guns of his ships could threaten the town of Willemstad and provide a powerful inducement to the authorities there to surrender. Success depended on two factors – firstly an appearance so sudden that the four frigates would be past the shore defences before their crews had time to man them effectively and, secondly, wind conditions that would allow the ships to drive straight up the narrow channel and into the bay beyond. 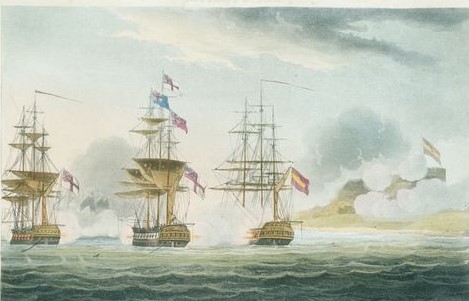 On the last day of December 1806 Fortune was to favour Brisbane as regards both these requirements. A favourable wind arose which would be ideal for his purpose, and celebrations of the New Year, quite probably involving much alcohol, were likely to lead to a collective and temporary relaxation of Dutch watchfulness. The defences were powerful –  Fort Amsterdam, a two-tier masonry structure on the right of the channel, mounted 60 guns and opposite lay a chain of batteries anchored at the end by the formidable Fort République.  Together, these two fortresses would be capable of shredding  Brisbane’s force and he might well have recalled Nelson’s uncomfortable dictum that “A ship’s a fool to fight a fort”. 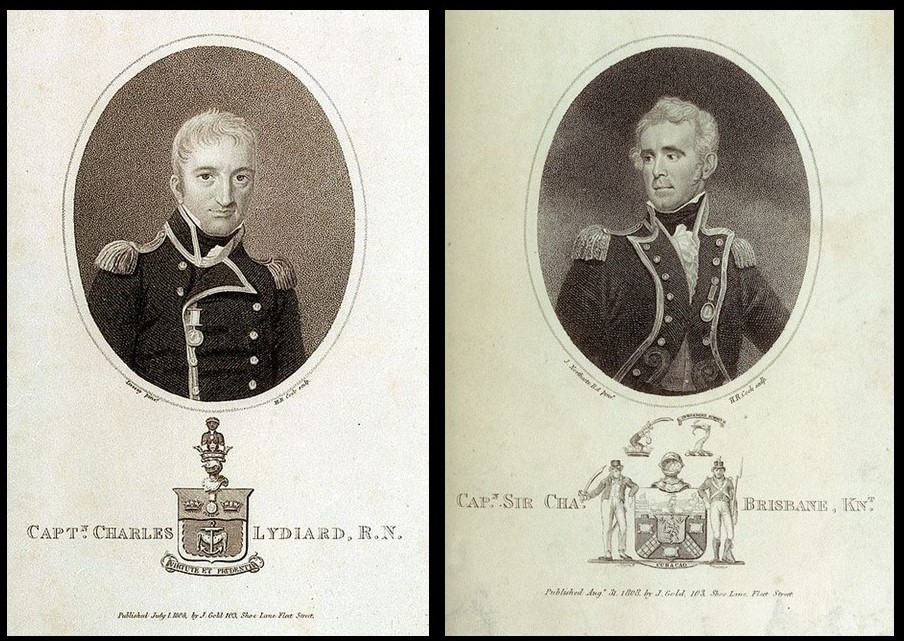 At dawn on January 1st 1807 – by which time many of the defenders might be nursing hangovers – Brisbane’s force drove for the channel under a flag of truce, with HMS Arethusa leading the other three frigates. Strong parties had been mustered on all of them for boarding and landing duties. The Dutch, surprised, opened a hot but ineffectual fire but the British ships drove into the port. Here they found a 36-gun frigate Halstaar, a 20-gun corvette Suriname, and two large armed schooners. Brisbane brought Arethusa so close inshore that her jib-boom projected over the city-wall of Willemstad.  He now sent a summons to the governor, to the effect that the British squadron had come to protect, not to conquer the inhabitants, but that if a shot was fired, he should immediately storm the batteries.

The governor was given five minutes to make up his mind and, when none was received, Brisbane ordered fire to be opened on the Dutch ships. Three broadsides sufficed to allow Arethusa to take the Halstaar and for the Anson to capture Suriname. Assault parties were now landed to attack Fort Amsterdam, some smashing a gate open with crowbars while more scaled the walls. Resistance ceased after ten minutes. Storming of the town’s citadel and several outlying batteries went just as quickly and as successfully. Only Fort République now remained and was still strong enough to smash the British ships. Faced however by an assault party of 300 seamen and marines, the Dutch commander lost his nerve and surrendered without further resistance. By 1000 hrs all fortifications had yielded and by midday a capitulation of the entire island was formalised.

The cost of this remarkable victory was low – three British killed and fourteen wounded, as compared with over 200 Dutch casualties both ashore and afloat. (When mention is made of “wounded” however it should be noted that gangrene was often to cause deaths later, and that in many cases the only way to avoid it was by amputation of a limb. However small the numbers, casualties were never “low” for ,victims and their families).

Brisbane was deservedly knighted for his victory and was to see little further service. Much of his later life was spent as governor of the Caribbean island of St. Vincent, where he was to die, aged 60, in 1829. 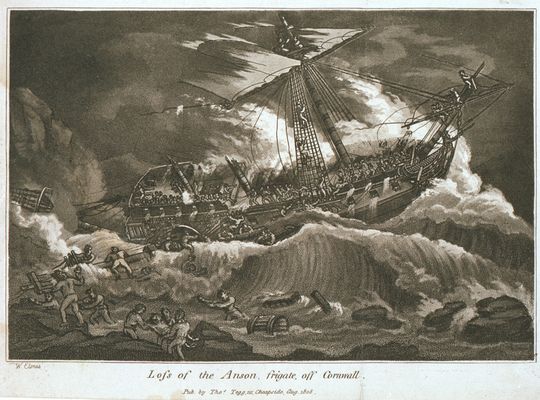 Contemporary impression of the loss of HMS Anson, December 1807

A sadder fate awaited Captain Charles Lydiard, who returned to Britain in HMS Anson later in 1807. After refitting, Anson was allocated to blockade duty off the coast of Brittany. On December 28th, less than a year after his exploits at Curaçao, Lydiard and the Anson were caught in a gale on a lee shore off Cornwall. The ship still carried the heavy spars from her days as a third-rate, and she rolled excessively.  Anchors were run out but the cables parted the following day and Lydiard attempted to run the vessel on to a beach to save lives. The surf was too furious to allow launching of boats from the ship and survivors managed to reach the shore only by clambering along the fallen main-mast. Throughout this crisis Lydiard remained on deck to supervise the evacuation. He was at last washed away and drowned while attempting to save a ship’s boy – an end as heroic as his life itself.