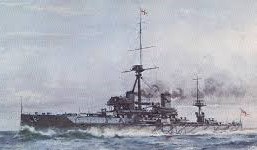 The launch of HMS Dreadnought in 1905 made all other battleships afloat into “Pre-Dreadnoughts” overnight, incapable of fighting in the battle line with the new “all big-gun” battleship and her successors. In the Royal Navy, pre-dreadnought designs had been all but standardised since the mid- 1890s – vessels of typically 15,000 tons and 400 to 450 feet in length. Powered by triple expansion engines of 12 to 18,000 horsepower, top speeds were in the range of 17.5 to 20 knots. Main armament as four 12-inch guns, with some dozen 6-inch weapons as secondary armament, mounted in most cases in casemates. In Britain’s last pre-dreadnought classes, the King Edward VIIs and the Lord Nelsons the secondary armament was increased to 9.2-inch guns. Two exceptions were HMS Swiftsure and HMS Triumph, originally ordered by Chile but purchased by the Royal Navy, with 10-inch main weapons and 7.5-inch secondary. Crews in all cases were of the order of 800 men. 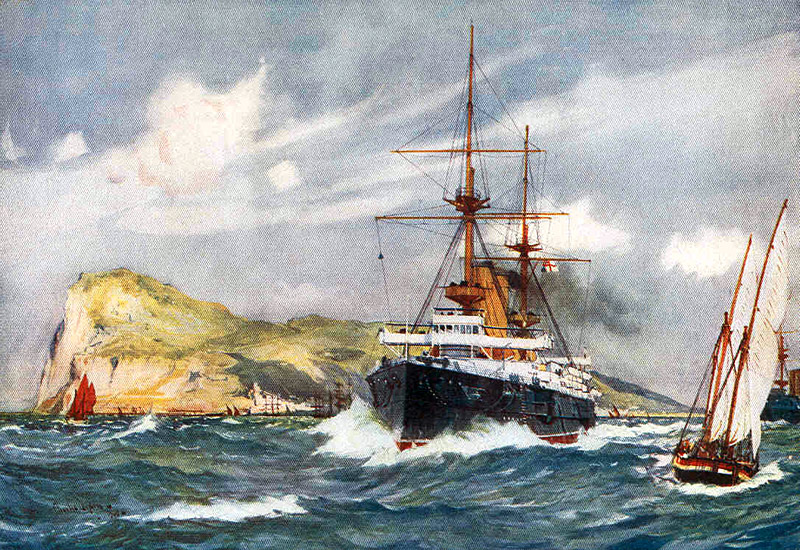 The classic image of the Royal Navy pre-dreadnought at the turn of the century – still in Victorian livery of black hull. white upperworks and turrets, ochre funnels and masts.

Obsolete Britain’s pre-dreadnoughts might be, but at the outbreak of war in 1914 a total of some forty were still in service, all less than twenty years old and many only ten. Only the eight King Edward VIIs were to serve, though only briefly, with the Grand Fleet, which from early 1915 onwards was composed solely of dreadnoughts and super-dreadnoughts. Unfit to take their place in the battle line to meet the Imperial German Navy in an expected climatic and decisive clash, the forty pre-dreadnoughts were however to play very useful roles in secondary theatres, often in shore-bombardment roles. Such service included East Africa (Tanganyika – HMS Albion and HMS Goliath), West Africa (Cameroons – HMS Vengeance), South-East Pacific and South Atlantic (HMS Canopus), White Sea (HMS Jupiter and HMS Glory), Black Sea (HMS Caesar – at war’s end), Tsingtao on the Chinese coast (HMS Triumph) and others in southern home-waters and the Northern Patrol, between the Orkneys, the Shetlands and Norway, to intercept blockade runners. 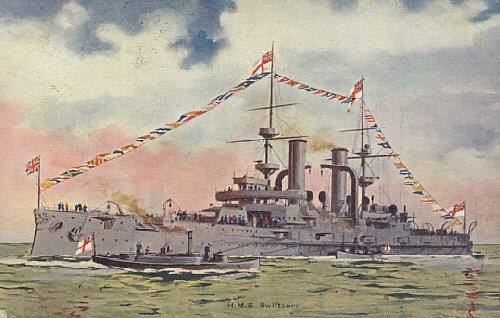 HMS Swiftsure – her sister HMS Triumph was lost at Gallipoli

The most intense service was however to be at the Dardanelles and Gallipoli in 1915, where four pre-dreadnoughts, HMS Majestic, HMS Triumph, and HMS Goliath by were lost to torpedoes (click here to read a blog article about this) and HMS Irresistible and HMS Ocean by mine. 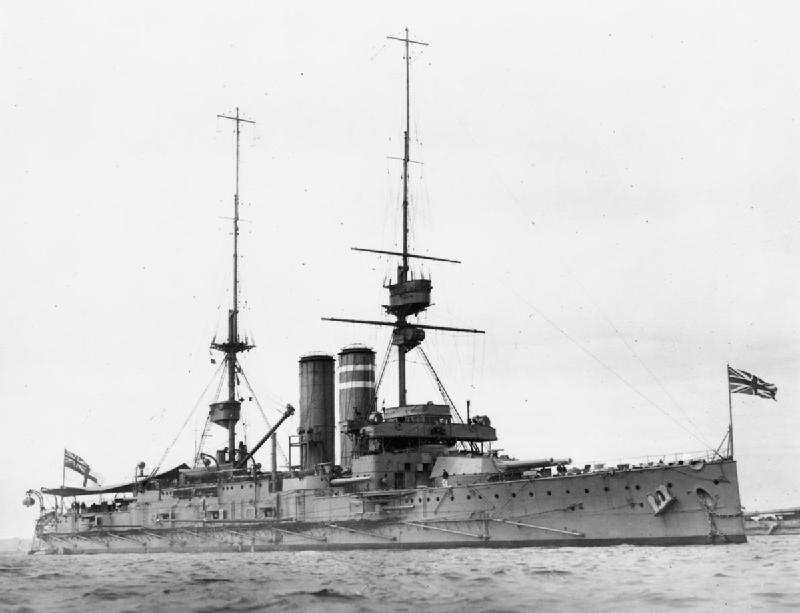 One of the majestic Edward VII Class, the name ship of which was sunk by mine

Elsewhere in the Mediterranean, HMS Cornwallis was sunk by torpedo and HMS Russell by mine while these latter weapons also claimed HMS Edward VII and HMS Formidable in home-waters. HMS Bulwark was blown up by accidental magazine explosion. HMS Britannia, torpedoed off Spain two days before the armistice in November 1918 was to be the last major loss of the war. (Click here for a blog article about it). This brought the Royal Navy’s total pre-dreadnought losses to eleven, over a quarter of the number at the outbreak of war, making service on board these ships significantly more hazardous than in the dreadnoughts, super-dreadnoughts and battle-cruisers of the Grand Fleet. 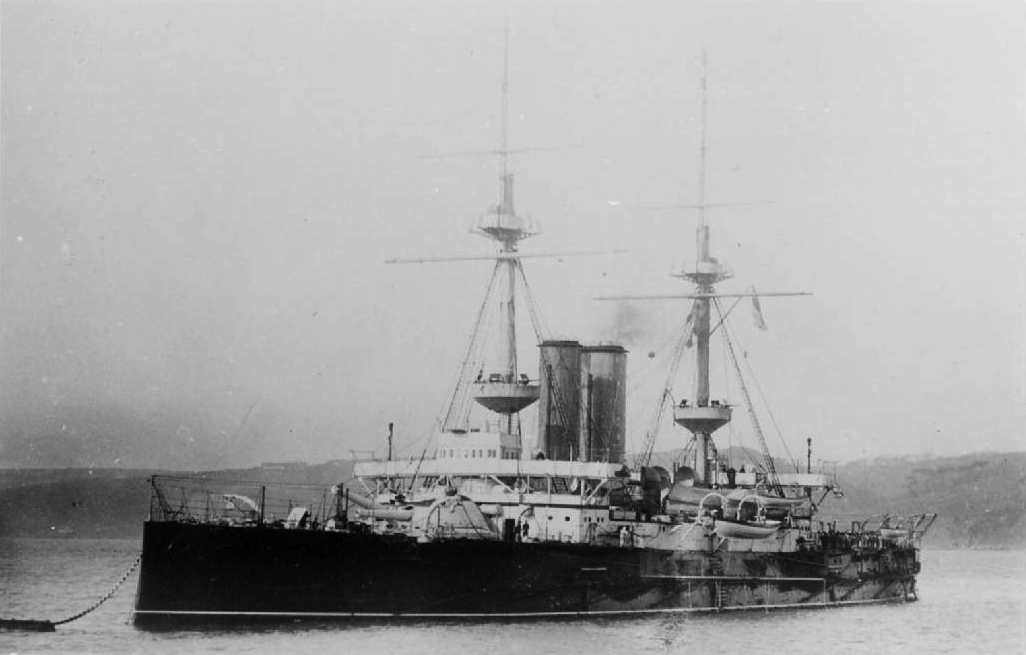 HMS Ocean, another mine-victim at the Dardanelles

It is notable that all the pre-dreadnoughts, other than HMS Bulwark, were destroyed by damage below the waterline. They had been designed when the potential for effective attack by submarine, or extensive us of mines, had been either unforeseen or underestimated. Protection against torpedoes had been allowed for by use of nets swung out on booms from the sides, a measure that was practical only for ships at anchor or at speeds too low to be practical in wartime operations. Arguably, the lessons of the Russo-Japanese War in 1904-05, when both Russian and (British-built) Japanese pre-dreadnoughts had been sunk by mine, were not accorded sufficient attention. The protective anti-torpedo bulge, still lay in the future.

But that’s another story!