Skip to content
Loss of the liner La Bourgogne, 1898

The loss of the liner La Bourgogne, 1898

The sinking of the Titanic in 1912 remains locked in the public imagination as the supreme tragedy of North Atlantic passenger travel, all the more so since elementary safety precautions could have saved many more lives, even if they could not save the ship. What is however quite horrifying is that this disaster was preceded by so many others, with lesser but still substantial death tolls. The mantra so common today in the aftermaths of disasters – “Lessons must be learned” – was equally common in those years, but the lessons were not learned and preventive measure were not implemented. Provision of an adequate number of lifeboats was one obvious requirement, but so too was training and discipline of ships’ crews in the event of emergencies. The loss of the French liner La Bourgogne in 1898 was one of the most disgraceful of such disasters, the final death-toll being in no small measure due to the behaviour of a crew whose motto appears to have been “Women and Children Last”. 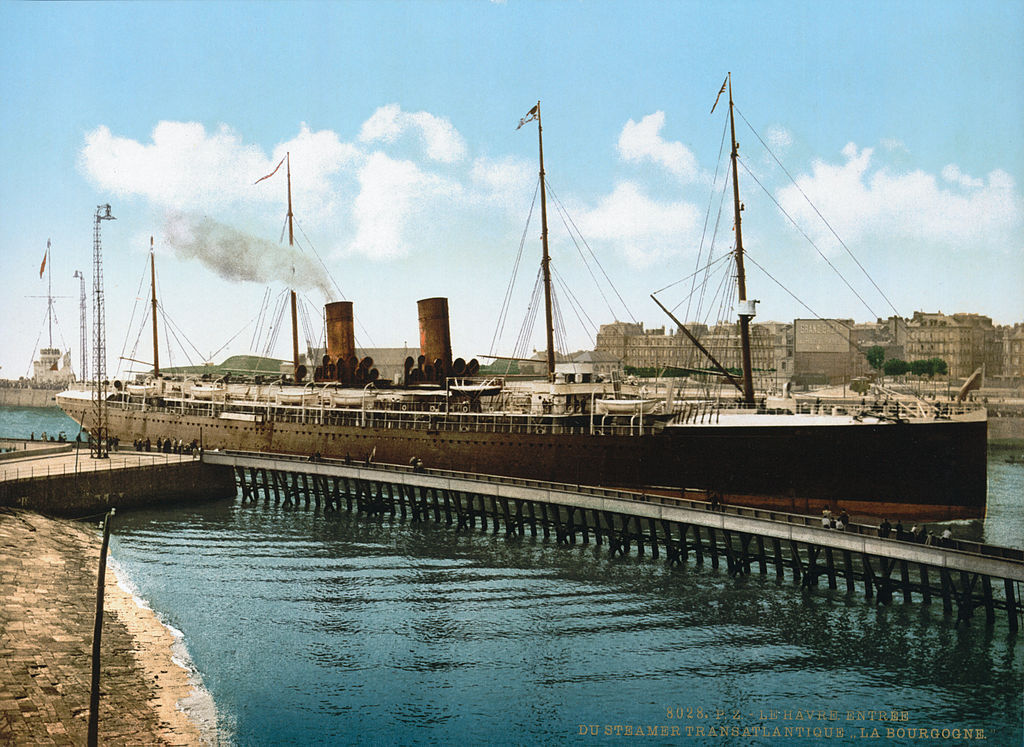 Launched in 1885, and entering service the following year on the Le Havre- New York route, the 7395-ton, 490-ft La Bourgogne set a new standard of speed, crossing in just over seven days. Her maximum passenger capacity was just over 1000, of whom some 390 were accommodated in first-class.  Other than her enviable reputation for speed – 17 knots was considered high at this time – her career seems to have been uneventful until 1896 when she collided with a British steamer, the Ailsa, in New York Harbour. The 2000-ton Ailsa was at anchor in fog at the time and she sank in situ. On this occasion, it was the crew of the Ailsa that appears to have behaved deplorably, as evidenced by a question asked by an MP in the British Parliament in March 1896, in the aftermath of the accident. The following quote is verbatim:

HAVELOCK WILSON MP: I beg to ask the President of the Board of Trade, whether his attention has been directed to the reports of a collision between the British steamship Ailsa and the French Transatlantic liner Bourgogne whether he is aware that the major portion of the crew of the Ailsa were foreigners, who immediately after the collision made a rush for the lifeboats, one of them striking a lady passenger and another kicking a lady in the side, and that they drew their knives and threatened the passengers; and afterwards took away the only available lifeboat, in spite of the protests of the captain; whether he will cause an immediate and full Inquiry to be held into the whole of the circumstances attending this collision; whether he can state if the crew of the Ailsa were competent seamen, able to speak and understand the English language; and, whether they were shipped in the United Kingdom or before Her Britannic Majesty’s Consul at New York?

Even allowing for the general distrust of “foreigners” – i.e. non-British citizens – was rampant at the time in Britain, the case seems egregious and indicates just how poor the safety standards and procedures on ocean-going shipping still were. It was the crew of La Bourgogne herself however that was to feature in an equally disgraceful manner two years later. The liner had been refitted in 1897-98, with a quadruple-expansion engine – then the gold standard – being installed. 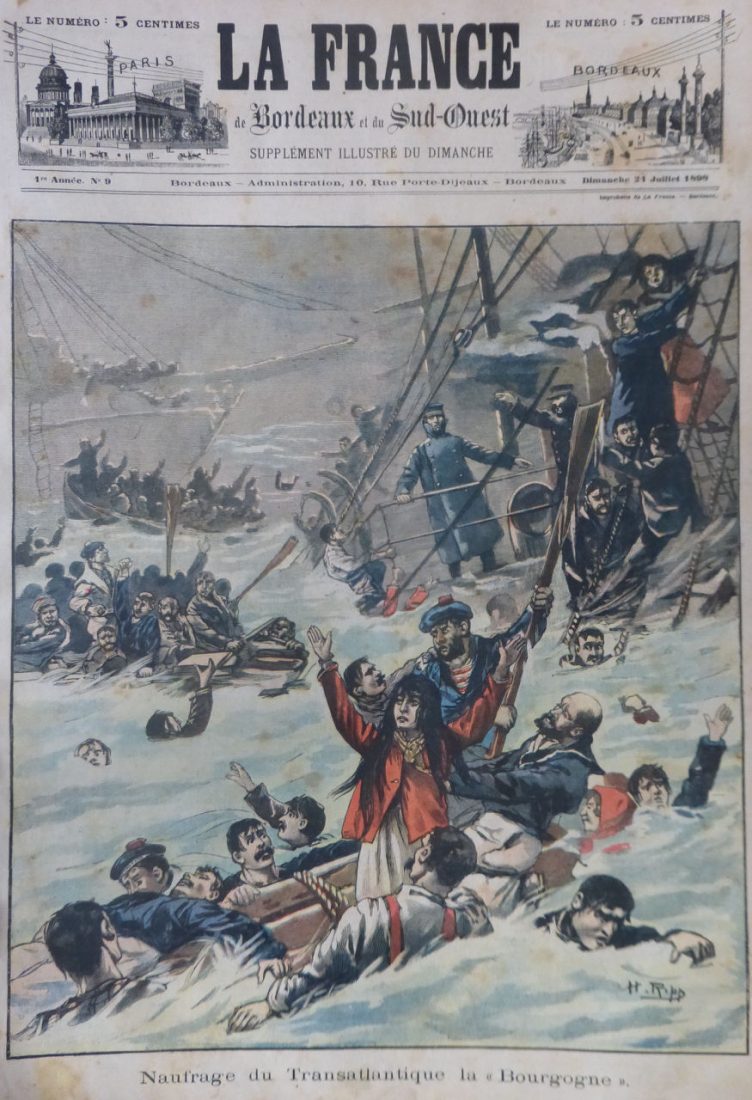 Shortly after re-entering service, on July 4th 1898, La Bourgogne ran into thick fog some hundred miles south of Nova Scotia at five in the morning. Also enveloped in the fog was the 1550-ton, 245-ft iron-hulled sailing vessel Cromartyshire. She was sounding her fog horn when a ship’s whistle announced the presence of another vessel close by – La Bourgogne. The Cromartyshire’s captain was unable to determine the location of the other ship until La Bourgogne’s starboard side loomed before him. There was no time for evasive action and the sailing vessel gouged into the liner’s side amidships, where many of the passengers were accommodated. La Bourgogne began to list immediately to starboard. Many of the lifeboats on that side had been wrecked in the collision and the boats on the port side proved impossible to launch due to the list.

Even in this situation a disciplined response might have saved lives but La Bourgogne’s crew panicked and behaved as badly as that of the Ailsa had done two years before. Showing little concern for the passengers, they rushed for the undamaged boats and launched them. In the middle of this chaos, the Cromartyshire, damaged but not fatally, mistook alarm whistles and rockets from the again unseen La Bourgogne as an offer for assistance. Only as the fog thinned, and as the liner sank a half-hour later, was the actual nature of the disaster understood and the Cromartyshire began to pick up survivors from boats and improvised rafts. 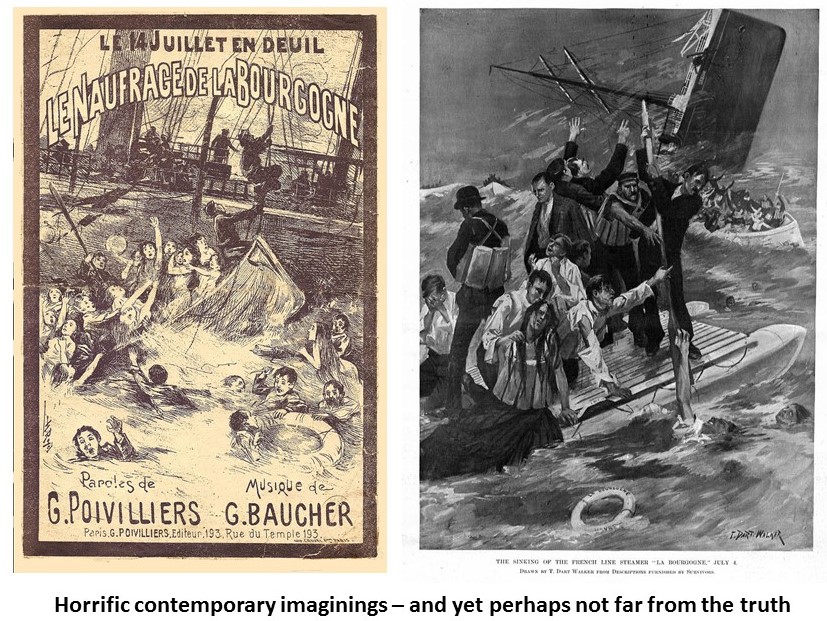 The death toll told its own story. Of 506 passengers on board La Bourgogne only 70 were rescued, as compared with 103 members of the crew out of a total of 220. Only three of the La Bourgogne’s eighteen officers survived, indicating that they at least had remained faithful to their responsibilities. Most telling of all is that only one woman survived and none of the children on board. Later reports, which may or may not have been true, indicated that crew members had stabbed passengers in the water, or had beaten them away with oars, to avoid the lifeboats being swamped. Public indignation was so high that La Bourgogne’s surviving crew members needed police protection when they landed at New York to save them from being lynched.

Terrible as the Titanic’s loss may have been, her crew had nothing to reproach itself with in her final agony. The same cannot be said of La Bourgogne’s and their name will live in infamy.