One of the great pleasure I found after I published my first novel was meeting other writers who were working in the Historical Fiction Genre – one that covers a vast range of epochs.  It was not only a welcoming community, but one that offered much mutual support and advice. Many warm friendships resulted – I have warm memories of monthly Saturday afternoon meetings at a public house in South Kensington when we exchanged ideas and experiences.  One of those I met there was Tom Williams, who not only writes fiction set both in the Napoleonic Era and later in the 19th Century. Some of his books are being republished with new covers and one, Burke and the Bedouin (detail at end of blog) is set in Egypt at the time of Napoleon’s campaign there. I thought therefor that it would be a good time to invite Tom to provide an article on the background to the novel. Here it is!

We don’t talk much about Napoleon’s invasion of Egypt’s. In fact, when I said that I was writing a book against the background of this invasion somebody accused me of making the entire thing up because “Napoleon never invaded Egypt”.

Possibly the reason why we tend to blank this campaign from history is that it doesn’t fit our ideas about Napoleon and the Napoleonic wars.

The most obvious difference between this campaign and basically all of Napoleon’s other campaigns up until the invasion of Russia is that it was a failure. The invasion itself was very well-planned. The invasion fleet sailed from three different ports, avoiding Nelson’s fleet, which was patrolling the Mediterranean, and arriving in Egypt before anybody was even sure that the French intended to invade there at all. They landed just outside Alexandria and, despite some harassing raids by local Bedouin the whole army was embarked in good order and Alexandria fell without any significant fight. Napoleon marched south, overwhelmingly defeated the Egyptian forces and occupied Cairo.

While Napoleon was dealing with the land war so efficiently, he seems to have forgotten all about the fleet that had brought him over to Egypt and which he would be relying on for communication with France. It lay at anchor in a bay near the mouth of the Nile. Its position meant that it could easily be trapped by any naval force in the Mediterranean. Nelson duly obliged and the resulting Battle of the Nile (though forgotten in recent decades) was one of his greatest victories. 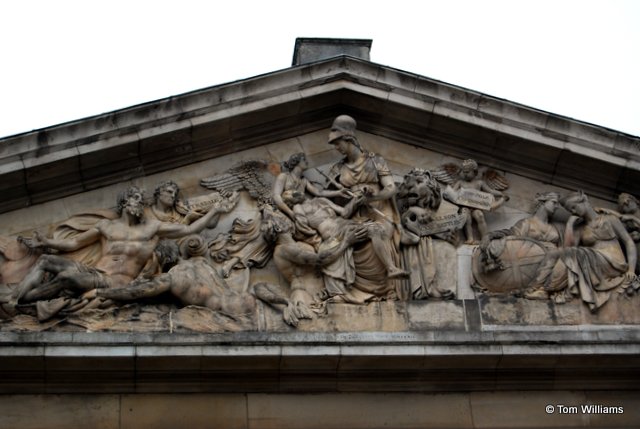 A Memorial Arch to Nelson at Greenwich Hospital 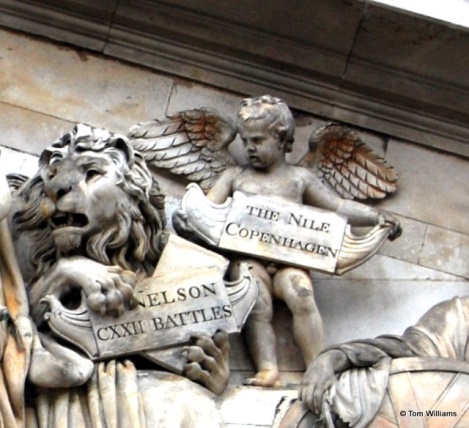 Detail from Arch, showing ‘The Nile’

Cut off from supplies and reinforcements, the French army found itself trapped in Egypt. Napoleon tried to fight his way back to Europe through Palestine but, after victory at Jaffa, he was unable to take Acre and was forced to retreat back to Egypt. With no prospect of further military success without reinforcements, Napoleon abandoned his army in 1799 and made off back to France to pursue his own career. Some of the senior officers he left behind never forgave him. Kleber, the general left in command once he had gone, said, “That bugger has deserted us with his breeches full of s–.“

This Gillray cartoon shows Napoleon as ‘the Deserter of the Army of Egypt’.

It is difficult even to be sure what Napoleon was doing in Egypt in the first place. It has been suggested that one reason for sending him to Egypt was simply to keep a long way out of France. The leadership of France at the time (the Directory) saw Napoleon as a political threat. (They were right to do so. On his return from Egypt he led the coup that brought them down.)

An alternative view is that Napoleon was there to put pressure on the British by threatening India. The notion is not as mad as it sounds: when Britain finally moved into Egypt in 1801 Indian troops joined the occupation and if troops could reasonably be sent in one direction, they could presumably have moved in the other. Napoleon even considered the possibility of digging a canal to make it easier to move troops from the Mediterranean towards India. Engineers started some trial excavations very close to what was later to become the course of the Suez Canal.

If the expedition wasn’t the first step in an attack on Britain’s Indian possessions, what was the point of it? Egypt possessed no great natural resources and no real military significance. So unimportant was it seen, that even once Napoleon had abandoned his troops it took two years for the Allied forces to reoccupy the country. So what did Egypt offer the French conquerors?

The answer seems to be that the expedition was seen almost as much as a scientific enterprise as a military one. The French had long been fascinated by Egyptian antiquities and Napoleon took with him a Commission of Arts and Scientists, known as the savants. The commission included architects, artists, composers, astronomers, botanists, scientists, surgeons, printers, naval engineers, geographical engineers, cartographers, economists, mechanical engineers, mineralogists, Orientalists and antiquarians, pharmacists and zoologists. There was a total of 167 of these savants, who brought with them their own assistants and administrators. 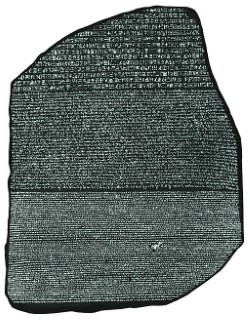 The expedition may have been militarily a disaster, but the academic side was startlingly successful. It was the French who discovered the Rosetta Stone, (see on left)which fell into British hands on their defeat. It was moved to teh British museum, where it can now be seen, and itproved to be the key to understanding Egyptian hieroglyphics.

In fact, despite the French defeat, the wealth of information that came back about Egypt inspired an enthusiasm for Egyptology and things Egyptian and had a marked cultural effect in the early 19th century both in France and, to a lesser extent, the rest of Europe. Napoleon, for example,  commissioned an Egyptian-themed porcelain dinner service as a divorce gift for his first wife, Josephine. She rejected it (on the grounds of late delivery) and, ironically, it ended up being given to the Duke of Wellington and it is now on display at his London home, Apsley House.

A faraway country of which we know little 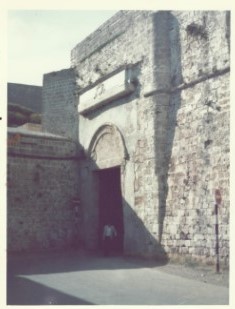 Another reason for the little awareness of the Egyptian campaign is that people aren’t that familiar with the geography. It’s easy enough to say that Napoleon landed near Alexandra and marched on Cairo. But then he tried to retreat through Lebanon. This involved marching his army through the Sinai desert. Napoleon’s secretary, Bourrienne, noted that: “The exhaustion of the desert and the lack of water provoked violent murmurings amongst the soldiers.” He fought his way up to Jaffa, which fell, despite the plague by then sweeping through his army. Then he carried on to Acre where the solid fortifications (and assistance provided from the sea by the British) meant that he was unable to take the city and was forced to turn back. The city gate at Acre, seen on the right, is still impressive today.

The entire expedition was a huge military undertaking, but without an understanding of the distances and terrain involved it’s difficult to get excited about it. 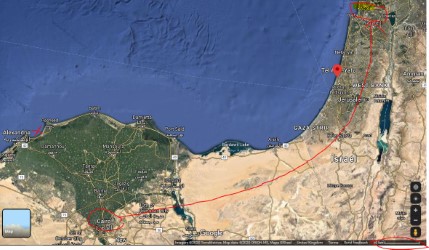 In the image above (courtesy of Google, of course) note the scale (50km) bottom right. The cross marks the site of the Battle of the Nile. (It’s not that close to the Nile, but PR mattered even at the end of the 18th century. The Battle of the Pyramids wasn’t actually fought at the pyramids either.) The red line shows A-B, the actual route taken was along the coast. Israel nowadays is, of course, greener than it was then.

In summary, this expedition is Napoleon’s forgotten failure. Nobody is quite sure what the French were doing there and most people struggle to come to terms with the geography of the campaign. And, of course, the French tend to downplay it with their characteristic modesty about their defeats.

It’s still a fascinating campaign though and the inspiration behind my book, Burke and the Bedouin which is a modern spy story set against this 18th century background. James Burke was a real person: his adventures here are fictional – but the military and political background is not fictional at all. Neither is the Battle of the Nile which features prominently. It was a great British victory and it deserves to be remembered for more than the boy who stood on the burning deck of the French flagship L’Orient –  he was a real person and a tragic casualty of the war. 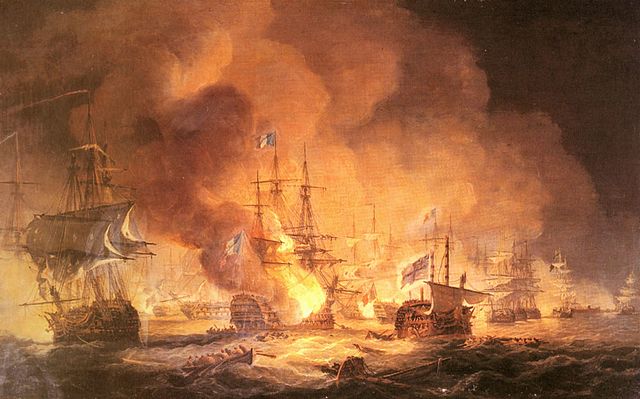 Tom Williams used to write about business but he’s given that up to indulge himself and write historical novels. His three existing books about James Burke are being republished ahead of the publication of two new ones later this year. The latest to come out with a shiny new cover is Burke and the Bedouin (Click here or on cover image for details)

You can read more about the world of James Burke (and Tom’s other books set in the mid-19th century) on his web-site: https://tomwilliamsauthor.co.uk. There’s a blog on it as well.

An excellent summary of the campaign is provided in Paul Strathern’s Napoleon in Egypt.

Many contemporary works, both in English and in French are readily available. Thanks to the wonders of the internet most can easily be accessed for free. I enjoyed Life and Campaigns of Napoleon Bonaparte … by M. A. Arnault and C. L. K.  Panckoucke, The History of Napoleon Buonaparte by J. G. Lockhart, Narrative of the French Expedition to Egypt by M. J. Miot, and Scott’s Life of Napoleon Buonaparte.

The Gillray cartoon features on the Age of Revolution website which includes an interesting discussion of it: https://ageofrevolution.org/200-object/napoleons-departure-egypt-23rd-march-1799/