On 4th August 1914 Germany rejected the British ultimatum to withdraw from neutral Belgium, which had been invaded in the preceding days. From 2300 hrs that evening both countries were at war.  Britain’s Royal Navy was already on a war footing and sweeps of the North Sea were already underway. The Imperial German Navy was not idle either and action was immediately undertaken to sow mines in British waters. The success of mining in the 1904-05 Russo-Japanese War had demonstrated the effectiveness of such measures.

One is however surprised that dedicated minelayers had not already been constructed and commissioned by Germany. A hasty conversion was however undertaken of the 2000 ton, 20-knot Königin Luise of the Hamburg-Amerika company, an excursion vessel which had been in service for just one year carrying tourists between Hamburg and the island of Heligoland. Though plans were apparently in place to arm the Königin Luise with two 3.5-inch guns, there was no time for this as she was impressed for service on 3rd August and rushed into service in her new role. By the time of declaration of war on 4th August, she was rushing towards the Thames estuary with 180 mines on board. 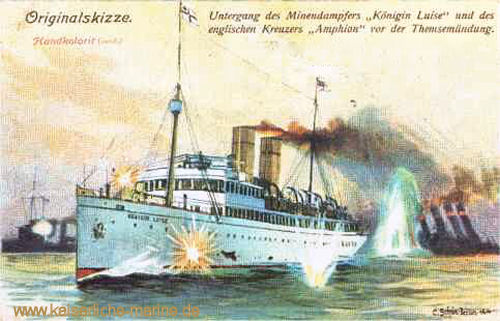 Unknown to the Königin Luise, her course was heading her towards a patrol of the Royal Navy’s newly created Harwich Force, entrusted with patrolling the Southern North Sea and protecting trade-routes between Britain and the Netherlands. The patrol consisted of four L-Class destroyers, led by the scout cruiser HMS Amphion. Commissioned in 1913, the 3340-ton HMS Amphion was 405 feet long and her 18000 HP drove her at a maximum of 25 knots of four shafts. Designed primarily as a leader for destroyer flotillas, she carried negligible armour and her armament of ten singly-mounted  4-inch guns – supplemented by two submerged 18-inch (450 mm) torpedo tubes – must have made fire control difficult in the extreme. 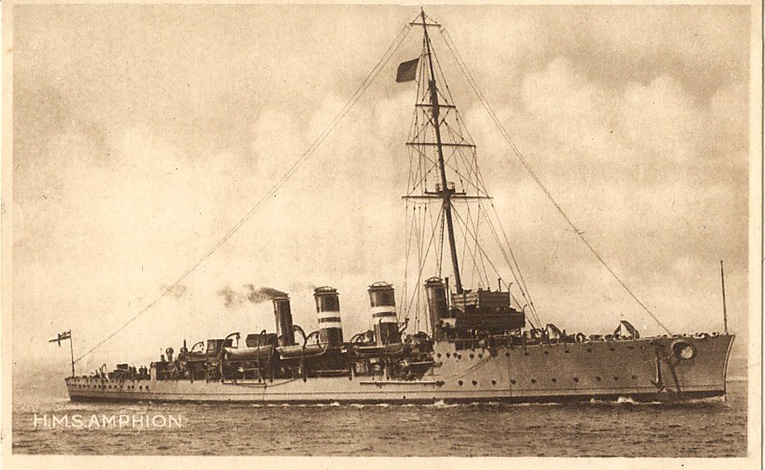 At 0900 hrs on 5th August HMS Amphion’s group encountered a trawler which reported seeing a suspicious steamer “throwing things overboard”. The trawler’s skipper described her position as nearly as he could and HMS Amphion headed towards it, subsequently sighting what proved to be Königin Luise, still in buff, black and yellow peacetime commercial colours. The German vessel turned and ran for home and a 30-mile chase followed before one of the British destroyers, HMS Lance, could open fire at 4400 yards with her 4-inch guns. Her first round was the first British shot of World War I and the responsible weapon from HMS Lance is on now display at London’s Imperial War museum. HMS Amphion now entered the fray and her fire doomed the Königin Luise. With her stern badly damaged she began to sink, going down around noon. Every attempt was made by the British vessels to rescue 75 German survivors from the water out of a total crew of some 100. 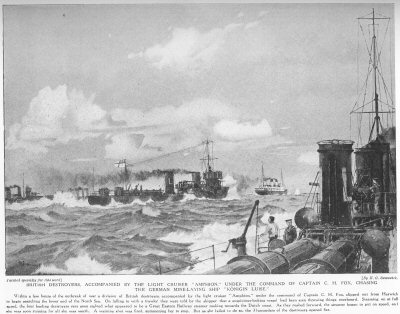 A contemporary magazine’s impression of the chase, as seen from British destroyers

HMS Amphion and her destroyers now continued on their assigned task to sweep the waters north of the Dutch Friesan Islands, reaching there at 2100 hrs – dusk in this area. No further German forces were encountered and Captain Cecil H. Fox of HMS Amphion was now faced with the dilemma of what course to set for Harwich, having only minimal information as to the exact location in which Königin Luise had laid her mines. His decision to steer through an area some seven miles west of where he thought the mines were brought his force directly into the danger area. At 0635 hrs on 6th August HMS Amphion struck a mine. Detonating beneath the bridge, the effect was catastrophic, breaking the cruiser’s back and setting her forward section on fire. 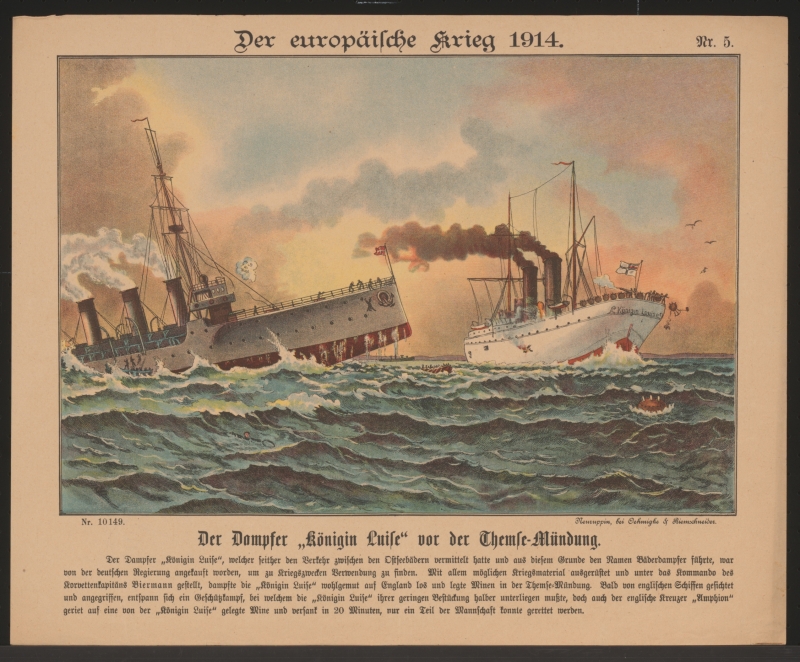 German view of sinking of HMS Amphion – with the Königin Luise escaping on the right. In actuality the latter had been sunk some eighteen hours previously.

The destroyer HMS Linnet tried to take HMS Amphion in tow but by now she was hogging so badly, and threatening to break in two, that there was no option but to abandon her. The forward magazine now exploded, rupturing the hull and throwing one entire 4-in gun mounting past HMS Linnet. A shell hurled by the explosion landed on the destroyer HMS Lark, killing two of her crew and the single German prisoner whom they had earlier plucked from the water. HMS Amphion sank soon after – with a loss of 132 of her crew and an unspecified number of German prisoners. One of the survivors was her first-lieutenant, John Tovey, who in World War 2 was to be Commander-in-Chief of the Royal Navy’s Home Fleet and the mastermind of the destruction of the Bismarck. His subsequent responsibility – a most appropriate one in view of his experience on Amphion – was for controlling the east-coast convoys and organising minesweeping operations.

By midday on August 6th 1914, some forty-eight hours of declaration of war, bodies and wreckage strewed the North Sea and both Britain and Germany had drawn first blood at sea in the murderous conflict that was to follow.