Devotees of naval history and fiction will know that the “74”, the so-called Third- Rate ships of the line, were the backbone of the fleets of the major European powers in the period 1756-1815. Though the type is primarily thought of as British, the original concept, dating from the 1740s, was French. 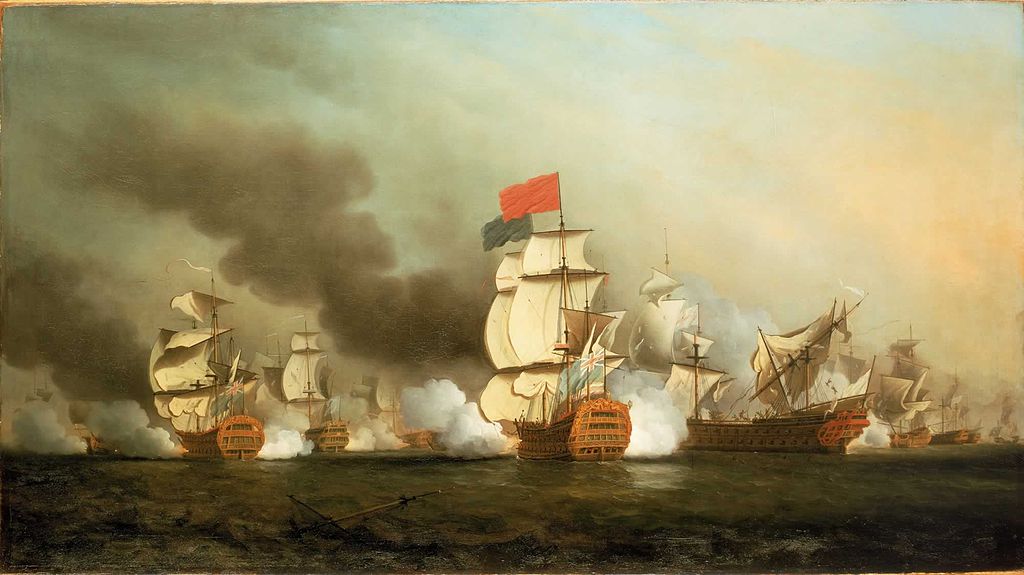 The Royal Navy captured a number of the early French 74-gun ships during the War of the Austrian Succession (1740-48) and was greatly impressed by them compared to their own smallish 70-gun ships. Britain thereafter began to construct its own 74s. The balance of fire-power, sailing qualities, habitability, ability to absorb punishment, plus the endurance that a large store-capacity brought with size, suited the 74 not just to service in the battle line but also for blockade duty and for independent missions on distant stations. As such they were of particular value to the British and French navies, and to a somewhat lesser extent to the Spanish, in view of the global reach of their ambitions. The Russian, Dutch and Danish navies were also to build 74s and the type was to figure in every major action of the period.

The most notable characteristic of the 74 was that it carried its guns on two decks, compared with the three decks of First and Second Rate ships, of which there were far fewer, and which usually served as Admiral’s flagships. HMS Bellona, launched in 1760, was essentially the prototype of the Royal Navy’s 74s and her vital statistics were not significantly departed from in more than 40 generally similar ships which followed. These were: 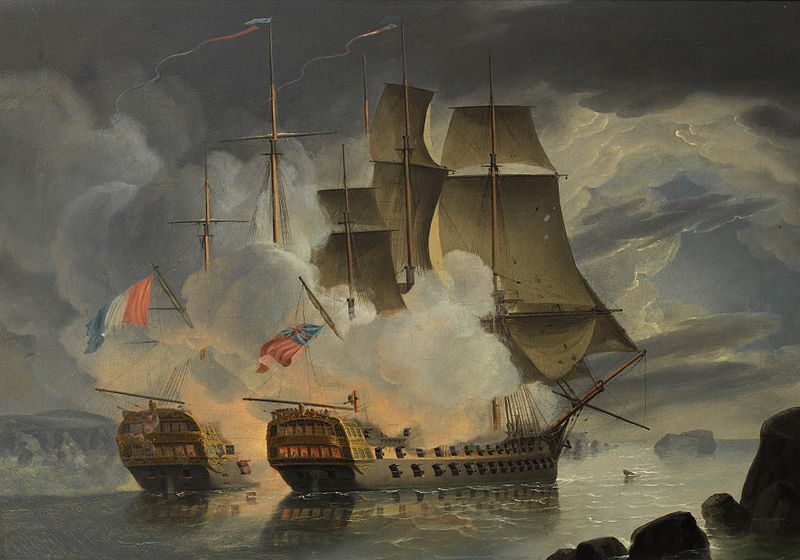 Two 74s slugging it out off Brest 21st April 1798
The French Hercule (l) and the British HMS Mars. The Hercule was captured.

When HMS Bellona was commissioned, the Seven Years War – which can be fairly described as “The First World War” since it was fought on a global scale – was already in progress for four years. Her first duty was one that was to become monotonously familiar to herself and to her sisters in the next five and a half decades – blockade of the French coast. Her first blooding – most appropriately since she was carried the name of the Roman Goddess of War – was however to occur off the western coast of Portugal and Spain in 1761. There, off the port of Vigo, Northern Spain, on August 13th, and in company with the 36-gun frigate HMS Brilliant, she was to encounter a close counterpart, the French 74 Courageux. The latter was in company with two frigates, Malicieuse and Ermine. The latter were 36-gun vessels, very similar to HMS Brilliant. 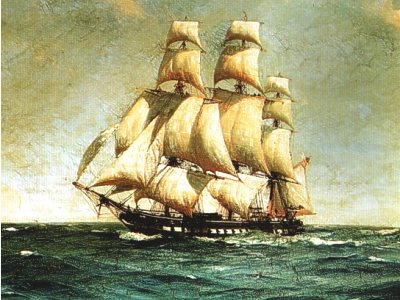 In view of the French having the numerical advantage it is surprising that the greater aggression was shown by the British. Captain Loggie of HMS Brilliant concentrated on drawing off the two enemy frigates so that Captain Faulkner, of HMS Bellona, could concentrate on the Courageux alone. Throughout the following engagement, HMS  Brilliant withstood the united attacks of both French frigates, until they at last sheered off, both seriously damaged.

HMS Bellona and Courageux were meanwhile involved in a classic single-ship action. They had closed very fast and the Courageux fired her first broadside when she reached musket-shot range. Faulkner, on HMS Bellona, kept his nerve – and his fire – however, ordering his gun-crews not to fire till they saw the whites of the Frenchmen’s eyes, adding, “Take my word for it, they will never stand the singeing of their whiskers!” Whether or the speech recorded in an admiring Victorian history was ever actually delivered by Faulkner it was however an excellent summary of what he intended to do – and did:

“I propose to lead you close on the enemy’s larboard quarter, when we will discharge two broadsides, and then back astern, and range upon the other quarter, and so tell your guns as you pass. I recommend you at all times to point chiefly at the quarters, with your guns slanting fore and aft; this is the principal part of a ship. If you kill the officers, break the rudder, and snap the braces, she is yours, of course; but, for this reason, I desire you may only fire one round of shot and grape above, and two rounds, shot only, below. Take care and send them home with exactness. This is a rich ship; they will render you, in return, their weight in gold.” 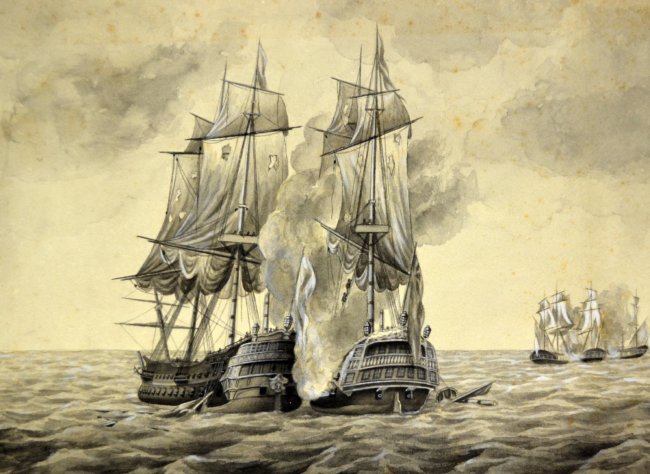 The plan was carried out to the letter and almost every shot took effect. The French returned a very brisk fire, and within nine minutes of the action commencing HMS Bellona’s shrouds and rigging were almost all cut to pieces and the mizzen-mast had fallen over the stern. Faulkner managed nonetheless to wear his ship round; the officers and men flew to their respective opposite guns, and carried on, from the larboard side, a fire even more effective than they had hitherto kept up from the starboard guns. The French colours were hauled down little over ten minutes later.

Faulkner ordered HMS Bellona to cease firing as soon as the Courageux struck her colours. Many of the British crew had come on deck, congratulating each other on their victory – and, no doubt, on their prize money – when gunfire erupted, perhaps accidentally, from the Courageux’s lower gun-deck. Fury now overtook HMS Bellona’s crew and, without waiting for orders, they rushed back to their guns. Two full broadsides were poured into the French vessel before quarter was called for. By the time firing ceased the Courageux was virtually a wreck. Only her foremast and bowsprit still stood, several of gun-ports had been knocked into one, and she had suffered 240 killed and 110 wounded. The Bellona, by contrast, had only six dead and twenty-eight wounded.  HMS Brilliant which, while outnumbered, had put two similar frigates to flight, had five men killed and 16 wounded.

The Courageux was brought to Lisbon (the Portuguese were Britain’s allies) and after repair was taken into the Royal Navy as HMS Courageux.  She was to serve for three decades until she was wrecked off Gibraltar in 1791. Her French captain, Dugue L’Ambert, had been wounded in the neck at the start of the action. He died, at Lisbon and it is pleasing to record that his funeral was attended by HMS Bellona’s officers and the surviving officers of the Courageux.

HMS Bellona was to serve until 1814, and to play honourable roles in numerous actions, including the Battle of Copenhagen in 1801. It was however the Courageux action for which she is most remembered. By it she had established a British reputation for almost unvarying victory in single-ship actions which was to last until the encounters with the United States Navy from 1812 onwards. But that’s a another story!