Skip to content
Life at sea in the Royal Navy, late 1860s 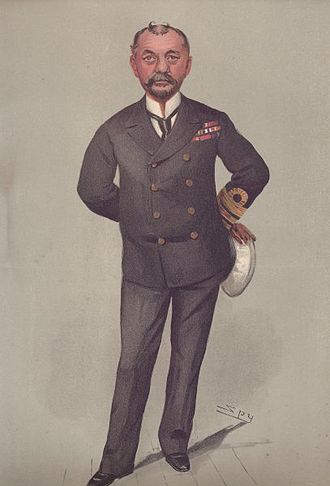 I’ve recently been dipping again into the memoirs of Admiral Sir Percy Scott (1853 -1924), one of the key figures in the modernisation of the Royal Navy in the late 19th and early 20th Century. Scott transformed the discipline of Gunnery, including improvements in accuracy and development of fire control. Though retired before World War I, he was called back to service by Admiral Lord Fisher and Winston Churchill. A talented engineer (who became wealthy through royalties for his inventions), Scott’s interests, besides naval gunnery, also included development of anti-aircraft guns, anti-submarine warfare and the employment of aircraft. He was one of the first to recognise that air-power had made battleships all but obsolete. A difficult and combative personality, who challenged established and conservative thinking, he managed to rise in the navy nonetheless on the basis of sheer excellence and pragmatism of his ideas. Given that he would build his career on mastery of new technology, it’s fascinating how his early days were spent in a mainly sailing navy that still carried much over from the Age of Fighting Sail. His memoirs provide fascinating insights to this.

Scott recounts that “on 25th August, 1868, I went to my first real seagoing ship, the Forte, a 50-gun frigate of 2,364 tons. She had engines, but of such small horsepower that they were only serviceable in a flat calm.”

HMS Topaze, of the same size, armament and vintage as HMS Forte

For all practical purposes, HMS Forte was little different to frigates that had gone into action a half-century earlier in the Napoleonic Wars. The realities of handling a ship under sail, the daily routines, the food – and the enforcement of discipline – were little different either. This is borne out by Scott’s recollection of life on board, beginning with the first days of Forte’s deployment, while she was still in the English Channel. Scott took this in his stride: “We started from Sheerness, and en route to Portsmouth we youngsters were fortunately introduced under sail to a gale of wind. Four hours on deck, close-reefing the topsails and clearing away broken spars, probably cured every one of sea-sickness for the remainder of their lives at any rate, it cured me. An excitement of this sort is, I believe, the only cure for sea-sickness.”

Arrival at the anchorage of Spithead, off Portsmouth, brought its own excitement since “we midshipmen were delighted at being turned out in the middle of the night for a collision. Colliding with or being rammed by another ship, or ramming another ship, is a necessary part of an officer’s education. In this case the barque Blanche Maria had got across our bows, at the change of the tide. There was a lot of crunching, but eventually we got clear without much damage. The Blanche Maria said that we had given her a foul berth; we declared she had dragged her anchor. However that may be, we midshipmen were all delighted at having seen a collision.” 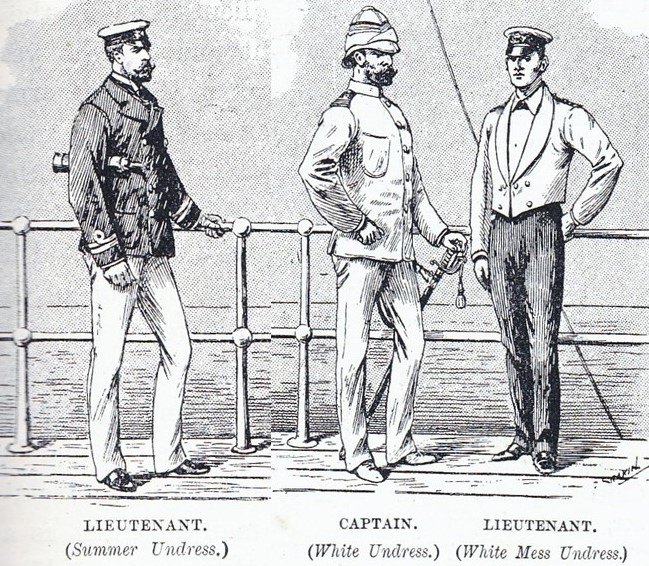 Naval uniforms were in transition in the late 1860s, HMS Forte’s officers were unlikely to as  shown in this late-Victorian illustration

Soon after, HMS Forte left to make a three-month sailing passage to Bombay, via the Cape of Good Hope. Scott remembered that “In those old sailing days in fine weather it was very delightful; a man-of-war was a gigantic yacht, scrupulously clean, for we were seldom under steam and as a consequence did not often coal”.  This did however bring a major disadvantage: “Shortage of water for the purpose of washing was our great inconvenience; our Commander (i.e. First Lieutenant adb Executive Officer), either for economy or to save the dirt of coaling, made a great fuss about the coal used for condensing. Consequently, we were very often short of water for washing; water for drinking was not limited. On the main deck there was a tank with a tin cup chained to it, so that anyone could get a drink. But there was a little waste, as the men did not always drain the cup dry. In order to check this, the Commander introduced what was called a ” suck-tap”; the tap and the cup were done away with and a pipe placed in lieu of these, and anyone wanting a drink had to take the nasty lead pipe into his mouth and suck the water up; it was a beastly idea, which our new Commander immediately did away with.” 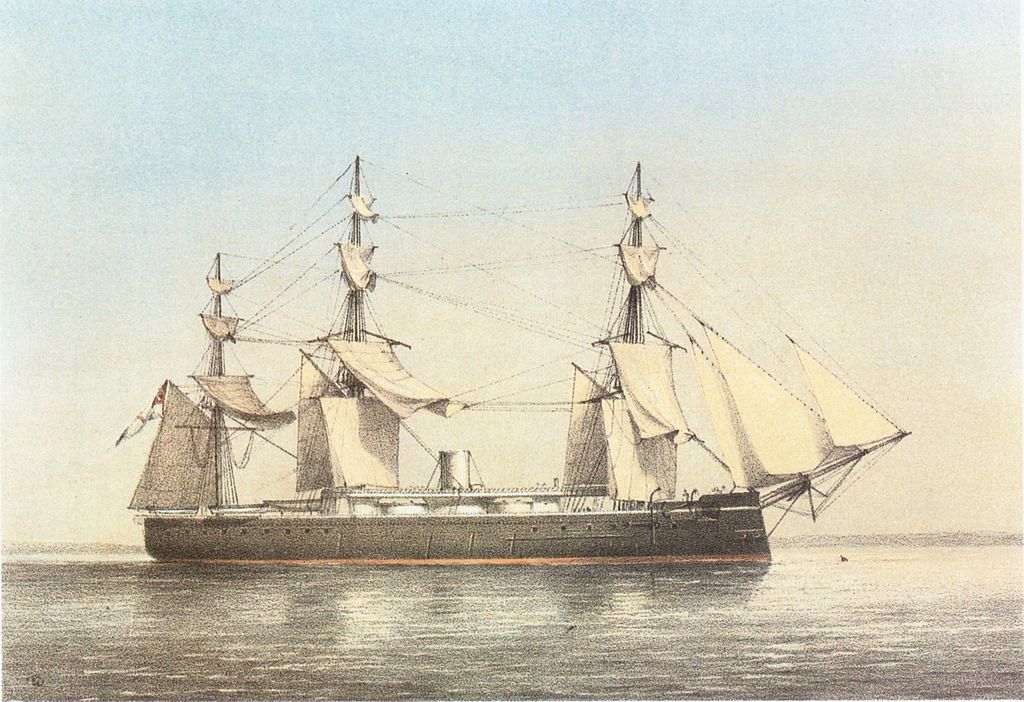 By the late 1860s the ironclad had arrived, with heavier reliance than hitherto on steam, but still carrying sailing rigs. Here’s HMS Monarch of 1868. Painting by Frederick Charles Mitchell (1845 – 1914)

Scott recalled with affection that “In the evening the men always sang, and it was very fine to hear a chorus of about 800 men and boys, many of the latter with unbroken voices. We had one young man who used to sing “A che’ la morte” and other tenor songs from Verdi’s operas, as well as many singers that I have heard on the stage”. He did note however that “the songs, however, were not always of this high class” and that “the men’s songs, and their parlance, was sometimes strong. Many of their comparisons and similes were often witty and quite original.” What was meant by “strong” is probably best left to the imagination.

Writing as he was in 1919, Scott had little sympathy about civilians’ complaints about food rationing during World War I, noting that “some people seemed to think that milk, butter, cheese and vegetables were necessities of life.”  He contrasted this with his service on his first ship, “where there were about 750 men and boys in the perfection of health and strength. Their rations at sea consisted of salt beef, salt pork, pea soup, tea, cocoa and biscuit, the last named generally full of insects called weevils.”  Except for the addition of tea and cocoa, this was little different to the diet of seamen in Nelson’s day. 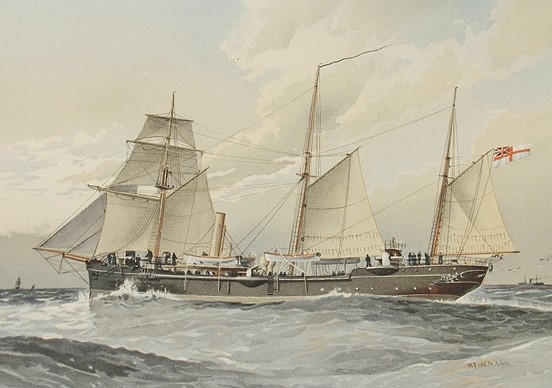 Into the 1890s, sail remained important for smaller vessels operating on distant stations where coal was not widely available. Here’s Mitchell’s view of gunboat HMS Thrush (1889)

During HMS Forte’s voyage to India, her captain, John Hobhouse Alexander, earned Scott’s respect as “a magnificent seaman”.  The ship’s commander (first lieutenant) was a different matter and “We midshipmen had a terrible time with him. I contradicted him once, and as I happened to be right, he never forgave me.” The penalty was the same as many young gentlemen were subjected to in Nelson’s day: “I saw more of the masthead than I did of the gun-room mess. Sending a boy to sit up at the masthead on the cross-trees was a funny kind of punishment. In fine weather with a book it was rather pleasant; in bad weather you took up a waterproof.”  There were more brutal penalties for men on the lower deck “Masthead for the midshipmen, and the cat for the men, was the Commander’s motto. I saw one man receive four dozen strokes of the cat on Monday and three dozen on Saturday, and he took them without a murmur.” Scott wrote in admiration: “That is the spirit which made this a great country; we love men who take punishment without flinching. This particular Commander revelled in flogging, and the sight of it seemed to be the only thing that gave him any pleasure. It was a form of self-indulgence which finally led to his ruin.” 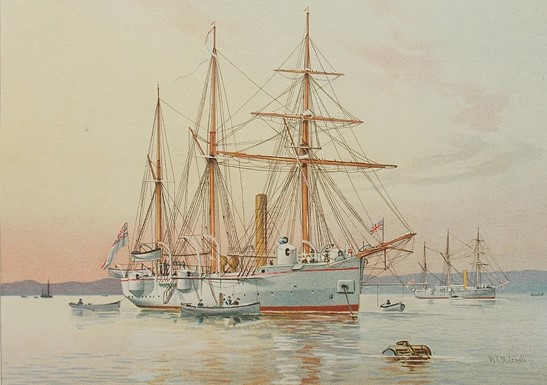 HMS Bramble (1886), another gunboat operating into the 1890s, as painted by Mitchell

This un-named commander’s“ruin” was brought about after Captain Alexander went home after arrival at Bombay. “We became the Senior Officer’s ship on the East Indies Station, and flew the broad pennant of Commodore Sir Leopold Heath, K.C.B. He was a clever, kind and able seaman. He made me his A.D.C., an honour which I appreciated but which got me into further trouble with the Commander, as he did not approve of it.  I had more leave stopped than ever and was continually under punishment.” Deliverance came when the Commodore was “up country” (possibly on a social visit or hunitng trip) in Ceylon, now Sri Lanka. The commander was now in temporary control of the ship. “An able seaman refused one morning to obey an order. The case was investigated by the commander, and at one o’clock two hours later the offender received four dozen lashes. On the Commodore’s return the man laid his case before him, and complained that the King’s Regulations, which order commanding officers not to inflict corporal punishment until twenty-four hours after the offence, had not been observed.”  The consequences for the commander were serious: he “was tried by court-martial and dismissed the ship.” Given that flogging was finally abolished in the Navy in 1879, and that its use was already uncommon, this may have been one of the last occasions it was employed.

Soon after this incident, Scott’s vessel was to be involved in Slave Trade suppression off the coasts of East Africa and Arabia. We’ll return to this in a later blog.

Another young officer at sea in the 1860s: