The families left behind by the merchant seamen of the 1870s

A separate article, about working conditions in merchant shipping in the 1870s (Click here to read it), refers to the work done by the great maritime reformer Samuel Plimsoll (1824-1898) who worked tirelessly to combat the practices of over-insuring decrepit ships that were likely to founder – taking their crews with them – and of overloading ships far beyond their safe draughts. His name lives on in “The Plimsoll Line” – the marking on ships’ hulls that marks the deepest loading allowed for the vessel in various conditions. In 1867, Plimsoll advanced his cause by getting elected as the Liberal Member of Parliament but his efforts to get a law passed on safe loading were frustrated by the larger number of ship-owners who were also members. 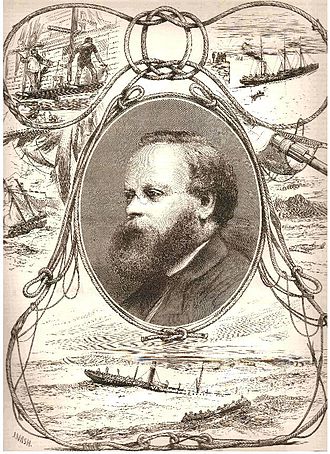 Plimsoll’s crusade, inside and outside the British Parliament, was heavily dependent on amassing a vast amount of evidence, much of it gained through interviews with offices and sailors. He also interviewed seamen’s families in harbour-towns – who were only too often reduced to the status of widows and orphans. This provided a basis for a book entitled “Our Seamen”, which he published in 1872. It evoked much outrage in the wider public and gained support eventually for the legislation Plimsoll had demanded. His meetings with bereaved relatives provide particularly poignant insights to the lives of the poor in the 1870s. Below are summaries of some such interactions.

In a particularly moving example Plimsoll tells of a 23-year old widow, with children, who is keeping alive by mangling clothes (i.e. squeezing the water from items that have just been washed). The mangle, a rolling device worked by a crank, was bought for her by her neighbours. Plimsoll remarked that “the poor are very kind to each other.” Her husband was serving on a ship identified as the S—n (Severn, perhaps? Threat of legal action made direct references risky), an unseaworthy vessel which her owner insured for £3,000 more than he had paid for her. For one last voyage she was loaded under the owner’s personal superintendence, so deeply that Plimsoll claimed that the dockmaster told him that he had pointed her out to a friend as she left the dock, saying emphatically, “That ship will never reach her destination.” She did not – she was lost with all hands – twenty in total. The young widow’s husband had complained to the owner before sailing that the ship was too-deeply loaded, but without avail. 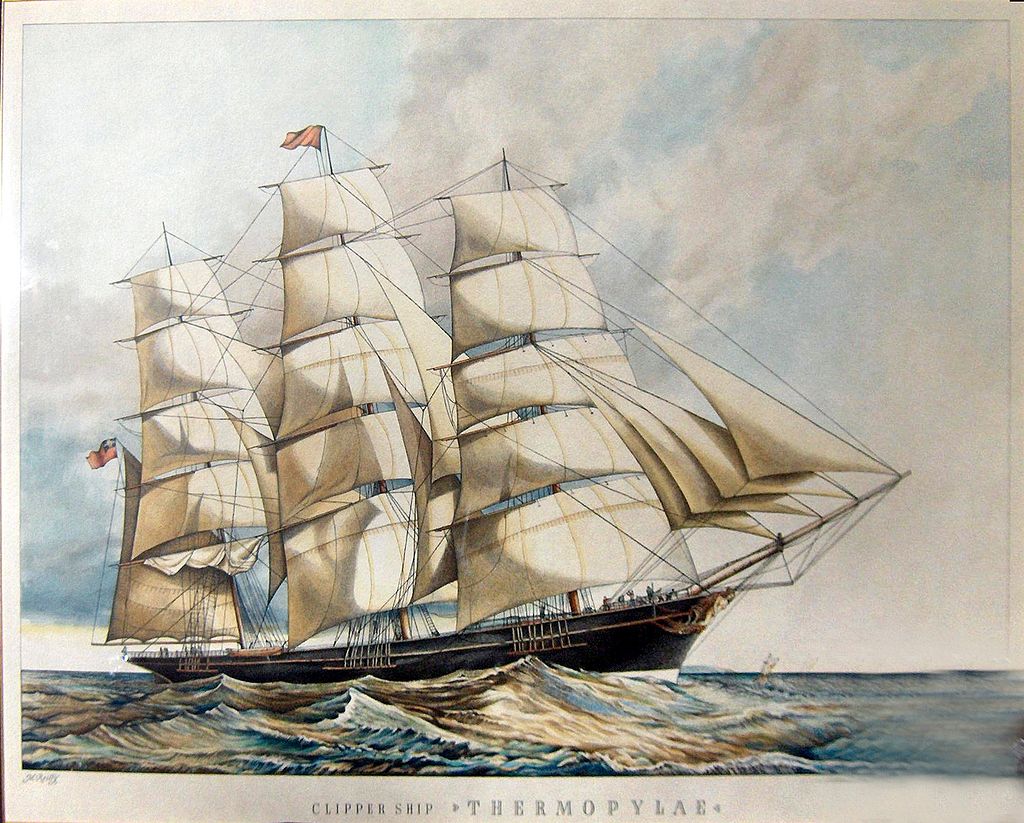 A dreadful aspect of cases like this was touched on in the previous article referred to. The law was such that once a seaman had signed on for a voyage – which on occasion poverty might force him to do without having first seen the ship itself – refusal to board could result in criminal prosecution and imprisonment with hard labour, typically for twelve weeks for each offence.  Large numbers of seamen were jailed for refusing to sail on vessels they believed to be unseaworthy or which were inadequately manned.

Plimsoll refers to another pathetic case. In “a most evil-smelling room” in a slum he found in the corner of a room “two poor women in one bed, stricken with fever (one died two days after I saw them), mother and daughter.” The daughter’s husband, the only support of both women, had been lost at sea shortly before in an overloaded ship. Plimsoll spoke to a customs officer, “a Mr.  B——l”, a customs officer who had needed to visit the ship before she departed and when asked how to identify her was told “She’s yonder; you can easily find her, she is nearly over t’head in the water” Mr. B——l told Plimsoll that “I asked no questions, but stepped on board; this description was quite sufficient.” 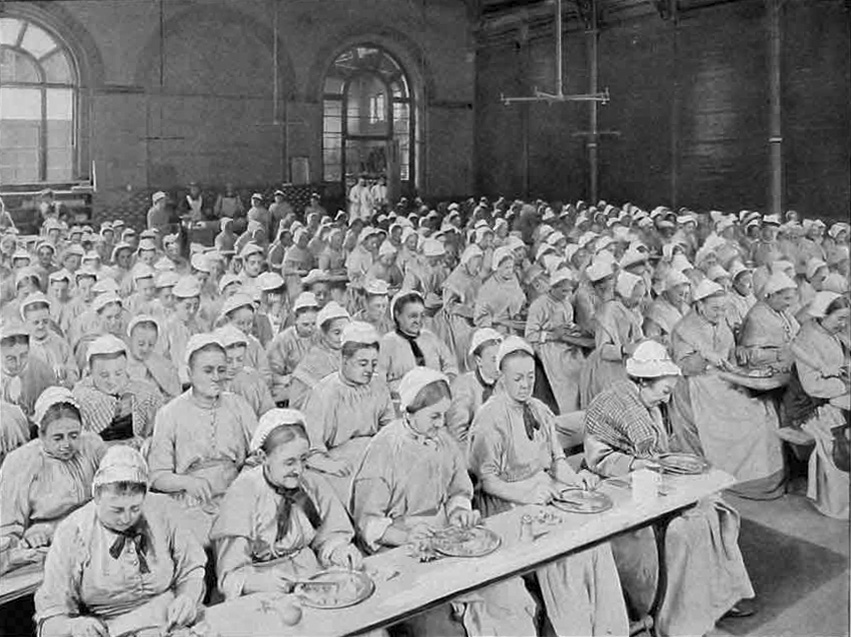 The Workhouse, last refuge of the destitute widow – this is mealtime in the St. Pancras workhouse in London

Another lady told Plimsoll that she and her younger brother were orphans and brought up by an older sister. The latter’s husband supported the brother in going to sea, and he did well enough to qualify as a Second Mate on sailing ships. He wished however to qualify in steamships and was engaged to serve in a ship that was leaking badly. He was however assured when he signed on that full repairs would be made before loading. This did not happen and according to Plimsoll he told his sister that the vessel was loaded “like a sand-barge.” Both his sister and her husband urged him not to sail and he promised that he would not. He went to the ship to get the wages due to him. Here he “was refused payment unless he went, was over-persuaded and threatened, and called a coward, which greatly excited him. He went, and two days afterwards the ship went down.” 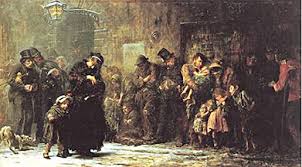 Even across fourteen decades it is impossible not to be moved – and outraged – by some of Plimsoll’s findings. His account of the simple dignity of one of these widows deserves respect. She was surviving by sewing for a ready-made clothes shopkeeper. “She was in a small garret with a sloping roof and the most modest fireplace I ever saw; just three bits of iron laid from side to side of an opening in the brickwork, and two more up the front; no chimney-piece, or jambs, or stone across the top, but just the bricks laid nearer and nearer until the courses united. So I don’t fancy she could be earning much. But with the very least money value in the place, it was as beautifully clean as I ever saw a room in my life.”

This lady’s husband had also committed to a ship that proved to have been overloaded. He came home and, according to her “got his tea without saying a word, and then sat looking into the fire in a deep study, like. I asked him what ailed him, and he said, more to himself than to me, “She’s such a beast!” I thought he meant the men’s place was dirty, as he had complained before that there was no place to wash. He liked to be clean, my husband, and always had a good wash when he came home from the workshop, when he worked ashore. So I said, “Will you let me come on board to clean it out for you?” And he said, still looking at the fire, “It ain’t that.” Well, he hadn’t signed, only agreed, so I said, “Don’t sign, Jim,” and he said he wouldn’t, and went and told the engineer he shouldn’t go.”  The engineer overcame Jim’s objections by offering ten shillings (half-a-pound sterling) per month more. He had had no work for a long time, and the money was tempting, so he signed. “When he told me I said, “You won’t go, Jim, will you?” He said, “Why, Minnie, they will put me in gaol if I don’t go.” I said, “Never mind, you can come home after that.” It turned out however that he had also been accused of cowardice and that too had played a role in his decision. It cost him his life.

Plimsoll himself was clearly moved and he told the wretched woman, who was by then crying bitterly, “I hope you won’t think I am asking all these questions from idle curiosity.” He was to remember her answer: “Oh no, sir; I am glad to answer you, for so many homes might be kept from being desolate if it was only looked into”. 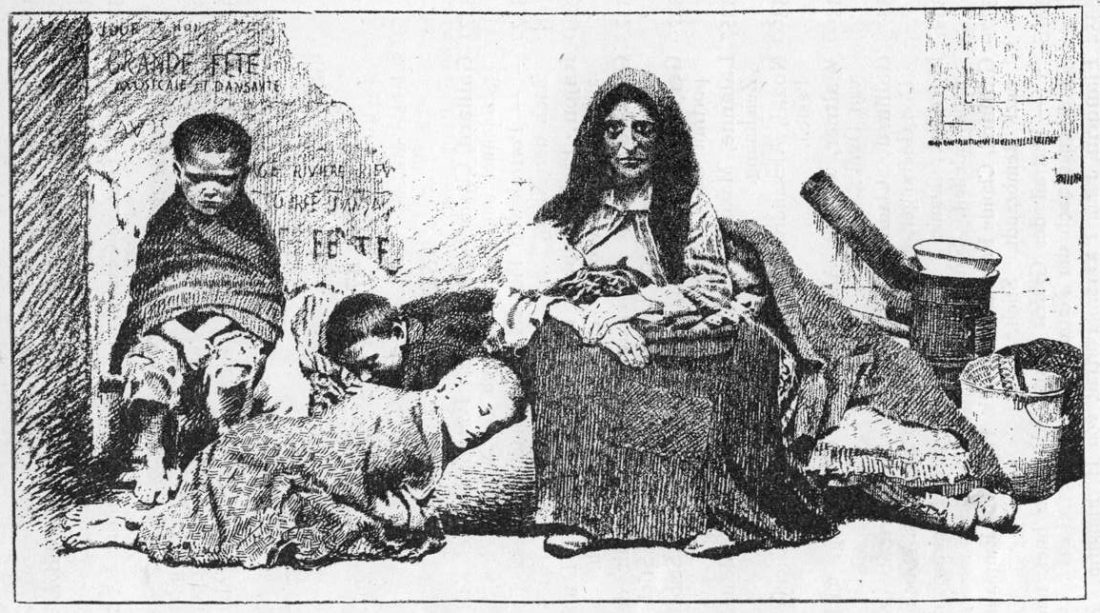 A homeless French mother on the street with her children.  Such sights were common across Europe – and they disgraced it

Another story involved a couple who had lost a son at the age of twenty-two. He had been taken on as a stoker, and worked on the ship some days before she was ready for sea. He did not want to go when he saw how she was loaded. She looked like a floating wreck, he claimed, but the owners refused to pay him the money he had earned unless he went, and so he too was lost with the crew. “Just one more specimen of the good, true, and brave men we sacrifice by our most cruel and manslaughtering neglect,” Plimsoll commented.

It is indeed too easy, at this remove, to be entranced by the “romance” of the seaborne trade of the 19th Century, with its sleek hulls and billowing clouds. We are indebted to Plimsoll not only for his load-line, and the countless lives it was to save, but to his insights into the lives of some of the most overlooked and forgotten of his era.

He was a true hero.

Click on image above for reviews and ordering details

This volume of the series involves mystery, blackmail, espionage and danger at a time when the international power balance is shifting. The secrets of cutting-edge weapons technology are highly prized – and some will stop at nothing to get them . . .

Below are the ten Dawlish Chronicles novels published to date, shown in chronological order of main action. All can be read as “stand-alones”. Click on the banner below for information on each. All are available in Paperback or Kindle format and can be read at no extra charge by Kindle Unlimited or Kindle Prime Subscribers.