The pursuit of the treasure ship Glorioso 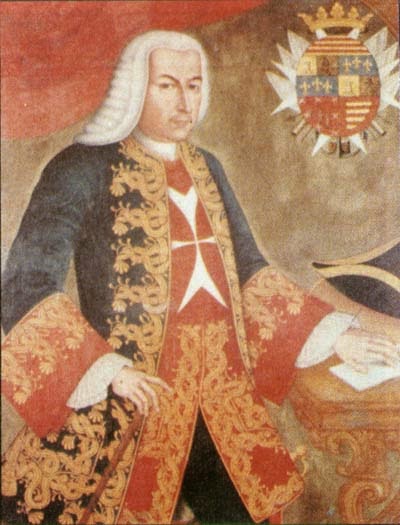 In 1747, at the height of the War of Austrian Succession, when Britain was (once more) at war with France and Spain, the departure of a Spanish warship from the Americas was to trigger a series of brutal naval engagements reminiscent of the pursuit of the Bismarck, two centuries later. The 70-gun ship-of-the-line Glorioso was carrying four-million silver dollars and as such was a prize well worth the taking. She was to be engaged both by the Royal Navy and by British privateers and it is the performance of the flotilla of the latter, nicknamed “The Royal Family”, which was the most remarkable.

The Glorioso’s first encounter with the enemy was off the Azores on July 25th when she encountered a British convoy of seven merchantmen, escorted by three Royal Navy vessels. The largest was HMS Warwick – a 60-gun ship comparable to the Glorioso, HMS Lark, a 40-gun frigate, and a 20-gun brig. The escort commander ordered the brig to stay with the merchant ships and the Lark to initiate the attack, with the slower Warwick following. By the time HMS Warwick arrived the Glorioso had badly damaged the Lark but was herself so badly raked that she was partially dismasted. The Spaniard sailed on, having taken structural damage and some casualties, and the British ships broke off the action – one indeed which they might have been victorious in had they persisted.

Outcome: Round One to Glorioso.

Nearing the Spanish coast, off Cape Finisterre, the Glorioso now encountered three further British ships, the same combination as before of a ship-of-the-line (HMS Oxford, 50-guns), a frigate (HMS Shoreham, 24 guns) and a brig (HMS Falcon 20 guns.) In an engagement lasting three hours all the British ships were damaged and the Glorioso, though she had lost her bowsprit, escaped to the harbour of Corcubión, in North-West Spain. There she off-loaded her silver cargo.

Outcome: Round Two to Glorioso .

Her repairs compete as much as Corcubión’s facilities would allow, the Glorioso headed for the well-equipped base of Ferrol, further north. Adverse winds, which damaged the rigging, made the Glorioso’s   Captain de la Cerda to head south instead towards Cadiz. Fully aware of the presence of British units, he decided to stay far off the Portuguese coast. In the event however, this availed him nothing and on October 17th the Glorioso ran into a squadron of British privateers – not Royal Navy ships – close to Cape Saint Vincent. 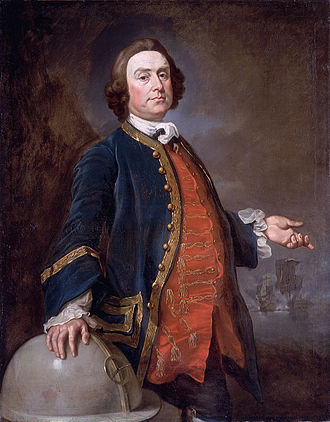 At this point it’s appropriate to pause to look at the nature and composition of this privateering squadron. It was commanded by teh 47-year old Captain George Walker but funded by private financial interests in London and Bristol.  Walker’s reputation was already high and on a previous voyage each ordinary seaman under him had received £850 as his share of prize money – a quite enormous sum at the time. Walker had therefore no trouble in recruiting hands for his next venture and in April 1746 he sailed from Britain with four ships named King George, Prince Fredrick, Duke and Princess Amelia, carrying between them 960 men and 120 guns. By the time this force entered Lisbon eight months later prizes worth some £220,000 had been taken without the loss of a single man. After adding two more vessels to his squadron – the Prince George and the Prince Edward – Walker sailed out from Lisbon in July 1747 to resume commerce raiding. His six-ship task force had by now become commonly known as “The Royal Family”.

The Prince Edward was lost soon afterwards in an unusual accident. She had crowded on so much canvas that pressure above pulled the heel of the mainmast out of its step, the mast then plunging down to smash a hole in the ship’s bottom. Only three men survived the rapid sinking that followed. Despite this setback the Royal Family was to have a profitable cruise and in early October put in to Lagos Bay to take on water. From here, in the early morning of October 17th, a large ship was seen approaching – this was the Glorioso. Only two of Walker’s ships were ready to give chase, the King George, with thirty-two guns and 300 men, and the Prince Fredrick with twenty-six guns and 260 men. 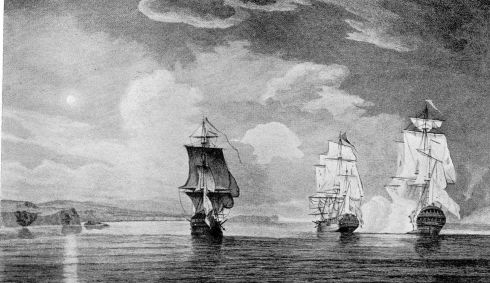 Glorioso (left) in action with King George and Prince Fredrick

The chase continued until midday, when the King George came up to the Glorioso. At this point the wind fell to dead calm, leaving the Prince Fredrick too far back to render support to her consort. King George and Glorioso lay at a distance from each other, all but motionless, for some five hours, the latter with the lowest tier of guns run out. Only thereafter did a light breeze spring up and the Glorioso headed for Cadiz, with King George in close pursuit and the Prince Fredrick following at a distance. By 2000 hrs King George was close enough to pull alongside Glorioso and hail her – it appears that there might still have been some idea that the Spaniard was an armed merchantman that might decline to fight. Glorioso replied with a full broadside, knocking out two of King George’s guns and bringing down her main topsail yard. The fire was returned and what was to be a three-hour battle commenced.

What saved the King George from outright destruction appears to be that the Glorioso’s gun-ports were so small and her sides so thick that her guns could only be trained or depressed at a very limited angle. The consequence was that hitting a small vessel such as the King George was difficult in the extreme. Despite this however, three hours pounding at close range (how did flesh and blood endure it?) King George had suffered serious damage to her masts and most of her standing rigging had been shredded. Only after the Prince Fredrick, driven by a very light wind, arrived about 2230 hrs did the Glorioso break off the action and head for Cadiz.

OUtcome: Round Three to Glorioso, but only just.

Walker did not order immediate pursuit. In the morning however, realising that the King George’s injuries were not fatal and that his crew had sustained low casualties, and because the Duke and Prince George, and later the Princess Amelia, had now also joined him, he sent his other ships off after the Glorioso, following as best he could in King George.

A large ship was now seen approaching from the east and on recognising it as a British warship Walker sent a note by one of his boats to explain the situation. She was the 80-gun HMS Russell, homeward bound from the Mediterranean and her captain now joined the Royal Family in the chase. 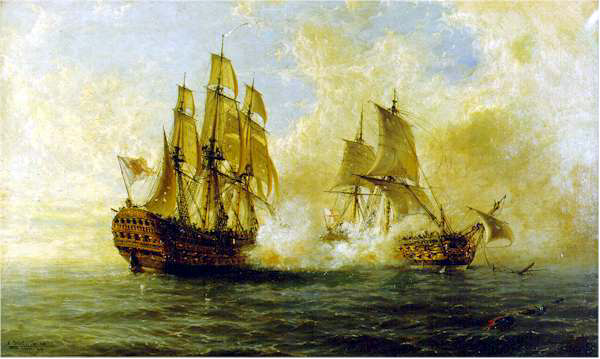 Glorioso was still ahead of her pursuers when yet another British warship, the 50-gun Dartmouth, which had been cruising to the west and had been attracted by the sound of gunfire, now met her on an interception course. A running fight developed, in the course of which a fire reached HMS Dartmouth’s magazines and she blew up. Out of a crew of 325, only fifteen were saved. One of these was a young lieutenant, John O’Brien, who was picked up off a floating gun carriage. When taken on board the Duke it appeared that he had been blown through a gun port. Though his clothes were burnt and in tatters, he excused himself to the Duke’s captain with the words “Sir, you must excuse the unfitness of my dress to come aboard a strange ship, but, really, I left my own with so much precipitation that I had not time to put on better.”

Outcome: Round Four to Glorioso, and decisively so.

The remaining pursuers, awed by the disaster to HMS Dartmouth held off attacking. At midnight however HMS Russell ran up beside Glorioso and began a five-hour long close engagement. After they had been through so much already one wonders how Glorioso’s crew were in a position to put up anything of a fight, yet they did so with great tenacity, despite 33 dead and 130 wounded. It was only at dawn that she finally struck her colours, dismasted and on the point of sinking.

Outcome: Round Five to the British, victory by knockout.

Or so it might have seemed. It appears to have been only after surrender that it was learned that the Glorioso’s silver had already been landed. Had this been known it could have been unlikely that Walker would have risked the Royal Family – the privateering enterprise was aimed at profit, not Britain’s national interest. One of Walker’s backers afterwards gave him “a very uncouth welcome for venturing the ship against a man-of-war”. Walker responded elegantly: “Had the treasure been aboard the Glorioso, as I expected, my dear sir, your compliment would have been far different. Or had we let her escape from us with the treasure aboard, what would you have said then?” 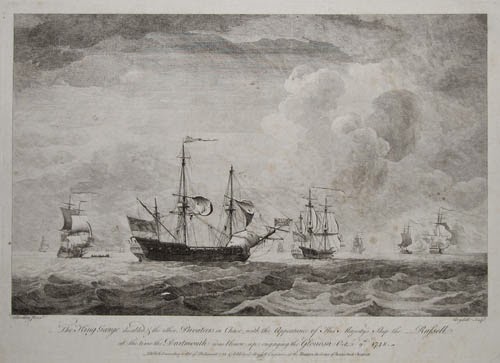 State of King George near the end of the last battle

After surrender, the Glorioso’s Captain de la Cerda and his crew were brought to Britain as prisoners. De la Cerda was to be honoured as much by the British for his achievement as he was by Spain itself, which later rewarded him with promotion to commodore. 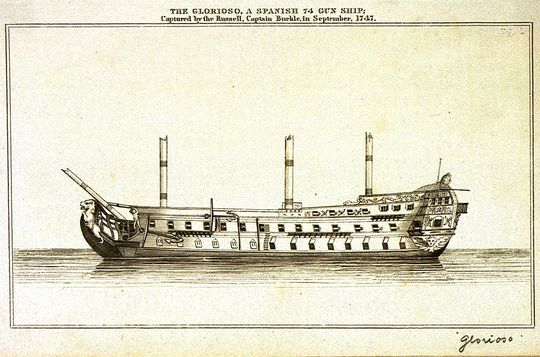 Glorioso as captured, too badly damaged to be taken into British service

And Walker? He continued cruising until the end of the war, the Royal Family’s total prize money being reckoned as more than £400,000. His subsequent career was less glorious. He appears to have lost or squandered the money he had won with the Royal Family, got involved in a dispute with shipowners about accounts, and was imprisoned for debt in the late 1750s and died in 1777. No matter what happened later however, nothing could take away the fact that he had been one of the few captains who ever ran a small and outgunned ship against a 70-gun ship and engaged her yard-arm to yard-arm.