In both World Wars the greatest danger many troops faced, especially if they were in support or non-frontline roles, may well have been that of sinking of their transports. It is a tribute to the efficacy of convoy and escort provisions that in practice only few of the millions of men who were transported by ocean did experience such nightmares. When the worst did happen however the chances of escape from below decks on an overcrowded troopship could well be low and the casualty numbers correspondingly high. One such disaster, largely forgotten today,  involved the liner Royal Edward in August 1915.

1915 can be fairly regarded as the year in which the submarine first demonstrated its full potential far from home bases. The sinking by German U-boats of the Lusitania, the attacks on naval vessels off the beaches of Gallipoli (click here for a blog article on this) and the campaign against Britain’s fishing fleet were examples. In the second half of the year U-boats operating out of Austro-Hungarian bases on the Adriatic found new hunting grounds the Eastern Mediterranean and the Aegean. The Dardanelles expedition was stalled, but still manpower-intensive. The Turkish threat to the Suez Canal remained and Mesopotamia – modern Iraq – sucked in more and more troops as British advances there met increased opposition. Together, these demands necessitated major Allied shipping movements, including troop transportation, in the Mediterranean. 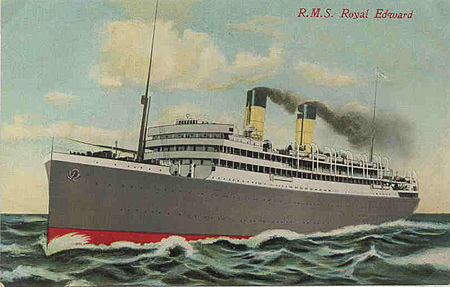 The Royal Edward was a large, modern and virtually new liner when, like her identical sister Royal George, she was requisitioned for service as a British troopship in 1914. Of 11,117 tons and 523 feet long, and originally named Cairo and Heliopolis, these vessels had been built for fast mail-service between Marseilles and Alexandria. Steam turbines and three shafts gave them a top speed of 19 knots and they had accommodation for 1114 passengers, 344 of them in first class. In 1909 both ships were sold on to the “Royal Line”, a subsidiary company of the Canadian Northern Railway, to establish a service between Britain and Canada. They were renamed Royal Edward and Royal George. Under these names, they were to become troopships, a role for which their size and speed made them ideal.

In July-August 1915 the Royal George transported troops from Britain who were intended to reinforce the British 29th Division at Gallipoli. A brief stop was made at Alexandria before heading north-west up into the Aegean towards the main British staging base at Mudros. Sources vary as to the exact total of men carried but it appears to have been around 1600, of whom some 200 represented crew. By this stage German – and to a lesser extent Austro-Hungarian – submarine presence had been making itself felt in the area. Among these craft was the tiny coastal submarine UB-14. 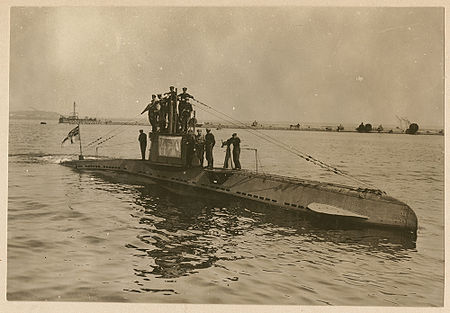 UB-14 and her crew – tiny but very, very dangerous

Constructed at Bremen in North Germany and a mere 92 feet long and of only 125 tons surface displacement, the UB-14 was a new vessel. She had been transported overland, in sections, by rail from Germany before being reassembled at the Austro-Hungarian base at Pola. Her armament was limited – two 17-inch torpedo tubes and a single machine gun. She had a crew of fourteen and diesel and electric power on a single shaft only. Despite her small size and puny armament, she was destined to inflict higher losses on the enemy than many larger and more potent vessels. 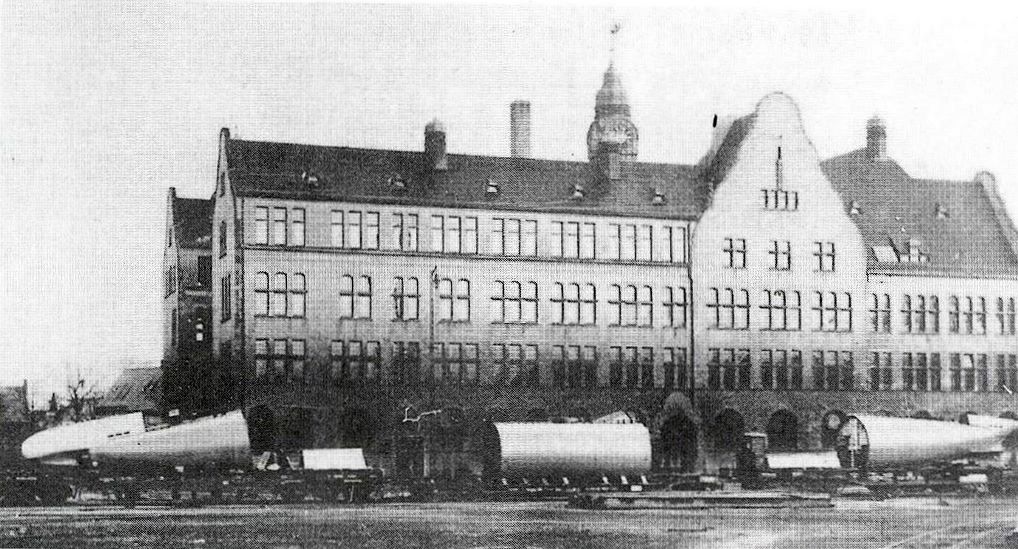 UB-14’s sister, UB-13, being transported by rail – in sections – from Germany

Her debut was spectacular. Under her first commander, Oberleutnant Heino von Heimburg (1889-1945), she sank the 9800-ton Italian armoured cruiser Amalfi off Venice in July 7th 1915. This was von Heimburg’s second victory, for while previously commanding UB-15 he had sunk the Italian submarine Medusa on June 10th.  Following the Amalfi sinking, UB-14 received orders to proceed to Turkey – a passage achieved only with difficulty, and under tow for part of the way by an Austro-Hungarian destroyer, due to her limited range. 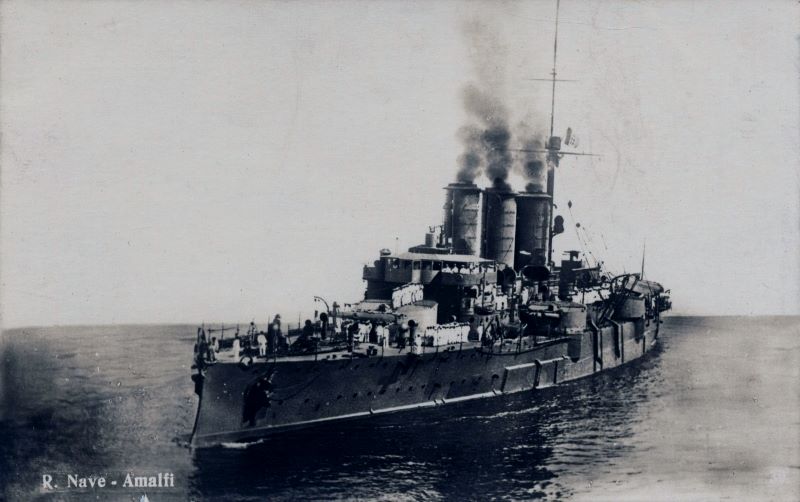 On August 13th UB-14 sighted two ships, unescorted, some 60 miles north of Crete. The first proved to be a hospital ship, the Soudan, and, marked as such, von Heimburg allowed her to pass safely. The second was the Royal Edward. It seems that an evacuation drill had taken place on board her only shortly before and a major part of the troops carried was now below and re-stowing their kit, a fact that was to have tragic consequences. At one-mile range UB-14 launched a single torpedo. It struck the troopship close to the stern and she began to settle quickly. Though the radio operator had time to transmit a distress signal the huge ship went down in six minutes. Many of the troops, trapped below, went down with her but many also found themselves in the water. 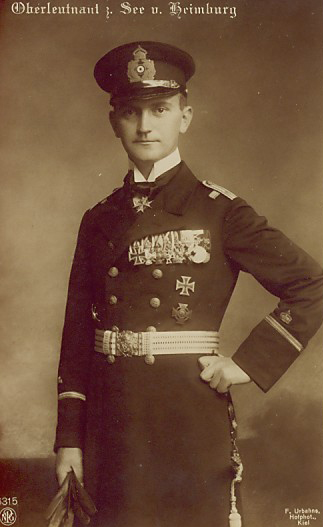 Alerted by the radio message, the Soudan came about and spent the next six hours recovering some 440 men. Two French destroyers and some trawlers also arrived and rescued another 221. Despite this, the final death toll was still high – some 935 according to some accounts. UB-14had already departed from the scene and the lack of British escorts had almost certainly contributed to her success.

UB-14’s career was only beginning. Three weeks later, on September 2nd 1915, still in the Aegean, she torpedoed the 11,900-ton transport Southland, then carrying Australian troops. Though 40 of the 1400 men on board died, the remainder got away in lifeboats. The Southland herself was saved from sinking by being beached on a nearby island. Though repaired, her luck was not to last and she was to be torpedoed and sunk in 1917 off the north-west coast of Ireland.

In late 1915 the UB-14 made the dangerous passage up the Dardanelles but was forced to put into port for repairs. Her next victim was not to be by torpedo but due to a personal exploit by Oberleutnant von Heimburg. On September 4th a Royal Navy submarine, the E7 had also made the passage dangerous through the strait but had become entangled in nets below the surface. Turkish craft had dropped several mines around her, but without result. von Heimburg took matters into his own hands. He rowed out to the site with the UB-14’s cook and used a plumb weight to locate the E7. On finding metal and knowing he was directly over the trapped submarine he dropped a further charge. Deciding that the game was up, the E7 surfaced and came under fire from Turkish shore batteries. Her commander ordered “abandon ship” and set scuttling charges, thereby sinking his vessel. von Heimburg somehow survived this maelstrom and was subsequently – and deservedly – awarded the Pour le Mérite, the coveted Blue Max.

UB-14 was to operate thereafter in the Black Sea, where she was to sink two Allied vessels in October 1915, and in the Sea of Marmara, where she sank the British submarine E20 in November. Von Heimburg was replaced as commander early in 1916 but the UB-14’s Black Sea career was to continue to the end of the war. She ended by being scuttled off Sevastopol in early 1919 following Germany’s surrender.

And von Heimburg’s later career? He was to retire from the German Navy as an admiral in 1943, following which – one regrets to record – he became a judge on a Nazi “People’s Court”. He was captured by the Soviets in 1945, taken to Russia, and died in captivity there. It was an ignominious end, in both moral and personal terms, for an undoubtedly brave man.