It is now over a century since bombing from the air became an integral feature of warfare, with civilian populations being at the mercy, at best, of collateral damage and, at worst, of deliberate targeting. It is therefore all the more difficult to comprehend the indignation and loathing aroused by the first deliberate bombing of civilian targets early in World War I. The large Zeppelin forces fielded by Imperial Germany’s separate Army and Navy organisations began the practice. They were used to strike British towns and cities, apparently in the hope of arousing widespread panic among the civilian population and thereby cutting into industrial production. The physical results were wholly disproportionate to the demands made on strategic resources (notably aluminium) and the most concrete single result was to give a gift to Allied propagandists who could label the Germans “baby killers” since children were inevitably among the victims. Imposing and ominous sights these airships might have been, but their load-carrying ability was limited and they were underpowered in relation to the vast forces imposed on them by weather. If they could be detected by defending aircraft – and that was a major “if” at night, and even in daytime, in those pre-radar days – these hydrogen- laden airships were spectacularly vulnerable to fixed-wing aircraft firing incendiary bullets. Adding to these drawbacks was the difficulty of navigation and inability to locate even city-sized targets with any hope of success – the necessary technology did not emerge until the early years of World War II. The vulnerability and essential uselessness of these airships as an offensive weapon are epitomised by the fate of Zeppelin L-19 in February 1916, a case that also raised serious ethical issues. 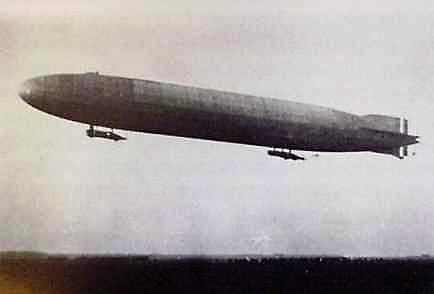 L-19 was a 536-feet long rigid airship powered by four 240-Hp Maybach petrol engines which gave it a maximum speed in still air of 60-mph. Any headwind would obviously cut into this speed and winds from the flank would cause drift off course. Her bomb capacity was significant for her day – rated at 3530-lbs (just over one and a half tons.) She entered service German Navy service in late November 1915 and in the next two months made reconnaissance flights over the North Sea. On 31st January 1916 she joined eight other airships the largest air-raid yet mounted on Britain. Leaving the base at Tondern in Schleswig at noon she headed westwards across the North Sea, the objective being “targets of opportunity” in England, including Liverpool, if it could be reached. Heavy rain and snow were encountered and the Zeppelins crossed the English coast individually some six to seven hours after departure, meaning that they were by then flying in darkness. The L-19 was the last of the force to arrive, passing over Norfolk and locating Burton-on-Trent some 140 miles further west in the English Midlands. Here she dropped part of her bombs before flying south-west towards Birmingham where the remainder were unloaded. It was possible that the commander did not know where he was – the crew of one of other Zeppelins that reached Burton believed that they had bombed Liverpool, in actuality far to the North West. The damage inflicted by the L-19 was minimal – a public house destroyed, some farm animals killed, but no people injured. The raid as a whole killed 61 people on the ground and injured 101. The effect on Britani’s ability to wage war was undiminished but anti-German feeling would be raised to a new pitch. 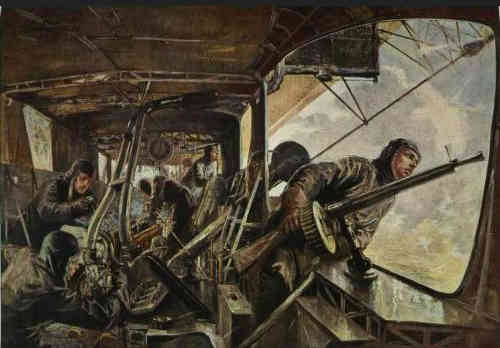 Inside a Zeppelin gondola – illustration from 1917

The L-19’s tragedy was now just beginning however. She had problems with her engines – a new design that was showing signs of unreliability in service – and indeed more than half of the other airships involved in the raid had such troubles also. As she headed back eastwards over England and out into the Southern North Sea, the L-19 signalled by radio the results of her bombing and requested a position-fix by radio-triangulation. By the time of her final signal, at 0400 hours on 1st February, she reported problems with her radio and that three of her four engines were out of action, leaving her wholly at the mercy of the weather. She was then some 20 miles north of the Friesan Island of Ameland, off the northern Dutch coast. Some while later she drifted across Ameland itself and Dutch forces there, though neutral, fired on her – ineffectively – with rifles. The L-19 seems to have remained powerless through the day that followed and a southerly wind carried her northwards. Sometime during the nights of 1st – 2nd February the L-19 came down in the sea. The captain dropped a bottle – it contained a report of the airship’s predicament and letters to his family. It was only picked up long afterwards. Without information on L-19’s position, it is not surprising that German efforts to locate her proved futile. 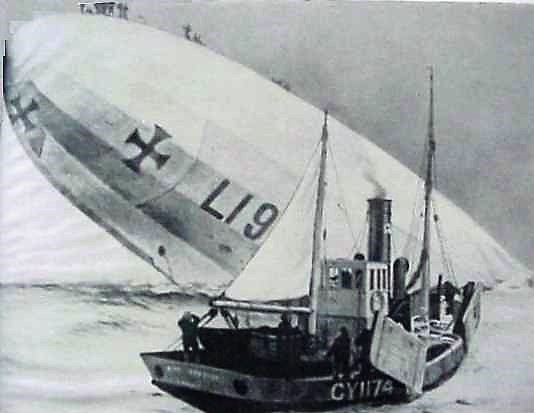 The airship was still afloat, with her sixteen-man crew clustered on top. They had fired flares during the night and these drew the attention of a British fishing vessel, the civilian King Stephen steam-trawler, commanded by a Skipper William Martin (1869–1917). Hope of rescue rose as the English-speaking German airship captain hailed the King Stephen and asked for his crew to be taken aboard.  Skipper Martin of the King William refused, on the grounds that his own unarmed nine-man crew could be overpowered and his vessel taken to a German port.  Pledges by the German captain of honourable behaviour and offers of financial reward did not shake Martin’s resolve. He did however undertake to report the airship’s location to any British warships he would encounter. He was to meet none and the incident was not reported until the King Stephen docked at the fishing port of Grimsby on the British East coast. The weather had been worsening as she left the L-19. No trace of the airship was found thereafter by searching British warships though several more messages in bottles and the body of a single crew member were later washed up. 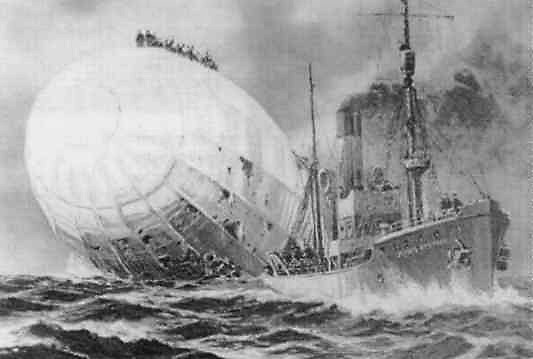 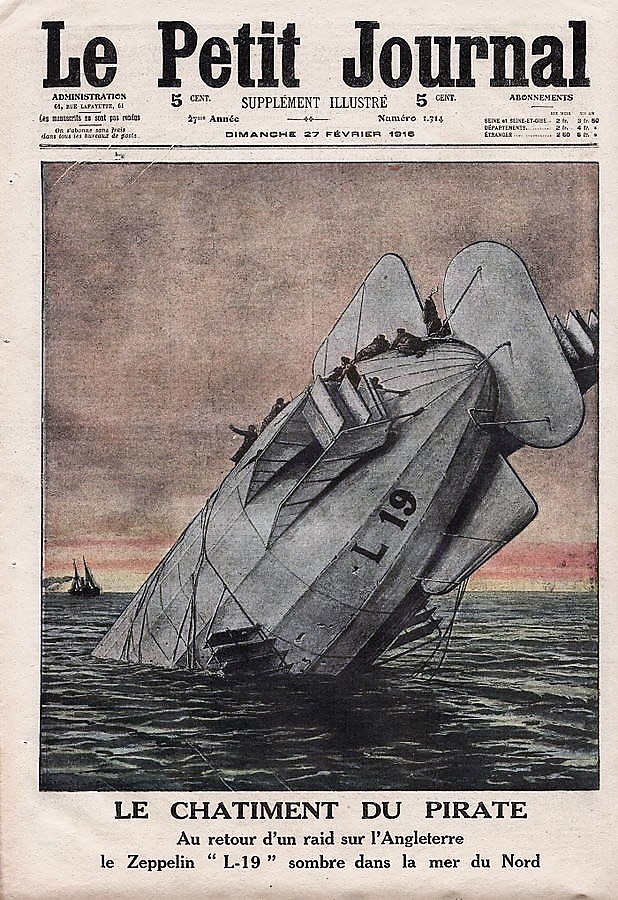 L-19 as imagined by a French magazine

Skipper William Martin’s dilemma was a terrible one, and, on balance, it is hard to condemn his decision to leave sixteen men to their fate provided he reported their location. Even allowing for anti-German “baby killer” propaganda, concern for his crew offered an arguable justification. Pro and contra views were taken in Britain and Martin received mail both praising and excoriating him. The Anglican bishop of London was a stalwart supporter of his action. Martin died of a heart attack the following year, brought on perhaps by the controversy. The incident proved counterproductive in propaganda terms, allowing Germany to counter “baby killer” accusations by referencing the L-19’s men being left to their death when deliverance was at hand.

The King Stephen / L-19 incident may not however have been as straightforward as portrayed at the time. Investigation of Admiralty archives in the early 1960s, and interviews with the trawler’s two surviving crew members, indicated that the position reported by Skipper Martin may have been deliberately incorrect, resulting in the Royal Navy’s futile search efforts being concentrated in a wrong area. The reason appeared to be that he had been fishing in a forbidden zone and that he did not want to reveal the fact.  The King Stephen’s own remaining life was to be short one – taken into Royal Navy service she was sunk twelve weeks after L-19 had gone to the bottom.

Over a century later it is difficult to judge or to condemn any of the parties involved – unless Skipper Martin was in fact lying. Total war, with all its horrors, was a new reality and hard decisions would lie ahead in land, sea and air combat. The ultimate responsibility for the fate of the L-19’s crew – dedicated professionals doing a difficult job – lies far from them and rests forever on other shoulders.

Start the 10-volume Dawlish Chronicles series of novels with the chronologically earliest: