Skip to content
British Spying in the Revolutionary and Napoleonic Eras

One of the pleasures for me when I joined the historical novelist community a decade ago, was meeting writers who specialise in periods other than the Late Victorian Era in which my own work is set. One of these is Tom Williams. He has written a series – the James Burke books – set in the Revolutionary-Napoleonic period – and another set in the Early Victorian era. Tom has also set books in the present day. I personally find the secret service activities of Tom’s protagonist, James Burke, fascinating and I’ve accordingly invited him to write a guest blog on the historical background. Over to you Tom!

British Spying in the Napoleonic Era

James Burke, the hero of my series of novels about a Napoleonic spy, was a real person. The first book, Burke in the Land of Silver, is closely based on fact and his adventures in Spain (Burke in the Peninsula) draw on the exploits of another real-life character, Sir John Waters. But when Antoine Vanner suggested I write about spying in the Napoleonic wars, I panicked. I feel I know hardly anything about Napoleonic spying. And there’s a reason for this. Spying, by its nature is a secretive activity and it’s difficult to work out who exactly was doing what to whom. Spying also seems to generate a quite ridiculous amount of interdepartmental rivalry. You see this in the Burke books where James Burke who, as a soldier works for the Army’s own intelligence service, gets caught up in rivalry with the Alien Office, which was responsible for intelligence and counter-intelligence in Britain. You see it nowadays with the rivalry between MI5 and specialist police units (Special Branch and the National Crime Agency) as MI5 moves into the fight against organised crime. So what were the key agencies working in James Burke’s time and how do they compare with agencies today?

Burke was seconded from his regular regimental work to conduct intelligence work, reporting directly to the British commander-in-chief, the Duke of York. In the books I have him actually report to the Duke’s aide de camp, which seems more credible. Whatever the detail of who he dealt with, the important point is that he was engaged in undercover intelligence work for the Army, rather than any of the other intelligence organisations. The Army still has its own Intelligence Corps which operates independently of other intelligence services.

Besides controlling its own undercover agents, Wellington’s army made a lot of use of Exploring Officers. These officers were not spies as such and they wore uniform on their missions. Accounts of some of their activities suggest that this was not always the case but they were supposed to be acting as soldiers rather than spies like James Burke. However, their activities often meant riding behind enemy lines to bring back details of terrain and enemy units. Their role was very similar to that of today’s Special Reconnaissance Regiment in the British Army. 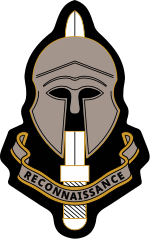 The Alien Office was formed in 1793 at a time when the rising number of French refugees was leading to concern that revolutionaries may make their way to Britain claiming to be fleeing the French regime. It’s interesting to see that the idea that terrorists might enter the country disguised as refugees has been around for over 200 years and shows no signs of going away.

In 1794 control of the Alien Office was taken by William Wickham who substantially enlarged the office and its function. Refugees were interviewed in the hope that they could provide useful intelligence on what was happening in France and they might be recruited to return to their country as agents for Britain. The Alien Office became essentially Britain’s Secret Service.

Wickham expanded the role of the Alien Office far beyond its original remit. By 1800 he was funding insurgency groups in France as well as paying individual agents. His total expenditure that year came to over £3.6 million , considerably beyond the £100,000 that was the official legal limit for foreign Secret Service expenditure.

Wickham moved on from the Alien Officed in 1802, leaving it a powerful and effective organisation involved in all aspects of espionage and counter-espionage.

In recent years there has been a lot of discussion about the economic case for the Royal Mail’s monopoly of postal services, but many people don’t realise that the original reason for a Royal Mail monopoly was that it made it much easier for the government to read your letters. The government had been intercepting the mail since Tudor times but by the end of the 19th century, an entire office was dedicated to this – the Secret Office of the Post Office. The Secret Office worked closely with the Alien Office and all mail from France was intercepted and read. There was even a specialist Deciphering Branch to analyse messages sent in code.

In an age before electronic communication, the Secret Office and the Deciphering Branch performed a role similar to GCHQ today.

Taking the fight to the enemy

Britain also used undercover agents to take the fight to the enemy, much in the way that the Special Operations Executive did in World War II. Britain funded anti-government troops, supplying them with equipment and smuggling émigres back across the Channel to work against the French government. The best-known British-backed plot is probably the attempted assassination of Napoleon using what was, in effect, the world’s first car bomb (or cart bomb). Britain was closely involved in the plot, which was almost certainly controlled from London. Britain also assisted the terrorists in travelling to Paris and some of those involved were British agents. 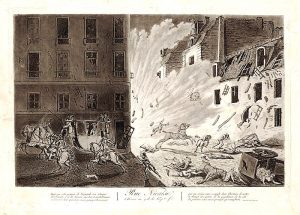 The bomb blast demolished most of a block of buildings in the French capital and came very close to killing Napoleon. Later British plots were less dramatic but British involvement with Royalists trying to overthrow the government continued throughout the war.

Acknowledgements
One of the advantages of being a writer of fiction rather than a “proper” historian is that I do not need to carefully record the sources of all the information I gather. However, the following have definitely been useful:
Tim Clayton (2018) This Dark Business Little, Brown: London
Carlos de la Huerta (2016) The Great Conspiracy Amberley Publishing: Stroud
Peter Pyne (1998) A soldier under two flags Etudes Irlandaises 23-1 pp. 121-138
The illustration of the attempt on Napoleon’s life is from an unattributed etching published in 1800 and now in the public domain

James Burke’s adventures (after the initial book, Burke in the Land of Silver) are largely inventions but he does come up against “real” spies of the period in several of the books. Burke in Ireland finds him working, somewhat reluctantly, for William Wickham, who was heavily involved in running spies in Ireland where French agents were also very active. Burke and the Pimpernel Affair describes the way in which the British infiltrated agents into France and through a chain of safe houses to Paris. It also features the French spymaster Fouché whose secret police covered every aspect of French life. He was a truly unpleasant man.

To read more about the James Burke Series, and find ordering links, 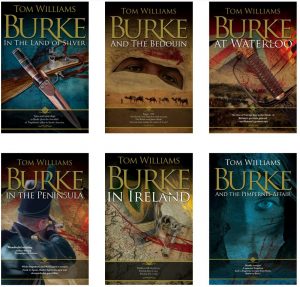