In my novel Britannia’s Spartan (click for details), set in 1882, an important role is played by a cruiser of the Imperial Chinese Navy, the Fu Ching. She is the fictional sister of two warships the Yang Wei and the Chao Yung, that did indeed serve in that navy. For a short period in the 1880s these vessels carried what was probably the heaviest armament for any ships of their sizes afloat. Built in British yards, their design had been evolved by Sir George Rendel, building on the success of his earlier concept, the “Flatiron Gunboat” which was armed with a single large-calibre weapon. (One of these gunboats is the heroine of my novel Britannia’s Reach (click for details). While these “Flatirons” were intended for use in estuaries and sheltered waters, the new design envisaged a small, cheap cruiser-type vessel suited for service in the open sea and carrying two of the most powerful guns then available. These were Armstrong 10” breech-loaders.  With reasonable speed for the time, and with high mobility, these vessels would be suited, in theory at least, to engage larger and more heavily armoured, but less nimble ships. Despite the superficial attractiveness, the concept was turned down by the Royal Navy, due to concerns about seaworthiness in the English Channel and the North Sea. These areas might well become battlegrounds in any future war since France was perceived as Britain’s most likely potential enemy in this period. 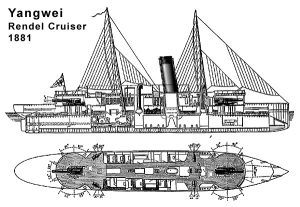 Overseas customers were now sought and the first ship of the type was laid down for Chile in 1879 as this nation’s war with Peru and Bolivia was commencing. In the event that war ended before the vessel was completed and she was taken over by the Imperial Japanese Navy as the Tsukushi.  She was to serve without distinction in the Sino-Japanese War of 1894-95 and the Russo-Japanese War of 1904-05.Her construction and completion was however overtaken by two generally similar vessels for another Far Eastern customer when an order was placed by China. In the early 1880s the corrupt and floundering Chinese Empire was wakening up to the threats posed by growing Russian and Japanese power on its northern and eastern borders, as well as the pressure from France  the south, from what is now Viet-Nam, and which was to erupt into the Sino-French War of 1885 which ended in a humiliating Chinese defeat. The need for a strong navy to protect China’s long coastline was obvious but corruption and inefficiency was to make progress in this spasmodic and inconsistent. A few ships of limited capacity could be built at the Foochow Dockyard and equipped with imported guns, but the majority were contracted from European sources, German as well as British, resulting in a wide variety of calibres of guns and munitions.

Japanese view of the Battle of the Yalu, 1897
One of the superb woodblock prints made in Japan at the time

The two Chinese “Rendel cruisers”, named Yang Wei and Chao Yung were of a mere 1350 tons, length 220 feet and beam of 32 feet. Two compound engines, each of 1300 HP, ensured a maximum speed of 16 knots, a respectable speed at a time when the Royal Navy’s HMS Iris, then entering service, was regarded as a marvel for achieving just under 18 knots. Like the Iris, the Chinese cruisers were of all-steel construction, which was also an innovation, but their most remarkable feature was their armament. Each ship carried two 10-inch Armstrong breech-loaders, one forward, one aft. There were mounted so as to pivot inside fixed steel drums, armoured shutters being raised to allow bearing on limited arcs ahead and astern (45 °) and on either side (70 °). In addition each ship carried four 4.7 – inch breech-loaders, two on each broadside, as well as what would have been a fearsome collection of Gatling and Nordenvelt guns’ for protection against torpedo boats. The hulls had only low freeboard fore and aft and had to be built up for the delivery voyage from Britain to China. A simple fore and aft rig was carried to supplement the engines and was probably of most use during delivery. Like Royal Navy ships of the period – notably HMS Inflexible – electricity generation on shipboard represented a major innovation, allowing incandescent light fixtures, including arc searchlights. Hydraulic steering was another innovation – and perhaps a needless complication. 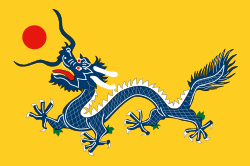 The Yang Wei and Chao Yung entered service in 1881. Though spasmodic efforts were made to fashion the Chinese Navy into an effective force, the state of unrest, corruption and reluctance to challenge traditional thinking meant that the process was never effective. This was by comparison with the fast-modernising Empire of Japan, which already had ambitions to dominate the Far East and set out to build a powerful navy on the model of the Royal Navy. Japanese naval development was based on coherent planning, with the emphasis not only on the necessary “hardware” – the ships and weapons – but also on “software aspects” – structured organisation, training plans and an ethos of professionalism and pride. By contrast the Chinese navy acquired ships on a random and piecemeal basis, without reference to any single coherent plan. Corruption was rife and the navy was divided into as many as four different “fleets” which at any time might, or might not, cooperate with each other. 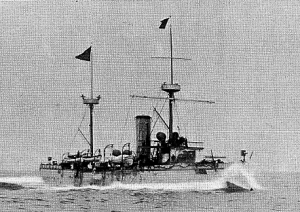 The Sino-Japanese War of 1894-95 announced Japan’s arrival as a major power on the world stage and resulted in humiliating defeats of Chinese forces by both land and sea.  By the time of the war’s outbreak, the Yang Wei and Chao Yung were in a very poor state of maintenance, little more than half their original top speed being achievable and probably several of their weapons being unserviceable. Extensive use of wooden partitioning, overlain with layers of varnish, made them particularly vulnerable to onboard-fire. The concept of the large but slow-loading gun-armament on a small vessel with limited armoured protection was by now overtaken by the development of smaller-calibre quick-loading weapons. In addition, lack of professionalism and corruption so serious that there were rumours of munitions being sold off by officers had made the Chinese Navy a hopeless adversary against the super-efficient Japanese.

In the key Battle of the Yalu on 17th September 1894 both the Yang Wei and the Chao Yung were placed in the Chinese line of battle. They were subjected to a hail of explosive 6-inch and 4.7-inch shells from the Japanese cruisers involved and both vessels were soon engulfed in flames as the wooden fittings took light. 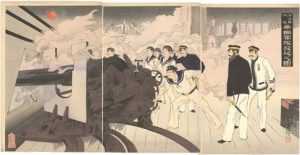 With her steering damaged the Yang Wei collided with the German-built Chinese cruiser Jiyuan and sank in shallow water, as did the Chao Yung, which may have been trying to save itself by beaching. It was a sad end for two vessels which in their time were mistakenly regarded as being at the cutting edge of naval development. 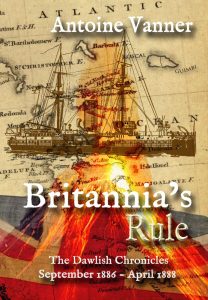 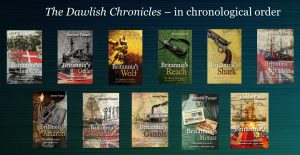