Two spectacular cases of submarines penetrating enemy anchorages are well known to naval-history enthusiasts. the first was when the Royal Navy’s E14, commanded by  Lieutenant Commander Edward Boyle, surfaced in the Golden Horn, in the heart of Istanbul, in May 1915. This followed penetration of the heavily-mined Dardanelles, and was part of a successful campaign against Turkish shipping. The second instance was when Germany’s U-47, commanded by Kapitänleutnant Gunter Prien, found her way through the defences of the Royal Navy’s protected anchorage at Scapa Flow in 1939 and sank the battleship HMS Royal Oak at anchor there.

A third equally daring action is this type deserves to be better known and though it ended in tragedy it involved courage and skill of a very high order. It was also to be the prelude to an amazing – and unlikely – second career for the submarine involved. The story also links two decent and heroic men who, in other circumstances, might well have valued each other as friends.

The submarine was a combat-unproven weapon at the outbreak of war in 1914, but several major navies, including that of France as well of those of Britain, Germany and the United States, had invested heavily in such vessels in the previous decade. Extensive testing and evaluation of operational procedures had been undertaken and a number of second-rank navies were rapidly following suit. Alternative design approaches were still being investigated and French development followed a somewhat different track than other navies. This was epitomised by the large number – 34 in total – of generally similar Brumaire-class and Pluviôse-class boats designed by Maxime Laubeuf.  Though all had electrical underwater-propulsion, several of the earlier-constructed units were powered on the surface by steam – which slowed diving and proved impractical operationally. (The French experience was not taken to heart by the Royal Navy, which later committed heavily to its own disastrous K-class). Later Brumaire/ Pluviôse boats had diesel power for surface running.

These craft were 167 to 171 feet long and had a surface displacement of 398 tons and in their time were innovative as being of double hull construction. This involved a generally cylindrical inner hull, strong enough to resist external pressure, but with an outer, boat-shaped hull to improve surface seakeeping. Innovative when new, these features became standard thereafter in most other navies . To modern eyes however the Brumaire and Pluviôse classes had a strange appearance, unlike those of other navies of the time, whose vessels looked generally similar to those we see today. The Laubeuf boats had no coning tower (or in modern parlance “sail”) as such, only a small, low open bridge for steering on the surface.  Extending fore and aft of this platform was a walkway supported on stanchions. In the open space below this were four “Drzewiecki” drop-collars which each carried an 18-inch torpedo at the start of a cruise, with two reloads carried in cradles beneath the walkway. These six torpedoes were therefore carried externally and these, plus the walkway, can only have added significantly to parasitic drag. There was in addition a single 18” torpedo tube in the bow, into which a reload could be inserted from within without the need to surface – as was impossible with the drop-collars. Carrying eight torpedoes, these boats has a very powerful offensive capability

Montgolfier, Brumaire-Class , sister of Curie, seen at anchor on the Seine in Paris (!!)

The Curie, launched in 1912, belonged to the Brumaire-class, with diesel power for surface running.  In August 1914, when France and Britain went to war with the Central Powers – Germany and Austro-Hungary – Curie was assigned to supporting the French Navy’s attempt to close off the Otranto Straits between Southern Italy and Greece. By so doing they would bottle-up the efficient and locally powerful Austro-Hungarian navy within the Adriatic. (Click here for a separate article about this).  Blockade was however a slow process and more daring spirits considered the possibility of infiltrating a submarine into the main Austro-Hungarian naval base at Pola, close to the head of the Adriatic, so as to sink major units moored there.

Some of Curie’s crew – note the tiny steering plafform 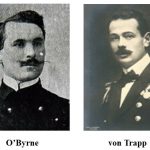 Curie was chosen for the mission, probably not least because of the competence and obvious flair of her commander, who had apparently conceived the idea of such an attack. Born in 1882, Lieutenant 1stClass Gabriel O’Byrne was, despite his name, French, a descendent of one of the Irish “Wild Geese” who entered French service during the 18th Century when Penal Laws in Ireland barred Catholics from any significant Civil or Military service. Entering the Navy in 1896, O’Byrne was to see service in China during the Boxer Rising in 1900 and was later to specialise in submarines, taking command of the Curie shortly after her commissioning.

On December 17th 1914 the Curie was towed half-way up the Adriatic by the armoured cruiser Jules-Michelet. It should be noted that at this time Italy was still neutral and operation from an Italian base nearer to Pola was not an option.  The Curie, with a complement of 29 and her mascot dog (possibly called, most appropriately, “Radium”), was cast off 150 miles from Pola. She spent the following day approaching the Austro-Hungarian base, making most of the passage on the surface. She submerged closer to shore, passing unwittingly but safely through a defensive minefield. December 19th was sent probing the harbour’s approaches and defences – which were complex, as can be seen from the contemporary illustration below. Still undetected, O’Byrne resolved to make his entrance, submerged, on December 20th.

Curie’s penetration of the Pola base

Maintaining a depth of some 60 feet, Curie reached the harbour’s outer boom around midday. Scraping of short duration was heard as she passed what appeared to the mooring cables of the outer boom. O’Byrne now took her up to periscope depth and saw, too late, the buoys of a second boom directly ahead. The Curie was almost instantly caught in steel netting. Ballast tanks were vented in desperate attempted to sink free and the crew were set to race back and forth to alter trim while the motors raced to drag the craft clear. It was to no avail. The propellers themselves became entangled and soon the over-heated electric motors were threatened to burn out. These efforts continued for four hours and the air became increasingly so foul that the dog died of asphyxiation and the crew were in little better shape. The last attempt to break free pitched the craft 30 degrees bow-down. This caused sea-water to reach the battery terminals, thereby releasing  poisonous chlorine gas.

The situation was now hopeless. O’Byrne destroyed his secret documents and ordered surfacing, knowing from the sounds of nearby propellers that there were enemy vessel almost directly overhead. As the Curie broke surface these vessels opened fire on her, as did a nearby shore battery. One shell penetrated the steering position, another the pressure hull. O’Byrne now ordered “Abandon ship!” and opened all vents to scuttle the craft. He himself was wounded – in the lungs – and his second-in-command, Lieutenant Pierre Chailley, had been killed outright. The coxswain had been wounded badly enough to die in hospital shortly after. O’Byrne had to be dissuaded from going down with his command.  He found himself in the icy water with his men for the next hour until they were rescued by boats from one of the Curie’s intended targets, the dreadnought Viribus Unitis. All the prisoners were treated with dignity – indeed admiration – and in view of the gravity of his injuries O’Byrne was sent to a hospital in Graz in Austria. Here, in June 1915, the Austro-Hungarian authorities allowed his wife to come from France to care for him. Here we’ll leave O’Byrne for now, but we’ll return to him later.

Under new management: Curie reborn as U-14. Note the heightened steering platform.

Austro-Hungarians efforts to raise the Curie began immediately and she broke surface in early February 1915. It was ascertained that she could be made serviceable. She was given what amounted to a raised coning tower – essential for long-term surface seakeeping – as well as more powerful electric motors, a new battery and an 88mm gun for surface attacks. She was given extra fuel-tanks, which increased her radius of operation on the surface significantly and in June 1915 she was commissioned as U-14 of the Austro-Hungarian Navy. She was to see no success under her first commander, who fell ill, but in October her new captain was to be Linienschiffsleutnant Georg Ritter von Trapp. This officer had already scored signal successes with his previous boat, U-5, and he was to prove himself the most successful Austro-Hungarian submarine ace of the war. His later career saw him as the patriarch of the von Trapp family singers – as per “The Sound of Music” and he was to be played in the movie version by Christopher Plummer.  By the end of the war von Trapp had completed nineteen war patrols, sinking over 45,000 tons of merchant shipping, plus the French armoured cruiser Leon Gambetta and the French submarine Nereide. Among his victims was the Italian bulk-carrier SS Milazzo of 11500 tons and at the time the largest merchant ship afloat. This officer’s very varied career will be the subject of a later blog. At the end of the war the U-14 was recovered by France and served in the French Navy until scrapped in 1929.

And what of O’Byrne? Though well treated in Austria, his health did not improve and he was repatriated to France, via Switzerland and the Red Cross, in 1917, dying shortly afterwards. He left his wife and two children. Rightly recognised as a hero, he was decorated as a Chevalier of the Légion d’honneur and received the Croix de Guerre.  A recognition that he might have valued even more was that the lead-vessel of a three-boat class of submarine was to be named after him. Launched in 1919, the O’Byrne was to serve in the French Navy until 1935. A similar honour was deservedly accorded to the Curie’s second in command, Pierre Chailley, killed during the Pola attack, the second boat of the class being named after him and serving until 1936.

Chivalrous by nature, and lacking employment when the breakup of the Empire cost both Austria and Hungary their coastlines, and with them their need for a navy, von Trapp fell on hard times in the aftermath of the Great War. His private life and a new career thereafter were to prove not-unwelcome surprises however. A decent man, and unwilling to compromise his principles, he was forced to flee his native country after the Nazi take-over and was to die in the United States in 1947.

As I pieced together this story I was struck by the pronounced similarity of both O’Byrne and von Trapp. Brave, resourceful and dedicated, and from very similar social and religious backgrounds, they both remained men of integrity. It’s easy to imagine them as friends in different circumstances. I found myself reminded of Thomas Hardy’s lines in his poem “The Man He Killed”:

Had he and I but met,
By some old ancient inn,
We should have sat us down to wet
Right many a nipperkin!

Yes; quaint and curious war is!
You shoot a fellow down
You’d treat if met where any bar is,
Or help to half-a-crown.