A recent blog told the story of the invention and initial testing of screw-propellers for ships, building on principles established two millennia previously. In the late 1830s the practicality of this concept was proven in a series of exhaustive tests by the experimental steamship SS Archimedes, as detailed in that earlier article (Click here to read if you missed the earlier blog). These tests included evaluation against the Royal Navy’s fast paddle-driven mail-packets and indicated that “as regards power-to-weight ratio, the screw propeller had proven equal, if not superior, to that of the ordinary paddle-wheel.” The practicality of the finding was to proved in service thereafter by a Royal Navy sloop, HMS Rattler. 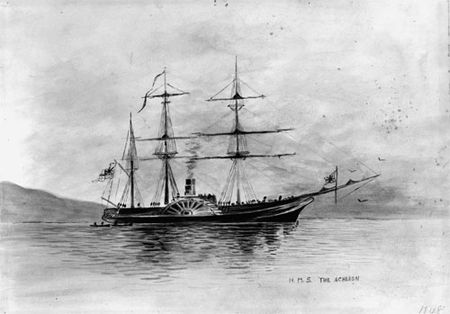 The Royal Navy had taken its first steps into the steam age in the previous decade, but the associated method of propulsion – the paddle wheel – had major drawbacks for a man-of-war, not least in that they provided a large and vulnerable target. Use of steam propulsion was therefore limited to vessels – such as mail-packets, or gunboats for colonial service – which would be unlikely to engage in combat with other ships. The screw-propeller however, located as it was below the waterline, would remove this vulnerability. The success of the Archimedes – a civilian vessel – therefore encouraged the Royal Navy to build a vessel of its own, directly comparable in power and armament to typical paddle-gunboats already in service, so as to allow directly comparative testing. 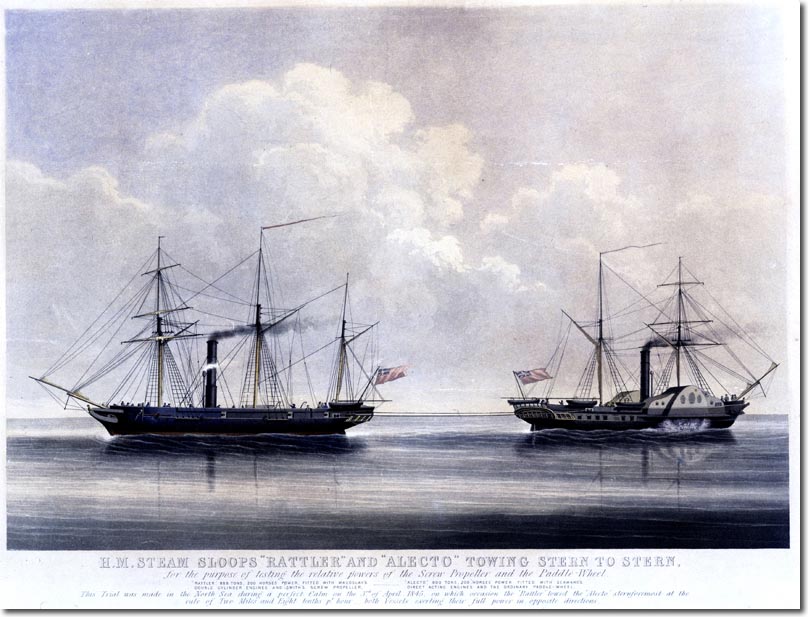 The resulting design was to be HMS Rattler, an 894-ton, 185-ft long wooden sloop powered by a 440-hp steam engine, with an auxiliary sailing rig. The latter was to remain a standard feature of practically all warship types for the next half-century since it allowed a degree of independence from coaling locations as well as economy of operation.  HMS Rattler was designed to carry a powerful armament – a single 8-inch pivot gun which could bear over a wide arc, and eight 32-pounders as broadside weapons. This armament was typical of gunboats of the period, which were more likely to be involved in shore-bombardments in remote locations than in ship-to-ship combat. 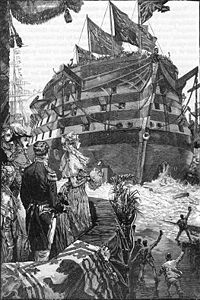 HMS Rattler was completed in 1843 and spent the next two years in trials, a variety of propeller shapes being tried out and relative efficiencies established. Later tests involved races with the generally similar, but paddle-driven, HMS Alecto. These culminated in the “tug-of-war” of March 1845 for which HMS Rattler is best remembered, when she was linked by a tow-cable stern to stern with the Alecto. Both vessels applied full power – a sight that must have been magnificent to see, waters swirling in Rattler’s wake as her propeller churned, and foam thrashing from Alecto’s twin paddle-wheels. In the event it proved no contest – HMS Rattler dragged Alecto behind her at a speed of two knots. The screw-propeller had proved itself.

Testing over, HMS Rattler was now ready to embark on her active naval career. One of her first tasks was to help tow Sir John Franklin’s ships Erebus and Terror to the Orkney Islands, the first stage of their voyage to disaster in the Canadian Arctic. She thereafter joined the “Squadron of Evolution”, one of the “Experimental Squadrons” employed in the 1830s and 1840s to test the new technologies – including improved hull shapes – then being introduced. The most notable – and impressive – aspect of this was that the trials assessed operations of vessels of differing size in a group, and not individually. If Rattler represented the future, then one of the largest ships in the squadron very definitely represented the last-gasp of the Age of Sail. HMS Trafalgar was a 120-gun first-rate ship-of-the-line, launched in 1841, in Queen Victoria’s presence. She was named by Nelson’s niece and of 500 people on board during the ceremony, 100 had been at the Battle of Trafalgar. She was powered by sail alone – she herself would not have been out of place at Trafalgar – and it was not until 1859 that she was to receive an auxiliary steam engine. The eight-ship Experimental Squadron sailed as far as South America and during part of the voyage HMS Rattler towed the 78-gun HMS Superb, launched in 1842, and herself almost identical to Nelson’s ships of four decades earlier.

Rattler’s next service was to be at the sharp-end of Royal Naval operations in the 1840s as part of the Atlantic Anti-Slave Trade patrol. The greatest hazard of this service was not associated with combat, but by being stationed off the West Coast of Africa at a time when the origin of malaria was not understood and crews were vulnerable to it when ashore. Rattler’s most notable achievement in this period was the capture of a Brazilian slave brigantine, the Alepide – the action must have provided a welcome burst of excitement in two years of otherwise monotonous patrolling. 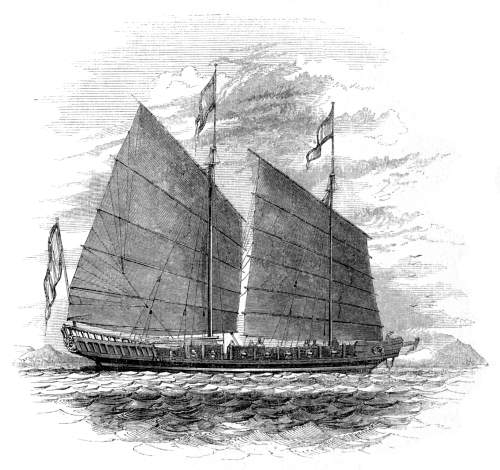 Chinese war-junk of the period

HMS Rattler thereafter went east and served in the Second Anglo-Burmese War of 1852. Her next deployment was to take her to Chinese waters. In the aftermath of the First Opium War (1839-42) Europe and and American traders were becoming active in commercial operations along the long Chinese coast. Hong Kong was one of the British spoils of that war and the focus of much of the trade. Weak Imperial Chinese power meant however that much of the coast was subject to the depredations of pirates operating from hundreds of locations along it. For many decades Western navies were to be involved in small-scale, but often very vicious, fighting to eradicate this curse. A particularly serious incident occurred in September 1855 when the pirates seized four merchant vessels at Lantau island, just east of Hong Kong. The offence was all the more serious in that the vessels were under escort by the Eaglet, a small civil vessel chartered for British naval service. HMS Rattler was to come to the rescue, operating in concert with the 2400-ton American steam-frigate USS Powhatan (a paddle-steamer!). In service since 1852, the Powhatan had accompanied Commodore Matthew C. Perry’s expedition to Japan in 1854, arguably one of the most significant events in modern history. She was very heavily armed – a single 11-inch and ten 9-inch Dahlgren smoothbores and five 12-pounders. 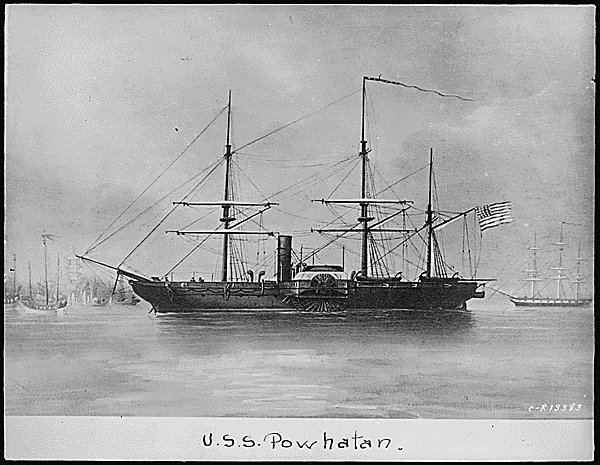 The Battle of Ty-ho Bay, in which HMS Rattler and Powhatan engaged a fleet of pirate junks, was to be one of the first occasions when British and American naval forces cooperated (The War of 1812 was still fresh in the memory of many on both sides). The opposing force consisted of fourteen large junks and twenty-two smaller ones, crewed by a total of some 1,500 pirates and they were armed with small cannon. The appearance of the British and American ships – followed by the Eaglet, towing six boats loaded with British and American seamen – induced sixteen of the junks to turn tail and escape, but the remainder stood their ground. The pirates opened fire – ineffectually, given their armament – and were now subjected to heavy fire in return. Six junks were sunk and the boats brought by Eaglet slipped their tows and headed for the remainder. Classic boarding followed – in the fine old Age of Fighting Sail tradition of “cutting out” – and fourteen junks were captured after stiff resistance and were destroyed. 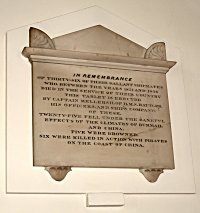 Pirate casualties were estimated at around 500 and another 1000 were captured. It is not clear what became of them (Do any readers have information?), but it not unlikely that some would have been executed subsequently. British casualties amounted to four killed and several wounded, while the Americans lost five dead.

This was to be the Rattler’s final adventure before returning to Britain, where she was scrapped in 1856. A footnote on the hazards of disease and illness while operating in Eastern waters is provided by a memorial in St. Ann’s Church, Portsmouth erected by HMS Rattler’s officers and ship’s company “In remembrance of thirty- six of their gallant shipmates who between the years 1851 and 1856 died in the service of their country”. It notes that of these “twenty five fell under the baneful effects of the climates of Burmah and China, five were drowned and six were killed in action with pirates on the coast of China.”

HMS Rattler’s life had been a short one – a decade and a half – and it was not just eventful but epoch- making too.

Antoine Vanner was recently interviewed by historical novelist D.K. Marley for her podcast. In to he discusses his motivation for writing the Dawlish Chronicles series and the practical challenges involved. Click on the arrow below to listen.