One of the pleasures of attending conferences is the pleasure of meeting face to face people whom you have already encountered on the Internet. This blog results from one such encounter. At the Historical Novel Society ‘s conference at Cumbernauld, Scotland, in August this year I met Tim Chant who, like me, is signed up to the The Aubrey – Maturin Appreciation Society Facebook page.  Tim had seen many of my posts and blogs and he introduced himself to me. We found each other to be kindred spirits especially in that Tim, like me, is interested in the Pre-Dreadnought Era as well as in the Age of Fighting Sail. More details about him and his work can be found at the end of this article. I accordingly invited Tim to provide a guest blog on a topic of his own choosing. He came up with a splendid one – and incident during the Russo-Japanese War of 1904-05 which almost brought Britain and Russia to the edge of conflict. Over to Tim!

Events at sea can be the trigger for war just as victories at sea can be decisive in finishing them. From the War of Jenkin’s Ear to the Tonkin Gulf Incident, by way of the War of 1812 and the sinking of the Lusitania, nations have come into conflict with each other or been drawn into wider wars by maritime events. This can be over access to resources – as in the Anglo-Dutch Wars and the Cod Wars – or a trigger point that has inflamed existing tensions. Even today maritime borders are places of contention, ranging from the so-called Scallop Wars in the Channel to the altogether more serious provocations in the South China Sea. 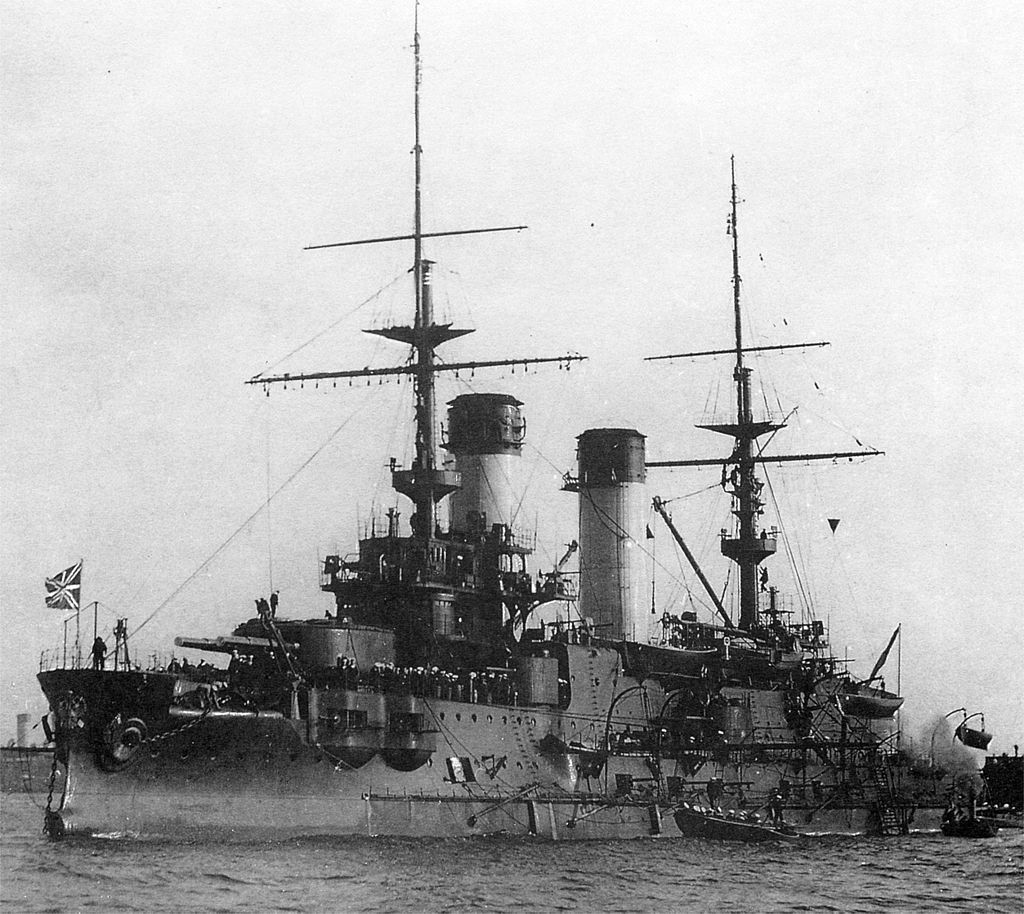 A ‘near miss’ was the Dogger Bank Incident of October 1904. The Russian 2nd Pacific Squadron had been sent from the Baltic to relieve the blockade of Port Arthur – Tsar Nicolas II’s much coveted warm water port – and defeat Admiral Tōgō Heihachirō’s fleet. This would restore Russian honour and fortune in the Russo-Japanese War (1904-5). Commanded by Vice-Admiral Zinovy Rozhestvensky, the squadron was centred on the four new Borodino-class battleships. The 18,000 mile journey undertaken was a remarkable feat of endurance and seamanship, but the incident in the North Sea foreshadowed the disasters that were to come.

After midnight on 21st October, the squadron was passing through the North Sea, in heavy fog. The Russians were in a state of anxiety due to far-fetched reports the Japanese, with Britain’s connivance, had send torpedo boats to the area. What followed was a mix of farce and tragedy, as the squadron stumbled into the Gamecock fishing fleet out of Hull and promptly opened fire. 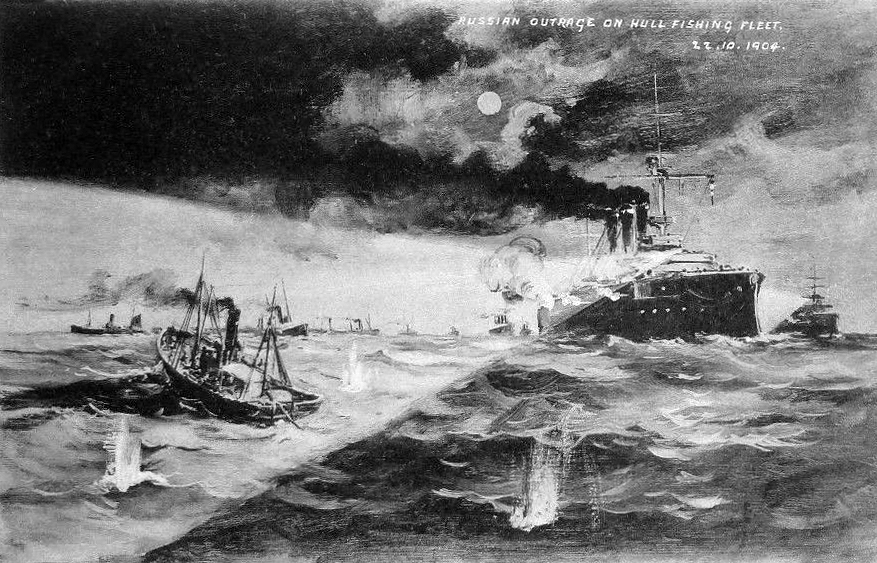 A contemporary postcard, showing one of the trawlers under fire from a Russian ship

The Russian battleships poured fire into the trawlers – clearly illuminated with searchlights – for twenty minutes, believing there were torpedo boats amongst them. Trawlermen resorted to holding fish overhead to demonstrate their purpose, to no avail. 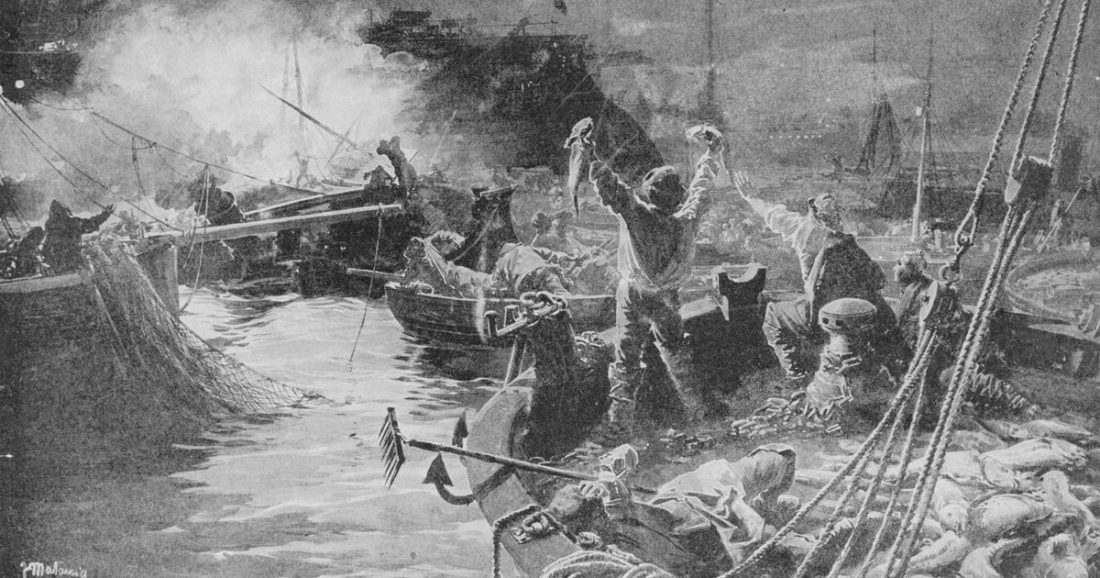 Contemporary image of trawlermen holding up fish to prove their identity

The Russian sailors fired with wild abandon, sinking the trawler Crane with the loss of two lives. Only poor gunnery prevented a greater disaster – the older battleship Oryol (a sister of the Borodino) discharged five hundred rounds with no effect. The Russians only switched heavy fire away from the trawlers, bravely steaming to reach the stricken Crane, when a brisk exchange of fire developed with ‘Japanese cruisers’ – what turned out to be their own cruiser squadron, 50 miles away from their assigned course. At least two men aboard the cruiser Aurora lost their lives. 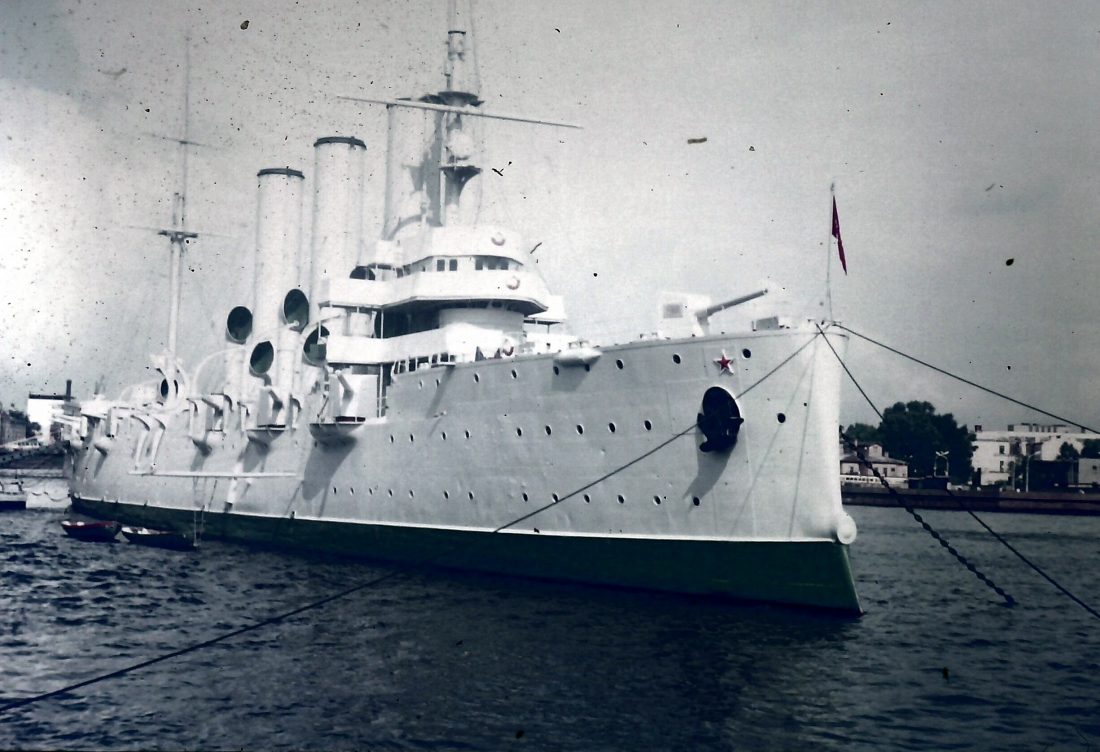 The Aurora – photographed by Antoine Vanner in Leningrad in August 1971

The Russians sped from area, fearful of further attack and convinced they had triumphed ove r the enemy. They had cleared the Channel by the time word reached London. Outrage spread through Britain. The Channel Fleet, under Lord Charles Beresford, put to see to shadow the squadron until Tangiers.

Rozhestvensky had stumbled into a complicated web of international relations. Britain, concerned about Russian expansionism, had entered into a formal alliance with Japan in 1902. This was to reshape Britain’s relations with Europe, shifting traditional alliances away from Germany and towards France. This kept France out of the war between Russia and Japan, helping to check Russian expansionism to the East and bolstering Britain against the rising power of Germany. Calm heads prevailed. Concessions were extracted from Russia, including compensation and an inquiry. Britain contented herself with making the Russian journey as difficult as possible wherever possible. While war was averted at this stage, the incident serves as a chilling foreshadow of what was to come a decade later, when naval rivalry and a web of alliances drew the same players into the Great War. 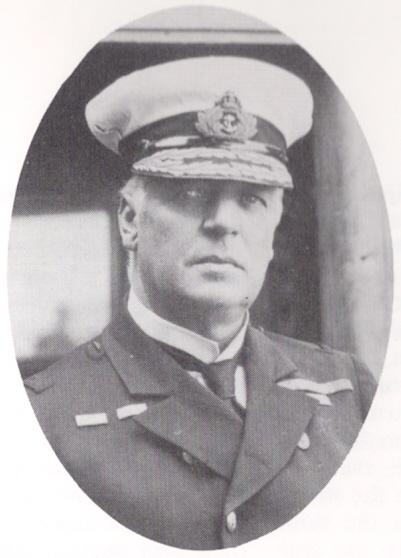 The Dogger Bank Incident also exacerbated personal conflicts that had far-reaching consequences. One such was the famous feud between Sir John Fisher, who had taken office as First Sea Lord hours before the incident, and Lord Charles Beresford, C-in-C Channel Fleet. (Click here to see him feature in an earlier blog).  The two admirals had never got on; however relations had been quiescent since the two had served in the Mediterranean Fleet. Beresford’s plan in case of conflict was to engage with only four of his eight battleships unless, in his words, ‘the Russian ships had commenced to knock my ships about’. Interestingly, this matches Rozhestvensky’s estimation that total broadside weight – very much an obsession in public discourse – didn’t matter and that only the first four ships and then the four after them counted. This, of course, was a nonsense born of outdated chivalric notions. Even in the Age of Fighting Sale, ships could find themselves fighting multiple opponents. 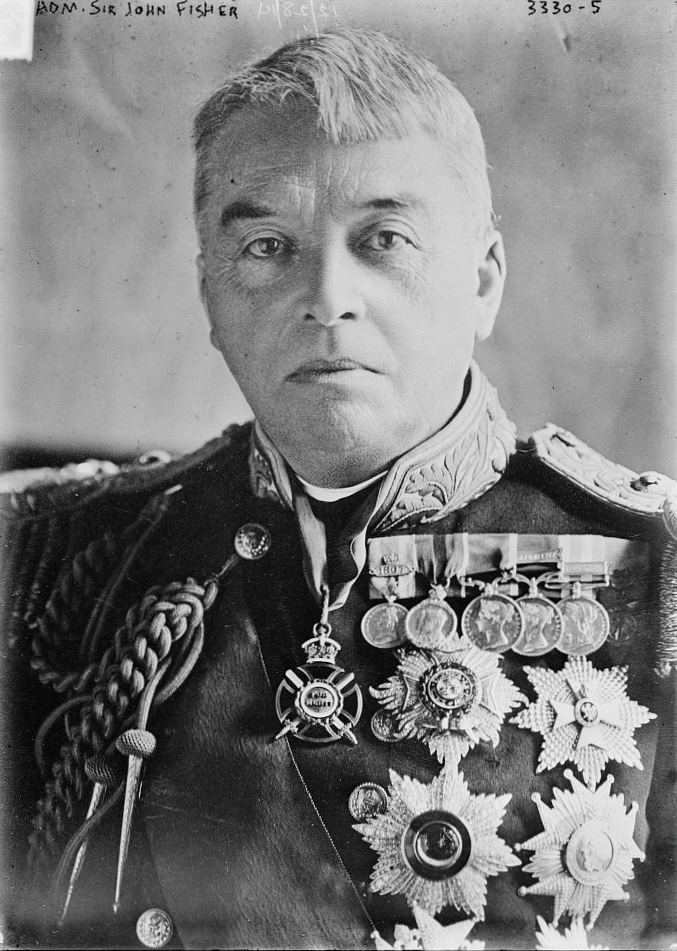 Fisher, whose three ‘Rs’ were Ruthless, Relentless, Remorseless, was livid when he saw Beresford’s plan. He accepted nothing less than bringing overwhelming force to bear, and he wrote that it ‘could not have been justified on any grounds, and least of all on those of sentiment’. Fisher planned to relieve Beresford a month early and pack him off to the much-diminished Mediterranean Fleet. Lord Charles – a capable sailor but something of a buffoon – bridled, going as far as telling his replacement that he would be happy to give him lunch or fight him, but that he would not be superseded. Fisher was persuaded to back down by First Lord Selborne, on the basis that it would be better that Beresford serve out his time and go to the Med rather than take his seat in Parliament. This re-opened old wounds. Beresford, deeply opposed to change and harbouring a desire to be First Sea Lord, began to demonstrate extraordinary insubordination to the ‘Oriental gentleman’ as he was pleased to describe Fisher. He used his wealth and influence to chip steadily away at the monolithic Jacky Fisher, leading to his downfall in 1909.  It was an episode that brought credit to no-one, and was prejudicial to discipline and efficiency in the service that both men admittedly loved.

A similar conflict was being played out amongst the Russian officers. A staff officer, Captain Klado, had achieved influence beyond his rank through careful use of the press and the patronage of powerful men. He had opposed the plan to take the more modern Russian warships, instead advocating the dispatch of anything that could float – on the basis that more ships would split the Japanese fire. Rozhestvensky was ordered to leave culpable officers behind to attend the international enquiry, and used this as an excuse to rid himself of Klado. While that may have been satisfying in the short-term, it would come back to haunt him. On his return to Russia, Klado once again militated for the dispatch of the older ships. Without strong opposition, he had his way and the 3rd Pacific Squadron was assembled from what was left, including coastal defence ships that should never have ventured beyond the Baltic. Under the unflappable Nikolai Nebogatov, the 3rd Squadron caught up with Rozhestvensky in French Indochina not long before the battle of Tsushima. 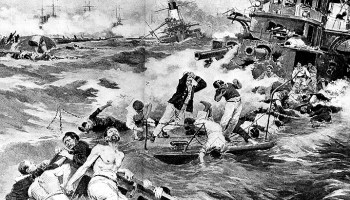 The Battle of Tsushima, May 1905, the crushing defeat, in the strait separating Japan and Korea,that awaited the Russian 2nd Pacific Squadron after its epic voyage from the Baltic.

The Japanese, of course, did not attempt to match just four of their own battleships against the Russian battleline; nor did the ‘self-sinkers’ diffuse Japanese fire. While the fleets were, on paper, reasonably evenly matched, Japanese training, discipline and suicidal courage triumphed. The Russians fought bravely, stoically enduring a furious bombardment. Although gunnery had improved since the poor showing in the North Sea, it could not match the Japanese rate or accuracy. Poor command and discipline was also still in evidence, echoing the events in the North Sea when Rozhestvensky to personally manhandle a gunner to stop him firing. While there is much to be admired in the epic journey to the far side of the world, the Dogger Bank shambles showed that the expedition was doomed. It fell to the unfortunate Nebogatov, commanding the remnant of the Russian fleet, to haul up Japanese flags over their own to signal their surrender on May 28th 1905.

Tim Chant is an Edinburgh-based author. He publishes science fiction as T.Q.Chant and, as T. J. Chant, has contributed to the Heroes of Normandy anthology (Click title for details). He’s currently working on a historical naval adventure set around the turn of the 20th Century, according to himself “along with probably too many other projects”!