The war fought by Britain, France, Turkey and Piedmont in 1854-56 is normally referred to as the “Crimean War” since it was in the Crimea, on the northern shores of the Black Sea, where most of the combat took place. The Allied forces concentrated on besieging the great Russian naval base at Sevastopol and on destroying the fleet bottled up there and the siege, imagined initially as likely to be of short duration only, was to drag on for a year and a half, causing vast suffering to both sides. The first British action in the Black Sea involved  bombardment and blockade of  Odessa (Click to read article on this). Attacks were also made  however in peripheral and far-flung theatres far from the main theatre of war such as the North-West Pacific (Click here to read). Another such subsidiary action was the Danube Mouth raid in 1854. 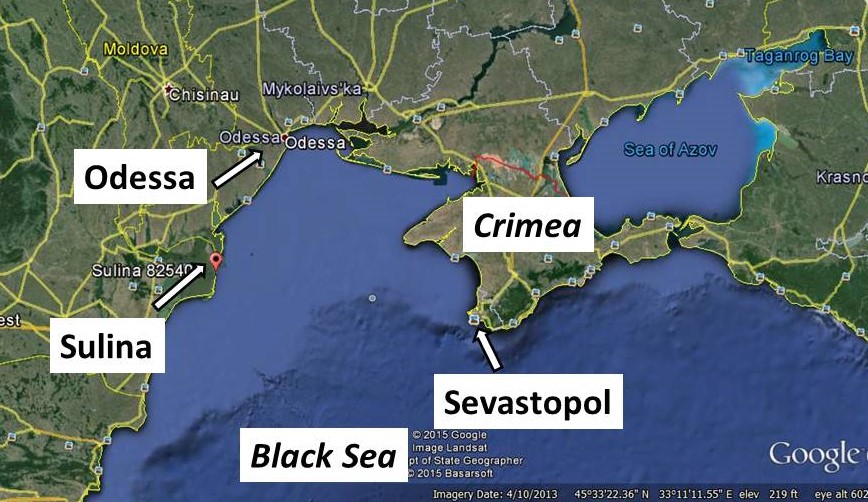 Once Odessa and Sevastopol were cut off from the sea, the Royal Navy’s main contribution was support of the siege of Sevastopol by large scale but mainly ineffective bombardment as well as by escorting shipping bringing supplies northwards from Constantinople/Istanbul. 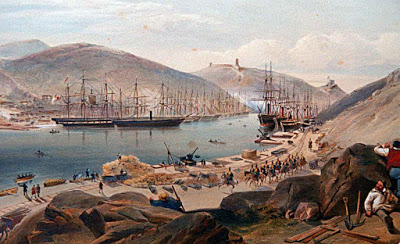 A major role for the Royal Navy – securing supply lines by sea. Here is British shipping in Balaclava Harbour, near Sevastopol

Some limited harrying of the extensive Russian coastline was also undertaken since, with the Allies having control of the Black Sea, the possibility always existed of them landing troops at some other point. We know in retrospect that the Allies were too stretched to do this but this has the benefit of hindsight. The danger could not be discounted at the time and each pinprick attack on the Russian coast demanded diversion of Russian forces that might otherwise been valuable in helping raise the Sevastopol siege. 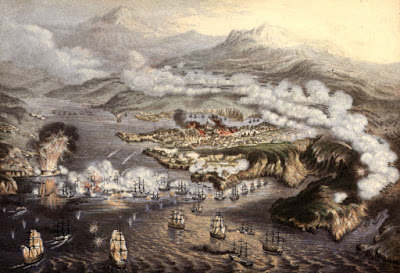 Sevastopol under bombardment from the sea as well as from land

An early instance of such action was at Sulina, at the mouth of the Danube, and it took place in June 1854, even before Allied troops were landed near Sevastopol. The town of Sulina was of importance in peacetime as it was the export point for the vast grain production in the provinces of Wallachia and Moldavia. The channel had not yet been dredged – as it later was – to allow large ships to move upriver. Grain accordingly came downriver to Sulina in barges and was transhipped there into sea-going vessels. 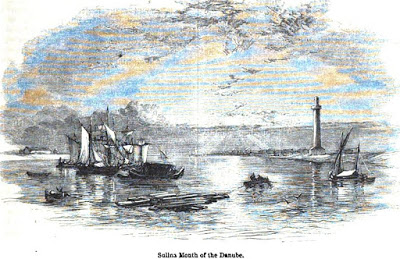 Two Royal Navy paddle sloops, HMS Firebrand, commanded by Captain Hyde Parker, and HMS Vesuvius, commanded by a Captain Powell, were tasked with closure of the Danube. (Readers of this blog may remember Firebrand being in action against  Argentinian forces in 1845 – click here).  The initial action was on 22nd June 1854 when pulling boats from both ships, supported by a Turkish gunboat, carried landing parties to attack a guard-house and signal-station some twenty miles north of Sulina. As they approached, Russian signals rippled along the coast, from station to station, to summon aid. A body of Cossack cavalry was posted close to the landing point  but it pulled back as it came under fire from the vessels close inshore. Sheltered by this fire, the British seamen and marines landed from their boats, formed up on the beach and advanced in skirmishing order towards the Cossacks, who retreated on horseback.  The station was immediately burnt, the signal-staff destroyed, and the landing parties returned to their ships in good order and – one must assume – high good spirits. 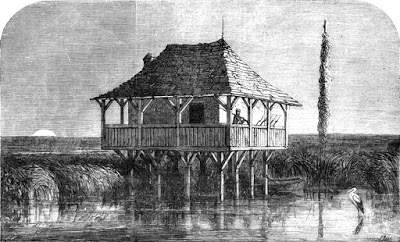 In the following days several other stations were destroyed in the same way  and on the night of the 27th June, Captain Parker raided the garrison of Sulina itself, though his force withdrew afterward and the town was not held. Among the prisoners taken was the Russian commander. The operations so far had been exemplary – minimal force for maximum effect – and they were keeping up the tradition of aggressive small boats raids and cuttings-out of which the Royal Navy had made such deadly use  in the Napoleonic period.

Firebrand and Vesuvius now maintained a strict blockade of the Danube and landing parties continued to operate with impunity.  Parker did however come to suspect that Russian forces had reoccupied a “Gabion” battery  (essentially an earthwork) on the quarantine ground close to Sulina – the location where crews suffering from  infectious diseases would normally be confined. On  6th July therefore boats from both ships carried parties to investigate and, if required, to storm the position. Parker himself took command.

There was no sign of Russian presence until Parker’s own boat was close to the position. A single rifle-shot then flashed in the darkness and a volley followed, rounds thudding into the boat, one grazing Parker’s elbow, and another severely wounding one of the men. Parker immediately  ordered the boat to pull round, and, as she retreated, he shot his own rifle back towards the enemy, which by now were pouring in a galling and heavy fire on all the boats. One of these, a pinnace, grounded within fifty yards of the battery, putting its occupants at high risk.

Parker now decided – probably unwisely, since surprise was lost – that landing was now his best option. The boats headed shorewards and he seems to have been the first to leap from his craft, shouting in the best tradition “We must storm — follow me, my men!”  He and his followers rushed towards a line of high canes growing parallel with the river, and about fifteen yards from it. He advanced along this, firing, and knocking down a Cossack who confronted him. He paused to reload and in doing so was killed by a burst of Russian fire, one round of which took him in the heart. He fell into the arms of his coxswain and command devolved to his deputy, a Commander Powell. This officer seems to have been less precipitate and more cautious, since before advancing further he directed the boats to open fire on the battery with the light cannon mounted in their bows and with the Congreve rockets that some carried. The rockets, though difficult to aim and range with accuracy, were especially valuable since, like mortar shells, they could drop on targets invulnerable to direct gunfire. This barrage gave sufficient support  for  the marines and seamen to storm the position and drive the Russians back into a marsh beyond where, wisely, they were not followed.

The final onshore action came a week later. On 13th July a paddle gunboat, HMS Spitfire – of shallower draught than either Firebrand or Vesuvius – towed the latter’s boats across the bar at the Danube mouth. She opened fire on Sulina directly, driving off the Russians who had reoccupied it after the previous raid. This time there was no holding back. The marines and bluejackets who landed burned the town to the ground.

Parker’s death aside, these operations can only be regarded as text-book examples of economic use of  resources, which by their very aggressiveness secured a moral superiority that forced the enemy to divert resources that could be better employed elsewhere. In their way they were forerunners of successful commando ”hit and run” raids in WW2.