A recent blog dealt with an 1876 case of a ship “passing by on the other side” and not rendering assistance to a wrecked vessel (click here to read this article). An even more extreme case occurred the same year. In this “Hit and Run” incident, one ship, the SS Franconia, caused a collision that sank  the SS Strathclyde and thereafter ignored the plight of her survivors without any significant effort to render assistance.

On the afternoon of February 17th 1876 a large British trading steamer, the SS Strathclyde – 1950 tons, 290 feet – was in the English Channel, just off Dover, on the first leg of a voyage to Bombay. She carried a crew of 47 as well as 23 passengers. The weather was fine, “with a fair wind”, visibility good and the sea relatively smooth. The SS Strathclyde was making some nine knots. A generally similar ship was spotted about two miles astern and still further out to sea and it was estimated that courses, if maintained, would cross. The stranger turned out to be the German Franconia, en route for the West Indies, and steaming at higher speed than the SS Strathclyde. As the faster vessel. the Franconia was expected to take evasive action and on this assumption the SS Strathclyde held a steady course. A half-hour passed, during which time the Franconia had all but overhauled the SS Strathclyde and was giving no indication of altering her course – indeed, according to one contemporary account “the Franconia came down upon the SS Strathclyde as if she had been an enemy’s vessel in time of war.” 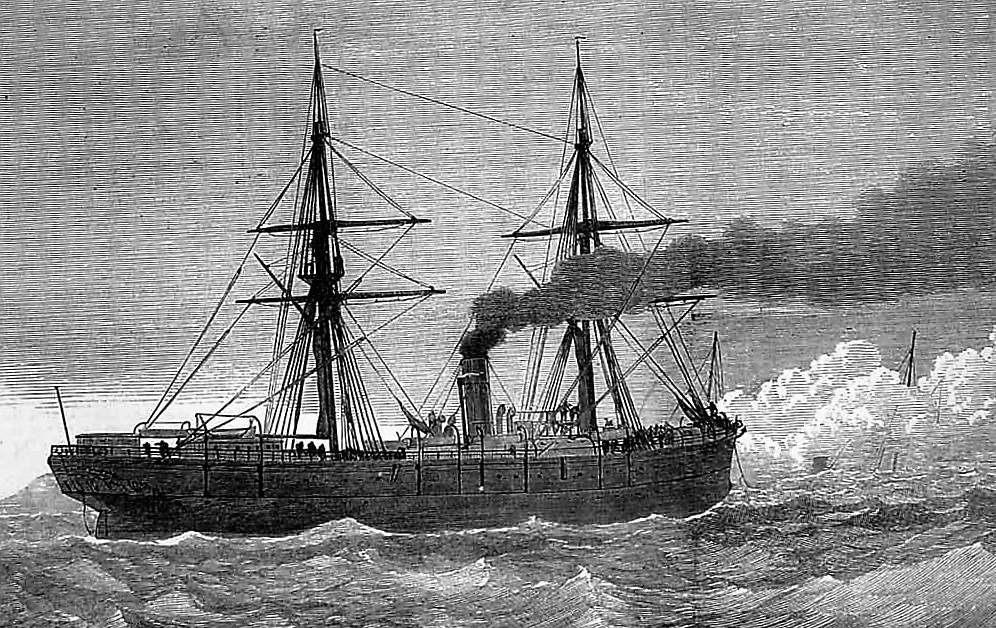 A contemporary illustration shows the Franconia reversing from the SS Strathclyde
The clouds of steam enveloping the latter may have been artistic licence!

The Franconia’s bows had been damaged, but not fatally so, but the over-riding desire of her captain, one Ferdinand Keyn, was to get his ship safely into the nearby harbour of Dover. He was encouraged in this by James Porter, a British pilot taken on board for the transit of the Dover Straits. The SS Strathclyde’s first mate and four seamen seem to have managed to jump across to the Franconia before the ships separated, reporting later that discipline seemed to have broken down there. They urged Captain Keyn to drop boats for the SS Strathclyde’s survivors but he was deaf to their appeals. After no more than a few minutes, with feeble attempts at rescue, the Franconia backed off and headed for Dover.

Two of SS Strathclyde’s lifeboats got away, the first with fifteen of the women passengers but it was quickly swamped, most of the occupants drowning. The second boat got off safely and recovered two living survivors from the water. The ship disappeared in less than ten minutes and took many with her. A fishing lugger from Deal, the Early Morn, arrived on the scene and pulled survivors from the water. The Dover lifeboat had been launched – the whole tragedy had played out so close inshore as to be plainly visible – and was towed towards the stricken vessel by a harbour tug. The final death toll was 38, out of a total 70 crew and passengers.  The SS Strathclyde’s captain, J.D. Eaton, stayed with her until the final plunge but he did survive. 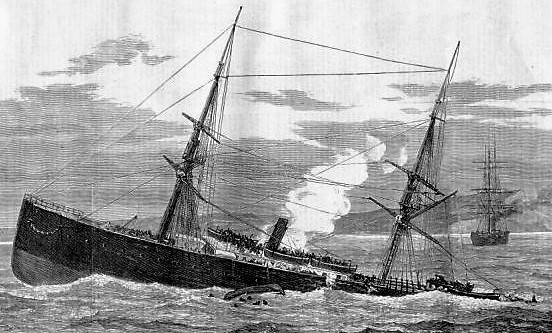 The Strathclyde’s last moments. Note Franconia on right and heading for Dover

The Franconia reached Dover safely but her Captain Keyn was charged with manslaughter for his unwillingness to render sufficient assistance. Considerable opprobrium was also heaped on the British pilot on board, of whom it was written at the time “Let us hand James Porter’s name down in infamy; let us blush to think that he could call himself an Englishman!”

Keyn’s trail, at London’s Central Criminal Court, was to have implications beyond the immediate case. He was convicted as charged, but the verdict was quashed on appeal.  The grounds for this rested on the argument that English Law was not applicable to foreign vessels in English waters. Sufficient feeling was however aroused by the case that soon thereafter Britain adopted International Territorial Waters provisions which were already in use by several other countries. These defined such waters as extending three miles from the shoreline, this distance reflecting the contemporary range of coastal artillery.  As for the owners of the SS Strathclyde, they brought and action against the Franconia’s owners in the Admiralty Court and were awarded £45,000. It seems a very paltry sum in view of the loss of life.