The Imperial German Navy that went to war in 1914 was essentially a creation of previous four decades. One tends to think of it in terms of its squadrons of superbly engineered battleships and battle-cruisers, designed primarily for the anticipated show-down with the Royal Navy in the North Sea. It was however with smaller vessels on remote locations that the most action had been seen by German naval personnel and such service was a vital element in developing the leadership and expertise of officers and ratings alike. Operations to protect trading interests in China, or in support of colonial ventures in Africa and in the Pacific, or in projecting German influence in the Caribbean, all involved light cruisers and smaller ships, some of which saw very active service indeed. 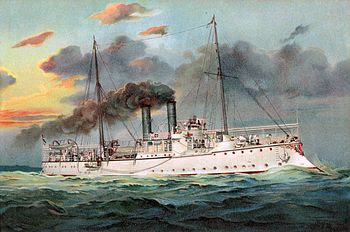 One such vessel was the gunboat SMS Panther, which in this blog has been seen in action in Venezuelan coastal waters in 1903 (Click here to read the article about this). Her presence at the Moroccan port of Agadir in 1911 was to be interpreted as a hostile act by the French Government – which regarded Morocco in its sphere of influence – and the resulting crisis all but plunged Europe into World War I three years too soon. Before either of these events however the newly-built Panther had already played a violent international role, though against an adversary so weak that the rest of the world took little notice. 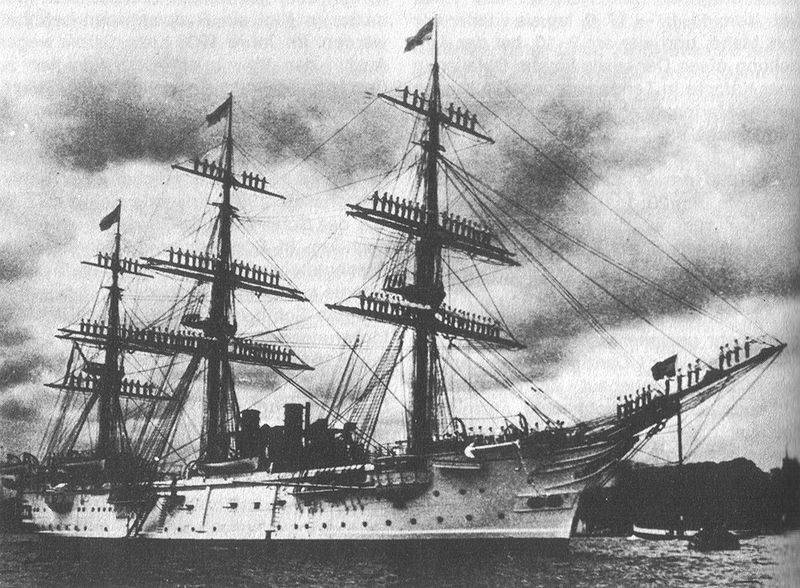 The history of the Caribbean nation of Haiti had been a sad one ever since achieving independence in 1804.  Poverty, the threat of foreign intervention, negative racist attitudes by many nations towards the world’s only “Black Republic” established by ex-slaves and a succession of coups and countercoups held back development and left its people in abject poverty. In 1897 the Imperial German Government – flexing its new naval muscles – sent two warships, SMS Charlotte and SMS Stein, to intimidate Haitian president into apologising for the attest of a certain Emile Lüders, born in Haiti but whose father was German, who had been involved in a brawl. The affair was a trivial one – Lüders, though sentenced to a year’s imprisonment, had already been pardoned by the president and had left the country six weeks before the German warships arrived. Despite this, Haiti was forced to accept a humiliating climb-down –compensation of ,000 for Lüders, a promise that he could return to Haiti, a letter of apology to the German government and a 21-gun salute to the German flag. Four hours were allowed for acceptance, which was to be accepted by raising of a white flag over the presidential palace. Out-gunned, Haiti had no option but to comply. 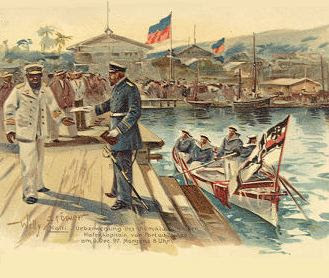 Humiliation, 1897: the German ultimatum is delivered to Haiti.

Haiti’s navy consisted of a single modern vessel, the gunboat Crête-à-Pierrot which had entered service in 1896. Built in Britain, at Earle’s shipyard in Hull, this 950 ton single-screw vessel was armed with one 6-inch gun, one 4.7-inch, four 4-inch and several machine guns. Command of the Haitian navy fell to Admiral Hammerton Killick (1856 – 1902), of mixed Haitian and British descent. His job must have been an almost impossible one for shortage of funds meant that payment of crews was irregular, food insufficient and cannibalisation of parts essential to ensure operability. It was not a good foundation from which to confront the Imperial German Navy when it would next come calling.

In 1902 Haiti was plunged yet again into one of the interminable civil conflicts that had bedevilled it nce independence. This had resulted from disagreements between two political leaders, Anténor Firmin and Pierre Nord Alexis, as to who should succeed a president who had just resigned. Admiral Hammerton Killick threw his support behind Firmin and proceeded to use the ships available to him to blockade the ports held by Alexis’s forces. This affair would have remained a local one had Alexis not ordered ammunition from overseas and it was carried on a German ship, the Markomannia, of the Hamburg-Amerika Line. This ship was intercepted by Killick’s Crête-à-Pierrot, searched and it cargo confiscated, the munitions on board being transferred to the Haitian gunboat. The Markomannia was then allowed to proceed unhindered.

German prestige was judged to have been damaged by the Crête-à-Pierrot’s action, a stance that was strengthened when Alexis – the Haitian leader who had been deprived of his ammunition – appealed for help to eliminate “a pirate ship.” The task was allocated to a recently commissioned German gunboat, SMS Panther, a 1200-ton, 210-foot vessel armed with two 4-inch and six 1.5-inch guns, plus lesser weapons. Given the differences in resources, training and professionalism, the contest was going to be an unequal one.

The Crête-à-Pierrot was in the harbour of Gonaïves, on Haiti’s north-west coast, when the Panther arrived on 6th September 6. Hammerton Killick and most of the crew were on shore but he rushed back to his ship. Realising that resistance would be futile, he ordered the crew still on board to leave and then, in an insane act of defiance, wrapped himself in a Haitian flag and blew up the aft magazine. As the shattered Crête-à-Pierrot settled she took with her not only Killick but four crew members who had remained with him. His action had been eerily similar to that of the Dutch Lieutenant Jan van Speijk at Antwerp in 1831 (Click here to read an article about this).

The Panther was not finished however – she poured some thirty shells into the wreck before  departing, leaving Haitian forces to salvage whatever weapons and munitions they could. It was hardly a victory to boast of. It is interesting to note that the United States did not object to the German action as a violation of the Monroe Doctrine. The State Department apparently endorsed the action and the New York Times stated that “Germany was quite within her rights in doing a little housecleaning on her own account”. One cannot but have an uneasy feeling that a degree of racial prejudice was involved in this stance since the next time the SMS Panther went into action, against Venezuelan defences in 1903, it led to the so-called “Roosevelt Corollary to the Monroe Doctrine.” This asserted a right of the United States to intervene to “stabilise” the economic affairs of small states in the Caribbean and Central America if they were unable to pay their international debts, in order to preclude European intervention to do so.

And Hammeton Killick? Though his sacrifice may look in retrospect to be a futile one, he came to be regarded as a national hero in Haiti. A stamp bearing his likeness, and with a picture of the Crête-à-Pierrot exploding, was issued by Haiti in 1943. It seems like a poor compensation for five lives, his four crew members’ as well as his own.