Part 1 of this article (click here to read it if you missed it) saw the Austrian Admiral Wilhelm von Tegetthoff (1827-1871) driving towards the Austrian-held island of Lissa and the Italian fleet that had been bombarding it.  Now read on … 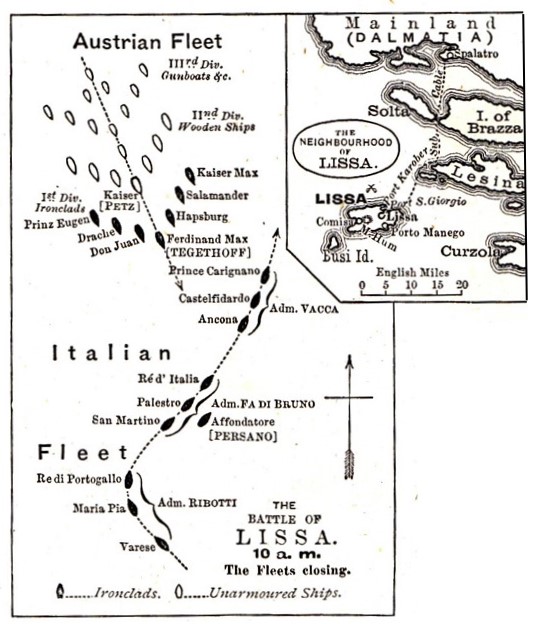 Tegettoff’s force advanced in three successive divisions, ironclads, wooden frigates and, finally, the smaller vessels, each in a wedge-shaped formation (see diagram above), with the apex toward the enemy. The object was to drive through the Italian line, if possible near the van, and bring on a melee in which all ships could take part, ramming tactics could be employed, and the enemy would profit less by its superiority in armour and guns. Tegetthoff’s tactic depended on aggression and confidence, matching them against a hesitant and passive enemy commander, the Italian Admiral Carlo Persano.

The Italians had been caught at a disadvantage. On the previous day the Formidabile, one of their better ships, had been put out of action by Austrian shore batteries on Lissa. Another, coming from the west end of the island, was too late to take part in the action. The commander of the Italian wooden ships, one Albini, was reluctant to risk them, despite Persano signalling desperately to them to come around the Austrian rear. Persano formed three divisions with his ironclads, each of three ships, and he swung across the enemy’s bows in line ahead. At this critical juncture, and for no obvious reason, he shifted his flag from the Re d’Italia in the centre to the Affondatore, which was steaming alone on the starboard side of the line. The change was not noted by all his ships, and confusion of orders inevitably followed. The consequent delay also left a wide gap between the Italian van and centre divisions and through this the Austrians drove, with Tegetthoff in his flagship Erzherzog Ferdinand Max leading the way. 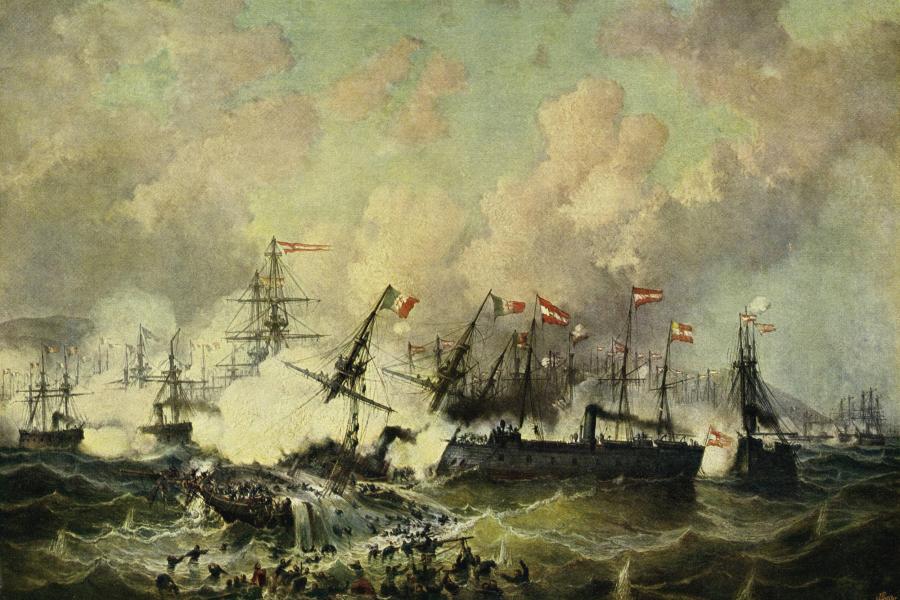 Contemporary painting – the confused-melee nature of the action is obvious

From this point on, formations became almost meaningless, a confused fracas in which the two forces rammed or fired into each other in a fog of smoke and spray. The Austrian left flank and rear held up the Italian van while their ironclads attacked the Italian centre. The wooden ships of the Austrian middle division displayed none of the hesitation of their Italian counterparts. Led by the 92-gun Kaiser, essentially a traditional wooden ship of the line equipped with a steam engine, they smashed into the Italian rear. The Kaiser, an obsolete relic, was to endure the hardest fighting of the battle. She twice avoided the Affondatore’s ram though she was struck by one of her 300-pound projectiles. The Re di Portogallo then bore down on her but her Captain Petz rang for full speed ahead and steered for the ironclad, striking a glancing blow and scraping past her, both ships blazing at each other as they passed. The Kaiser thereafter withdrew, her foremast and funnel down and a fire burning amidships. Altogether she fired 850 rounds in the action, or about one-fifth of the total fired by the Austrians, and she received 80 hits, about one-fifth of the total. Of the 38 Austrians killed and 138 wounded in the battle, Kaiser lost 24 and 75 respectively. 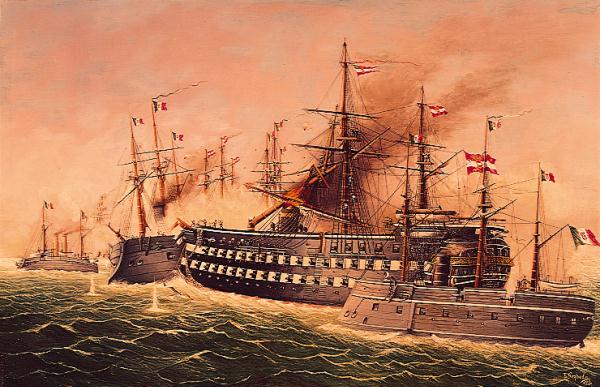 Similarly fierce action was in progress elsewhere. The Italian gunboat Palestro was forced to withdraw to fight a fire that threatened her magazines. The ironclad Re d’Italia, which was at first supposed by the Austrians to be Persano’s flagship, became a focus of their attack and her steering gear was disabled. As she could move only straight ahead or astern, Tegettoff seized his chance. He rammed her squarely amidships at full speed with the Erzherzog Ferdinand Max, smashing through her armour and opening a huge gash. The Re d’Italia heeled over to starboard, lurched back again, then sank almost immediately, taking 381 of her crew with her. 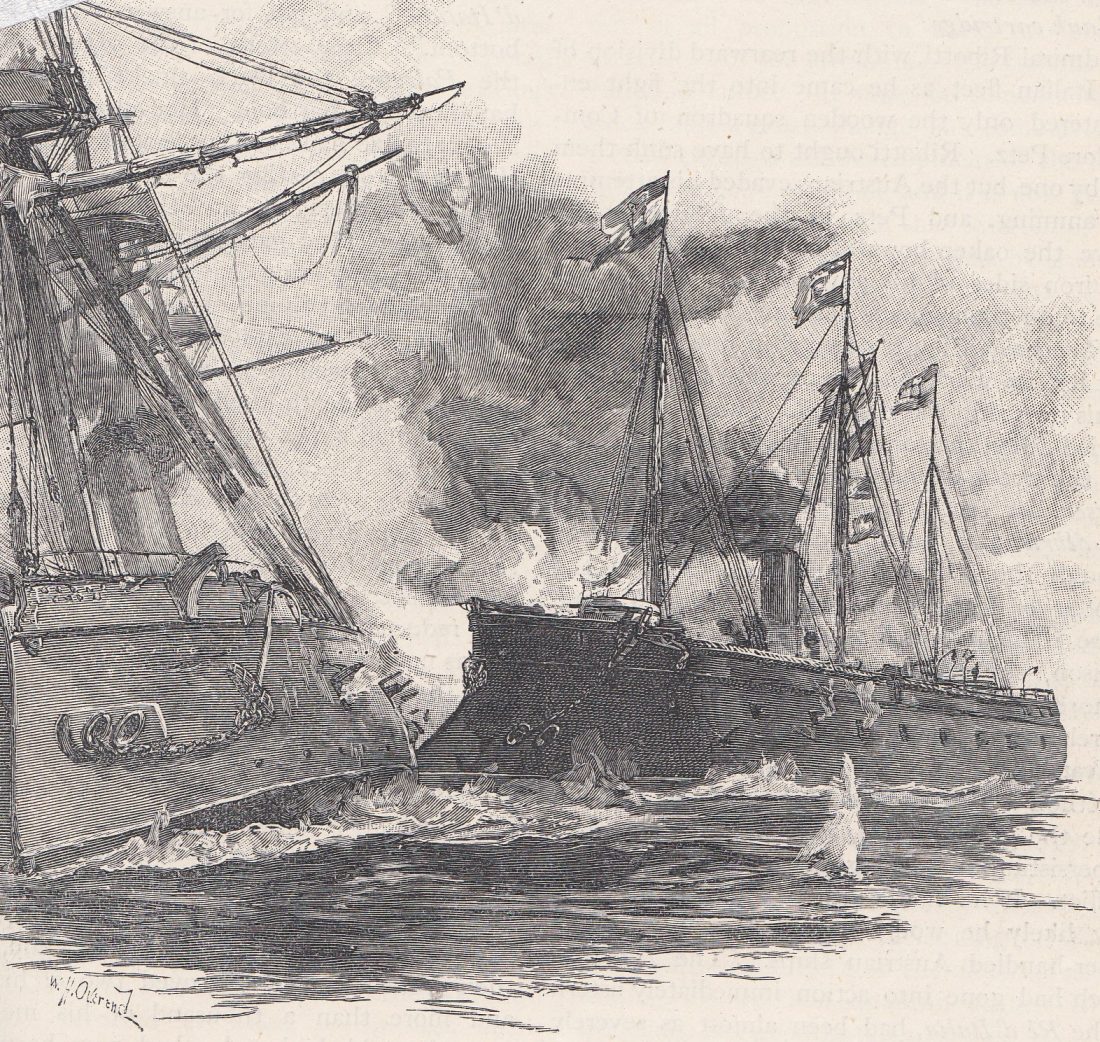 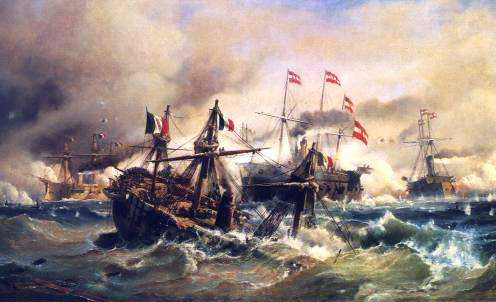 This dramatic sinking essentially decided the battle. The fighting had lasted little more than an hour before the Italians withdrew westwards, allowing Tegettoff to bring his force into Lissa’s fortified harbour of San Giorgio. The fire on the Palestro reached her magazine as she retreated and she exploded with the loss of 231 of her crew. Other than this vessel, and the Re d’Italia, the Italians’ other losses were slight – 8 killed and 40 wounded. Their ships were badly battered however and soon afterwards the Affondatore sank in Ancona harbour, unable, due to her battle damage, to resist a squall. 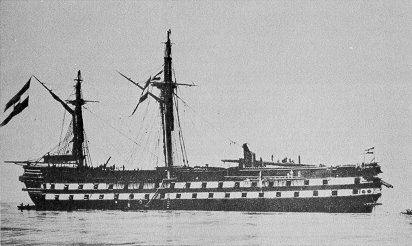 Tegettoff’s victory had no impact on the outcome of the war, which had essentially been determined by the Prussian land victory at Königgrätz. Despite defeat by land and sea at Custoza and Lissa, Italy was awarded Venetia in the peace negotiations. The most notable naval consequence of the Lissa battle was the exaggerated value many assigned to ramming as a tactic, thereby making a ram bow a feature of almost every warship, large or small, up to World War I. The most valuable lesson was that a passive and defensive policy, such as Persano had adopted, would always fail if confronted by a determined and aggressive enemy. There have been few better examples than Lissa of the American Admiral Farragut’s belief that “iron in the ships is less important than iron in the men”. 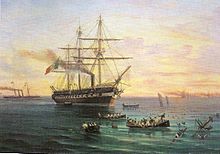 It is surprising, in view of the facts, that Persano announced a victory when he returned to Italy, thereby triggering widespread celebrations which was dampened when the full story was made known. He was to suffer the humiliation of being arraigned before the Italian Senate and being dismissed from the navy on the basis of cowardice and incompetence. 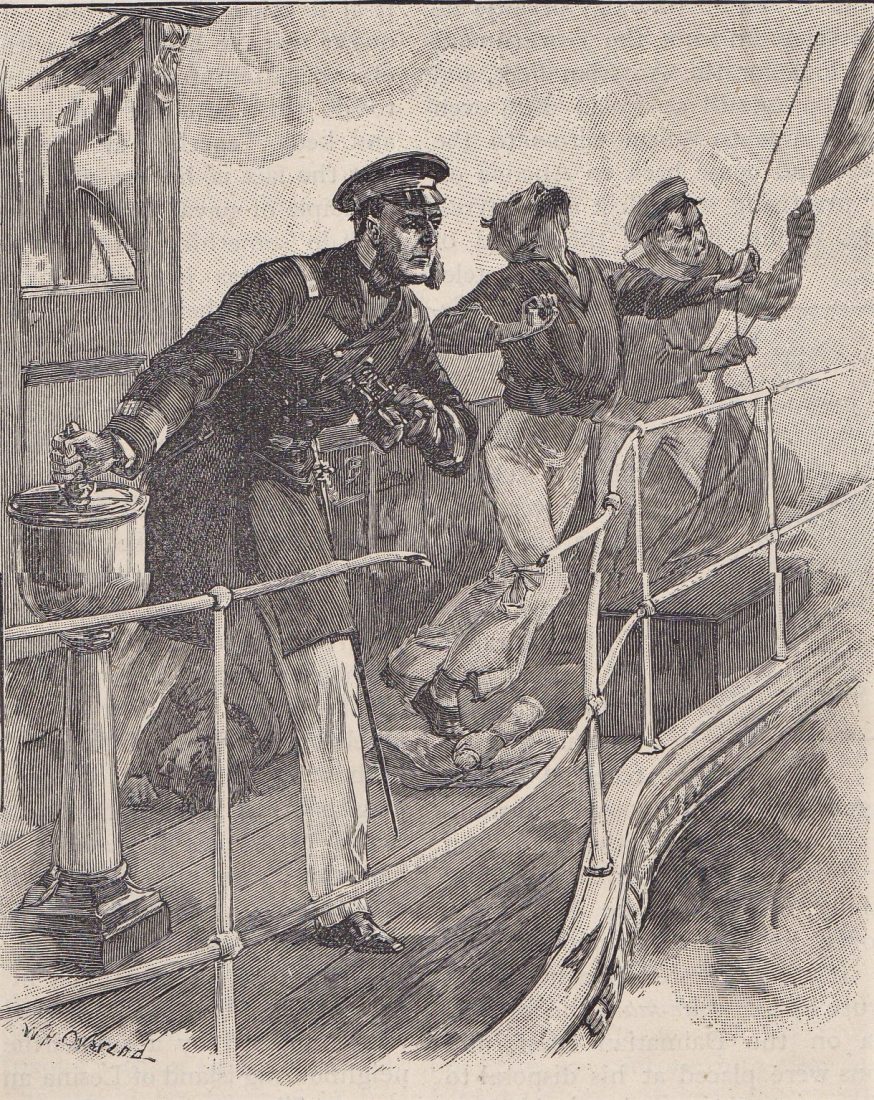 Tegetthoff on his bridge at the height of the battle

Tegetthoff, still only 39 at the time of his victory and had only five years to live before he was struck down by pneumonia. Deservedly promoted, and hailed as a national hero, his most significant – and painful – duty in his later career was to sail to Mexico in the frigate Novara in 1867 to bring back the body of the so-called Emperor Ferdinand Maximilian who had been shot by the Mexican government of Benito Juárez.

But that’s another story

The first book in the Dawlish Chronicles Series features ironclad action in the Black Sea as the vicious Russo-Turkish War of 1877-78 reaches its climax.

Russian forces are driving  deep into the corrupt Ottoman-Turkish Empire.  In the depths of a savage winter, as the Turks face defeat on all fronts, a British officer is enmeshed and finds himself confronting enemy ironclads, Cossack lances and merciless Kurdish irregulars. And in the midst of this chaos, while he himself is a pawn in the rivalry of the Sultan’s half-brothers for control of the collapsing empire, he is unwillingly and unexpectedly drawn to a woman whom he believes he should not love.

Britannia’s Wolf is available in hard-copy and Kindle formats and if you’re a Kindle Unlimited subscriber you can read it, or any other Dawlish Chronicles novel, at any time, without further charge.  – click here for details.

Britannia’s Wolf It is also available as an audio book read by the distinguished American actor David Doersch. If you haven’t previously ordered an audio-book from audible.com you can download it without cost as part of a 30-Day Free Trial. You can listen on your Smart Phone, Tablet or MP3 Player.