Skip to content
Guest Blog: The Ambush of SS Persia, 1915

I wrote a blog article some time ago (click here) about two tragedies that happened on the same day, December 30th 1915. One was the loss by accidental magazine explosion of the Royal Navy armoured cruiser HMS Natal at Scapa Flow. The other was the sinking, by torpedo of the liner SS Persia in eh Mediterranean. The loss of life was heavy in both cases. Now a book has been published by Alan Wren (his details are at the bottom of this article) in which the loss of the SS Persia has been portrayed in detail. It’s the result of meticulous research. Alan has written a guest blog for me that describes the context of his work. I can do no better than send the reader directly to this excellent article.

It is a great privilege to be invited to write a guest blog for Antoine Vanner, doyen of British naval historic fiction through his ‘Dawlish Chronicles’. Despite his fame and success and my novice status, he has always been gracious and positive about my first venture into maritime history and I am truly grateful. It is uncanny that the most recent guest blog I read (Click to read) was about Jacky Fisher, written by Penelope, Fisher’s great great granddaughter who I mention in my first paragraph.

The Royal Navy was simply unable to defend its own ships and British merchantmen against U-boats on the outbreak of war in 1914 – no strategy, no tactics, no specific weapons – no training. Back in 1906, Admiral Lord Fisher had obsoleted many of the world’s battleships when HMS Dreadnought was launched – expensive but faster, higher firepower, longer range, more accurate, still capable of ruling the waves. Less than a decade later, he was one of the few who accepted that things had changed when he warned First Lord of the Admiralty Winston Churchill about U-boats, small, cheap, potentially very dangerous.

‘There is nothing else the submarine can do except sink her capture, and it must therefore be admitted that this submarine menace is a truly terrible one for British commerce and Great Britain alike, for no means can be suggested at present for meeting it except for reprisals.’

His wake-up call went unheeded, perhaps even ridiculed.  What were the consequences? 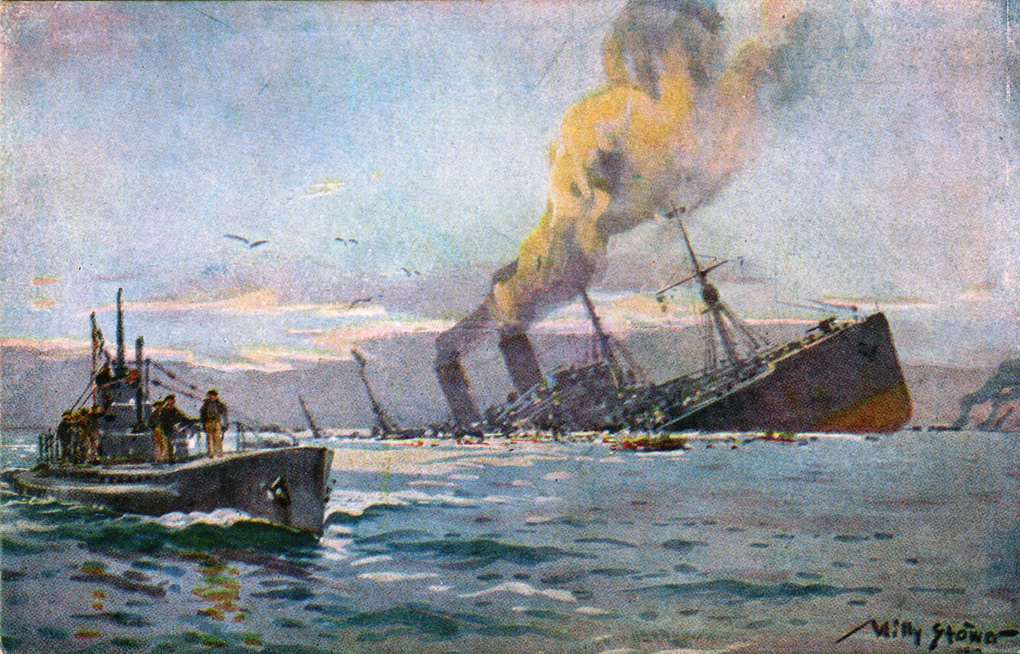 The lethality of the U-Boat came as unpleasant surprise to the Allies in WW1. Here renowned artist Willy Stöwer (1864 – 1931) shows a troop-ship sinking in the Meditrerranean

The Royal Navy would lose 6 ships to U-boat attacks in 56 autumn days of 1914, with 2,272 deaths. The mighty Dreadnoughts would spend much of the war hiding in Scapa Flow – too expensive and vulnerable to ignore the U-boat threat and far from ruling any waves. However, the navy had great success through the effective blockade of German ports, with a hotch-potch collection of old ships, crude but very effective. However, in 1915, Kaiserliche Marine U-boats slipped almost inadvertently into merchant raiding in waters around Britain, with frightening skill and success, sinking 750 ships including the RMS Lusitania with a death toll of 1,198, of which 128 were Americans. Another smaller but significant loss was the British SS Arabic, with the deaths of 21 crew and 18 passengers, 3 of whom were United States citizens, which irked President Woodrow Wilson already upset by the Lusitania tragedy. 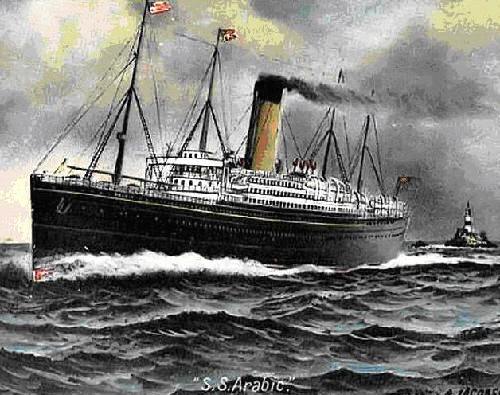 This latest attack triggered the ‘Arabic Pledge’ by the German government to secure the safety of non-combatants (particularly Americans) on board passenger liners, also backed by international law. Germany then ordered some U-boats to the Mediterranean, angering their commanders who saw their campaign as on the verge of critical disruption to British food supplies that could change the course of the war. Meanwhile, Britain had to keep its trade routes to the east open, enabling free passage of food, supplies and mail through the Suez Canal, while those who lived and worked in Egypt, India and beyond still needed travel and supplies both ways. 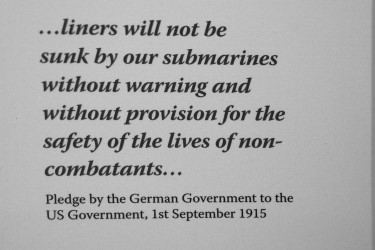 On 18th December 1915, P&O’s SS Persia slipped out of London’s Tilbury Dock, glided down the Thames and into the English Channel. Her crews had taken her through this departure many times since her launch fifteen years earlier and as the majority lived in India and Goa, heading out was a moment of celebration, of turning for home. However, this departure felt different for the London-based crew and their passengers, with Christmas Day one week away and U-boat anxiety shrouding their departure. However, stoicism held sway – work mattered, duty called and so she sailed on schedule. If threatened by a visible U-boat, she had a defensive gun, never fired in anger, but there, just in case.

She called briefly in Gibraltar, then turned north-east to Marseilles. Here, some better-off passengers could join after a channel crossing and train ride across France and cut four days off the journey, joining Persia on Christmas Day. Others took this short cut to avoid the risk of U-boats in the Channel and Western Approaches. However, by then, some of the most powerful U-boats were already active in the Mediterranean. Only six weeks earlier a U-boat had sunk the Italian liner Ancona after she had left Messines for New York, killing 282 of those aboard. The international laws of the sea, known as the Cruiser Rules, forbade the sinking of passenger liners without first giving them warning and allowing them time to safely disembark before being sunk, but those rules and the recent Arabic Pledge had already failed to protect the Ancona. Back in Marseilles, one prospective passenger with a large entourage arrived in Marseilles to board the SS Persia on Christmas Day, then changed his mind. He was the Maharaja Sir Jagatjit Singh Bahadur, GCSI, ruler of Kapurthala, who, on his travels, may have spent a million pounds on gemstones, jewellery, watches and gold bullion to take back to India. He claimed to have received information from ‘a secret source’ that the Germans were planning to attack the SS Persia. He and his retinue left the ship, but seemingly left his fortune on board under the supervision of a trusted advisor. 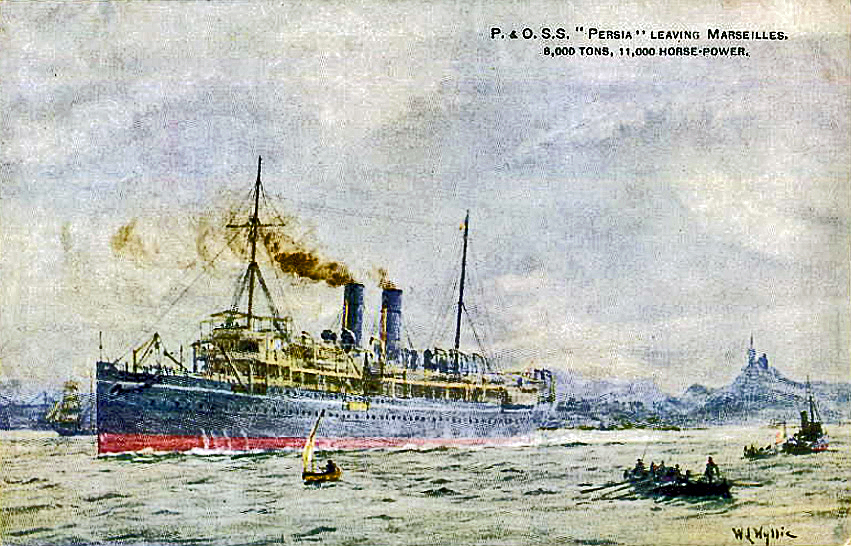 The SS Persia then departed for Valletta, her final stop before the Suez Canal. She departed at a time judged to ensure she did not pass through the narrow stretches of the Mediterranean during daylight when she would be more vulnerable to U-boats. This did not work. As passengers sat for lunch on Thursday 30th December, Persia was struck by a torpedo fired by the submerged U-38. She capsized almost instantly onto her port side while still ploughing through the waves at speed, sea flooding in through every orifice until she sank in around five minutes. Most of her lifeboats were smashed or jammed beyond use. Four boats were deployed and a fifth was severely damaged and barely afloat. The U-boat commander checked his successful attack through a periscope and turned away, still submerged, in search of further prey. A one-sided battle was quickly over and other battles for survival in Persia’s blackened flotsam were just starting. What had been the motivation for this attack on a passenger liner supposedly protected by international law and the pledge made by Germany after the Arabic? Francis Bacon is reputed to have observed that opportunity makes a thief and that is a component, but the root lay in vengeance.

How did I, Alan Wren, come to write a book  called The Ambush of SS Persia? 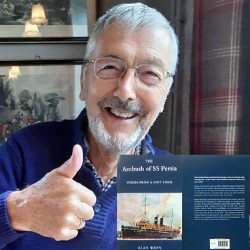 I live at Barton-on Sea, Hampshire. I left school to join the merchant navy as a deck officer cadet and learn the skills of navigation and ship handling, but found the education and training fell far short of that needed and eventually returned to dry land. Voyages through the Mediterranean and Suez Canal, across the Indian Ocean to Ceylon (Sri Lanka), eastern India and West Pakistan (Bangladesh) left indelible impressions that have influenced this story. I eventually went into computing, then in its commercial infancy, and I joined a major engineering company as a trainee computer operator and left as manager of their eventual major computer installation, central to the company’s operations. I then went on to a consultancy organisation in which my career evolved into international consulting and training in project management and systems design. Here, the foundations of success depended on thorough research to define problems and opportunities and then to design solutions and write the plans and words to bring them to reality. I became a scholar of Rudyard Kipling, always striving to specify the “what, why, when, how, where and who” of any change or innovation proposal. Writing was key. I eventually started my own consultancy business to run major projects in energy, pharmaceuticals, utilities and government departments.  But what has this to do with a book on the sinking of the SS Persia?

On a post-retirement day-out in 2015 I visited the Maritime Museum at Buckler’s Hard, Hampshire. Captivated by the museum’s display on the sinking of the SS Persia, I was left wondering why the sinking had happened. This ‘why’ question intrigued me and I asked at the museum shop if they had a book on the ship’s fate. The assistant wished they had – it seems that they were frequently asked the same question, but confirmed that no such book had been written.

I had become a published author in 2003, after Gower Publishing had invited meto write what became the ‘Project Management A to Z’. Although not a historian, I’m an incurable history-lover, but would this be enough? Deciding that it would have to be, I embarked on a new journey with SS Persia, little realising that, in her prime she could have sailed perhaps 30 to 40 return voyages between Tilbury and Bombay in the time that my research and writing would take. As I had found in my work life, research was enjoyable and fascinating but time-consuming, with numerous dead-ends and the burden of what to include and what to omit. It was also frustrating at times – authoritarian secrecy during World War I discarded much information and kept more deliberately concealed behind the Defence of the Realm Act. Throughout, I was hugely bolstered by help from The Honourable Mary Montagu Scott DL and Susan Tomkins at Bucklers Hard and by the enthusiasm of descendant relatives of those aboard the SS Persia who happily shared letters, documents and survivors’ accounts. It became a great way of making new friends. Eventually, discussions with a major publisher foundered because my text became too long – 96,000 words – uncommercial.

Rewrites and restructures later, I committed to a self-publishing route. Eventually, on the 30th December 2019, an anniversary of the sinking, I decided that the writing had to stop and the editing and proofing to begin. These efforts later collided with Covid, slowing the design and completion phases, but feedback from readers was encouraging. Mary Montagu Scott kindly offered to host a book launch and book-signing event at the Museum, a great opportunity to meet people again. However, Covid continues and such an event has had to be postponed sine die, though online approaches may be explored.

‘The Ambush of SS Persia’ appeared on 29th September 2020 and eBook versions will become available soon. Click on the cover image below for purchase details. 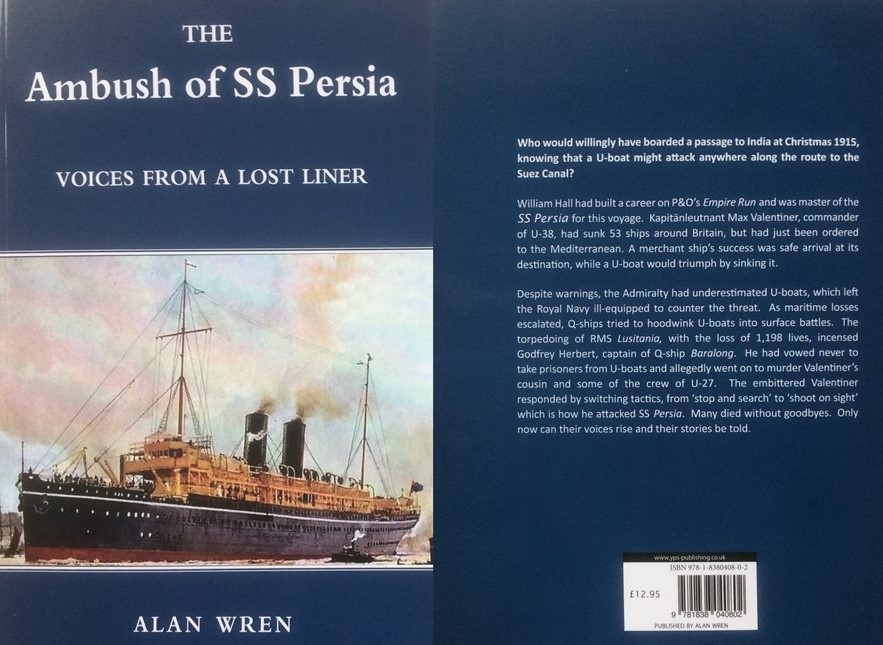