When thinking about war at sea in the Age of Fighting Sail one’s attention is immediately drawn to the ferocity of battle when ships engaged at close quarters. In actuality however combat was relatively rare but wreckage in stormy weather remained a constant – and exhausting – hazard at all times. One is indeed struck by the number of ships – and lives – that were lost without any intervention by the enemy. The Royal Navy was more vulnerable than those of other maritime powers since British strategy rested on keeping at sea – and dominating it – whether on close blockade of hostile coasts or bases, or cruising to destroy enemy commerce, or projecting force anywhere in the world, from the Caribbean to Java, from Egypt to Argentina. 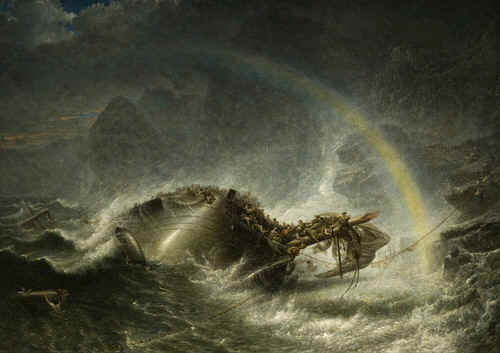 Keeping at sea did however mean inevitable exposure to extreme weather, in many cases with fatal consequences. For all the professional seamanship of ship’s officers and crews, sailing ships were, by their very nature vulnerable, and never more so than when forced towards a lee-shore. One example – a terrible one – of such a loss was that of HMS Sceptre in 1799. 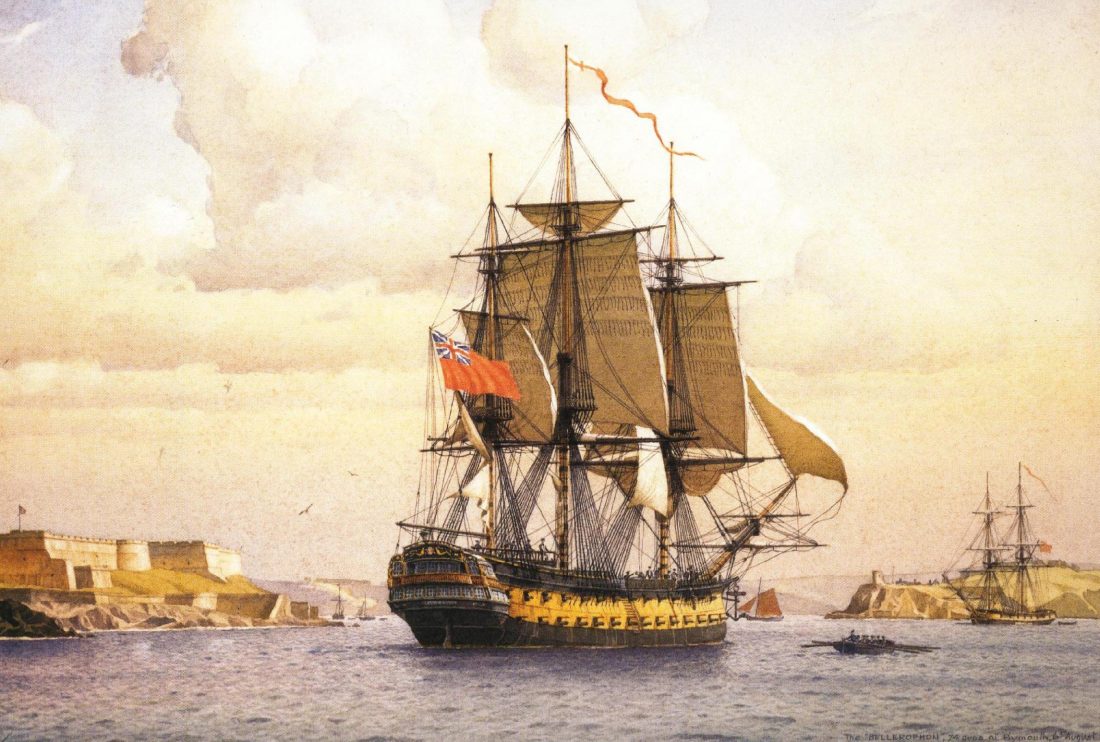 A third-rate, in this case HMS Bellerophon – HMS Sceptre would have looked generally similar

HMS Sceptre was a 62-gun third-rate ship of the line which had entered service in 1782, in time to participate in the Battles of Trincomalee and of Culladore, off the Indian coast, the last significant engagements of the Anglo-French was that had grown out of the American War of Independence. She was laid up until 1794 and on recommissioning participated in actions off Haiti and St. Helena. She spent a long time thereafter at Cape Town – captured from the Dutch in 1795 – and was described to have become “weak and leaky” there. 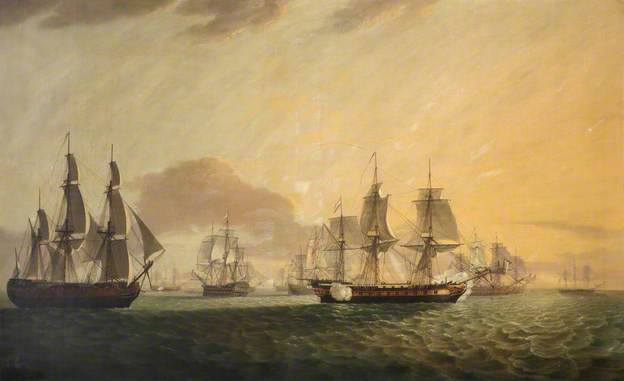 Notwithstanding her poor condition, HMS Sceptre returned to East Indian waters in early 1799, escorting a convoy and carrying an entire army regiment – the 84th – herself.  She leaked so badly in during one spell of bad weather that she survived only by pumping. On reaching Bombay she was docked and was strengthened by large timbers, known as riders, which were bolted diagonally to her sides fore and aft. That this should have been necessary for a relatively new ship indicated that the structure was in very poor condition. Now repaired, she set out on her return voyage, reaching Cape Town in late October. 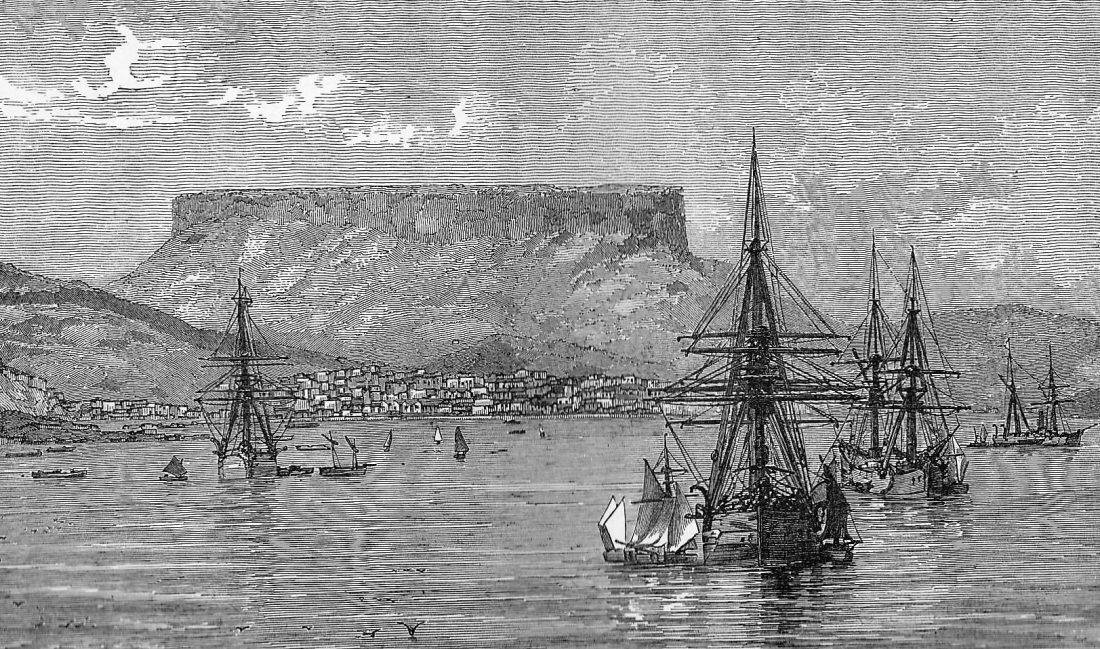 On November 5th, while moored in Table Bay, Cape Town, a strong wind began to blow from the North West – a direction against which the bay offered no shelter. No danger was anticipated however and flags were flown, and a salute fired at noon, to celebrate “Guy Fawkes Day”, commemorating the frustration of the Gunpowder Plot in 1605. By early afternoon however the wind was at gale force and the captain ordered topmasts to be struck (i.e. taken down) and the fore and main yards lowered to reduce drag.  Soon afterwards a mooring cable parted but another anchor was dropped, with two guns attached to increase its holding power. By early evening even this was proving insufficient to hold the ship and a boat was launched to cross to HMS Jupiter, a fourth-rate moored close by, to secure a cable to her. The waves were so violent however that the boat capsized and its crew drowned. HMS Sceptre was now helpless in a raging sea. No help could reach her from the land and officers who had gone ashore the previous evening could only watch helplessly. 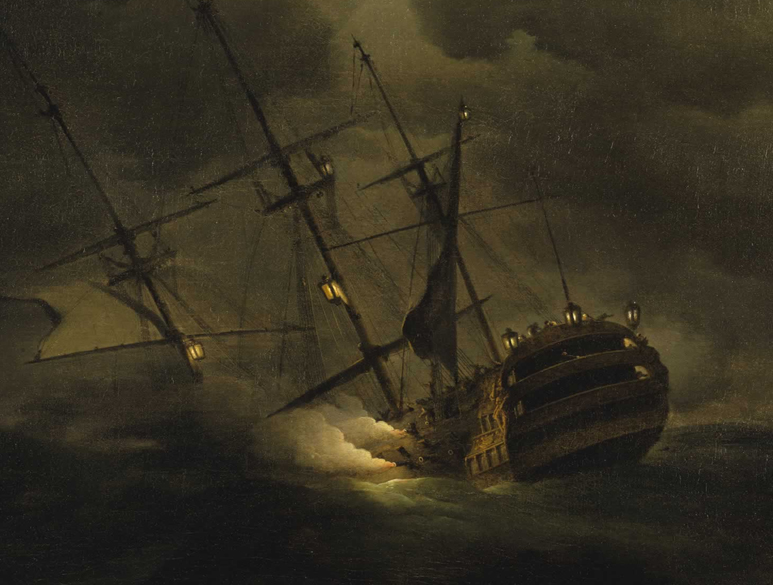 At eight in the evening, a new horror manifested itself, a fire below decks, its origin unclear. Dense smoke was rolling from the hatches in such volumes that it was impossible to go below to fight it. Two hours later the helpless ship drove on to a reef, broadside towards the shore and heeling to port towards the sea. The captain ordered the main and mizzen masts to be cut away and this was done – discipline seems to have been well maintained even at this desperate juncture. Lightened by the masts’ fall, the ship lightened and rose free from the reef, moving closer to the shore and giving hope that she might be thrown high enough upon the beach for all to be saved. 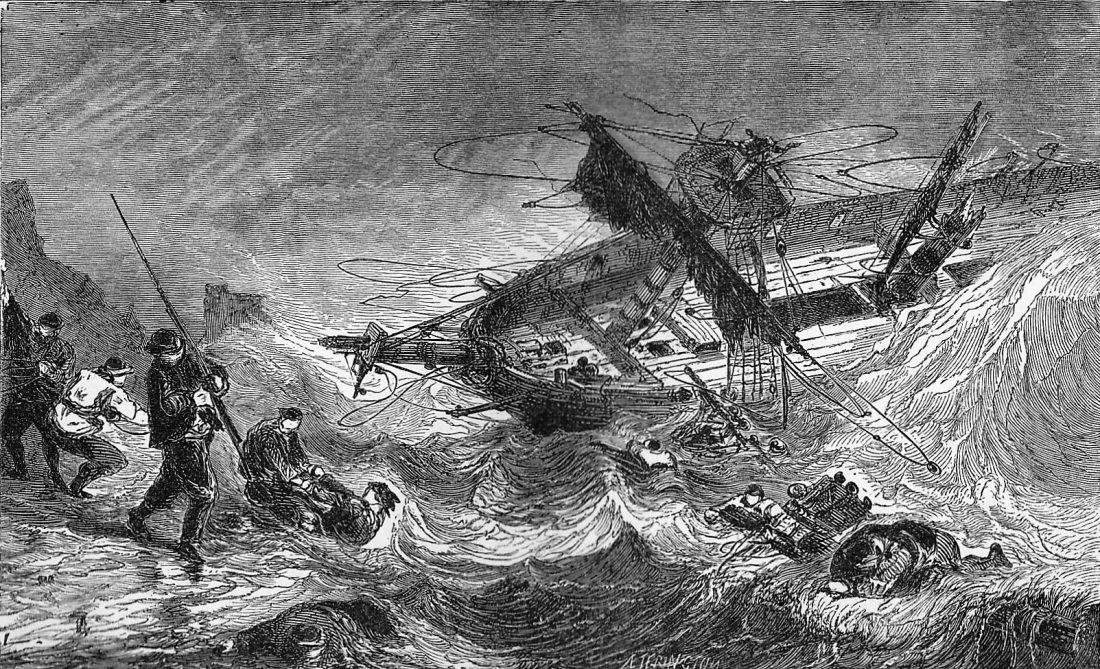 HMS Sceptre’s destruction as imagined in a 19th Century illustration

Hope turned to despair as HMS Sceptre began to break up, the port side collapsing and throwing large numbers of men into the water. The survivors clustered on the starboard side. Several jumped overboard and tried to swim ashore but were borne away on the seething eddies. The entire poop structure wrenched itself free and carried towards the shore, observers there estimating that seventy men or more were clinging to it. It never reached the beach, capsizing as a wave hit it and taking every man on it with it.  Worse was to come. The shattered hull was now heeled towards the shore, men clustered on it, but as a large wave hit it was lifted again, then smashed down, breaking into two sections just before the mainmast. The after section appears to have disintegrated immediately but the forward part lasted a little longer, with some forty men clinging to it as waves surged over them. Then it too collapsed into separate chunks of wreckage. 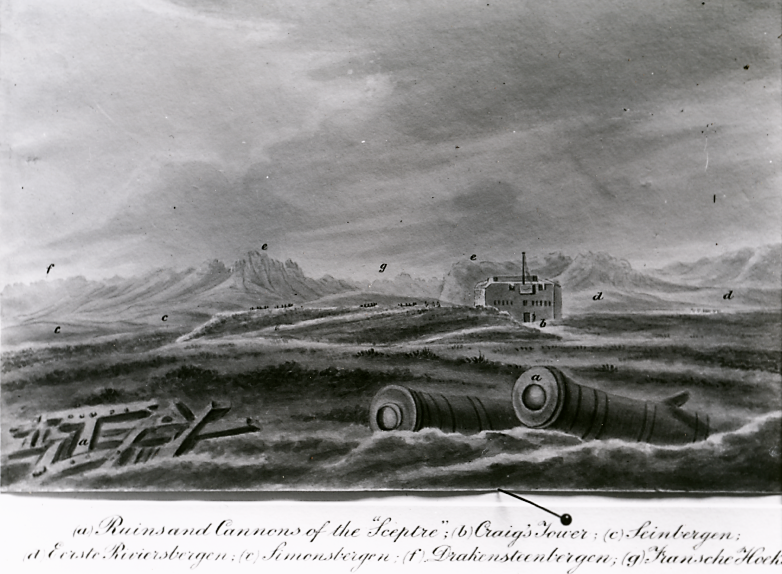 Guns and wreckage from HMS Sceptre thrown up on the beach
as drawn by a witness, Lady Anne Barnard

The tragedy was played out close the shore, so that the crowds that gathered there – townspeople, soldiers from the garrison – saw the horror unfold but found themselves powerless to help. Fires were lit to guide swimmers but many of them were killed by the churning wreckage as well as by drowning. Only a handful reached the shore alive and the next morning three wagon-loads of dead bodies were gathered for burial. The death toll, which included the captain, was horrific – 349 seamen and marines were killed or drowned. Of the 51 who reached the shore, nine were so badly injured as to die there.

One of the survivors of the disaster was “The Indestructible Admiral Nesbit Willoughby”, whose story has been told in an earlier blog (click here to read Part 1  and here to read Part 2 ). Then a lieutenant, he was lucky enough to be one of HMS Sceptre’s officers who were ashore and who were forced to watch from the beach. Thirteen years later this extraordinary man was to survive the horrors of the retreat from Moscow as a prisoner of the French. One cannot wonder whether he was lucky, by surviving these and other adventures, or unlucky in being an apparent magnet for danger!

The eighth of Dawlish Chronicle series is available in paperback and Kindle, and is available to subscribers to Kindle Unlimited  at no extra charge. It can be read in sequence or as a standalone.

Click on the cover image for details or to order

The Dawlish Chronicles – now up to ten volumes, and counting. Kindle Unlimited subscribers can read all at no extra charge. Click on the banner above to learn about the series.

Registering for the Dawlish Chronicles mailing list by clicking on the banner below, will keep you updated on new books and facilitates e-mail contact between Antoine Vanner and his readers. You’ll also get six free short stories to load on your Kindle or Tablet.