Blogging continued actively through the year, with two articles appearing most weeks. This was run in parallel with the writing of the Dawlish Chronicles novels – the latest of which, Britannia’s Gamble, was published in October, as well as provision of free short-stories for those who have signed up for my mailing list (details at the end of this article).

In the course of 2017 the platform for the blog was changed, integrating it with the www.dawlishchronicles.com website. The blog list since May 2017 can be accessed by clicking here.

I’ve picked out a dozen of my favourite blogs from this period and I hope you’ll enjoy them also: 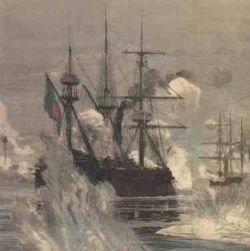 Gunboat Diplomacy: The Franco-Siamese War of 1893

A short and daring stroke by lightly-armed French warships proved to be one of the most effective instances ever of “gunboat diplomacy.” It resulted in Laos of being wrested from control by Siam – now Thailand – and brought under French rule. This blog article tells the story and puts it into the context of French colonial expansion in the last decades of the 19th Century. Click here to read.

Fire at sea has always been terrifying when it occurs, but never more so than in the days of wooden ships. Appalling losses were suffered from this cause and, in the absence of modern damage-control systems, fire brought for warships the extra threat of magazine explosion. It is therefore all the more heartening to learn about the salvation of a Royal Navy warship, HMS Magicienne, from such a fate in 1831, through a combination of cold calculation, iron nerve and superb discipline. Click here to read the Magicienne’s story

Ram bows were seen as essential features for warships of almost all sizes in the half-century prior to WW1. Such bows – extended forward underwater to end in a sharp point that could gouge deep into an enemy hull – were to prove a major hazard in peacetime. One of several disasters involved the French battleship Hoche in 1892 colliding with a passenger steamer. Click here to read what happened

In July 1917, Germany’s unrestricted submarine warfare campaign was entering its sixth month. In 31 days some 300 vessels of all sizes were to be sunk. In separate events the Royal Navy was to lose two large warships, together with almost 900 lives. The reality of war at sea was merciless and brutal, and the conflict still had sixteen months to run. Click here to read of these fearful losses

The name of Israel Pellew was overshadowed by that of his older brother, Edward Pellew, one of the most charismatic naval commanders of the Revolutionary and Napoleonic periods’ Israel Pellew was however to make the name of his own, serving with distinction at Trafalgar as captain of HMS Conqueror and achieving the rank of full Admiral. His career did however come very close to a dramatic termination in 1796 when in command of the 32-gun frigate HMS Amphion, which he had taken over the previous year. Click here to read what happened.

In 1710 a petition to Queen Anne from a Swedish merchant cast a horrifying light on the way in which crews of ship detained by the Royal Navy could be treated. The captain of the frigate HMS Fowey authorised brutal measures which a Victorian writer was later to classify as “ruffianism”. The incident gives a sobering insight to the realities of command at sea in that era. Click here to read about this unedifying case 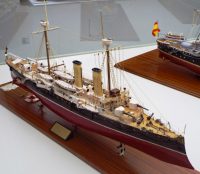 The disappearance of the Spanish cruiser Reina Regente, 1895

Disappearance without trace of ships at sea still occurs in our own time but was a more common happening before the days of radio allowed transmission of distress calls. Many such losses in the past were associated with poor maintenance and poor operational procedures of merchant ships.  Disappearances of naval ships were much less common, reflecting high standards of construction, maintenance, seamanship and discipline. One such loss – the modern cruiser Regina Regente – was however to be sustained by the Spanish Navy in 1895. Click here to read about this tragedy

Chile’s fleeting moment of naval superiority over the United States, 1885

The “Panama Crisis” of 1885 is forgotten today and indeed blew over quickly at the time. A potential confrontation with Chile highlighted the weakness of the United States’ “Old Navy” as compared with the Chilean “Elswick Cruiser” Esmeralda – the fastest cruiser in the world at the time. This embarrassing incident emphasised the necessity for the United States to build modern ships and create a “New Navy. Click here to read about this largely forgotten but significant incident

In 1846 a large trading junk, the Keyling, set out on a voyage that would make her the first Chinese vessel to round the Cape of Good Hope, sail to the United States and on to Britain. A visit to her in London in 1848 by the novelist Charles Dickens inspired him to write a viciously xenophobic attack on Chinese culture that did him little credit. Click here to read about her.

In the Revolutionary-Napoleonic era the greatest threat to a wooden warship’s survival came more from stormy weather than from enemy action, especially if it were to be cast on a lee shore, where it could be battered to matchwood. One such loss occurred in 1804 when a Royal Navy “74”, HMS Venerable, encountered disaster. The rescue that followed involved however courage, professionalism, leadership and skill of the highest order. Click here to read about this disaster…

The Raids of HMS Doris, December 1914

Soon after hostilities commenced between Britain and her Allies and the Ottoman Turkish Empire, a small, obsolescent, Royal Navy cruiser, HMS Doris, raided Turkish communications with impunity along the eastern coast of the Mediterranean. The climax came at the port of Iskenderun, known to the British as Alexandretta, where operations took on a surreal “Gilbert and Sullivan” aura. This article tells this bizarre story.  Click here to read of HMS Doris’s exploits

Two USS Wasps: Glory and Tragedy in the War of 1812

Two almost identical sloops-of-war named Wasp were to serve with distinction in America’s War of 1812 with Britain. Their lives were short, though packed with incident, but an identical fate was to befall them both. Click here to read more about this tragic pair

Blogging will continue in 2018 – that’s a promise!

Lucky enough to have been given a Kindle ?

The Dawlish Chronicles series now comprises six novels – with a seventh due in 2018, as well as short stories made available free to readers who sign up to the mailing list.  The novels so far are set in the 1870s and 1880s and are centred on the life of Admiral Sir Nicholas Dawlish (1845 – 1918) and his wife Florence (1855-1946).  The plots are set in locales as varied as Turkey. Paraguay, the United States, Cuba, Korea, Britain and the Sudan and are linked to real-life events and real-life personalities. Historian and novelist Joanne Druett has described Antoine Vanner as “The Tom Clancy of historic naval fiction” in view  of the attention paid to the technology of this age of rapid transition. Click here, or on the banner below, to  get an overview.